A Lesbian “Carol” for Christmas
As we approach the crest of film awards season frenzy, Carol, Todd Haynes’s adaptation of Patricia Highsmith’s 1952 novel, The Price of Salt, still in limited release, has captured the imagination of ... 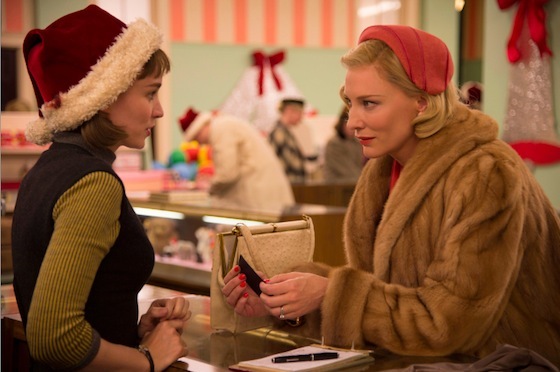 As we approach the crest of film awards season frenzy, Carol, Todd Haynes’s adaptation of Patricia Highsmith’s 1952 novel, The Price of Salt, still in limited release, has captured the imagination of critics like no lesbian-themed movie before it. Named best film of 2015 by the New York Film Critics Circle, it comes in at the top of both Film Comment’s and Variety’s film critics polls, leads in Independent Spirit and Golden Globe nominations, and has found favor among Oscar prognosticators. The word “swoon” appears with dizzying frequency in reviews, echoing the extravagance of the novel’s memorable last lines, which affirm the love of Therese for the older woman she had almost renounced: “Therese smiled because the gesture was Carol, and it was Carol she loved and would always love. … It would be Carol, in a thousand cities, a thousand houses, in foreign lands where they would go together, in heaven and in hell. … Therese walked toward her.”

Those lines, that ending, made lesbian literary history because they gave the book’s twilight lovers a chance. But mainstream praise for the film adaption neutralizes its queer romance when it insists that the particular pleasures Carol offers are universal. “Carol isn’t just a lesbian movie … [it’s] a classic American screen romance,” writes Andrew O’Hehir for Salon. Entertainment Weekly’s Joe McGovern regrets “the usage of simplistic language such as ‘lesbian romance’” to describe the film. The fact that “Carol is about a love story between two women,” he assures readers, “hardly limits the film’s thematic power to a same-sex point of view.”

These well-intentioned invocations of the film’s “universality” shortchange the queerness of its makers—not only gay director Haynes but lesbians including novelist Highsmith, producer Christine Vachon, and scriptwriter Phyllis Nagy—and the dedication of a production team with women in key roles.1 Their film delivers a sharper picture of lesbianism in the mid-century American imaginary than reviewers have been able to see. Edie Windsor, the successful plaintiff in the Supreme Court marriage equality case, remembers well that The Price of Salt offered something missing from the “classic American screen romance”—Haynes told me she complimented him at the film’s New York Film Festival screening on creating an ending she found even more hopeful than the book’s.

Completed more than a year ago and held by the Weinstein Company, first for a Cannes premier in May 2015 and then for a November opening in just four theaters in New York and Los Angeles, the film’s shrewd release plan earned it a spot at the top of the specialty box office during the season of “quality” films marketed for Oscar consideration. The film opens nationally on December 25, echoing its story of lovers who first meet during the Christmas shopping rush at a New York department store, when Carol (Cate Blanchett), a suburban Venus in furs, cruises Therese (Rooney Mara), a young shopgirl in a Santa hat.

Carol, set in a gray-green postwar Manhattan and in nondescript Midwestern motels and stretches of highway, is beautifully shot, often through rain-streaked windows, inspired by midcentury photos by Saul Leiter, Ruth Orkin, and Esther Bubley. Haynes conjures all his considerable creative powers to capture the fugue state of lovers as they come together, part, and come together again. But the queer perspective washed out by the glare of Oscar eligibility illuminates Carol’s take on lesbian film history.

The film’s emphasis on desiring looks exchanged between women draws upon yet revises tropes of lesbian representation from Hollywood film produced under the Production Code (enforced between 1934 and 1968)—which forbade “sex perversion or any inference to it”—and the art films that reacted to such prohibitions. For a start, Carol does not offer lesbianism as a pretext for sexual display for a male gaze, as did the recent Cannes Palme d’Or winner Blue Is the Warmest Color (2013). Rather, its drama of calculating and longing gazes is all about a lesbian point of view. Therese aspires to a career in photography, and Carol stirs her talent. Their sex scene, when it comes, two-thirds of the way through the movie, starts with a complex camera set-up before a mirror and continues with camera placements that offer intimacy while demanding attention to viewing perspective itself. Carol’s screenwriter, Phyllis Nagy, told me her confidence in Haynes’s sympathetic sensibility was clinched by the dinginess of the hotel room in which the sex scene was set. She didn’t want it to be glamorized. The deliberateness of the film’s final shots give the internal drama of the novel’s last lines—Therese’s confident stride into a crowded restaurant, Carol’s familiar gesture across the room, Therese’s smile when Carol meets her gaze—the impact of a money shot.

Rather than offer us psychologically rounded lesbian characters, the movie activates cinematic stereotypes for its own seductive purposes.

Yet Carol also refuses to offer a realistic picture of lesbianism. Viewers familiar with Haynes’s films, from the Barbie dolls of Superstar: The Karen Carpenter Story (1987) to the faux 1950s melodrama Far From Heaven (2002), would hardly expect that. Nor is its depiction of lesbians ahistorical or asexual. Some of its specificity and texture come from the much-loved source novel. The pseudonymously published, semiautobiographical The Price of Salt lacked the suicides and tragic renunciations of the lesbian pulp novels with which it shared bus depot paperback racks. The film adaptation preserves the lesbian looks and lust at the heart of the novel. Highsmith cruised the dyke bars of Greenwich Village and hooked up serially in artistic and society circles in New York and postwar Europe during and long after the “lavender scare” of McCarthy-era America. The paranoia that pervades her crime fiction also informs Carol’s plot of pursuit, wiretapping, and custody disputes, and the Waspy class fantasy that elevates Carol as love object gives Blanchett’s performance a creepy edge.

Rather than offer us psychologically rounded lesbian characters, the movie activates cinematic stereotypes for its own seductive purposes. At the heart of the romance is an intergenerational seduction fantasy. While the film renders this tastefully, there is no mistaking Carol’s kinship with predatory lesbians like Giovanna Galletti’s Fascist in Rome, Open City (1945), or Delphine Seyrig’s vampire in Daughters of Darkness (1971). As Richard Dyer notes, this type is commonly “shown positioned … behind the sexually indeterminate (i.e., she might go “either way”) woman … In this pose she appears to be trying to draw the indeterminate woman into her thrall, not by direct assault or honest seduction but by stealth.”2 Carol approaches Therese in just such a way. 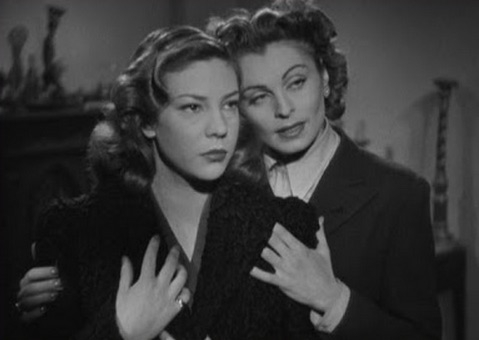 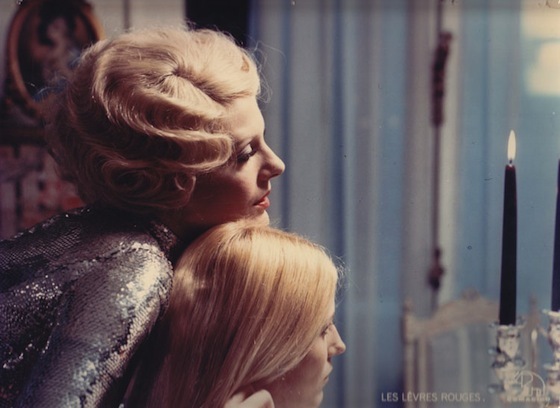 Delphine Seyrig and Danielle Ouimet in Daughters of Darkness 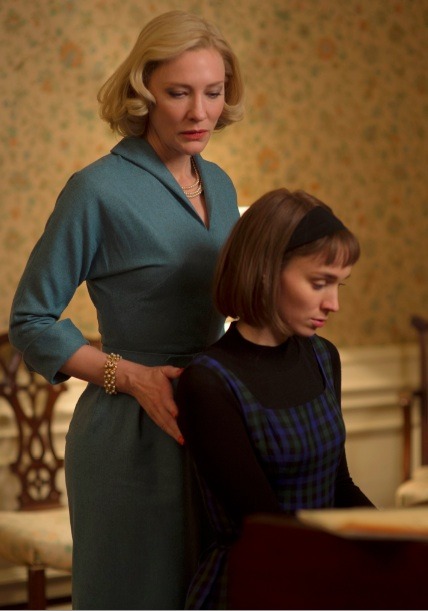 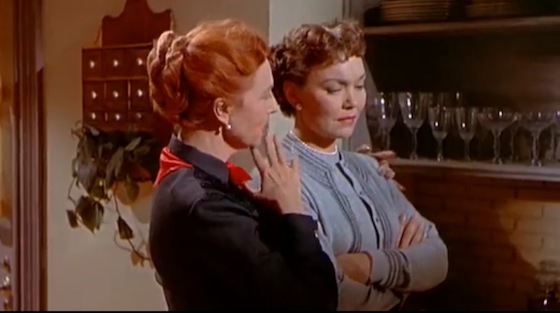 Agnes Moorehead and Jane Wyman in All That Heaven Allows 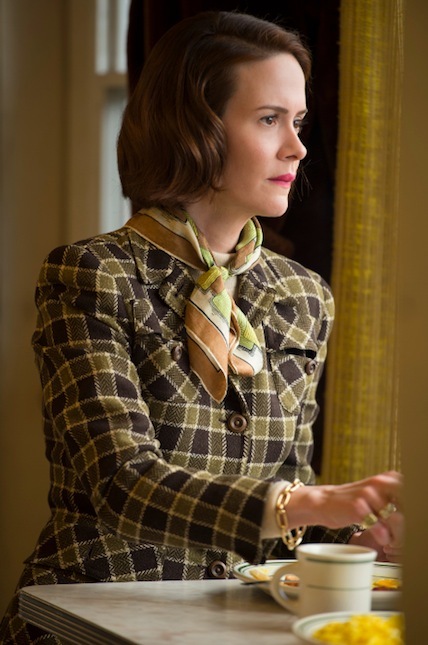 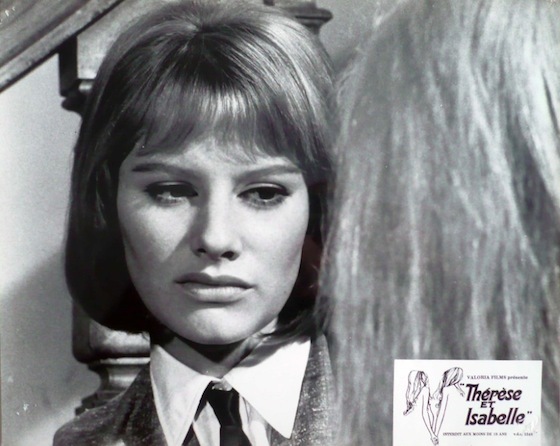 Essy Persson in Thérèse and Isabelle

Sure, “you don’t have to be a woman who falls in love with women to get swept off your feet by Carol” (Judy Berman in New York magazine), and the fact that Carol’s lesbians are not real lesbians is accentuated by the fact that the main characters are played by straight, white, high-femme movie stars, seductresses by profession. But many members of Carol’s intended audience really are lesbians, as are several of its key creative personnel. The movie captures “a same-sex point of view” on the seductions of cinema as no other film quite has, and its consciousness of itself as a representation is a crucial antidote to the politics of inclusion, visibility, and positive images that drive mainstream discourses of tolerance and earnest Tumblr feeds alike.