The Big Picture: “The Parliament of Bodies”
Since the 1980s and the AIDS crisis, queer communities have fought back against homophobia and transphobia using art and camp cultural production, alongside more conventional forms of political ... 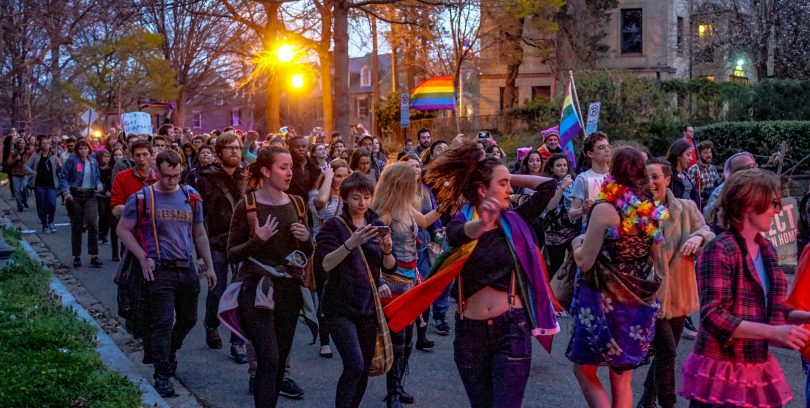 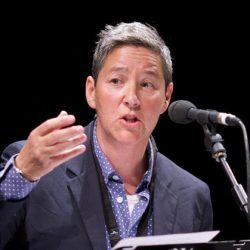 Since the 1980s and the AIDS crisis, queer communities have fought back against homophobia and transphobia using art and camp cultural production, alongside more conventional forms of political activism. In our present moment of global economic and environmental crisis, we seek new forms of intervention, new articulations of the political project, new ways of finding allies, and new structures of solidarity. This year, the documenta art festival offered one solution.

Just a month before the fateful US elections of 2016, Paul Preciado and the team from documenta convened their first Parliament of Bodies in Athens, Greece. Documenta is a massive and ambitious art show that happens every five years in Kassel, Germany. It stands in direct opposition to the art market and has an explicitly political mission. It was founded in 1955 and first dedicated itself to displaying work by artists whom the Nazis had denounced as “degenerate.” With a foundation in anti-Fascist politics and an orientation this year towards queer and transgender art, documenta crafted a response to the onslaught of new forms of right-wing populism and the documentation of Europe’s refugee crisis. For the first time it took place in two sites: Kassel, as usual, but also in Athens, Greece—a highly politicized place, especially in the German imaginary, and the site of fierce queer and anarchist opposition to austerity measures. The Parliament of Bodies, which met regularly for one year, staged lectures, performances, activist meetings, and wild and loud discussions. In so doing, it presented a model of how to combat new forms of extreme capitalism and the rise of fascist movements through thought, play, activist interventions, and alternative models of the political.

And then came Trump, as if summoned out of the ashes of utopian dreams. He stood for the rapacious greed of global capitalism and the imminent crisis of environmental decline on the one hand, and the unmoored orientation of right-wing backlash against refugees, the disintegration of the traditional family, and the rise of economic disparities globally on the other. Fighting Trumpism, or the consolidation of new forms of fascism that espouse white supremacist policies disguised as economic populism, requires that progressive groups address more than their obvious constituencies, and that they find ways to talk to massively exploited but under-educated populations. It also requires that we think beyond the identity politics of an earlier era and recognize the ways in which LGBTQ communities are sometimes targeted but at other times embraced by right-wing politicians seeking a broader base.

When democracy itself is the source of political chaos, we must look to the many bodies that are neither represented nor counted within democracy.

The truth—if one can use such a word anymore—about Trump is that there is no unifying principle that defines his approach to the world, to politically hot-button issues, to the economy, to health care, to the politics of sexuality. The only constants are an unremitting orientation to white supremacy on the one hand and an undying commitment to protect wealthy corporate interests on the other. Within these parameters, Trump will say and do anything to enhance his corporate interests and preserve his white identity politics. Accordingly, LGBTQ issues, for Trump, fluctuate depending upon the day of the week, the topic of the hour, and the last person with whom he spoke.

Trump on LGBTQ issues is like Trump on anything—today he is pro queer, tomorrow he will kick transgender people out of the military, the day after he will endorse gay marriage, and next week he will mention all the great drag queens he knows. This is not policy, or the hallmarks of a serious, ideologically committed politician. Instead, it is a mishmash of opinions, personal connections, spontaneous feelings, and clumsy attempts to politically locate himself.

At the Republican convention in July 2016, talking about the Orlando nightclub shootings of 49 (mostly gay) men, Trump pledged to “protect our LGBTQ citizens from the violence and oppression of a hateful foreign ideology.” The real subject of this sentence, of course, is not actually the protection of LGBTQ people but the defense against “foreign ideology.” He used the horrific event as leverage to push his extraordinary notion of a ban on Muslims entering the country.

Candidate Trump also invited Caitlyn Jenner to Trump Tower and told her she could use any bathroom she liked, and he expressed a live and let pee attitude to the question of transgender bathrooms. But then, six months later, in February 2017, the newly inaugurated president, in a clear and not subtle ploy to appeal to part of his conservative base, reversed an Obama-era directive allowing transgender students to use the bathrooms in which they feel most comfortable. Instead, Trump sent the issue back to the states to decide on how to tackle the issue.

In August, Trump announced his intention to ban transgender people from serving in the military, citing the burden of carrying the health care costs of sex reassignment surgeries as part of his rationale. Again, the initiative seemed to be as much about opposing his predecessor’s policy (Obama had opened the way to having transgender people serve openly in the military) as it was about animus towards transgender soldiers. 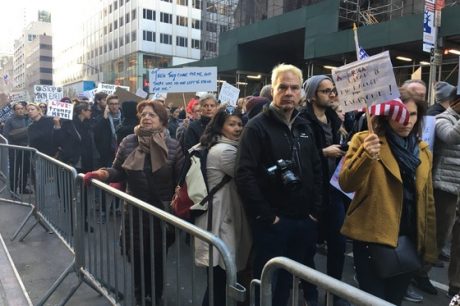 The Art of Protest

Trump’s flip-flopping set of positions on protections for LGBT people do not fuse into a coherent policy, a clear position, or even an obvious statement of homophobia or transphobia. Trump has no particular stand on LGBTQ issues—if it serves him to offer protection, he will. If it serves him to withdraw protection, he will. If he listens to a gay or transgender friend one day, we will see progress, if he meets with Christian conservatives another day, we will be back to square one. And, as the case of Caitlin Jenner’s support of Trump shows, LGBTQ people themselves are not united in their total opposition to Trump. Indeed, by some estimates 14 percent of the LGBTQ population voted for him. While 14 percent might strike some people as a negligible number, that number is likely a very low estimate, given there were surely many stealth votes that went unrecorded by pollsters. The fact that there is a small but wealthy group of gay “Log Cabin Republicans,” who vote for their economic interests over any desire to combat homophobia, speaks volumes about the splintering of the queer vote.

In a revealing article in July of this year in The Washington Post, journalists Robert Samuels and Jenna Johnson surveyed the many and contradictory positions that Trump has taken on LGBTQ issues and defined them as “transactional.” In addition to the on-again, off-again support/opposition he has shown to transgender youth and transgender soldiers, Samuels and Johnson also list Trump’s well-documented friendship with closeted gay attorney Roy Cohn (who makes a heralded appearance in Tony Kushner’s Angels in American as a bigoted gay man), his support for AIDS funding, and his donations through fund-raising events to AIDS research. In addition, they claim, Trump has offered support in the past for civil protections for LGBTQ people and for gay marriage. And finally, on his TV show, The Apprentice, Trump expressed support for gays in the workplace. In fact, on one show in 2005, he recommended hiring gay men because, especially in the fashion and modeling industries, gay men could be counted on not to sexually harass the talent!

Samuels and Johnson report that Trump had a conversation with a gay contestant on The Apprentice in which he asked whether the contestant was gay. When the man responded affirmatively, Trump responded with a shrug: “I like steak, someone else likes spaghetti.” As we grapple with the analogies here—women are to steak as gay men are to spaghetti—we come to the heart of Trump’s position on LGBTQ: it changes as the wind blows and will likely continue to change over the coming years.

Now more than ever, we hope that art can lead us through the political toxic waste and offer imaginative answers to some of our most pressing concerns: environmental ruin, domestic terrorism, racism, police brutality, and political repression. While Hollywood gives us only poor attempts at allegories—Mother! But also maybe It?—we need to look elsewhere for help in assessing and opposing the politically complex moment we are in. While Trump stands for, and was elected in relation to, a media-obsessed world in which audiences for even political events want entertainment over substance, we need to rethink the function and form of art and identity.

We hope that art can lead us through the political toxic waste and offer imaginative answers to some of our most pressing concerns.

Returning then to documenta, perhaps there is some hope in the Parliament of Bodies, which described itself as a response to the refugee crisis in Europe, and which, the curators proposed, “revealed the simultaneous failure not only of modern representative democratic institutions but also of ethical practices of hospitality.” They continued: “The real Parliament was on the streets, constituted by unrepresented and undocumented bodies resisting austerity measures and xenophobic policies.” Notice the way the problem is stated here—the curators do not name fascism per se as the problem, but “modern representative democratic institutions”—after all, Brexit was the result of a popular referendum and Trump was democratically elected. When democracy itself is the source of political chaos, they propose, we must look to the many bodies that are neither represented nor counted within democracy: not simply LGBTQ people but “unrepresented and undocumented bodies.”

The Parliament of Bodies scheduled events under the title of “exercises of freedom” and created a number of “societies” that were not divided by identitarian missions, but instead were united by their oppositional goals and used the terminology of friendship and affiliation. For example, there included “the Society of Friends of Sotiria Bellou” (developed with AMOQA, Athens Museum of Queer Arts), dedicated to the proliferation of queer and transfeminist politics; and the Cooperativist Society (coordinated with Emanuele Braga and Enric Duran), working on circular economy (or the commitment to recycling and using resources for as long as possible rather than creating mountains of waste) and “communing.”

As this list shows, the real work of the real parliament, the parliament of friends, in the streets and in open rebellion against racial capitalism, is ongoing in locations beyond the university, beyond Congress, beyond the museum, beyond traditional media that rushes in to report on and benefit from the latest crisis. We need intellectual experiments such as the Parliament of Bodies if we are to think our way out of this crisis and the ones that will inevitably follow. We need to talk—not just to each other, but to and with the random and improvised societies that pass through the parliament of bodies, searching for new forms of being social, doing the political, queering life as we know it. Find your parliament of bodies, convene it, talk, listen, learn, live. 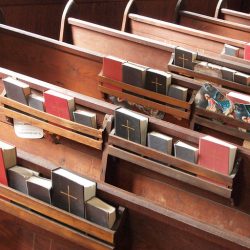