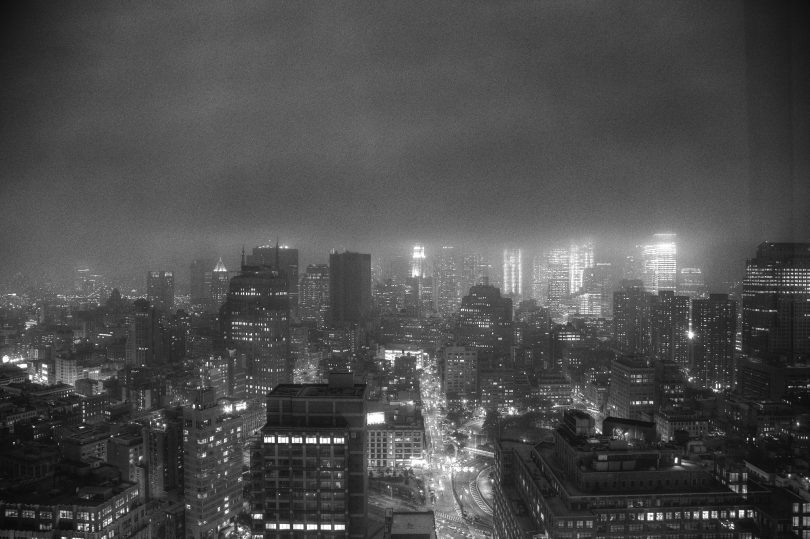 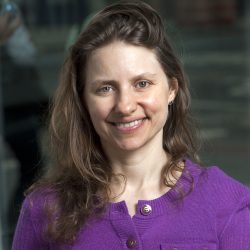 The lobby of the Grand Hyatt Hotel in midtown Manhattan, right next door to Grand Central Terminal, presents a generic corporate luxury—an aesthetic of high ceilings, sleek fountains of black granite, dark wood pillars. As a reporter for the New York Times wrote in 1980, shortly before the hotel opened, the glass-wrapped exterior looks like “an out-of-towner’s vision of city life.”

The Hyatt, built in the late 1970s, was Donald Trump’s first foray into Manhattan real estate. The Hyatt rose on the former site of the Commodore Hotel, a brick midtown landmark which had opened in 1919. Owned by the Penn Central Railroad, the hotel fell on hard times along with the railroad, which went bankrupt in 1970. It became seedy and unkempt, and stopped paying property taxes. Like the city as a whole at that time, the Commodore seemed about to collapse.

In The Art of the Deal, his ghostwritten autobiography, Trump writes that at the very moment when New York City looked like it might go broke, he looked at the stream of suburban commuters on 42nd Street and saw a hotel rising from the ashes. For Trump, this story stars himself as dealmaker, but there is another way to see it: Trump’s rise was possible because of a new regime coming into existence in the city, one that would privilege the private sector over the public, the needs of business above those of citizens.

Long before his election last November, Trump’s career depended on a new system of urban governance, one which emerged in the 1970s as the Great Society faded and as deindustrialization ravaged cities. According to this vision, city governments must direct public resources to winning private investment, since only this can boost the property tax revenues that governments need to function. In an age of retrenchment, only business seems to have the power and the wealth to make a difference.

The rise of Trump in New York City cannot be separated from the broader political culture that attacked public institutions and embraced naked self-interest.

This faith has helped over time to both support and generate rising inequality within cities, and to speed the hollowing of the public sector itself. In New York and elsewhere, it has taken shape with the active support and participation of urban liberals—many of whom, after all, have done very well in these new cities. Trump may have owed his election last November to the votes of white working-class people in swing districts, as well as, more deeply, the allegiance of a much broader group of middle-class and affluent Republicans. But if we look back a few decades, we can see that his emergence in public life is inextricably tied to a shift in the nature of American cities, and their deepening orientation towards the needs of real estate and finance.

Trump was a young developer at the time that the Commodore was falling into disrepair. He was eager to break out of the outer boroughs, where his father had built the family wealth by building and renting apartments to working-class families. The Trumps’ was a segregated housing empire; the Justice Department sued Trump Management for racially discriminating against potential black tenants in 1973, following years of careful documentation by housing activists. The landlords settled the case and agreed to take active measures to desegregate their properties, while continuing to insist that they had done nothing wrong (later, the Justice Department would charge that the Trumps had failed to abide by these terms).

The junior Trump had been eager ever since the late 1960s to get into the world of Manhattan real estate. By the mid-1970s, New York City as a whole teetered on the edge of bankruptcy. The sources of its problems were deeply rooted in the political and economic contradictions of the postwar years and of New Deal liberalism. These contradictions included the limited tax revenues available to cities and the scant room that New York had to maneuver in determining its own tax structure given its dependence on Albany; the deindustrialization and white flight that was facilitated by federal policy and which plagued New York as so many northeastern and Midwestern cities; the history of racism and poverty that drove the city’s politics.

But its fiscal crisis quickly became a referendum on the very status of the public sector in the city. For much of the postwar years, New York had operated a remarkable social welfare state with more than 20 municipal hospitals, free tuition at the city university (CUNY), a vast system of cheap public transit, and a network of libraries. When the banks that had long financed its debts got jittery and ceased to do so in 1975—themselves responding to a changing legal climate that offered banks a plethora of new and profitable investment opportunities—the city’s ability to provide these extensive social services came into question. 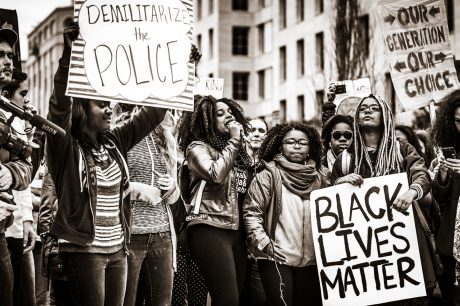 In The Art of the Deal, Trump chronicles the redevelopment of the Commodore as a narrative in which he was able to brilliantly manipulate a near-bankrupt city and its frightened banks into giving him a major tax break: “the city’s desperate circumstances became my biggest weapon.” Trump promised to buy the Commodore and redevelop it along with the Hyatt Corporation—but only if he could get a massive property tax break that would enable him to win the financing to make it happen. In the end, through a complicated set of legal arrangements, he wound up being able to get property tax abatement—as of 2016, worth upwards of $360 million for Trump and Hyatt—even as the city laid off thousands of teachers and police officers, fire fighters and sanitation workers; defunded day care centers; closed hospitals and clinics; and began to charge tuition at CUNY.

But Trump’s vision of himself as a lone operator challenging city government manages to elide just how eager city officials were to showcase the Commodore deal. Did the city object to Trump’s terms? Not at all. On the contrary, city officials celebrated the Grand Hyatt Hotel—and the tax financing that went into it—as a way of showing the broader business community how much had changed in New York. As the city’s economic development administrator put it, the arrangement was meant to send a “signal to the business community that there has been a change.” Or as Governor Hugh Carey said when the ground was finally broken on the project, “New York in the past had failed to give business the kind of incentive and support it needed to flourish, but that day is past.”

This new order, one embraced by the city’s liberal politicians as much as firebrands on the right, sought to make cities into engines for wealth, rather than prioritizing social needs and the public institutions that can make possible the flourishing of a democratic culture. The justification is always that, in an age of federal cutbacks, the only way to garner public revenues given the limited options available is by encouraging private economic development.

At the very moment when New York City looked like it might go broke, Trump looked at 42nd Street and saw a hotel rising from the ashes.

But it’s far from clear that turning city governments into one-stop-shopping centers for corporations actually winds up helping city-dwellers much in the end. In New York, Trump’s deal was only the beginning. To this day, New York City gives billions of dollars worth of tax abatements to businesses annually—despite the lack of clear evidence of these benefiting New Yorkers. Reporters such as Charles V. Bagli have documented the bidding wars that banks such as JPMorgan Chase, Goldman Sachs, and BNY Mellon have been able to foster between New York and New Jersey, each of which ply the financial firms with subsidies to stay. The American International Group kept on raking in its tax breaks from New York City even as it was getting a federal bailout for $180 billion in the wake of the 2008 financial crisis. On the national level, Amazon has literally opened a national bidding war: asking for offers for the best package of aid, promising tens of thousands of jobs and billions of dollars in investment to the locality that provides the best deal. And journalists such as Louise Story have told the stories of cities and states that fell over themselves with offers to firms such as General Motors—only to have the company move on and close its factories after a few years.

City politicians may believe that they have no alternative but to please businesses that will otherwise depart—that the real impetus for change must come at a higher level of government, such as federal regulations or taxes that would lessen the power of such incentives. But this does not quite capture the specific history that led to Trump’s emergence, and the capitulation of liberals to a vision of the city as a grab-bag of amenities for the elite: fancy shopping districts, expensive wine-bars, a two-tiered and racially segregated public school system sharply divided between the “good” and “bad” schools, condos and co-ops that push out the poor.

The rise of Trump in New York City—as in the country as a whole—cannot be separated from the broader political culture that made his ascendance possible: the attacks on common, public institutions; the embrace of naked self-interest and enrichment as the highest social goals; and the underlying pessimism and cynicism that present tax breaks for wealthy developers and international corporations as somehow in the interests of us all. For urban liberals, especially in New York, the blame for his presidency cannot be shifted to the hinterlands, the coalfields, the swing districts of Pennsylvania and Wisconsin. It’s necessary to look within, at the glittering, unequal city that Trump built with their support.