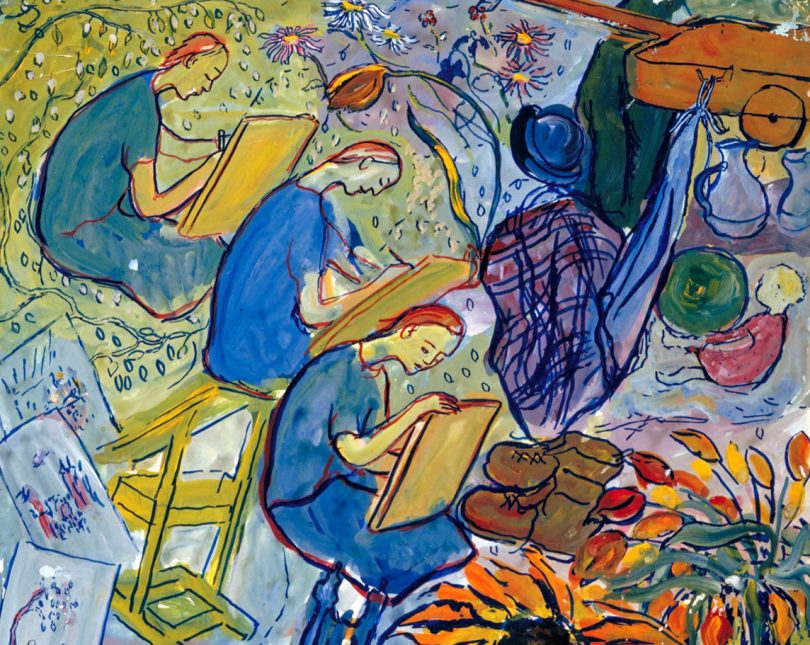 Charlotte Salomon’s short life was haunted—by the rise of the Nazis, who ultimately took her life, but also by her family’s history of severe mental illness. Salomon’s attempt to make sense of this history—and of the role of art in the face of both despair and genocide—is found in her major work, Life? or Theater? A work of almost 800 sequential paintings, Life? or Theater? is arguably one of our most important graphic narratives, and yet until recently few people have had the opportunity to read it in full. The Jewish Historical Museum in Amsterdam recently exhibited the complete work for the first time, and now Overlook Press has produced a gorgeous English-language edition of the complete series that will make the work more widely accessible than it has ever been.

Salomon began this remarkable work on the run, after Kristallnacht forced her father and stepmother to send her, then aged 22, from Berlin to her grandparents in the south of France. They believed she would be safe there, but even before the Nazis found her and took her to Auschwitz, Salomon was already no stranger to tragedy—or torment. Her mother had died from influenza when Salomon was a child. Or so she had been told. In France, she discovered that her mother had actually committed suicide. The disclosure arose as she witnessed her grandmother in the grips of a suicidal depression, one that in fact resulted in her suicide.

Salomon’s grandfather blamed her arrival for her grandmother’s illness and ultimate death, and in his bitterness he revealed to Salomon the long-held family secret of severe mental illness and suicide. In addition to Salomon’s mother and grandmother, the family had lost Salomon’s aunt, great uncle, great aunt, and who knows how many others to untreated suicidal depression. The grandfather cruelly promised Salomon that she would be the next to succumb. 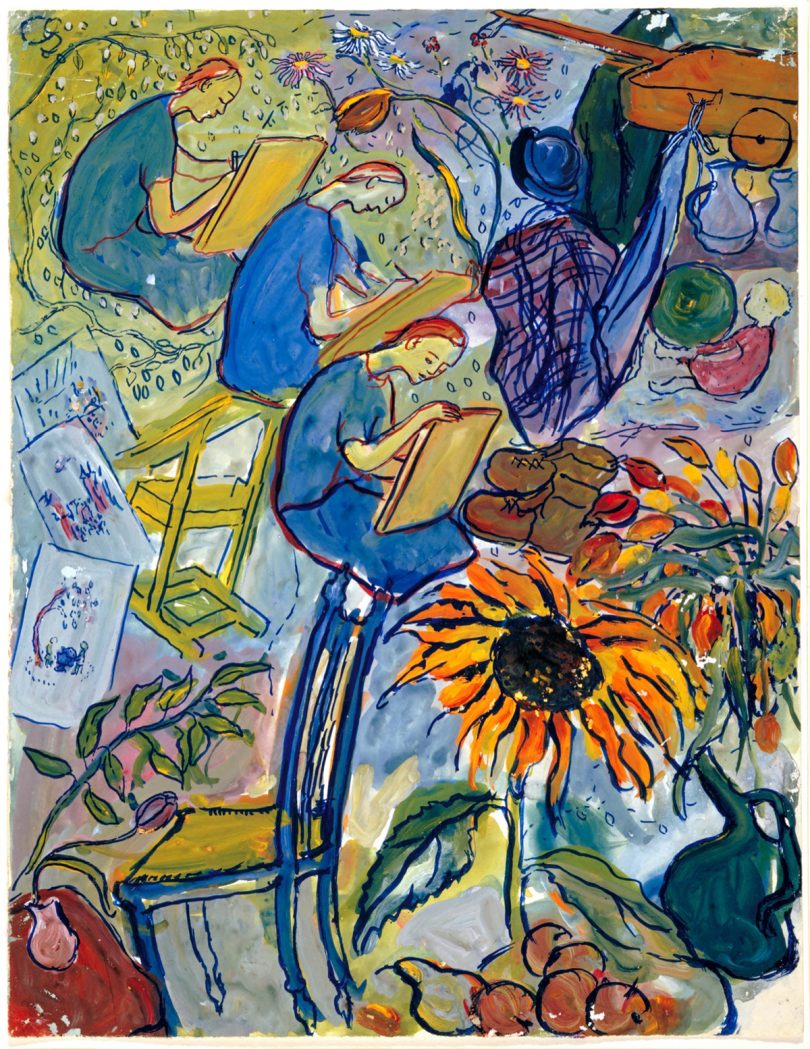 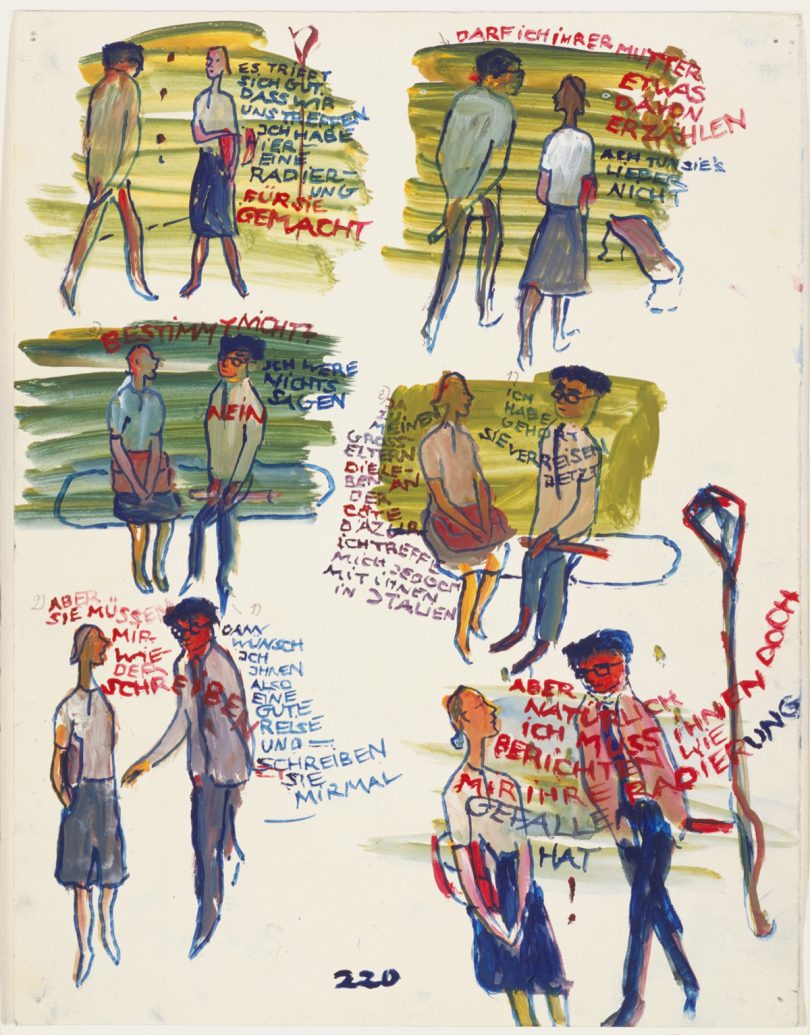 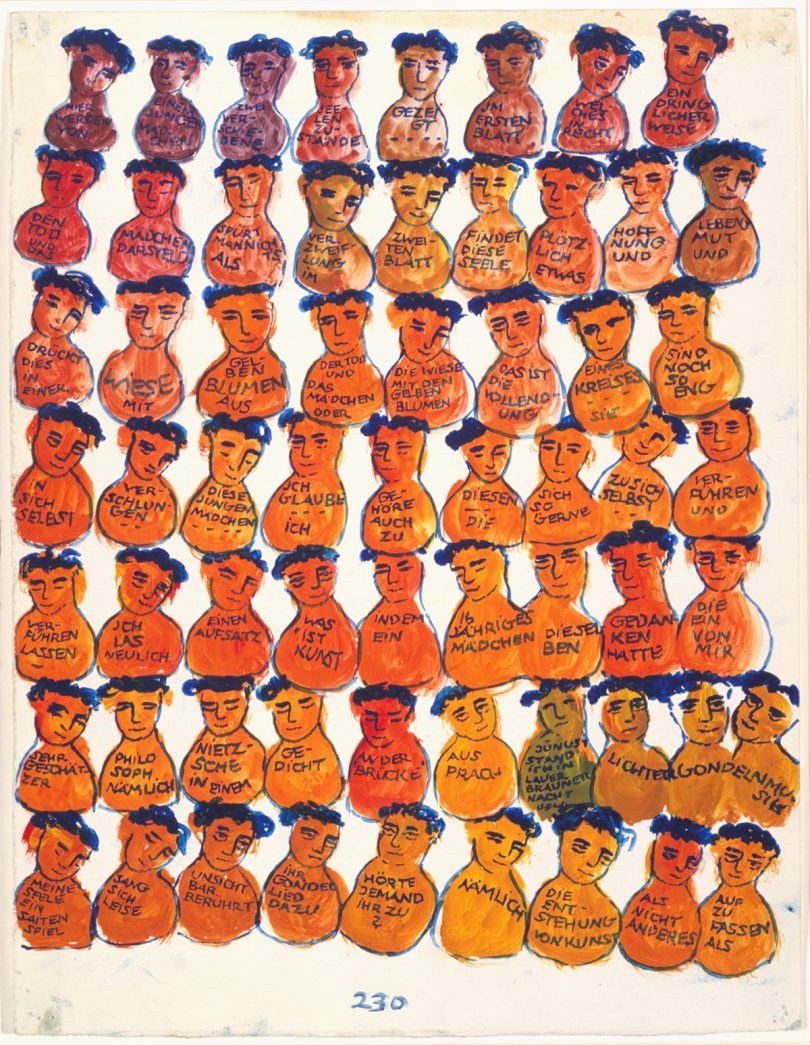 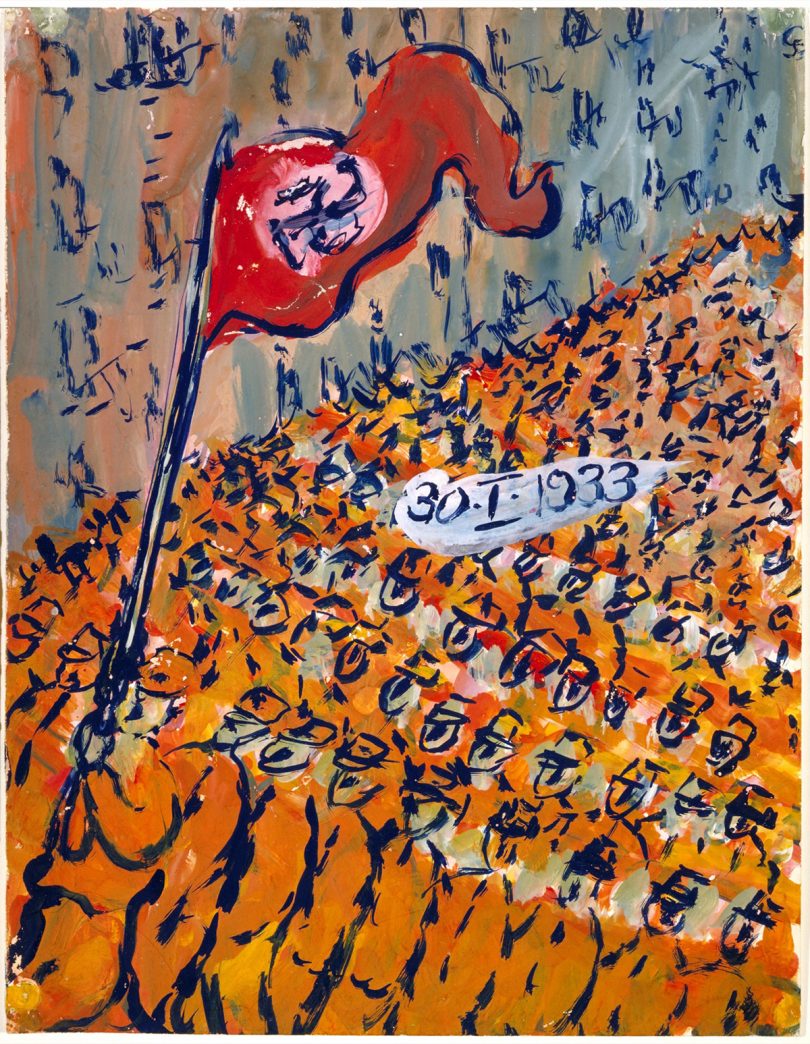 It is this bilious prophecy from the man who would become her tormentor that serves as the catalyst for the production of Life? or Theatre? A confession included in a final letter from Salomon to her mentor (published in full for the first time in this edition) suggests that she would murder this grandfather, after his longstanding psychological abuses began to be accompanied by sexual abuse as well. Just a few months before her own murder at Auschwitz, she apparently followed through on her suggestion with Veronal, a barbiturate used frequently by victims of the holocaust to end their own lives.

Ultimately, Salomon’s use of the drug to end the life of her tormentor even as her own life was drawing to its close was a desperate act of refusal of the suicidal despair her genetics bequeathed her. Life? or Theatre?, completed before this act of destruction, was her triumphant “no” to the prophecy of violent death, even as the gas chambers of Auschwitz awaited.

Despite the deep tragedies that marked Salomon’s life, readers coming to Life? or Theatre? in search of either a holocaust narrative or a narrative of mental illness will likely be disappointed. The book is certainly the product of the double haunting of its author’s young life, but its primary concerns are instead art, ideas, and love, those things that Salomon thought might liberate her from the looming fates of suicide and genocide.

The semi-autobiographical work does open with the 1913 suicide of the woman who would have been our protagonist’s aunt, the melancholy sister of Salomon’s mother, and its first act proceeds to offer many details of the family’s struggle with mental illness. Clearly, part of the initial motivation to create Life? was a desire to share openly the story of depression and suicide, which powerful stigma had kept buried, and to memorialize the lived lives of the many women in the family who had succumbed to the disease. And the rise of Hitler and the fate that Salomon knew awaited her are mentioned, however briefly. But the bulk of the book belongs to the two great loves of Salomon’s life: her stepmother, Paula Lindberg-Salomon—a famous contralto singer whose popularity allowed her to continue to perform in Berlin as late as 1937—and her stepmother’s voice teacher, Alfred Wolfsohn.

“Life? or Theatre?” is the work of a master graphic storyteller in addition to a brilliant expressivist painter.

Indeed, much of what the edition identifies as the “Main Section” of the work is given over to Wolfsohn (named “Daberlohn” in Life? or Theatre?), who struggles with the writing of his great work while pining hopelessly for the out-of-reach Lindberg-Salomon (Paulinka in the book) and seducing her stepdaughter, Charlotte. Charlotte herself seems to vanish as the protagonist of the work for long stretches, as Daberlohn—whose portrait is rendered sometimes dozens of times in a single painting—offers extensive theories of art, philosophy, spirituality, and passion. The pleasure Salomon takes in painting his portrait is matched only by the meticulous rendering of his words.

But for all the undying love Salomon maintained for Wolfsohn, long after their separation (it was to him that she wrote her confession following the murder of her grandfather), he does not escape unscathed from Salomon’s insights into the weaknesses of all her characters, herself included. She captures brilliantly Wolfsohn’s arrogance and his carelessness in his flighty pursuit of the younger Salomon, just as she captures her own desperate insecurity and immaturity. Nonetheless, he remains the one who, along with her stepmother, opened up the world of art to her, and he alone was the one who first saw her talent and encouraged her to embrace the life of the artist. Her work is in many ways a love letter, completed even as she was pregnant with the child of Alexander Nagler, a fellow refugee, and facing almost certain death in the concentration camps, an extended repayment of that rarest of gifts: Wolfsohn’s faith in her as an artist.

As a painter, Salomon bears similarities to artists like Modigliani and Kirchner. But as a graphic storyteller, she has no precursors. Indeed, she is doing things within the frame that few have attempted since, and from which contemporary comics might learn a great deal. For example, in the many paintings devoted to Daberlohn and Paulinka, she often paints them talking in manifold aspects, with the dialog incorporated into portraits in sequence across the canvas.

Detailing multiple moments in time within a single frame, offering several portraits of her subjects (sometimes in a single frame and at others in a slow sequence exploring alternating palettes and lighting), using architecture to produce internal panels, and dispensing with panels altogether when time collapses—all of this is the work of a master graphic storyteller in addition to a brilliant expressivist painter. That she found her way to her art in the midst of unutterable grief and anxiety is all the more astounding. 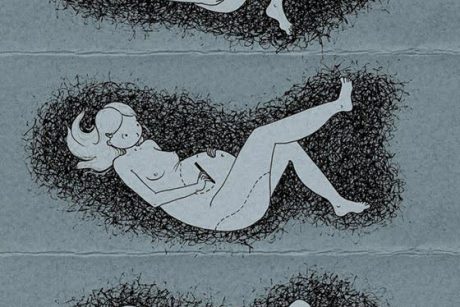 Show Me Where It Hurts: Part 1

The final chapters detail the end of the illusion of reprieve for the haut-bourgeois Jews of Berlin. Charlotte’s father is taken to a camp where his health declines precipitously, from which he is released only through the careful diplomacy of his wife, still able to draw on her fame and connections. The German Jewish community scatters, to Australia, to the US, and in Charlotte’s case to her grandparents in France. There she is reunited with her grieving grandmother, who now sits by the radio listening to accounts of the Jews of her native Germany being rounded up and murdered. The depression that took her daughters overcomes her completely, and she makes an initial suicide attempt. In response, Charlotte decides to use the theories she has distilled from her time with Daberlohn to save her. As she says to her grandmother,

if you think about it, you can look back on a wonderful, full life. … Some of your most recent poems are positively inspired, and I am convinced that a great literary talent has been lost in you. So I’ll make you the following proposition: Instead of taking your own life in such a horrible way … why don’t you make use of the same powers to describe your life? I am sure there must be some interesting material that weighs on you, and by writing it down you will liberate yourself and perhaps perform a service to the world.

The therapy fails to save the grandmother from suicide, but it serves as a powerful manifesto of the therapy Salomon used to save herself and an articulation of the will to art that drives Life? or Theatre?

At one point in the work, shortly before Charlotte and Daberlohn are separated forever, Daberlohn says to her, after praising her art, that “one day people will be looking at us two.” Now, thanks to this beautifully edited and produced edition, we all can look—and draw on the faith in art that sustained Charlotte, Paulinka, and Daberlohn through the unthinkable.

Featured image: detail of a page from Life? or Theatre? 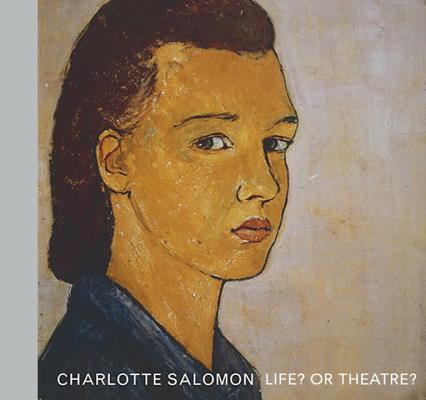