In Memoriam: Ursula K. Le Guin
If Ursula K. Le Guin’s death left only a small hole in the larger world, it poked a large hole in my smaller one. I was glad, of course, that her praises were quickly ... 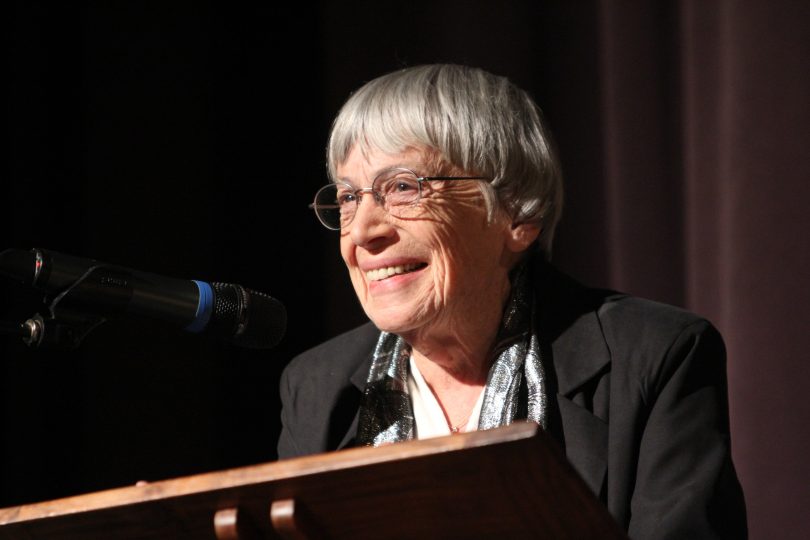 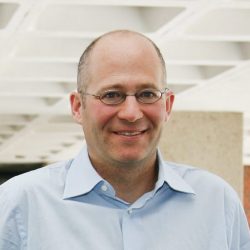 If Ursula K. Le Guin’s death left only a small hole in the larger world, it poked a large hole in my smaller one. I was glad, of course, that her praises were quickly and widely sung. The obituaries and memorials rightly noted her place both in the SF/fantasy and in the mainstream literary canon: one of only four authors to make it into the Library of America alive. And the brilliant N. K. Jemisin’s encomium—that Le Guin taught her “beauty and fearlessness go hand in hand”—should remind us how many younger women writers now travel down a road that Le Guin laid, stone by difficult stone.

Still, this death hit me very hard. It is hard to accept the loss of a writer who never gave up exploring what it means to take action in the world, then return to that action and reconsider. Le Guin’s writing taught me that going forward sometimes involves turning back, even overturning. She thought a world into being for her readers—and then, by rethinking it, invited all of us to think again as well.

How should we assess the Le Guin era, now that it has ended? That Ursula Kroeber (born in Berkeley to famous anthropologist parents) was exactly eight days old on October 29, 1929, does not make her a child of the Great Depression. She was formed in a later crucible. Like my own parents, she came of age in Eisenhower’s America, when being white and middle-class seemed to guarantee not only material but also metaphysical security. Perhaps responding to that detestably (and deceptively) placid world, Le Guin loves to begin her books in places of seeming comfort: Sparrowhawk among goats on Gont; Shevek the physicist in a socialist commune on Anarres; unremarkable George Orr, vaguely troubled by strange dreams in his ordinary Oregon.

And then things start moving—which also means they start to go wrong in a way that suggests how wrong the reader was to think they were ever right. Sparrowhawk has magical powers (but his first spell puts a rip in the world); Shevek’s commune is no paradise (but leaving it is no cure); George’s dreams change the world (but every good impulse ripples out into terrifying unintended consequences). Le Guin’s books sublimely mix comfort and revelatory, emancipatory unsettlement. She needs her readers to believe in that easeful place, where feet are put up and eyes set on the horizon, so that all the dis-ease that follows has its proper contrast: to every shadow, its light. (The one, lovely piece she wrote for Public Books praises Scottish novelist John Galt for putting his finger unerringly on the violence simmering below the everyday.)

Le Guin came of age in Eisenhower’s America, when being white and middle-class seemed to guarantee not only material but also metaphysical security.

It would be easy to praise Le Guin’s work indiscriminately, but she herself was big on the responsibility to make decisions for oneself. The day I puffed up to her hilly Portland neighborhood to speak with her for Public Books, she ended the interview by leading me down into her pleasantly musty basement to select books for my kids. It felt—and feels even more now—like stepping down into the Underworld. I vividly recall her beaming up from under hulking metal shelves of books, inviting me to choose. Well, I will.

In fact, I’ve already chosen once: when I first wrote about her for Public Books, I focused on Le Guin as the muse of the Nixon era: The Left Hand of Darkness in 1969, The Lathe of Heaven in 1971, The Dispossessed in 1974, and the first Earthsea trilogy—A Wizard of Earthsea, The Tombs of Atuan, The Farthest Shore—between 1968 and 1972. Her anarchist aesthetics offered beleaguered Nixon foes a vision of an unmobilized America, a country whose strength lay in slowness to act, suspicion of patriotic fervor. In recalcitrance, hope.

Le Guin’s death, though, taught me to think again about what happened after that brief span. If Fitzgerald had been right about second acts in American lives, those seven years would have been plenty. Only, he wasn’t—which also means I wasn’t. Starting in 1990, Le Guin began publishing Earthsea fiction again. In Tehanu, Tales from Earthsea, and The Other Wind she told it all over again, only different.

In that second trilogy, Le Guin added stories that revealed her world’s hidden aspects—and hidden weaknesses. In the first trilogy, Earthsea’s essence (unless you had the same childhood fixation on Earthsea I did, you may have to trust me on this) rested on three inviolable rules: that magic’s power “consists in … the true naming of a thing” in “True Speech”; that there is perpetual enmity between deceitful, morally ambiguous humans and truthful but irredeemably deadly dragons; and that wizardry and the School of Wizards on Roke is strictly a boys’ club—everything else is “weak as women’s magic … wicked as women’s magic.”

All three of those earlier Earthsea rules, however, turn out to be a misunderstood inheritance, belief-generating stories that had hardened over generations into seemingly immutable laws. (I am sure Le Guin loved “It is a truth universally acknowledged … ,” Jane Austen’s sly opening line about perfectly obvious truisms that are anything but true.) The later Earthsea books are not inversions, but rotations, so that everything that had been mapped with x-y coordinates is now also measured along z, a previously invisible axis.

In the second trilogy, naming in the True Speech means committing oneself to acting rather than observing, which comes at a terrible price; the division between dragons and humans is revealed to have been an imaginary one all along; finally, rather than being wicked or weak, women’s magic is just magic plain and simple. Le Guin’s second trilogy overwrites the first without overriding it. Tehanu, Tales from Earthsea, and The Other Wind could only ever have been a second act, and their secondness is what makes them great.

Scholars can (and should) argue about what allowed Le Guin to revise and resubmit Earthsea. Did the ferociously gender-blind feminism that inspired The Left Hand of Darkness spur Le Guin to disavow the implicit quest machismo of A Wizard of Earthsea? Did her turn toward Taoism persuade her that inaction is always the silent (and often the better) partner of action? No matter the answer, what matters most to me is the boldness with which she turned a cold eye, a dragon’s searching eye, back on the comfortable green world she herself had made decades earlier. If she can do it, why can’t we?

At the National Book Awards in 2014, Le Guin quotably said that “Capitalism[’s] power seems immutable. So did the divine right of kings.” Le Guin herself may not be the fire-breathing dragon to set that particular tyrant ablaze. But her Earthsea second act reminds us, her readers, that we too are dragons—which means we too are beautiful and we too can be fearless. Right up to the end, Ursula K. Le Guin went on getting right what was wrong in the world. Not only her own imagined Earthsea but also the wide world she shared with the rest of us—equally sweet, equally bitter. 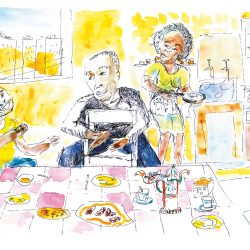 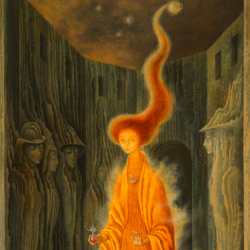