“It’s the iPhones Isn’t It?”
If you’ve picked up a Sunday newspaper or a biweekly magazine sometime in the past decade, there’s a good chance you’ve come across more than one article about ... 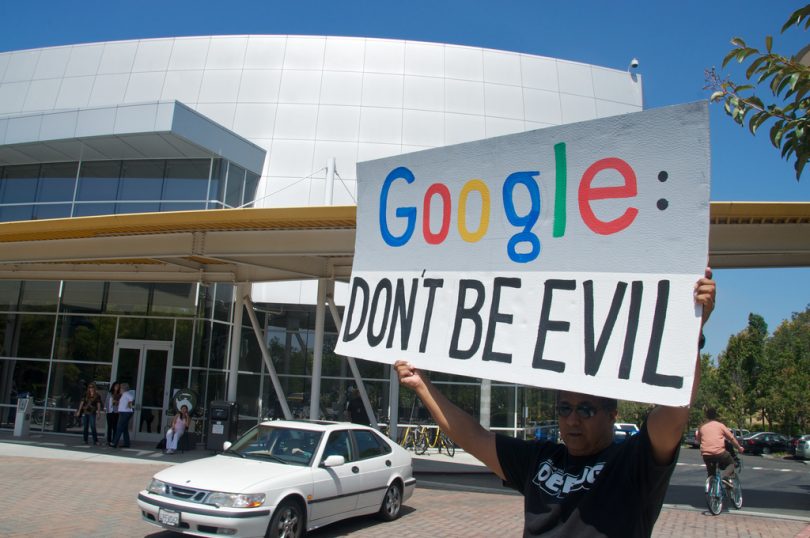 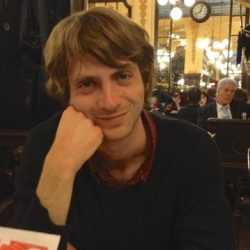 If you’ve picked up a Sunday newspaper or a biweekly magazine sometime in the past decade, there’s a good chance you’ve come across more than one article about deteriorating attention spans, declining human empathy, or the gradual death of solitude. It’s also likely that the authors of such pieces were quick to blame these social ailments on digital technology. “Is Google making us stupid?” asks Nicholas Carr in a 2008 Atlantic piece.1 “Have smartphones destroyed a generation?” Jean Twenge pondered as recently as September 2017.2 The anatomy of our current melancholy is almost always framed in digital terms. Why?

Understandably, political developments of recent years have thrown our techno-moral panic into a higher pitch. Political fear over fake news has replaced sentimentality about the need for solitude in an over-connected age. Yet I can’t help but feel that the origins of the present crisis are deeper than these diatribes against our digital devices seem to suggest. More often than not, we’re too quick to point the finger at the most obvious outward signs of social change—in this case our digital gadgets. Even more worrisome, we tend to assign a strange form of agency to our devices. They “make” us or “ruin” us; they “destroy” some essential human quality. We’re told, over and over again, that our digital devices have ushered in a Brave New World. Yet all too often, such investigations fall into an unhelpful circular logic. Most commentators on our digital condition see our devices as causes rather than effects. What such pundits misunderstand is that our devices—and, more importantly, the labor practices they’ve helped facilitate—were designed to fill a need.3 In order to discover what need is being filled we must turn away from the hypnotic glow of our screens and direct our attention elsewhere, back toward the human world from which our devices emerged.

This human world is the subject of philosopher Barbara Cassin’s newly translated book, Google Me: One-Click Democracy. According to Cassin, there is nothing particularly modern about our over-mediated present. In order to understand the dominance of the Californian Ideology, we must turn our attention to that band of philosophical outsiders, the “bad others” of ancient Greece: the Sophists. Writing as an accomplished Hellenist, Cassin means this literally. In a book by Cassin, terms like “sophistry” or “sophistical practice” are not lazy shorthand for “fake,” “fraud,” or “swindler.” Sophistry is not an insult but a neutral description. And perhaps it’s a useful one. Today, both Google’s advocates and its critics describe the company in almost divine terms (their motto, “Our mission is to organize all the information in the world,” demands theological reverence). But Cassin brings Google founders Larry Page and Sergey Brin back down to earth. There is nothing new about Google and its promises. The ancient rhetoricians have seen it all before.

Fake news, it turns out, also has its origins in ancient Greece. Cue Gorgias and his fellow sophists, whose technical know-how, disregard for truth, and drive for profit provide a nice framework for understanding today’s cybernetic CEOs. Cassin describes Google and its sophistical ideologies as:

a pseudo-omnicompetence, with a grasp of the real and the everyday, but as far as possible from what truly counts, that is from the idea and from truth, and with a know-how that is concerned primarily with selling itself, and generating profit—a scandalous profit in the eyes of the Plato lying dormant in each and every one of us.

The rise of quantification—which purports to be “hard fact,” an accurate metric for determining worth—is truly sophistical. Is there any form of reasoning more specious than recourse to statistics? To click counts and ad revenue?

Academics, of all people, should be well aware of this. For Google was born out of the womb of the American academy—an institution hardly resistant to the cultural logic of quantification. PageRank—Google’s search algorithm—is modeled after the criteria for determining the worth of academic research. The more clicks (just like: the more citations), the more relevant the link (or journal article) is deemed to be. By this logic, quantity becomes quality, and a feedback loop ensues. “Research becomes what the journals say research is, and researchers only exist henceforth as bureaucrats,” writes Cassin. In order for something to count, it must be counted. Measurement is the order of the day. We live, as Google executives might say, in a democracy of clicks.

Although the word neoliberalism rarely occurs in her work, Barbara Cassin has advocated for the destruction of such forms of performance measurement—neoliberalism’s most visible symptom—for decades. In 2014, she edited a collection of essays called Derriére les grilles: Sortons du tout-évaluation. The title (think “behind bars” in English) is an obvious double entendre: the grids, bars, and graphs with which we measure our performance—from academic citations to our sleep cycles to our heart rates—have become a sort of prison. The problem is not the machines themselves but the measurements the machines help to produce.

It’s easy to forget that our devices, algorithms, and gadgets are not the source of our social ills. They are effects, not causes.

But Cassin’s book reminds us that Google’s project did not always seem megalomaniacal and excessively corporate. Just over a decade ago, the public saw Google as the good guys. Like their ancient forbearers, Page and Brin were quick to cultivate a playful and progressive public image. Yet Cassin was among the first to see the nefarious side to Google’s project. It’s worth noting that Google Me (which originally appeared in France, in 2007, as Google Moi: La deuxiéme mission de l’Amerique) was written for a European public still coming to terms with US adventurism in Iraq. For Cassin, the proliferation of information technologies like Google’s search algorithm rhymed curiously with the logic of American military expansion. Neocolonial adventures in Iraq and Afghanistan were nicely mirrored in Google’s imperial ambition to organize all the information in the world. The course of empire made its way to encyclopedias as well as oil fields. “Don’t be evil”—Google’s other motto—was a product of the same historical moment that produced Bush’s famous speech on the “Axis of Evil.”

First published in the age of Mission Accomplished, Google Me reads as prophetic in the age of America First. Cassin reframes our current debates about the health of democracy in a technological-neoliberal age within a broader philosophical context. Our iPhones and algorithms have not brought forth a new world, they’ve just added a 21st-century gloss to an ancient problem.

American journalist Franklin Foer, in his new book World Without Mind: The Existential Threat of Big Tech, sees things somewhat differently. There is much history in Foer’s well-researched and highly readable book, and his concerns about Big Tech’s imperial ambitions are deeply valid (I share many of these concerns myself). But his analysis is ultimately disappointing (as are his political objectives). Like Twenge and Carr—the anti-tech moralizers cited above—Foer focuses his attention on a handful of recent inventions, rather than on the economic imperatives that such inventions embody and reify.

First, it’s worth pointing out that Foer’s subtitle is somewhat misleading. “The existential threat of Big Tech” is grandiose, while the underlying story he has to tell is considerably more local and somewhat pettier than it seems to suggest. The “mind” of the title broadly refers to the institutions dedicated to knowledge production, namely: academia, journalism, and publishing. It’s understandable that Foer, a staff writer for the Atlantic, should be worried about his particular subset of the culture industry. Far more than academia or publishing, journalism has undergone a sea change since the introduction of digital distribution methods. Advertising revenues dried up, causing prestige magazines (such as Foer’s old home, The New Republic) to seek revenue by replacing learned reportage and analysis with rather more profitable (yet undeniably degraded) clickbait. 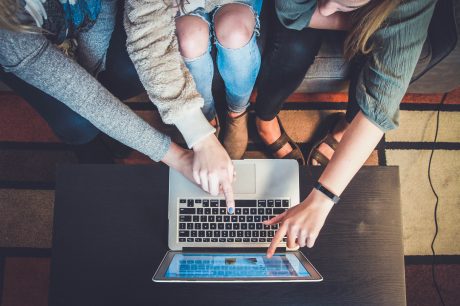 This explains the palpable sense of nostalgia in World Without Mind. Foer longs for the good old days when journalism and academic research were privileged spheres of humanistic inquiry, beholden to nothing but Truth itself. But alas (just as our sophistical forefathers knew), it turns out that Truth has become another commodity in the marketplace of ideas. Today, most writing has been reduced to mere “content,” yet another node to be quantified, captured, and sold.

Foer, like Cassin, is allergic to the cultural logic of quantification—but unlike the philosopher he confuses this economic imperative for a technological one. As with everything else in the gig economy, knowledge has become another aspect of production. And yet according to Foer, this has nothing to do with the neoliberal revolution, in which all values have come to be replaced by market values. Indeed, Foer is himself an unabashed individualist who extols “competition” and “innovation,” the very buzzwords that propelled his Big Tech enemies to their current Olympian heights.

Foer makes the fatal mistake of representing this altogether worldly, economic problem into a conspiracy instigated by the world’s biggest corporations. Of course he is correct to say that Facebook, Apple, Google, and Amazon see “humans as data, components of systems, abstractions,” but this is nothing new, as Cassin has so aptly demonstrated. Such is the imperial logic of commodification—nothing, not even ideas, are safe from the market’s grasp. Foer’s incredulity at the fact that magazine articles “are subjected to a cost-benefit analysis” is as bemusing as his moralistic bromides about how “tech companies are destroying something precious.” Ultimately, his call for a “paper rebellion” against our digital screens rings hollow. Cozying up with a good book is hardly a battle tactic. If Foer is serious about tackling the threat of Big Tech, he should point his weapons at the human institutions that created them.

As I approached the end of World Without Mind, I found myself thinking of a meme I recently came across on my Facebook timeline:

adults: record numbers of teens are depressed, we must find out why

teens: school is more stressful than ever, our parents screwed over the economy, the earth is on a path to total environmental destruction, and now we have to deal with actual fuckin nazis

adults: it’s the iphones isn’t it?4

It’s easy to forget that our devices, algorithms, and gadgets are not the source of our social ills. They are effects, not causes. When Foer talks about big tech, he actually means neoliberal economics: precarious labor, unpaid internships, the decline of print journalism, and the rise of managerial jargon are all integral to the operation of our supposedly frictionless information society. It’s not the iPhones, it’s the mode of production that called them into being. 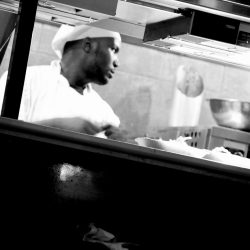 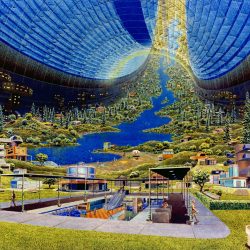 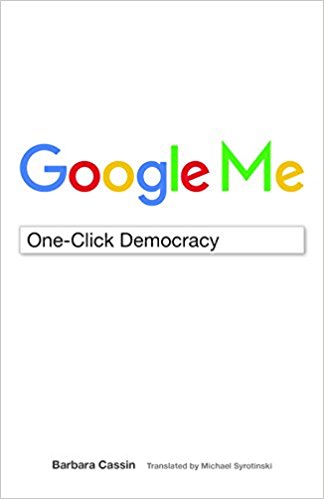 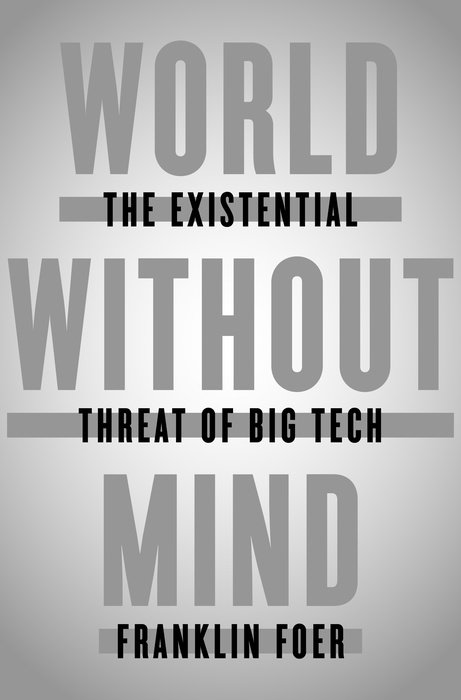 World Without Mind: The Existential Threat of Big Tech