From “A New Practical Guide to Rhetorical Gesture and Action”
The National Theater of the United ... 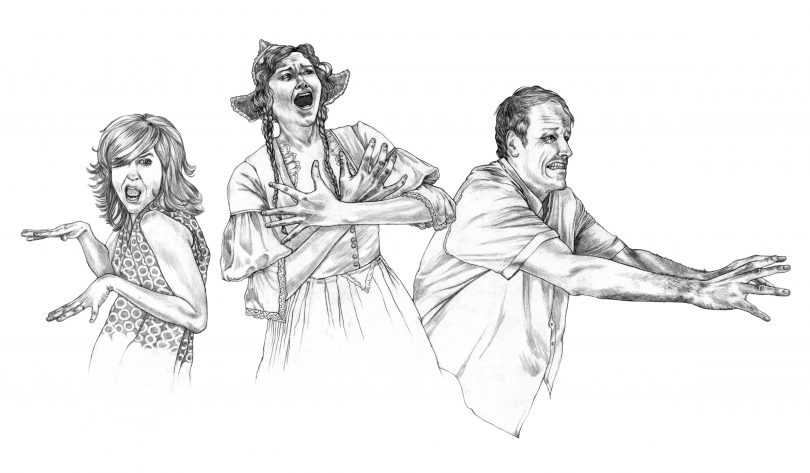 The National Theater of the United States of America (NTUSA) is a New York–based collective of multidisciplinary artists who have been making spectacular works of theater and operating across a variety of media since 2000. This month will see the publication of their A New Practical Guide to Rhetorical Gesture and Action, based on Henry Siddons’s 1807 illustrated guidebook for actors. Public Books is pleased to present below a selection of Jesse Hawley’s illustrations, of contemporary actors reinterpreting gestures from the original book, each accompanied by a panel of descriptive text by Normandy Sherwood, and an adaptation of James Stanley’s introductory essay to the volume. From May 18 to June 11, 2017, Abrons Arts Center, a home to experimental performance in New York, is hosting a gallery show of the complete illustrations and text from the book. A launch event at Abrons on May 27, open to the public, will feature performances, readings from the book, and music by The Vintage DJ. 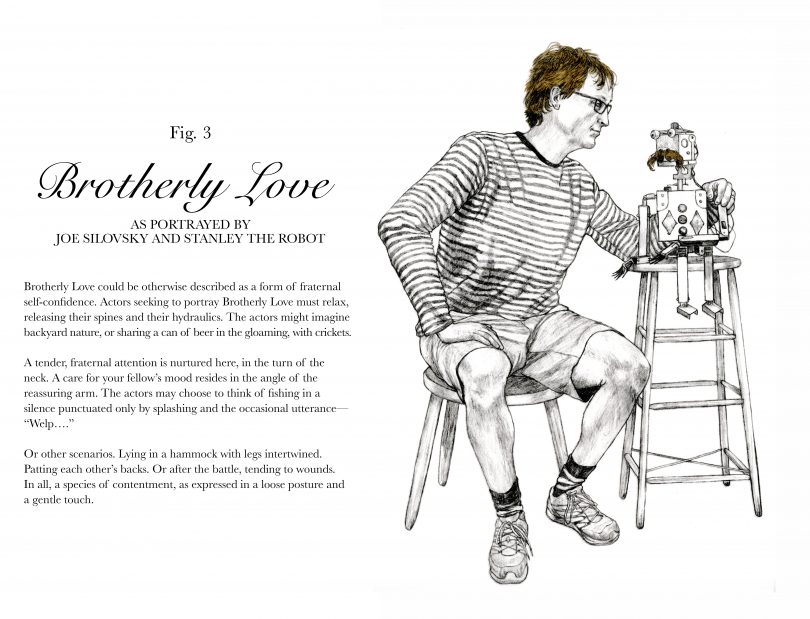 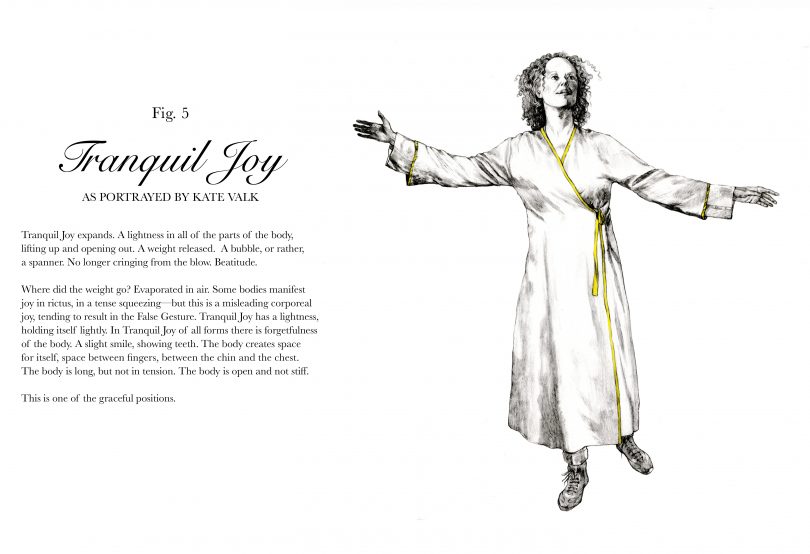 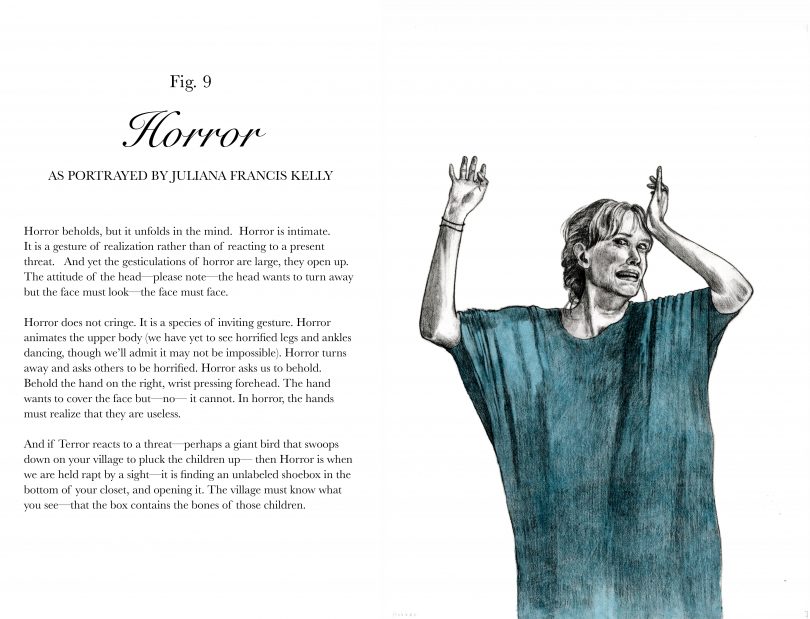 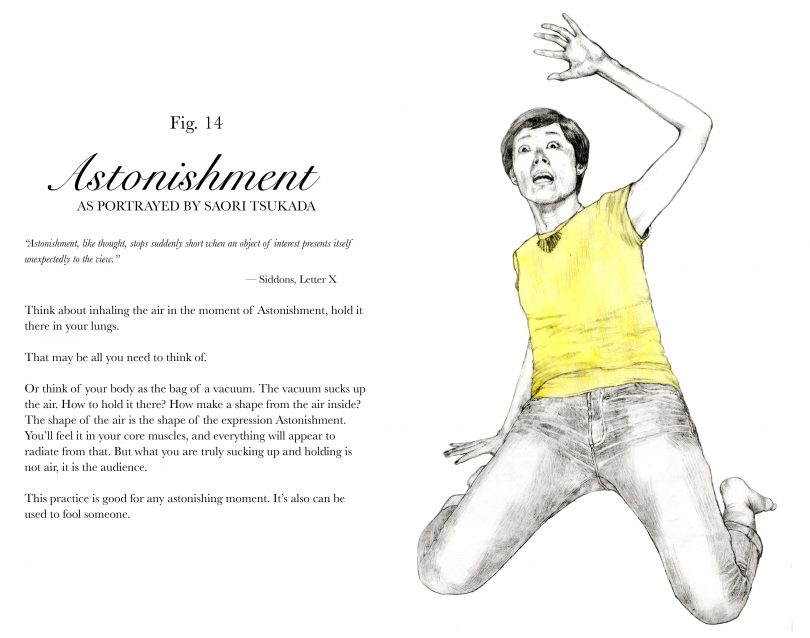 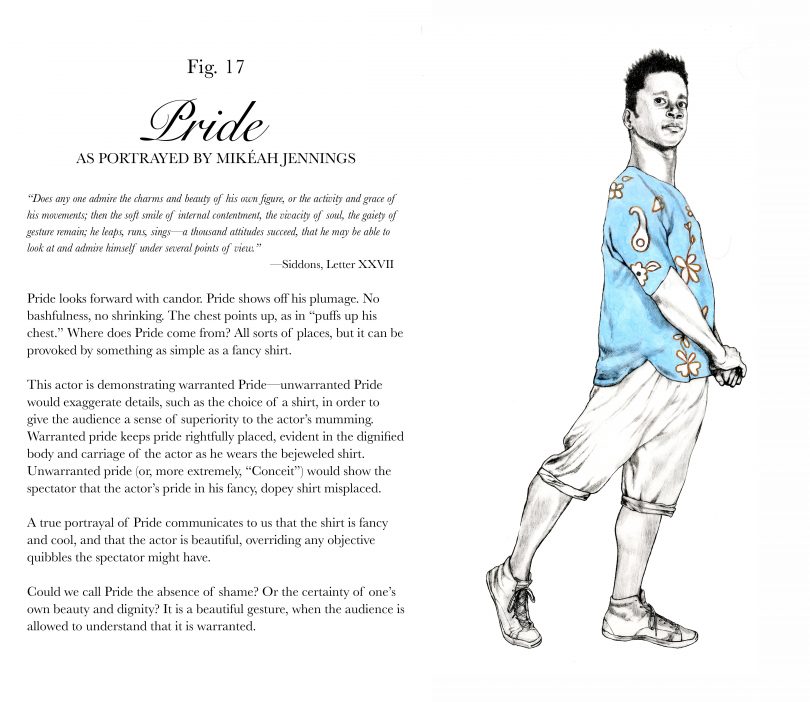 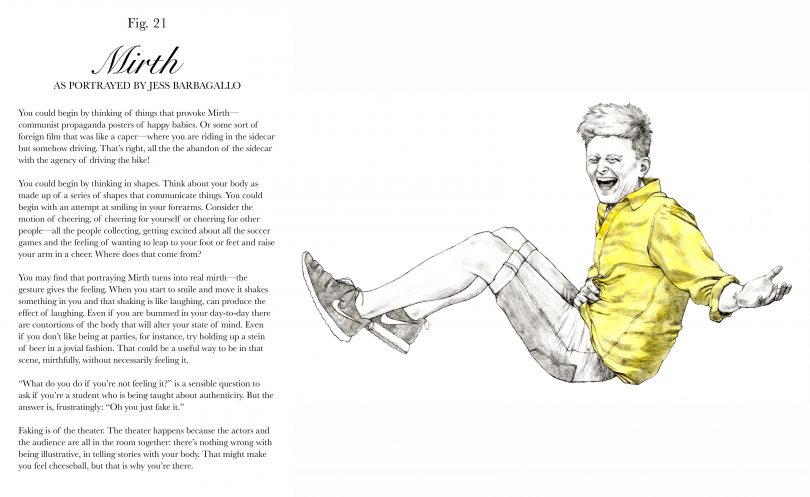 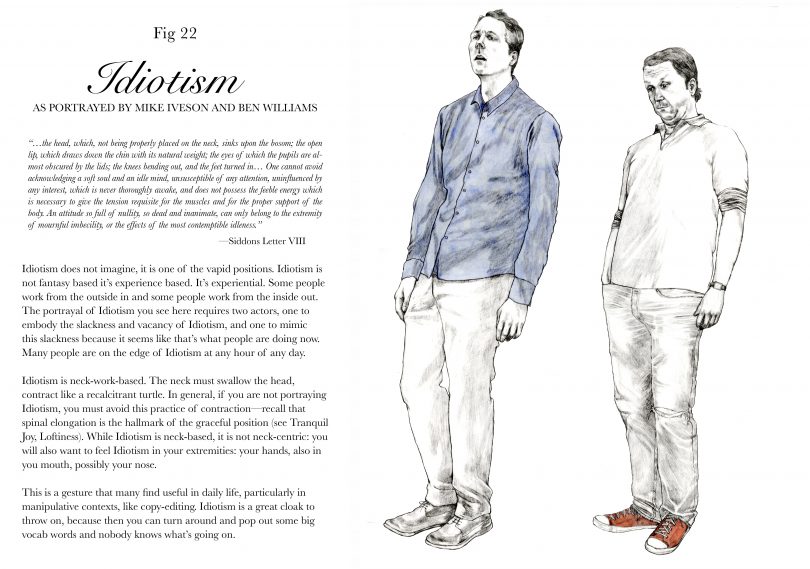 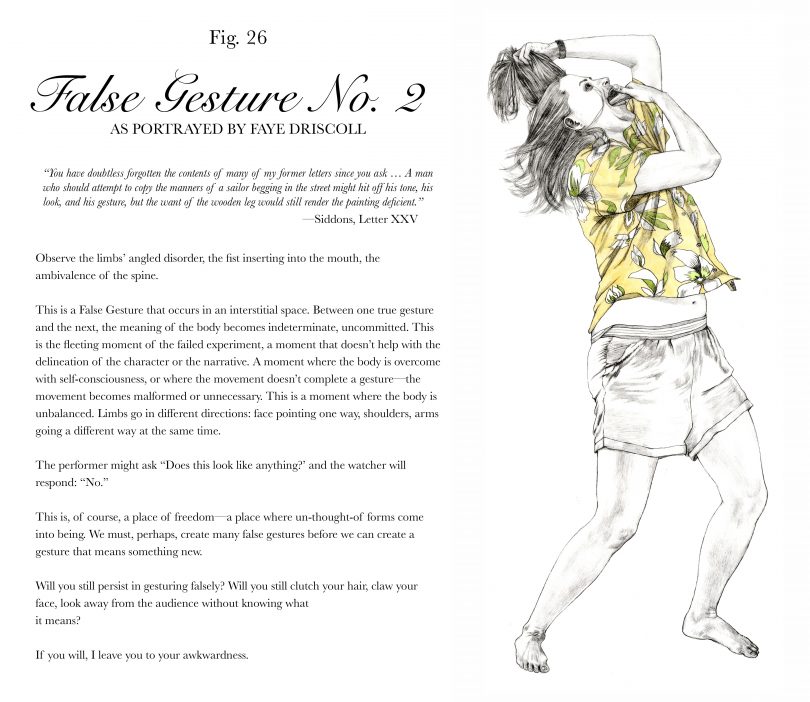 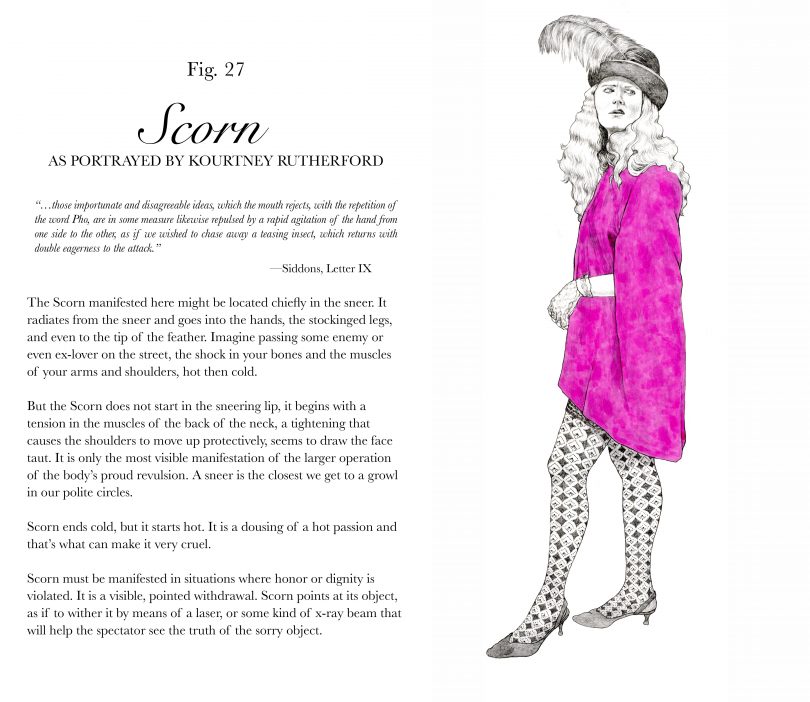 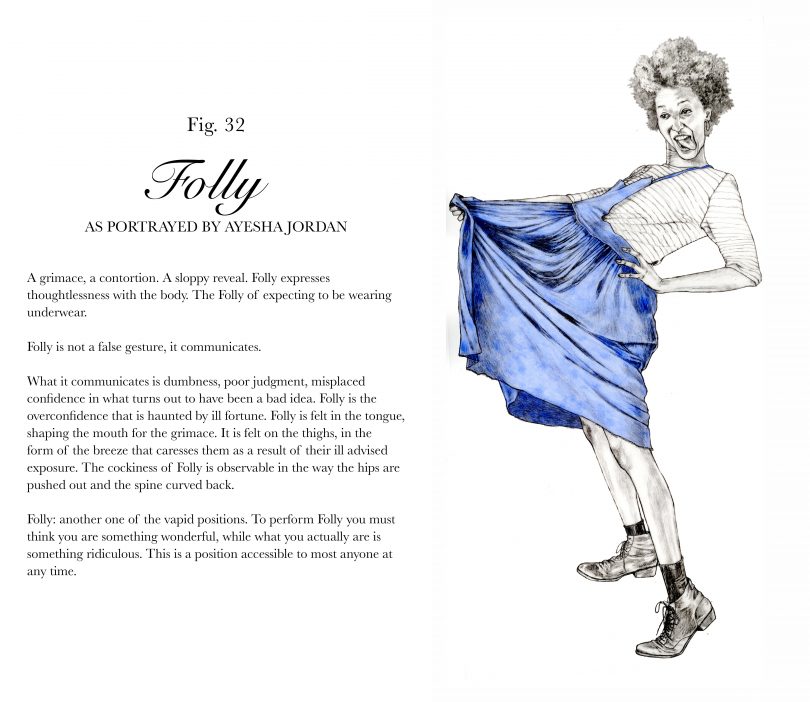 The National Theater of the United States of America has over the years mined historic forms of entertainment and spectacle—from vaudevilles, Chautauquas, and Victorian parlor theatricals to zombie films, game shows, and amusement park rides—for what they can tell us about the present. Sometime around 2005, company member Normandy Sherwood gave fellow company member Jesse Hawley a stack of photocopies as a birthday present, and they quickly made the rounds within the company. These photocopies were of illustrations from Henry Siddons’s 1807 actors guide, Practical Illustrations of Rhetorical Gesture and Action. In this book, Siddons presented, in pictures and words, a catalogue of theatrical gestures that could be applied to various dramatic situations and offered advice on how they could be used in the practice of acting.

Henry Siddons was the son of Sarah Siddons, who, along with her younger brother John Kemble, was considered the greatest actor on the London stage. Siddons and Kemble had brought a new classicism to acting, issuing a challenge to the more naturalistic style championed by David Garrick more than a generation earlier. This new classicism was not so much a return to the cold declamatory style that Garrick had rebelled against, but rather an investment in a heightened form of realism that replicated not the quotidian gestures of everyday folk, as Garrick had done, but rather their ideal forms as embodied in classical painting and sculpture. And so, with his book, young Henry entered into an ongoing debate about acting, one carried on in a profusion of treatises coming out of Europe with increasing intensity since around 1750.

Siddons’s book was, in fact, a quite literal translation of a 1785 treatise by the German writer Johann Jakob Engel, director of the National Theater of Berlin. Siddons acknowledges this on the title page of his book, noting that his version was “adapted to the English drama,” and that Engel was a member of Royal Academy of Berlin—thus declaring, in his bid to be taken seriously by the London theater set, that his book had been properly vetted. But, according to historian Shearer West, Siddons’s “adaptation” consisted largely of altering the illustrations, replacing the “German physiognomies” with the “unmistakable countenances” of his mother and uncle.1

To contemporary sensibilities, Practical Illustrations may seem an archaic absurdity. And indeed, that is what first attracted us to it. As a theory of acting it seems to propose the impossible: a preposterously mechanistic prescription for a process that conventional training in method-based realism had taught us was emotionally deep and psychologically complex. At the same time, Siddons’s theory appears to anticipate a number of methods in use in the contemporary world of experimental theater, like Anne Bogart and Tina Landau’s Viewpoints and the Wooster Group’s use of simulacra: processes that turn away from human psychology and emotion and privilege instead pure mimesis, formalist aesthetics, imagistic modes of presentation, and the sheer theatricality of bodies making shapes in space. And so we saw in Siddons’s book aspects of our own theatrical culture.

We thought then to produce an updated book of rhetorical gestures in which we would ask contemporary performers to reinterpret gestures from the original. As in our shows, our goal would not simply be to lampoon the original. For one thing, we had no singular theory of acting that needed articulation and to which these images would function as an index. Rather, we hoped we could arrive at an index of gestures that represented the multiplicity of performers and performance styles that we saw at work around us today. In doing so, we saw an opportunity to create an historical artifact of our own by documenting the community of theater makers of which we felt ourselves a part.

The NTUSA’s A New Practical Guide to Rhetorical Gesture and Action features 48 actors from the vanguard of contemporary performance reinterpreting gestures from the original. Starting in 2013, Hawley began photographing these actors in a studio, then used the photographs to create illustrations, drawing on the tradition of theatrical portraiture popular in Siddons’s day. These illustrations, ranging in size from 12 by 18 inches to 24 x 36 inches, were digitized and printed at full scale on archival paper, then hand-colored. As in Siddons’s original book, each illustration here is paired with text that muses on the gesture and its utility in various stage situations. This commentary, written by Normandy Sherwood, is in many cases based on interviews conducted with the actors after their photographs were taken. Sherwood gestures toward the original book with her mock pedagogical tone, but adds to it a wry poetic lightness, opening a space for contemplation.

Featured image: Portrait of the authors by Jesse Hawley 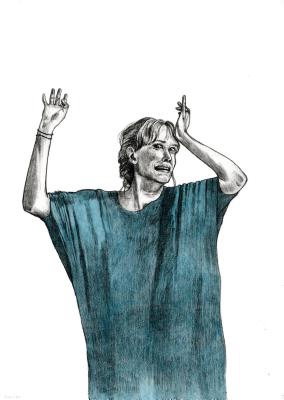 A New Practical Guide to Rhetorical Gesture and Action