Otherworlds
In the history of modern comics—as in the history of comic’s cousin, film—there have long been two competing impulses. Film history contrasts the styles of two pioneers: the documentary realism of ... 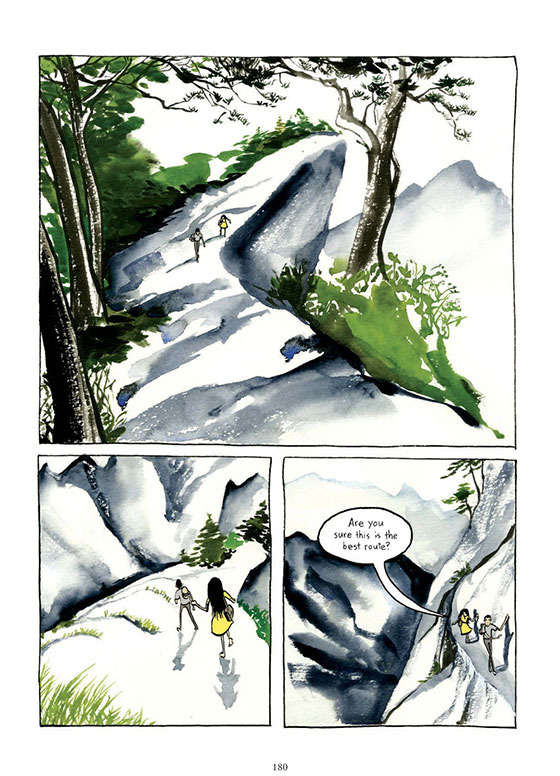 In the history of modern comics—as in the history of comic’s cousin, film—there have long been two competing impulses. Film history contrasts the styles of two pioneers: the documentary realism of the Lumière brothers and the magical stagecraft of Georges Méliès. In comics, we can find a parallel fork in the road in the pioneering urban realism of R. F. Outcault’s Yellow Kid and the fantastical dreamscapes and hallucinations of Winsor McCay.

In the classical Hollywood era, film increasingly privileged the real over the fantastic, leaving comics free to explore the unreal. That unrealist tradition in comics thrived from the time of George Herriman’s Krazy Kat (1913–1944) through the rise of the superhero genre in the 1940s up to the underground comix movement of the late ’60s and early ’70s.

In the years following the decline of underground comix, however, comics has seen a hard shift towards realism. The emerging canons of comics studies in the academy have been overwhelmingly dominated by history, memoir, and semi-autobiographical fiction. Even superhero comics have over the past two generations alternatively highlighted psychological realism and everyday life beyond the mask. All of this can give the decided impression that comics have largely split from the tradition of McCay’s Little Nemo and his adventures in Slumberland.

The three books discussed here, on the contrary, enthusiastically take up the possibilities of the comics form to fully inhabit a world of dreams, magic, and transmogrification. All tell stories of romantic and deadly journeys across treacherous and haunted landscapes. We begin here with a book whose world is still recognizably our own, one still grounded, for the most part, by the rules of our world. By the end of this review we will have entered realms where parasites outnumber hosts and where flesh falls away as effortlessly as autumn leaves.

The Undertaking of Lily Chen is Danica Novgorodoff’s masterpiece. When her first book, Slow Storm, was released in 2008, Novgorodoff impressed me as a talented and expressive artist who had not yet found her voice as a storyteller. While I marveled at the book’s stunning watercolor renderings of the Kentucky landscape, the story itself was simultaneously underdeveloped and overwrought, as if trying to compensate with lightning and tornadoes for the inability to find a charge in the characters themselves. In her second book, Refresh, Refresh (2009), Nogorodoff turned the script over to collaborators James Ponsoldt and James Percy, but the results were largely the same: a bruising and ultimately muddled story of teenage boys left behind in rural Oregon by their soldier fathers, working out their frustrations and fears through an embrace of violence and danger that ultimately leads them to enlist in the armed forces that took their parents. Both stories failed to live up to the energy and beauty of Novgorodoff’s ink-and-watercolor artwork, and I confess I somewhat lost faith that graphic narrative was in fact the right medium for her.

Five years later, and I am ready to proclaim her one of the form’s best storytellers. With The Undertaking of Lily Chen, Novgorodoff has found a tale that allows her artwork to soar free from the constraints imposed by her earlier realist fictions. Imaginatively spinning off from an article in The Economist about the resurgence of an ancient and obscure custom in China of “ghost marriages,” in which an unmarried dead man is “wed” before burial to a female corpse, Novgorodoff leaves behind the rural American landscape of her earlier work for a landscape that is at least part dreamland.

The book tells the story of a sorry young man, Deshi, who is given a week by his grieving parents to find an unmarried corpse for his dead brother. After several failures to find a suitable body, Deshi collides with Lily Chen, a young woman about to be bartered off in marriage to a corrupt landlord and eager to be anywhere but her impoverished hometown. This unlikely pair—a browbeaten son and a spirited and obstinate young runaway—cross a landscape of desert and mountains, encountering ghosts, prophets, drunken monks, violent mercenaries, and Lily’s vengeful father along the way. And Deshi must wrestle with his own demons, who remind him at every turn what a golden solution young Lily offers to his dilemma, if only he could bring himself to kill her. Lily remains for the most part oblivious to this danger, with her endless banter and bullying doing little to aid her cause.

For fear of giving too much away about the conclusion to this absurd quest, suffice it to say that it is surprisingly romantic and, like the book as a whole, suffused with a boisterous dark humor that is entirely absent in Novgorodoff’s earlier work. Released from the dictum to write and draw what she knows, it seems, Novgorodoff has come of age as a storyteller by embracing the realm of romance and fantasy.

Novgorodoff’s Lily Chen was inspired not only by an article in a news magazine but by trips to the Chinese towns and landscapes that would ultimately be melded to create the storyworld of Lily Chen. In this way, her work keeps one foot solidly in the real world of our everyday. Nick Bertozzi is certainly no stranger to research and realism. He is best known as the creator of The Salon (2007), a murder mystery set against the founding of cubism, and other historical fictions, including Houdini (2007, with Jason Lutes), Lewis & Clark (2011), Jerusalem (2013, with Boaz Yakin), and, most recently, Shackleton (2014). Persimmon Cup—the first volume of a planned trilogy—was serialized originally at Act-i-vate, a webcomix collective that Bertozzi helped found in 2006; it is now available in a beautiful print edition, self-published thanks to a successful Kickstarter campaign.

With Persimmon Cup, Bertozzi has set sail for new worlds. The story opens in full flight: two green-skinned individuals—a female wearing a cowl and a male in a boxy helmet—flee through a surreal landscape. We watch them part a river by blowing spores into its currents and see the dangers that await from the pirates who swim the river looking for wandering prey. That we are not in Kansas anymore is made clearer still when we observe our protagonists first sit down to a meal, partaking by soaking their feet in craters filled with sap. 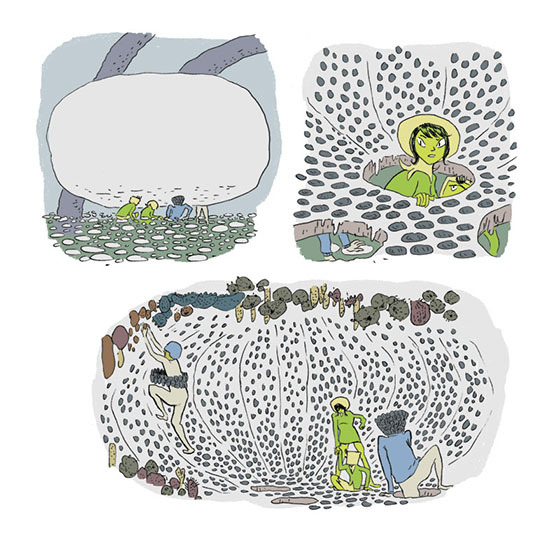 Persimmon, we learn eventually, is a Weaver, a member of a guild devoted to writing the official histories of the race on endless tapestries. She is now journeying away from the safety of her home because of the bumbling attentions of her traveling companion, a Cleaner named Garo who gifted Persimmon with a shiny cube he found while cleaning the looms. Unfortunately, this token of Garo’s affection has become the source of a horrible infection slowly consuming Persimmon’s flesh, literally hollowing her out. Desperate to repair his mistake, Garo has escaped the towers with Persimmon in hopes that his “muncle,” a healer, might cure her. Instead, however, his cowardly muncle betrays them to the tower drones, forcing them to flee for uncharted territories inhabited by creatures of unknown powers and appetites.

The improbable features and creatures of these new lands become their own pleasure, both narratively and visually. We learn about our protagonists, Persimmon and Garo, by how they negotiate landscapes governed by impossible physics. Garo turns increasingly inward, unable to shake free from his fear and sense of inadequacy to the task at hand. Persimmon, on the other hand, who never asked for Garo’s gift or the misadventures it has brought her, seems to expand in her encounters with the unknown, even as her body begins to fall to pieces.

Perhaps the greatest joy of Persimmon Cup lies in the freedom its world affords Bertozzi to explore the narrative possibilities of abstraction, giving over panels and even entire pages to shapes, lines, planes of color. From McCay on, the surrealist turn has served to remind us of the visual power of comics—their ability to convey meaning, emotion, and narrative without recourse to text, figure, or even indexical representation. The pleasure Bertozzi takes in his explorations here is contagious, and as new secrets are revealed in the volume’s final pages and new lands wait just beyond, it is impossible not to follow.

With his first book in 2011, Even the Giants, and more spectacularly with By This You Shall Know Him the following year, Jesse Jacobs has quickly emerged as one of our most original and exciting young cartoonists. By This Shall You Know Him is a psychedelic space opera about celestial beings competing to manipulate the universe at the molecular level. Selected for inclusion in last year’s Best American Comics, it should earn Jacobs the larger audience his work deserves going forward.

This past month, Jacobs published Safari Honeymoon, a slim volume so teeming with life—parasites, spores, and sentient vapors—that it feels alive to the touch. As the title promises, this is the story of a honeymoon safari in what is surely the most infected and deadly jungle in the unknown universe, one where everything is a parasite waiting to devour, invade, or mutate. The newlyweds consist of a pompous and powerful business magnate and his remarkable (and remarkably flexible) bride. In their safari they are accompanied by a guide who, in addition to his ability to do without sleep, is also a tremendously talented chef thanks to an enhanced sense of taste afforded him by a symbiotic relationship he developed with a parasite that took the place of his tongue.

Like Persimmon Cup, Bertozzi’s book asks us to sever attachments to the “real world,” but Safari Honeymoon also asks that we forgo our usual expectations regarding how a story is told, that we instead allow long movements to be carried in an entirely visual, abstract register. As was the case with By This Shall You Know Him, it is easy to forget we are in the midst of a story, as the dizzying and gorgeous images encourage the kind of concentration we associate more with art books than comic books. 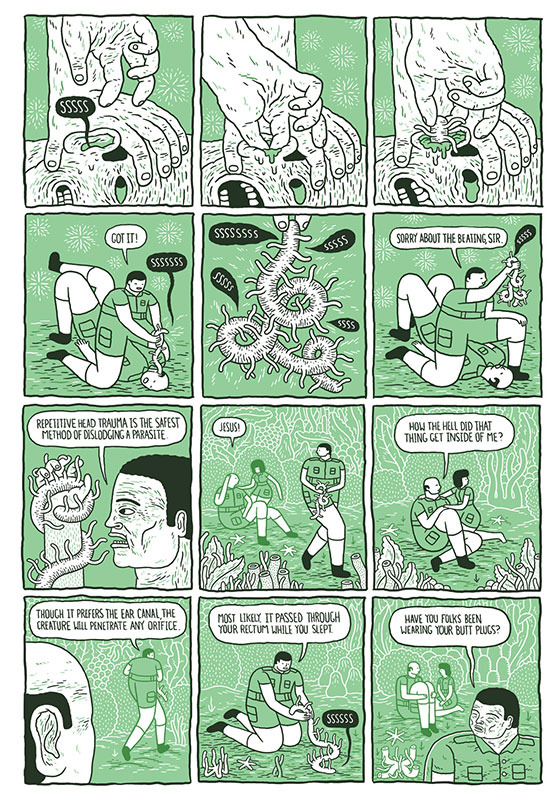 By the end of Safari Honeymoon the couple is transformed by their experiences in ways they could not have anticipated, and home is a very different place than the one they left. It is a satisfying conclusion, but the first time through I hardly noticed. Instead my attention was consumed by the beautiful shapes exposed by flesh as it breaks apart to release new life upon the land, and by the collapsing boundaries between flesh and foliage. Like the landscape on which our protagonists travel, the book seemed to have a mesmerizing power that left me feeling as if the pages themselves were casting spores into the air while I read.

In a recent interview, Jacobs said that if he weren’t a cartoonist he would probably have been a farmer. With Safari Honeymoon it seems that Jacobs has managed to be both at once, albeit a farmer in which the reader is the field to be planted.

These three fantastic journeys are each in their very different ways examples of the power of comics to transport us to spaces and places that even the most advanced CGI cannot render. And working in a form that always requires active engagement on the part of the reader, to fill in the gaps between panels and between word and image, these books also remind us of comics’ unique power to make the journey a collaborative one. For the dreamy, hazy summer days of summer that are now upon us, these are three journeys all readers should take for themselves.

The Undertaking of Lily Chen