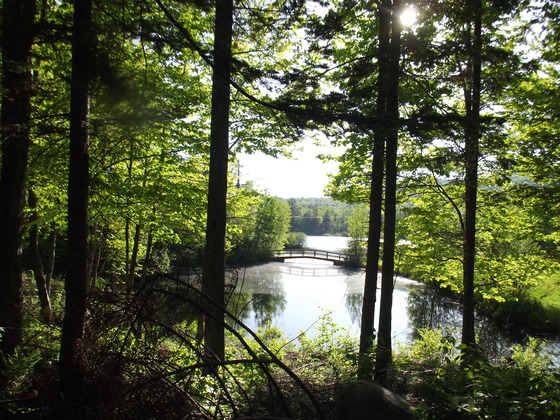 Pete Seeger once said, “If there’s one thing worse than banning a song, that’s making it official.”1 One could say something similar about good books: the one thing worse than banning the book is making it required reading. Henry David Thoreau’s Walden, which chronicles the 19th century transcendentalist’s efforts to live a simple woodland life, has been spoken of so extensively in the past 160 years that it can be hard to see the actual book behind that wall of words. Walden has become one of those unfortunate texts that is more frequently referenced than read, an easy cultural shorthand for our desire for simple living and natural harmony in a world growing ever more fast-paced and self-destructive.  I recently saw the book cited in an online discussion about one man’s attempt to cut costs for a few months by living out of his car. Even more confusing, a review of the Shane Carruth film Upstream Color suggested Walden as an inspiration for disturbing displays of inter-species sympathy between humans and pigs.  Why does the idea of Walden remain common currency in a world so very different from the one in which Thoreau lived?  Can Walden be read anymore, or can it only be referenced?

In 1845, Thoreau had been out of college for eight years. After receiving a healthy dose of philosophy, literature and science at Harvard, he went home to Concord, Massachusetts with no idea what to do with his life. He tried teaching, pencil manufacturing, and land surveying, with varying levels of success. Upon quitting a job at his father’s pencil factory, in the words of his lifelong friend Ralph Waldo Emerson, “[Thoreau] resumed his endless walks and miscellaneous studies.” He wrote copious journal entries, and in 1845 these overflowed into the beginnings of a book. Thoreau built a simple cabin by Walden Pond, a mile outside Concord, on land owned by Emerson. In the two years he spent at this self-made writing retreat, Thoreau produced two books: one about a boat trip taken with his beloved, recently deceased brother, and another that would be the initial draft of Walden. Most of the print run of the first book, A Week on the Concord and Merrimack Rivers, wound up in the Thoreau family’s attic. Walden was published much later, eight years after Thoreau left his cabin by the pond.

Walden is a curious book; difficult to love without reservations, and even harder to forget. I picked it up for the first time over a year ago, expecting what was on the cover: an account of living simply in a place of quiet and natural beauty. The more I read, however, the less I understood why this book has persisted in the cultural imagination while so many other (better organized, argued, and edited) works fall by the wayside. Walden is loosely structured around the seasons, compressing Thoreau’s two years at Walden Pond into one, but there is little else in the way of structural coherence. Thoreau describes for us, in detail, the precise color of fish that he finds in the pond (he believes this color to be unique), the taste of fresh huckleberries, the exact sound made by a loon. He lies on thick ice in the deep of winter, and describes for us the scenery below. He spends one long section on how he ascertained the pond’s precise depth, another lauding the punctuality of the passing train, another advocating vegetarianism. The book contains odes to Homer, references to Darwin (not yet known for On the Origin of Species, which was published five years after Walden in 1859), and long excursions into Hindu philosophy. An entire chapter details lovingly how Thoreau learned to cultivate bean plants, revealing at the end his distaste for beans as actual food. By the time I put down the book, I felt like I had just been subjected to the haphazard, verbose, and intensely personal diary of a 19th century version of Tolkien’s forest-dwelling Tom Bombadil.2

And yet bits stayed with me, wormed their way deep into my mind. Sentences from the book kept resonating against each other in my head for months after, gradually taking on new meanings. “The mass of men lead lives of quiet desperation,” Thoreau tells us. He seeks to live a life without desperation, to seek out the stillness of the present moment—“to stand on the meeting of two eternities, the past and future.” “I went to the woods because I wished to live deliberately,” Thoreau says, and then describes how he discarded, one by one, all that he found unnecessary in life: a mortgaged house, rich foods, new clothes, a steady job. Stripped of all extravagance, renouncing the constraints of civilization, he searches for the bare essences of life in the conversations of passing friends and the liquid flight of migratory birds.

The realization crept up slowly on me, reading Walden a second time, that its words had captured me whole. By the end, I knew that I had missed the point on my previous read. I had expected to find the writings of a proto-environmentalist, and scratched my head at the juxtaposition of poetry about natural beauty with raptures about trains. Beneath the digressions about squirrels, however (poetic as they sometimes are) and occasionally questionable references to current events (Thoreau dismisses the Irish potato famine, suggesting that the English should focus on the far more destructive “brain rot” rather than worry about potatoes), Walden carries the seed of a genuinely radical idea.

“The universe is wider than our view of it,” Thoreau tells us. And then he goes in search of that universe, not within pristine wilderness (if such existed even then) or on the other side of the globe, but within his mind’s eye. “The surface of the earth is soft and impressible by the feet of men,” he says, “and so with the paths which the mind travels.” He seeks out that impossible thing: true novelty of thought and new ways of being, unburdened from tradition. And so he questions every law, every norm, and discards those that seem superfluous or destructive. He turns over every stone in the woods, every oddity about human society, and tries (and sometimes succeeds) to look at what lies beneath with virgin eyes. Thoreau died young, before his third book on the Maine woods was published. I wonder what he would’ve become had he lived a little longer. A bearded hermit forgotten in the woods, perhaps—or maybe one of those luminous souls who seem to see beyond the horizon, simply gazing out the kitchen window.

Half a century later, Proust would write: “The only real voyage of discovery consists not in seeking new landscapes, but in having new eyes.”3 Rereading Walden, I was reminded strongly of those words. The book often contradicts itself, and flies from poetry to preachy allegory with gleeful abandon. Even so, it captures me. At the heart of Walden is a bold challenge, which resonates in a world that seems more embedded than ever in its tired, self-destructive trajectory. Alter your vision, the book says. Go outside, and look at the sun and society as if you’ve never seen either one before. Question all your sacred truths, and dream up a new way to be.