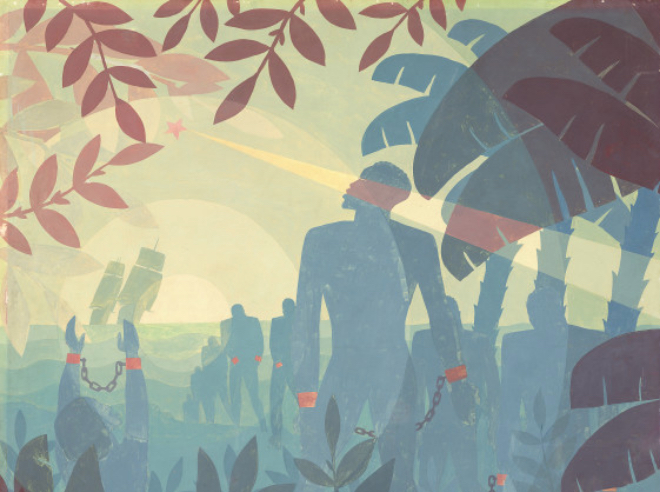 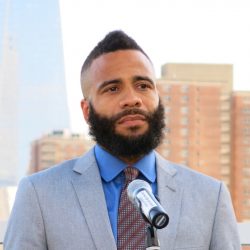 While first reading Ibram X. Kendi’s kaleidoscopic and admirably lucid Stamped from the Beginning: The Definitive History of Racist Ideas, I had a flashback to my days as a graduate student, during the years of Bill Clinton’s presidency. In particular, I remembered poring over Winthrop D. Jordan’s White Over Black: American Attitudes toward the Negro, 1550–1812 (1968) in one of my seminars. A second edition of White Over Black was released just five years ago, but in fact the number of historical studies on racist ideas has exploded in the half century since Jordan’s classic was first published. Expanding significantly upon such works, Kendi’s new book is destined to become a must-read for those seeking an accessible introduction to the complex intellectual history of racist ideologies in the United States.

Stamped from the Beginning is definitely US-centric. Yet, it has already gained recognition in the United Kingdom, where the book was released earlier this month. UK readers will benefit from Kendi’s study not least because, as the author points out in an early chapter, the racist ideas of New England’s 17th-century founders were “inherited from the English thinkers of their generation,” and from European explorers and colonists. Kendi stresses: “These racist ideas were nearly two centuries old when the Puritans used them to codify New England slavery.”

In his lengthy narrative, which he labels an “entire history of racist ideas,” Kendi canvasses centuries of discourse on the meaning of blackness, black oppression, and racial discrepancies in the United States from a diverse group of historical icons, intellectuals, scholars, activists, journalists, politicians, and spokespersons about race.

For Kendi, three discrete schools of thought (segregationists, assimilationists, and antiracists) have sought to make sense of racial disparities, to argue, that is, “why Whites have remained on the living and winning end, while Blacks remained on the losing and dying end.” Though he invests more in unpacking the ideas of those who are clearly antiblack racists (for Kendi, that’s anyone who espouses “any idea supporting” the notion that black people are “inferior in any way to another racial group”), he underscores that antiracists have battled not only the obvious enemies (racists and segregationists) but also assimilationists, a group of white and black thinkers whose sometimes subtle and harder to distinguish racist ideas are often overlooked. 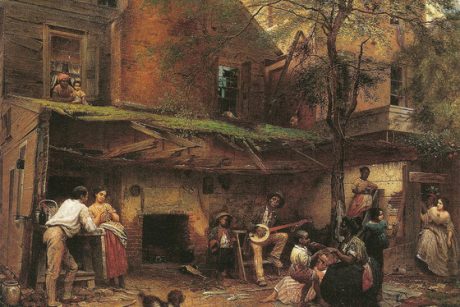 The Year of Black Memoir

Stamped from the Beginning is organized chronologically and subdivided into 37 succinct chapters, over whose course Kendi showcases the lives and thought of five historical figures who, in his estimation, profoundly shaped racial discourse in the United States. Puritan minister Cotton Mather, “Founding Father” Thomas Jefferson, abolitionist William Lloyd Garrison, W. E. B. Du Bois (the father of the black intelligentsia), and radical activist Angela Davis serve as what Kendi calls his “tour guides” to traverse “the landscape of racial ideas” in five major time periods: 1) the 15th century through the 1720s, 2) the 1740s through 1826, 3) the first several decades of the 19th century through the early years of Reconstruction, 4) the years of Du Bois’s long life, 1868–1963, 5) and the early 1960s through the first decade and a half of the 21st century.

By embracing a longue durée approach and by critically revisiting the thoughts of seemingly countless writers, scholar, and historical icons in an era when historical hyperspecialization appears to reign supreme, especially among historians of his generation, Kendi shows himself to be ambitious, a refreshing throwback, and even courageous. Without doubt, historians could legitimately debate Kendi’s choice of “tour guides,” and even replace them with others who might generate equally effective conclusions and arguments.

Kendi’s fluid narrative, however, is not primarily targeted at professional historians intimately familiar with his subject matter and the lives and thoughts of his “tour guides.” After all, much has already been written on how racist ideas have operated in colonial North America and the United States, and biographies of his case studies, with the exception of Angela Davis (the only one still alive), abound.

The underlying value of Kendi’s volume is not necessarily that it starkly revises either how the history of racist ideologies in the US has been interpreted or how we unravel the thought of prominent American intellectuals, racial theorists, and social commentators and activists. With this contribution, rather, Kendi has offered an accessible and insightful interpretation of a complex history and joined the ranks of the ever-expanding 21st-century black public intellectual caucus, a diverse and talented group who Michael Eric Dyson has recently called the “new black digital intelligentsia.”

In other words, Kendi is becoming a nationally and internationally recognized spokesperson on the history of US race relations. As a National Book Award winner, he has lectured throughout the nation, appeared on shows like C-SPAN2’s Book TV, been the subject of countless online reviews and blogs, and become more active on Twitter (at this point he has more than 14,000 followers).

Abolitionists and “progressive” white scholars and policy makers have all too often been credited with being implicitly antiracist.

Eloquently written, free from excessive academic jargon, and truly absorbing, Stamped from the Beginning is accessible to nonspecialists and would, for instance, make an exemplary text for undergraduate courses on African American history or US race relations. It also offers multiple points of departure for useful discussions and debates, such as his conceptualizations of the “causal relationship driving America’s history of race relations” (i.e., “racial discrimination –> racist ideas –> ignorance/hate”), the racist ideologies of assimilationists (from abolitionists to black leaders to white liberals), the class racism exhibited by various proponents of self-help and “uplift suasion” (“based on the idea that White people could be persuaded away from their racist ideas if they saw Black people improving their behavior”), and the different types of racism that Kendi mentions (historical, gender, class, and queer racisms).

Kendi’s ruminations on the assorted racist ideas of whites like Mather, Carl Linnaeus, Jefferson, Harriet Beecher Stowe, Josiah C. Nott, Carl Van Vechten, the authors of The Bell Curve (1994), and many others are not surprising. There is no shock value here. Yet, his critiques of the often subtle expressions of racist ideas articulated by white intellectual assimilationists like Ruth Benedict, Gunnar Myrdal, and Nathan Glazer are significant, especially arriving in what has been mislabeled our “postracial” era. All too often, abolitionists and so-called progressive white scholars and policy makers have been credited with being implicitly antiracist.

Still and all, Kendi does directly challenge how we, especially African American historians, have tended to celebrate black freedom fighter historical icons. Citing Nat Turner, Zora Neale Hurston, Harlem Renaissance artists, Malcolm X, Angela Davis, and a few others as exceptions, Kendi argues that many black spokespersons and activists, including David Walker, the editors of the pioneering Freedom’s Journal and other so-called “racist free Blacks,” Frederick Douglass, W. E. B. Du Bois, Michele Wallace, and President Barack Obama at points in their lives reinforced dimensions of racist and/or classist thought, despite their genuine efforts to combat antiblack discrimination and oppression.

For example, Kendi asserts that Walker, in his famous Appeal to the Coloured Citizens of the World, acted as a racist (specifically a proponent of “historical racism”) by degrading African Americans and their African ancestors. He adds: “These racist ideas diluted Walker’s message, and yet it was still intoxicatingly antiracist.” In evaluating Du Bois’s 1897 speech-turned-essay, “The Conservation of Races,” Kendi observes that “Du Bois reinforced as much racism as he struck down.” Further, he maintains that Du Bois continued to use certain racist ideas until the last third of his long life, when he increasingly embraced antiracist socialism. In these cases, Kendi’s pinpointing of racism should be read with caution and scrutiny. 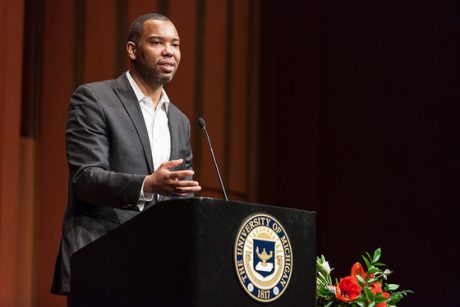 Black feminist scholars might question Kendi’s characterization of Eldridge Cleaver’s so-called “regal attraction to Black women” as being “uniquely antiracist”; black popular culture scholars might be somewhat perplexed by his celebration of F. Gary Gray’s film Set It Off; and hip hop studies scholars may find his references to rap music simplistic. Given the scope of Kendi’s study, these are but minor issues.

In his “Prologue,” Kendi asserts that his book “rewrites the history of racist ideas” by complicating the preexisting, dominant “historical storylines.” How one determines to what extent Stamped from the Beginning revises and contributes to the history of racist ideas in the US is inevitably influenced by what one has read about this history. For me, the ultimate significance of Kendi’s sweeping narrative is severalfold.

One, he will help spark debates about the emergence and evolution of racist thought in the US, particularly since the nation’s founding years. Two, he employs a critical, almost iconoclastic, approach in scrutinizing how progressive white reformers and scholars thought and wrote about black people. Three, he draws vital connections between the past and the present, emphasizing that antiracists need to develop new and innovative strategies—far beyond self-help, racial uplift, and educational reform—to “root out” antiblack racist ideas.

Echoing the “We Shall Overcome” mantra that Martin Luther King Jr. evoked in his final sermon, Kendi ends his book on an optimistic note. “There will come a time when racist ideas will no longer obstruct us from seeing the complete and utter abnormality of racial disparities.” Given the deep history and persistence of racist thought that has profoundly characterized American culture, the historian in me is somewhat skeptical of Kendi’s sanguine predictions. One thing is sure. Stamped from the Beginning will be read by future generations. It has the potential to become a classic, must-read chronicle in the vast historiography on antiblack racist thought in the United States. 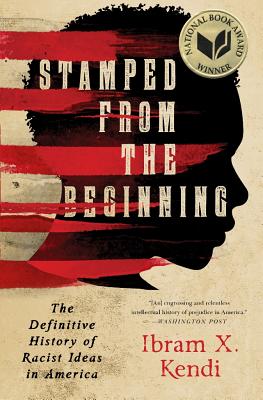 Stamped from the Beginning: The Definitive History of Racist Ideas