See How The City Divides Us
In New York the preference is for discrete rails or sharply sloped surfaces, in London polished studs do the trick; San Francisco opts for boulders, and Lima has no ... 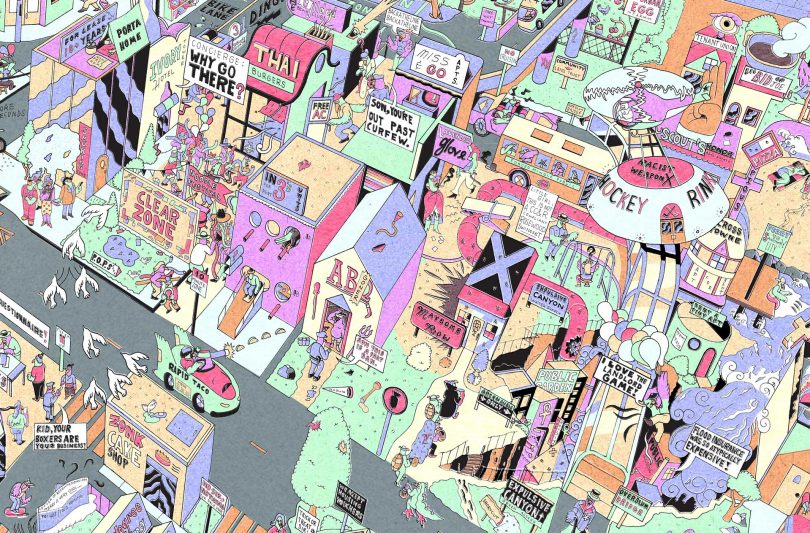 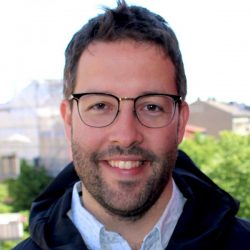 In New York the preference is for discrete rails or sharply sloped surfaces, in London polished studs do the trick; San Francisco opts for boulders, and Lima has no problem sprinkling concrete ledges with broken glass. These methods—and many more—aim to keep the homeless, and others, from sitting and sleeping on the surfaces of the city.

In our highly designed urban spaces very little is accidental: hard stools in coffee shops and restaurants ensure brisk customer turnover, classical music in malls drives away teenagers, and plantings subtly direct pedestrians away from high-income neighborhoods. When one becomes cognizant of the armrests on benches that hinder sleeping, or handrail designs meant to thwart skateboarders, these elements begin to appear everywhere in the built environment. After going through The Arsenal of Exclusion & Inclusion it becomes impossible to pass a sign or stairwell without interrogating whom it was designed for and whom it shuts out.

Antisocial interventions in the local streetscape presaged the new age of exclusion we are now entering, based on walls and hardened borders. This is not just along the United States–Mexico border, but also on the edges of Europe, North Africa, and Southeast Asia, where bigger walls, razor wire, and vigilante patrols are the physical stand-ins for an uptick in ethno-nationalism and inequality.

Beyond these obvious examples, smaller-scale slights against the “brotherhood of man” abound. In the United States, distrust and stratification along class lines are rendered in steel and concrete across our metropoles in the form of fences, berms, security desks, and access codes. And these slights, many of them small, add up.

Covering slights big to small, The Arsenal of Exclusion & Inclusion does an exemplary job of cataloging these attacks on the publicness of the city. Assembled by the principals of the architecture firm Interboro and amply illustrated, the tome includes contributions from more than four dozen scholars and practitioners. It brings together disparate strands of criticism and activism to document the production of hostile spaces and what we might do to fix them.

The book sets out to find what makes for an open city and how tolerance and diversity are substantiated in the built environment. The creators opted not just to inventory the arms of exclusion but also to include “weapons of inclusion,” a shrewd decision, even if the tools for inclusion can feel somewhat lacking in firepower. They do not attempt to differentiate between the two, noting “the line between exclusion and inclusion can be very fuzzy indeed, since what seems exclusionary to someone might seem inclusionary to some other.” 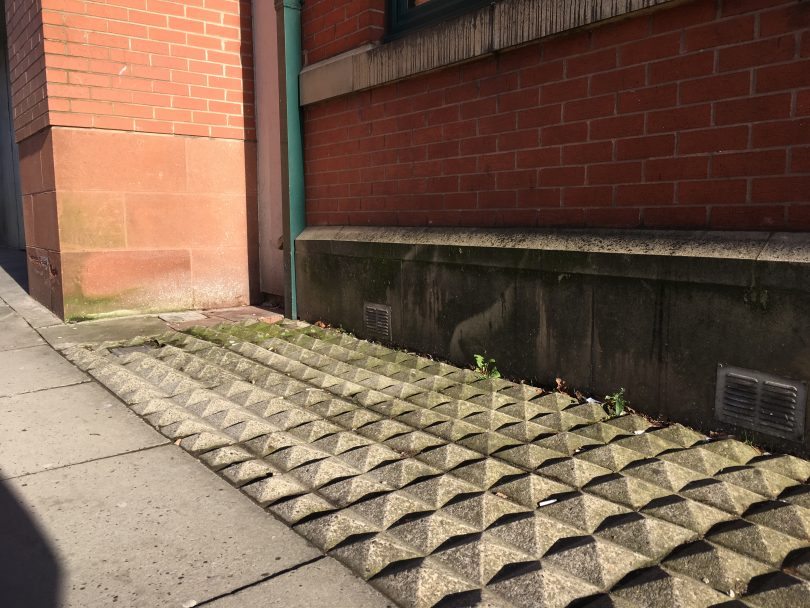 SLIDESHOW: Elements that appear to be ornamental can have a deterrent function as well, particularly in making areas uncomfortable to sit or hang out in. Photograph by Sam Holleran

Boulders and rough surfaces under bridges and other areas are used to impede homeless and make it difficult to sleep in these areas. Photograph by Marian Dörk / Flickr 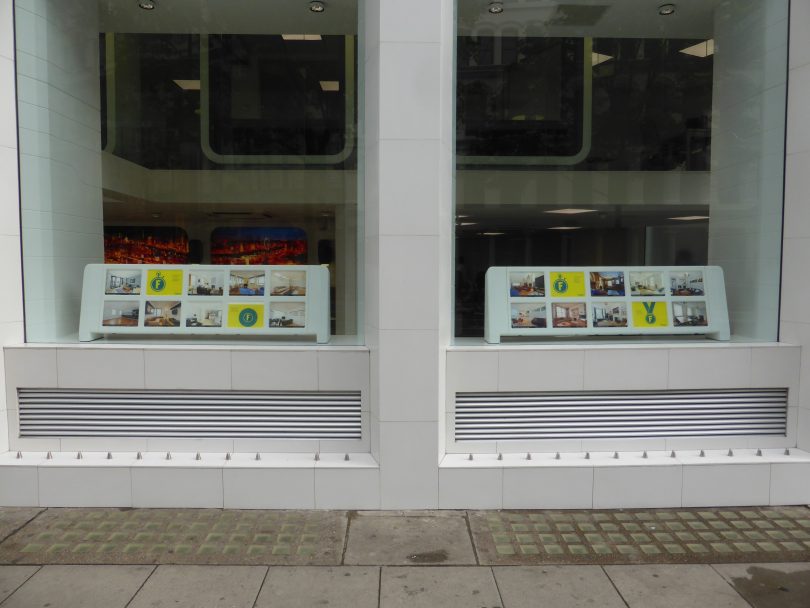 Social media has increased the visibility of anti-homeless spikes and fencing. When UK columnist Ryan Brown tweeted out images of spikes, rails, and bars on English street furniture, calling “anti-homeless architecture … one of the most depraved, hateful, unsympathetic things our species has ever created,” it was “liked” nearly 100,000 times. Photograph by Duncan C. / Flickr 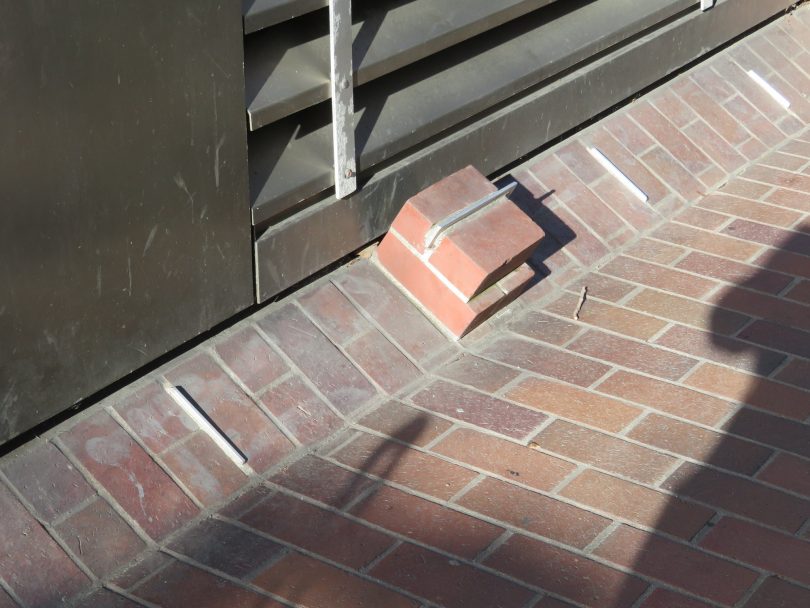 Many of the physical devices used to deter unwanted uses of public space are deliberately oblique, such as this anti-skateboarding renovation at the edge of a plaza. Photograph by Elf Sternberg / Flickr 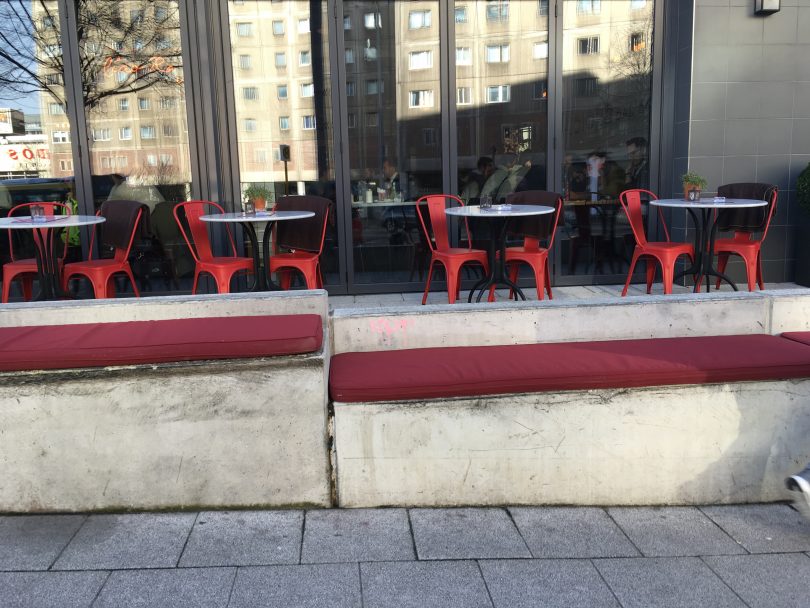 The push-and-pull of urban space: a ledge once used for skating has been repurposed as outdoor seating by an upscale cafe. Photograph by Sam Holleran 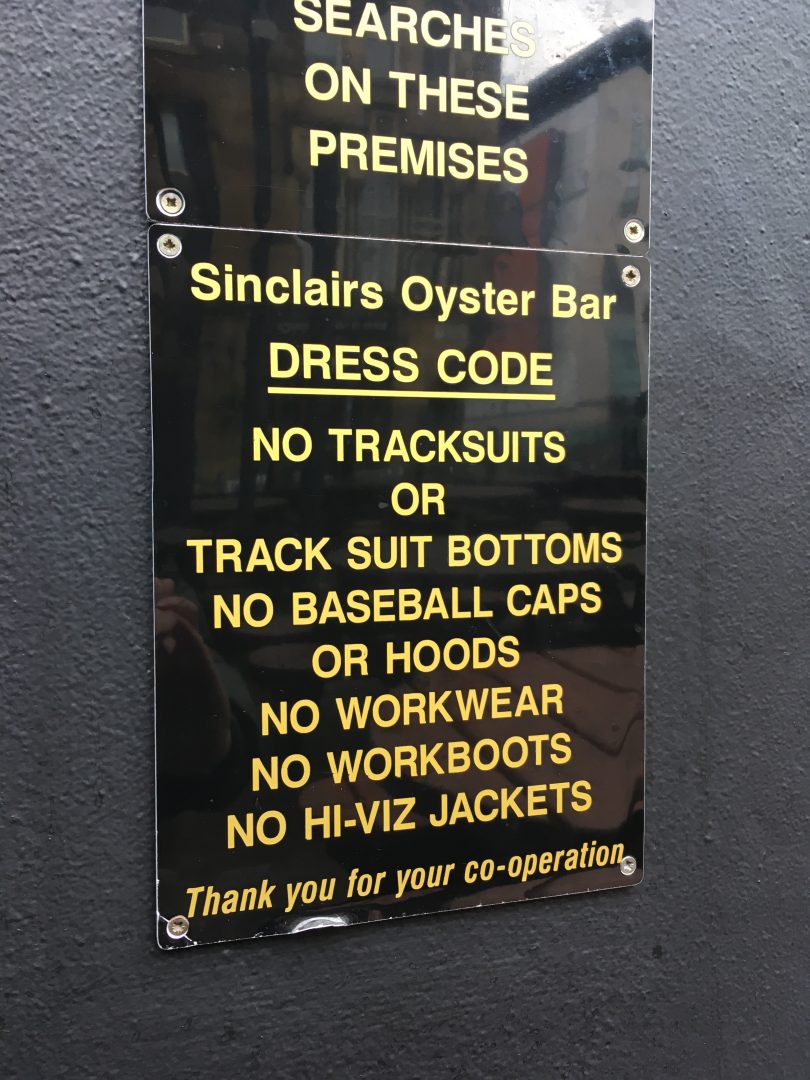 A dress code for a bar inventories forbidden clothing, focusing on items frequently worn by immigrants, men of color, and workers. Photograph by Sam Holleran 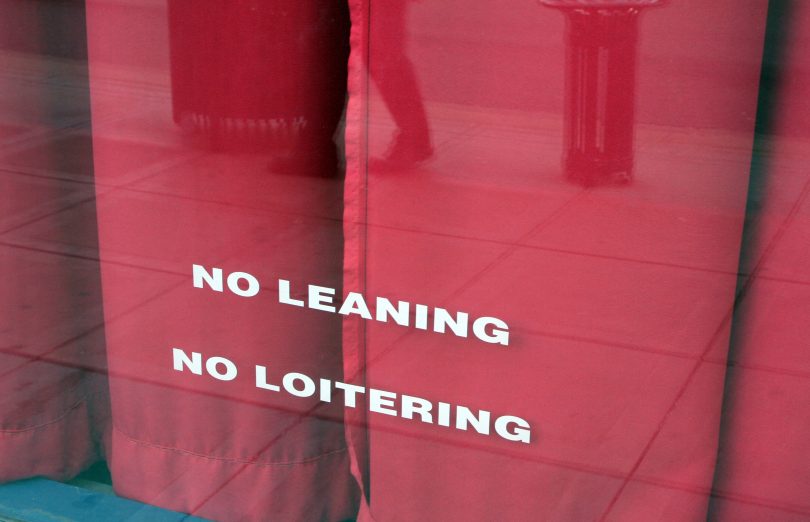 “No Loitering” signs are common features in North America cities, but the application of these rules is, more often than not, tinged with prejudice. Photograph by Sharon Mollerus / Flickr

Some tools—like curb cuts—are relatively uncontested in their public good. Developed after the Second World War for disabled veterans and mandated by the Americans with Disabilities Act of 1990, curb cuts have scores of secondary beneficiaries beyond people who use wheelchairs, including parents with strollers, skateboarders, cyclists, and workers pushing heavy hand trucks.

However, other tools prove harder to evaluate. The use of housing covenants, for example, is often associated with racism and the “restricted communities” of the first half of the 20th century (these developments, primarily located in new suburban rings, often advertised their exclusion of Blacks, Jews, and other minority groups as a selling point), but unique covenants have been used to improve the lives of select groups, like in the case of a retirement community for postal workers (presumably tormented by a lifetime of barking and bites) that forbids canines. Other communities based on some degree of restriction try to create opportunities for old folks or protect those with extreme allergies.

The book is determined to show that whenever humans come together in close proximity there will always be trade-offs and concessions to be made. Sharing space means sharing resources. This is what made cities such fertile grounds for human advancement in ancient times: they allowed for greater degrees of specialization in a variety of fields. However, living close to others isn’t easy. In some cities, civic cooperation and trust have fallen away and been replaced by suspicion and strife.

A generation ago the rise of “edge cities” and telecommuting led some to write off the importance of large urban areas, but today it appears that if we are to continue to reap the rewards that cities bestow we must grow them exponentially. Within this framework of ever-increasing urban settlement, we find a variety of ingenious ways to keep our fellow human beings at arm’s length.

Man-made symbols of exclusion are not new; they have been with us for a very long time. The infrastructural and cultural militarization of border regions has been well documented (with the work of Teddy Cruz and Fonna Forman in San Diego-Tijuana serving as a particularly striking example), but the violence of borders comes as little surprise—we have grown inured to it. We are far more moved by examples of architectural enmity in cities. These have become symbols of oppression: from the Berlin Wall to the townships of apartheid South Africa and the roadblocks of Jerusalem.

When browsing through this repository it is easy to see how some of the localized conflicts it details have already begun to jump in scale. In some cases, these issues are picked up by the national news media; for example, “Stop the Sag!” campaigns that target men with low-hanging pants have recently transformed into State House skirmishes. Other problems seem to have been rectified in one locale only to crop up in another, as ne’er-do-well developers and others skirt the rules and find loopholes. For example, when inclusionary zoning produces affordable units in market-rate developments, “poor doors” suddenly come into play.

The book works as a sort of “Birds of America” for spotting examples of constructed nastiness.

The disparities that exist in cities can boomerang out to affect far larger areas. The siting of shipping and sanitation facilities in New York City was called into question by environmental justice advocates who contended that low-income communities of color bore far more than their fair share of noxious facilities. That problem has improved to some degree, and the city has tried to mitigate some of the nuisances with new models like Riverbank State Park, where a new park was created in tandem with an odorless wastewater treatment facility.

However, wealthy cities like New York are also in the process of out-of-sight-and-out-of-mind-ing their problems: paying to ship their trash over state lines to lower-income regions and siting homeless shelters at the city’s very edge, on the Westchester and Nassau county lines. When we look for exclusion and inclusion, setting our scope to the scale of the city—or even the metro region—may no longer be sufficient.

The Arsenal of Exclusion & Inclusion is distinctly American. There’s not much on tools of exclusion deployed in, or between, countries outside the United States (although it does examine policies directed at immigrants, with stand-out sections on the the Chinese Exclusion Act and the sanctuary cities movement). Putting the urban exclusions of the United States in hemispheric context would be valuable, because divisions in urban space often come with an unfavorable comparison to Latin American cities. “Brazilification,” a term coined by Douglas Coupland in his 1991 novel Generation X, is used as a shorthand to intimate what happened to places where you can no longer take your dog for a walk without fear of kidnapping. In this reading, São Paulo and Caracas are the ultimate dystopian poleis: places where the wealthy no longer trust the roads and prefer to zip around in helicopters, and where the poor are pushed to increasingly dismal favelas.

It’s worth noting that both property ownership by elites from more dangerous countries and inequality are causing the builders of New York’s new high-rises to install previously unheard-of apartment features like panic rooms and bulletproof glass. These new security features spatially segregate and marginalize in ways that The Arsenal of Exclusion & Inclusion, with its focus on the more polite barriers of years past, can’t readily imagine.

The Arsenal is a collection of small interesting thoughts: each entry comes with illustrative picture and diagrams as well as quotes from stakeholders on many sides of an issue. There are a number of fascinating stories, movements, policy tools, and little-known anecdotes that the book clues you into. The book’s power lies in how it works as a sort of Birds of America for spotting examples of constructed nastiness. 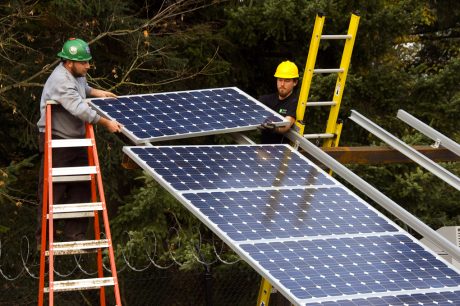 However, when forms of exclusion aren’t physicalized they can be more difficult to perceive. Finding exclusion in the built environment—whether it’s spikes or “no loitering” signage—is visceral and upsetting. However, in focusing on physical manifestations we forget that many of the exclusions that had to be made manifest “IRL” 10 years ago can exist solely online today.

The book gives the example of a “bouncer,” noting that while their formal job description requires that they keep underage and visibly drunk people out of venues, their less explicit task “is to control the social makeup of the participants inside.” What once required the blocking of a doorway (usually by a very large man) can now be neatly achieved via invite-only events that occur in secret locales. As cities grow “smarter” and access is increasingly linked to digital profiles, the venues in which culture happens are often further afield and less accessible to people who aren’t in the know.

The Arsenal of Exclusion & Inclusion provides one with several tours that use objects to help you understand the hardening of our public spaces and the erosion of our social fabric and communal trust. But there are also trips through the book that spotlight the everyday people working for accessibility in cities and the activists spearheading movements for change. The book helps one understand—visually and intellectually—how we arrived at the built environment we have today and how we might begin to retrofit it for equity. 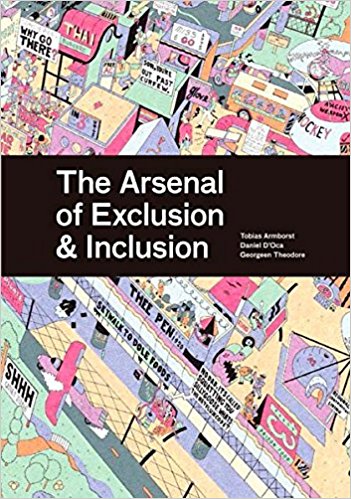 The Arsenal of Exclusion & Inclusion