Shadow-Dancing with Zadie Smith
There is a scene in Swing Time, the 1936 George Stevens musical that gives Zadie Smith her new novel’s title, in which Fred Astaire, through a series of comic mishaps, enrolls in a dance lesson with ... 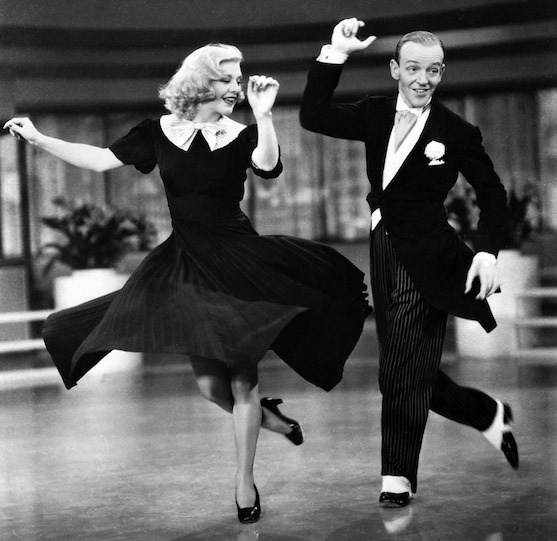 There is a scene in Swing Time, the 1936 George Stevens musical that gives Zadie Smith her new novel’s title, in which Fred Astaire, through a series of comic mishaps, enrolls in a dance lesson with Ginger Rogers. Pretending to be an absolute beginner, he fools her into believing he has two left feet. An exasperated Rogers tells Astaire he’s impossible to teach; Rogers’s boss overhears and fires her on the spot. To save her job, Astaire grabs a bewildered Rogers and the two execute a breathtaking duet. Astaire is all bent knees and footwork, while Rogers, with her long legs and hand in his, performs their steps, as the memorable phrase has it, backwards and in high heels; she is the fair-haired shadow of his relaxed and easy abandon. The world melts away in the effortless spontaneity of their synchronized steps.

An hour further into the film there’s a dance scene that’s equally famous, if for different reasons. “Bojangles of Harlem” opens center stage with a chorus line of 24 scantily clad women splitting apart two giant pinstripe legs to reveal Astaire, in blackface (the camera’s perspective is enough to make your jaw drop). With white gloves, a porkpie hat, and a grin from ear to ear, Astaire dances the lexicon of blackface minstrelsy—busy footwork, heel and hand slaps, knee, hip, and arm movements alternating between floppy abandon and stiff restraint—that projects the racial stereotypes that, since the mid-19th century, have formed an integral part of white America’s social identity and cultural power.1 Executing the sweeping geometrical patterns typical of Hollywood’s golden-era musicals, the chorus surrounds “Bojangles” in a dance sequence that is as shamelessly sexualized as it is nightmarishly racist. The scene concludes with a quartet featuring Astaire and three silhouettes projected behind him. Dancer and shadows move in unison; the shadows then split from their substance and perform their own steps. Who is the real dancer—Astaire? Bojangles? The shadows on the wall?

Smith’s Swing Time opens with a meditation on Astaire’s blackface performance. We meet Smith’s nameless heroine (let’s call her the Main Character, or “MC,” for short) just as she has been fired from her job as personal assistant to an international pop star named Aimee (think: Madonna meets Beyoncé meets Cyndi Lauper), the details leading up to which are gradually revealed over the course of the novel, though there are early hints of a betrayal and MC’s role in it. Unsure of what to do with her now 30-something jobless self, MC wanders through her native London until she finds herself sitting in the nosebleeds of the Royal Hall at a lecture by an art-house film director. The director screens the shadow quartet from Swing Time, which MC, an avid childhood fan of musicals, quickly recognizes. Seeing the clip for the first time in years prompts a revelation:

I’d lost my job, a certain vision of my life, my privacy, yet all these things felt small and petty next to this joyful sense I had watching the dance, and following its precise rhythms in my own body. I felt I was losing track of my physical location, rising above my body, viewing my life from a very distant point, hovering over it … A truth was being revealed to me: that I had always tried to attach myself to the light of other people, that I had never had any light of my own. I experienced myself as a kind of shadow.

Energized by her out-of-body experience, she returns home to re-watch the sequence, only to realize, to her horror, that Astaire is in blackface. MC, who was raised in Northwest London by a Jamaican-born mother and white father, is as shocked by her own selective memory as by Astaire’s appearance. For MC, dance provides a way to escape the self; it is also what enables her to see its extreme and disturbing forms most clearly. As dance slips from shadow to substance, from airy illusion to embodied authenticity, MC’s critical assessment of her life, which forms the novel’s through line, takes shape.

This confrontation of the self through dance propels the novel. Bringing together themes from Smith’s earlier novels, White Teeth (2000), Autograph Man (2002), On Beauty (2005), and NW (2012), that mark her now-recognizable brand of bildungsroman—cultural hybridity, questions of racial or ethnic identity and assimilation, comic irreverence, somber meditation on class and society—Swing Time unfolds against the backdrop of 21st-century pop culture and performance art. Although written in the first person, the novel focuses outward on those who shape MC’s life, all of whom are dancers.

Parallel to the story of MC’s professional career is another story with hints of betrayal, centered around her childhood friend Tracey, MC’s biracial opposite (white mom, black dad), who is volatile, rebellious, and prone to conspiracy theories. In contrast to MC, Tracey is comfortable in her skin. Tracey excels in their dance classes and pursues a professional stage career; MC settles into her role as observer, which the novel traces from her adolescence into adulthood. “I really felt that if I could dance like Tracey I would never want for anything else in this world,” MC recalls. “Other girls had rhythm in their limbs, some had it in their hips or their little backsides, but she had rhythm in individual ligaments, probably in individual cells.” We see how MC’s attraction to Aimee has its origins in her complicated and at times difficult friendship with Tracey; like Tracey, Aimee is a talented dancer, whose self-confidence, Girl Power mantras, and accent that is “New York and Paris and Moscow and LA and London combined” are charming and seductive. Also in the mix is Lamin, the thorny love interest MC develops during her trips to Gambia as part of Aimee’s misguided humanitarianism, who moves easily between social identities, cultures, and customs. Straddling both narratives is MC’s mother, a self-educated political activist who dances through social justice battles, seemingly uninterested in her daughter’s life. Taken together, these figures lead MC to understand relationships as a delicate dance of trust and betrayal, and dance itself as the achievement of self-command and personal liberation. “But to me a dancer was a man from nowhere, without parents or siblings, without a nation or people, without obligations of any kind, and this was exactly the quality I loved. The rest of it, all the detail, fell away.”

Yet Smith knows better than to feed MC’s fantasy of limitless shapeshifting, of dance as a force for freedom or authenticity. The novel rejects the seductive contemporary notion of dance as immune to national identity, race, politics, and culture, a mindset that made MC selectively blind as a child to the racial politics of Astaire’s dancing. Dance, at least in the Western theatrical tradition, developed in the 17th century alongside the consolidation of monarchical power under Louis XIV, who more or less invented the staged dance spectacle as we’ve inherited it today. Until the mid-19th century, the dancing body was a diagnostic of social aptitude, sexual availability, or political affiliation; with the rise of eugenics and physiognomy, physical movement became a rubric for racial purity, mental ability, and reproductive fitness. It was not until the development of “expressive dancing” in the 20th century—what we today call “modern dance”—that the idea took hold that dance sits somehow outside of society, culture, and time. 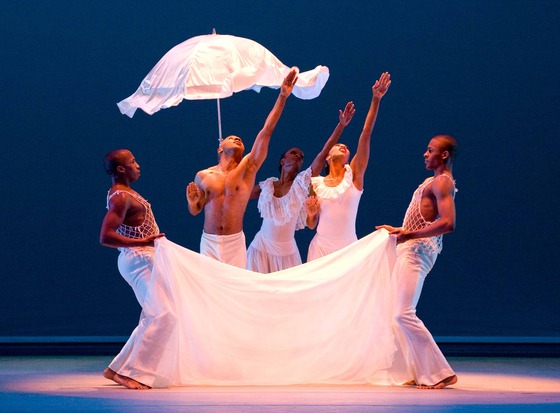 Swing Time is full of descriptions of dance in its pop cultural, high modernist, and indigenous forms; it uses the childhood dance class, the gloss of the entertainment industry, and even the details of everyday movement to break down the fallacy of dance as a timeless or universal expression. From her opening revelation, MC’s experience of dance is inescapably political. Modern dance, for example, becomes a metaphor for MC’s biracial identity and its attendant confusions. “Could ballet shoes be worn for modern? What was modern? There was no one you could ask, no one who’d already done it, you were stuck. It was a rare mother whose curiosity extended to calling the number written on home-made flyers stapled to local trees. Many girls who might have made fine dancers never made it across that road, for fear of a home-made flyer.” Elsewhere in the novel, dance is a frame to understand patterns of influence and power. “Picasso would be incomprehensible to Rembrandt, but Nijinsky would understand Michael Jackson,” MC notes. Smith’s point here is cleverly suggestive. Does Nijinsky, a virtuosic dancer who was bisexual and schizophrenic, understand Jackson, with his own legacy of virtuosity, mental illness, and sexual ambiguity, because of the nature of their physical movement, or because of their shared social marginality?

Swing Time’s investment in revealing the embedded contexts in which self-expression like dance labors makes us wonder if MC is, in fact, a shadow of others. As the details of MC’s various betrayals of Tracy and Aimee come to light, she finds herself, once again, watching dance in a dark theater. This time it’s Alvin Ailey, the icon of black dance in America. MC befriends a couple sitting next to her, who remark, “It’s nice to see Revelations with someone who hasn’t seen it fifty times,” an observation both funny and tragic. Funny, because anyone interested in dance has probably seen Revelations at least 50 times (and is likely sick to death of it), and tragic, because it’s unclear how an appreciation of Ailey could assist MC’s social or psychological integration. Ailey’s work, as Smith knows, could be considered a pioneering staging of black identity within a high modernist aesthetic, or as modern dance’s greatest commercial success, a symbol of racial assimilation, dance consumerism, and a black politics made palatable to global white audiences.2

So where does this leave the education of MC, her Bildung? If there is one thing that Smith makes clear, it’s that the dancer and the dance are not the same thing. In other words, Fred Astaire is not Bojangles, though we are certainly free to judge him for assuming that role. Likewise, the characters in the novel who appear to transcend the particularities of their lives and their social circumstances are the figures who are most constrained by them. Aimee and Tracy steal the show, yet they are incapable of critical self-reflection, while their strong sense of self inhibits meaningful insight into the nature of their connections to other people. MC, on the other hand, may be perpetually waiting in the wings, but she is in a state of continual reflection—about herself and her relationships with others—to which the book bears witness. Here, in the space between self and shadow, dancer and dance, a critical distance emerges. Swing Time is a much-welcome celebration of this split, even if it leaves us alone, dancing in the dark. 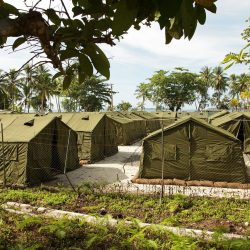 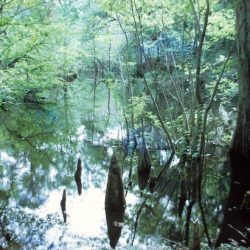