The Bingewatch: Mother Winona
Since its release last July, Stranger Things has been praised as an “original,” “meticulous” homage to the Great Men of 1980s popular culture (Carpenter, King, Lucas, Spielberg) ... 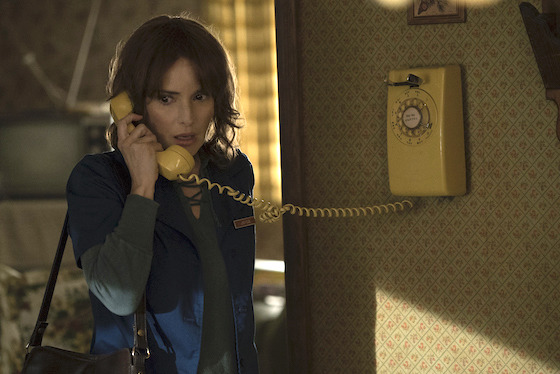 Since its release in mid-July, Stranger Things, Netflix’s new drama / thriller / 1980s period piece, has been praised as an “original,” “meticulous” homage to the Great Men of 1980s popular culture (Carpenter, King, Lucas, Spielberg). The series, created by the Duffer Brothers, has also been heralded as Winona Ryder’s big “comeback” moment. In Stranger Things, Ryder plays Joyce Byers, a single, working mother who displays textbook signs of mania after her preteen son Will (Noah Schnapp) mysteriously goes missing. While law enforcement adopts a rational approach to finding the lost boy, Byers hears her child’s breathing in the hisses and clicks of telephone static, and becomes convinced that he is communicating with her from an elsewhere beyond reason.

By aligning viewers with Byers, it has been said, Stranger Things upends the “hysterical woman” stereotype.1 The men in charge of recovering Byers’s child might initially write her off as crazy, but we just as quickly come to see her as a prescient woman trapped in a patriarchal world. If Stranger Things avoids the Hysterical Woman trope, though, it handily replaces it with another one: that of the Sacrificing Mother. For Byers’s every move is propelled by her maternal need to recover her lost boy. And—until the rest of the mostly male cast gets wise to the “stranger things” that are happening all around them—only Byers and one of the show’s few other female characters, the androgynous young escapee “Eleven” (Millie Bobby Brown), have the medium-like ability to glimpse the “Upside Down,” the dark dimension where Will Byers is trapped. Since the act of mediation is exhausting and involves a profound expenditure of self, both Eleven and Joyce Byers ultimately become deeply sacrificial figures.2

This is why I bristle at the most casual intimation that Stranger Things is somehow more gender-conscious than the boy-centric cultural texts from which it draws (see also the facile claim that the show celebrates Eleven’s “girl power” by giving her superhuman abilities). While Stranger Things receives plaudits for updating its 1980s source material, its gender politics would not in fact feel out of place in that decade, to say nothing of its racial politics, which are noticeably and resolutely colorblind.3 As the queer feminist playwright Gina Young recently put it, “Stranger Things is so, so good. BUT DOES IT EVEN PASS THE BECHDEL TEST THOUGH?”4 After a long thread of impassioned responses to this rhetorical Facebook post, the answer remained a resounding “no.” Stranger Things
might have a few “complex female characters,” but they aren’t given the freedom to discuss subjects other than boys and men.

Even as a 36-year-old lesbian feminist, I’m still overidentified with Jennifer Connelly’s character in Labyrinth (we’re both named Sarah with an h!), and thus pretty much the target demographic for the product Stranger Things is shilling. Just as I’m willing to overlook the fact that Sarah’s erotic, spandex-riddled quest through the Goblin King’s maze is motivated by her colicky baby brother’s disappearance, I’m able to suspend my irritation at the Duffer Brothers’ compulsion to center their show on adolescent boys (however “sensitive” or even “queer” those boys may be). I don’t know much about these guys, but I know they’re not the Wachowskis. They’re clearly not out to make feminist or queer TV. What I find extra galling, however, in the hype surrounding Stranger Things, is the unnecessary suggestion that the Duffer Brothers are somehow responsible for Winona Ryder’s comeback.

Winona is so good in the role of Joyce Byers, the crazy-seeming-but-not-actually-crazy sacrificial woman, not because it’s the part of a lifetime; she’s so good as Byers because her own life and career have trained her to play this role really well.

Before, during, and after her trial for the widely publicized “shoplifting incident” of 2001, the media cast Ryder as a hysterical woman. Opining that Ryder “fits the profile of a kleptomaniac,” one Time reporter added, “Just look at her screen roles, which range from the disturbed (Beetlejuice and Girl, Interrupted) to the homicidal (Heathers and The Crucible).”5 The “Free Winona” T-shirt became a hipster accessory, more ironical than feminist. After a brief career hiatus, Ryder went back to acting, though she never quite shook off that image of instability. In Darren Aronofsky’s Black Swan (2010), she plays a washed-up ballerina, a faded flower forced into retirement. The indignity of being replaced by a younger, more nubile young dancer eventually leads Ryder’s character to attempt suicide.

To claim this as the moment of Ryder’s “comeback,” then, is an exaggeration. Yet Ryder’s wrenching, at times darkly humorous, portrayal of Byers—a woman peering wide-eyed into the hidden abyss that threatens to engulf the sheltered suburban-rural enclave of Hawkins, IN—does feel like a return to form. Because from Beetlejuice and Heathers (both 1988) to Edward Scissorhands (1990) and Girl, Interrupted (1999), the Lo-Fi, Not-So-Manic Pixie Dream Girl of ’90s cinema spent much of her early career playing the parts of existentially curious young women drawn to the underbellies of privileged white (frequently suburban) existence. Often ironical, but always moral and more-or-less sane, Ryder’s characters were dangerously attracted to “bad boys,” “bad girls,” and potentially threatening supernatural beings. But they always ended up on the side of the good, the right, and the just.

If “Stranger Things” avoids the Hysterical Woman trope, it handily replaces it with another one: that of the Sacrificing Mother.

There’s one such type in Stranger Things: Nancy Wheeler (Natalia Dyer), the older sister of Will’s BFF Mike (Finn Wolfhard). This studious but sexually curious teen discovers the evil that lurks beneath the town after her dorky BFF Barb disappears while Nancy is off losing her virginity to Hawkins’s local obnoxious rich kid Steve (Joe Keery). In her late teens or early 20s, Ryder herself might have scored the role of Nancy. As an actress in her 40s, she has already weathered the awkward transition from the Coveted Girlfriend role to that of the Invisible Wife and/or Beleaguered Mother.

As it turns out, Ryder has long felt sympathy for beleaguered mothers. In 1993, nearing the height of her status as a Gen X male fantasy (somewhere between Johnny Depp’s “Winona Forever” tattoo and Dave Pirner’s white dreads), the then 22-year-old actress became involved in real-life efforts to rescue a 12-year-old abductee named Polly Klaas. The girl had been kidnapped at knifepoint while hosting a slumber party at her mother’s home in Petaluma, CA, and Ryder put up a $200,000 reward for her safe return. A small West Coast town reminiscent of Stranger Things’ Hawkins, Petaluma was where Ryder herself had grown up from age 10 onward. Ryder remained close with Klaas’s divorced parents after it was discovered that the girl had been murdered. Ryder’s 1994 performance in Little Women was dedicated to Klaas, who’d apparently loved the book. More than 20 years later, the actress continues to serve as a high-profile supporter of the Polly Klaas Foundation, a nonprofit dedicated to helping “frantic” mothers and fathers find their missing offspring.

Did Ryder’s interest in Polly Klaas stem from her identification with the vulnerable image of the girl, so evocative of the missing children pictured on the milk cartons of Ryder’s own 1980s childhood? It’s hard to know what drew her to the Klaas case, or to the cause of families with missing children. Whatever the impetus, Ryder has been careful to emphasize that she would never use the Klaas family’s trauma to bolster her own performance of Joyce Byers’s maternal desperation. This assertion, made in a recent interview with Time, recalls Ryder’s shameful days in court (where, it must be said, only a rich white person gets probation, community service, a few fines, and psychological counseling for criming while drug-addled and depressed). During her shoplifting trial, Ryder’s attorney cited the actress’s efforts on behalf of the Klaas family as evidence of her good character. This was, of course, a gift to the prosecution, who slammed Ryder and her lawyer for their callous use of “the body of a dead child.” 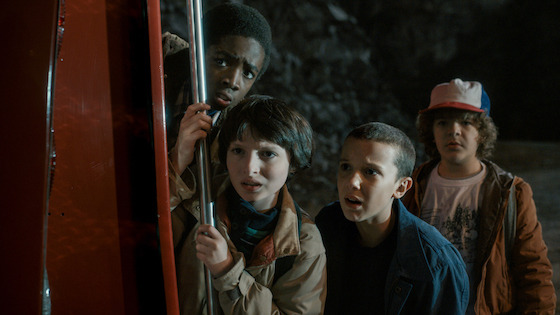 Needless to say, Ryder’s depiction of Byers is anything but callous. I’m generally unmoved by narratives of lost children, which, as is the case in so many ’80s films, tend to culminate in the saccharine reconstitution of the nuclear family. But this mother’s desperate screams into the phone at the warped sound of her son’s presence on the other end of the line, her frantic efforts to contact him via household electrical currents, and her vain endeavor to grasp his hand by clawing through the wall of her already dilapidated home, all put a giant lump in my unforgiving throat.

I’m even more touched by the all-too-fleeting moments of connection Stranger Things permits between Joyce Byers and the young girl Eleven, who, like Polly Klaas, was wrenched from her own mother by an evil man. Though Eleven suffers from PTSD, she agrees to aid in the search for Will Byers, at the potential cost of her already questionable sanity. After thanking Eleven for endangering her own well-being to reunite someone else’s family, Byers assures the girl that she’ll take care of her when things get dire (no spoilers). “I’m gonna be there with you the whole time,” Byers tells the motherless female child. “And if it ever gets too scary, … you just let me know, okay?” Sure enough, on the quest to find Will, the terrified Eleven hears a mother’s soothing voice. “Don’t be afraid,” it says, “I’m right here.” The maternal voice belongs to Byers, who is struggling to keep Eleven calm so that the girl can find the woman’s son. For a few seconds, though, it feels like the mother is comforting her own daughter, and I’m hoodwinked into believing the show’s female characters actually care about each other.

Stranger Things’ countless nods to the 1980s pop culture canon—the Goonies-style nerd squad of Will Byers’s D&D buddies; the mysterious girl whose psychokinetic abilities recall Charlie McGee’s special powers in Firestarter and the deadly talents of a certain Carrie White—make the show a listicle writer’s wet dream. The teetering ambiance created by its synthy original soundtrack, the old feelings of excitement and apprehension aroused by the chiaroscuro of bike headlights beaming into the night, are all part of the show’s nostalgic pleasures. And undeniably, they are pleasures. But if viewers come away thinking that Stranger Things is a show with Complex Female Characters, the Duffer Brothers have Mother Winona to thank.

Many thanks to my interlocutor Karen Tongson for her Ryderian insights, and to Liz Maynes-Aminzade for making me make sense.

Created by the Duffer Brothers
Netflix, 2016