The Book That Made Me: Gay
A professor of English and gender studies reveals how one’s identity can be transformed from the most unexpected sources—in this case, sports memoir … 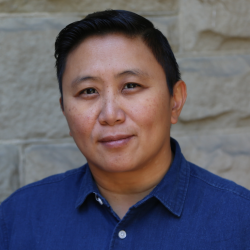 The Book That Made Me is a series about the books that have changed our lives. In this latest installment, a professor of English and gender studies reveals how one’s identity can be transformed from the most unexpected sources—in this case, sports memoir.

I was a voracious reader of celebrity autobiographies as an adolescent, and sports autobiographies were particularly appealing to me given my own sporty, competitive proclivities. Just around the time I began to feel the faint stirrings of my sexual non-normativity—at the age of 13 in 1986—I cultivated an obsession with tennis, largely because of Martina Navratilova’s dominance in the sport during that era. My interest in tennis was also stoked by my class aspirations (it was a gentleperson’s sport), and my penchant for narratives about individual rivalry, which bore itself out later in my graduate studies in Victorian literature.

Martina Navratilova and Chris Evert provided a contrast in style: Martina modeled physical prowess, a powerful serve, and an agile net game; Chris modeled a WASPy patience and reserve, slugging it out at the baseline, daring others to match her flawless ground game. Published in 1985, Martina came out at just the right time in my life—even if I wouldn’t be brave enough to come out myself for more than half a decade later.

The book’s sexual frankness drew me in, particularly during the Reagan era marked by its sex panics and silence around the AIDS epidemic. Martina detailed her conversations with Elton John, one of her celebrity pals, about their mutual, transitional bisexuality. Her attractions to specific women, and her transformative account of coming-to-terms with her own sexuality, are interwoven with taut narratives about her quest for a calendar-year grand slam. The combination was titillating to a proto-queer jock.

Her long-term romance—with a patrician beauty queen from Texas named Judy Nelson—allowed me to fantasize about a butch future of dating pretty girls. She kissed and she told, and some of the chapters bore the titles of women’s first names—the women who were most significant to her, including Chris Evert. Also apropos to the period was the book’s thrilleresque, cloak-and-dagger account of her defection to the United States from the former Czechoslavakia. From Cold War intrigue to hot homo love. What was not to like?

From Cold War intrigue to hot homo love. What was not to like?

The only thing I misunderstood about the book was my own response to it at the time. I sublimated its queer resonance and insisted that I loved the book (going so far as it to read it twice in one summer) simply because I was a huge tennis fan and admired Martina’s accomplishments on the court. I couldn’t admit that Martina offered a glimpse at a lesbian future—my queer future—that was couched in stories of victory, fame, and the heart of a champion, instead of despair, ignominy, and cowardice.

“Anybody who’s ever been in love knows the feeling of rushing off to work. My work was a match against Chris Evert or Billie Jean.”

George Vecsey was able to capture Martina’s blunt speaking style and wry Czech wit quite well. The book certainly doesn’t offer much in the way of radiant, quotable prose. But its workmanly honesty and clipped, jockish sentences are alluring nonetheless.

It is on display—with a stack of other important books, and books gifted to me—on an end table in my living room. Martina forever! 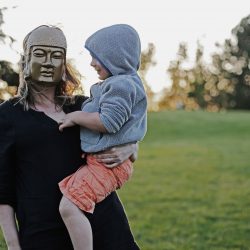 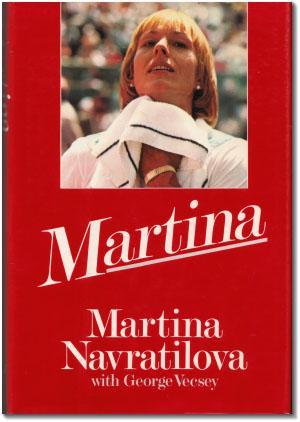