The University and the Station: A Brontë Bicentenary in Taiwan
It takes a circuitous taxi ride winding up Lianhai Road to reach Taiwan’s …

It takes a circuitous taxi ride winding up Lianhai Road to reach Taiwan’s National Sun Yat-sen University, perched atop Shaochuantou Mountain, overlooking vistas of the Taiwan Strait. At the nearby National University of Kaohsiung, the Department of Western Languages and Literatures encircles a courtyard with an idyllic pond on which float ducks, lotus flowers, and lily pads. On a balmy April afternoon, in a classroom overlooking Lotus Lake and Love River, students discussed passages from British novels with me over bento-boxed lunches.

On the occasion of Charlotte Brontë’s 200th birthday, I did not make a literary pilgrimage to her family home in Haworth, England, but instead traveled to the cities of Taipei and Kaohsiung, where I had been invited by several universities to lecture on Wuthering Heights and Jane Eyre. Because the distance between the Brontës and these Taiwanese students included not just linguistic but also vast geographical and temporal barriers, I found that the most effective way to close the gap—between Currer and Ellis Bell writing in the 1830s–1840s and university students in 2016 Kaohsiung—was through adaptation rather than translation. In my guest lectures and the group conversations that followed, we discussed relatively recent Asian and Asian American novels based on Wuthering Heights and Jane Eyre, namely Minae Mizumura’s A True Novel (2002) and Patricia Park’s Re: Jane (2015). 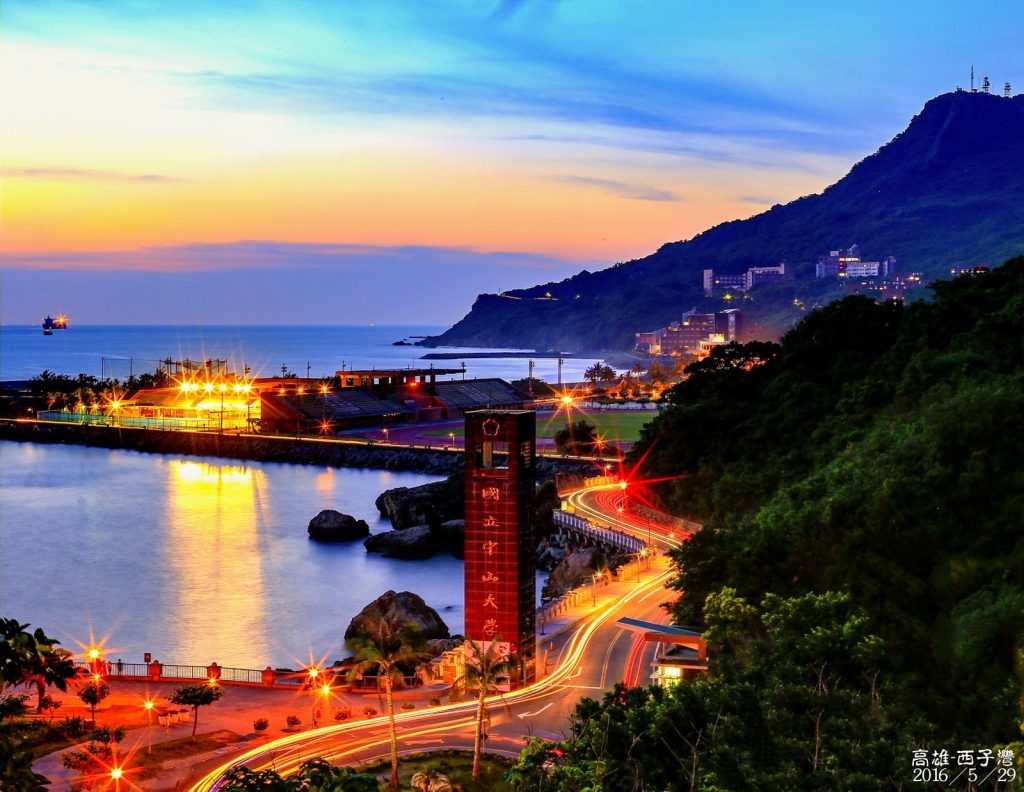 It isn’t every day that one experiences a major literary bicentenary from within a geographical locale where British literature is itself on the periphery and the margins. In universities across Asia, the popularity of English literature as a major has been in decline since its heyday from the 1970s through the 1990s. At the University of the Sacred Heart in Tokyo last year, more than a quarter of the undergraduates who declared a major in English Language and Literature had done so only as a second choice, their first-choice departments already filled up by other students. Nonetheless, in Taiwan, undergraduates at the National University of Kaohsiung still study British and American literature to gain admittance to a broader English-speaking world. Many read Dickens, Byron, and Wordsworth with hopes of working throughout Asia as civil servants, such as customs officials or diplomatic personnel. Still others improve their English with aspirations to explore the world as flight attendants for major airlines, a popular career choice among female students. They master linguistics coursework and pass required classes in listening and conversation. For their exams, they memorize passages from Coleridge’s “The Eolian Harp” and quote from Shelley’s “A Defense of Poetry.” Asked to recall the correct words to fill in the blanks (no word bank provided), they complete these exercises with a meticulousness that makes our American lecture halls appear lenient in comparison.

Graduate students at National Kaohsiung Normal University read literary theory in bound, xeroxed editions. One student eagerly shared with me her copies of Derrida and Spivak, texts precious to her because they were prohibitively expensive and sometimes illegally reproduced. She proudly showed off a photocopied edition of Can the Subaltern Speak? covered in Chinese characters, a slew of translated phrases furiously scribbled in the margins of each page. Might I perhaps mail her a proper edition of the book once I returned to the States? She shook her head no. “It took me a whole semester to translate this!”

Collapsing differences between East and West, from Victorian England to present-day Taiwan, seemed almost too easy through a Brontë lens that week. A recent talk by Talia Schaffer on emotional labor and the ethics of care in Brontë’s Villette came to life before me as I entered Taipei Station, the central hub for rail service in the heart of the city. Schaffer’s upcoming book explores the performative aspect of care in Victorian novels, of caring for someone without really caring about them. Jane Eyre and Lucy Snowe’s attitudes toward their wards, as a governess and a teacher, respectfully, fit this model; their disconnect from the children they look after is intensified by the loneliness and exclusion they experience in their places of work, spaces in which they distinctly do not feel at home.

Upon entering the Taipei train station, I was greeted by a startling sight: the center promenade, effectively cordoned off, was crowded with domestic workers sitting cross-legged on the ground, sharing home-cooked snacks, chatting, applying make-up, and braiding one another’s hair. Meanwhile, wealthier shoppers clustered in restaurants and shops along the perimeter of the station—buying boxed sushi sets, cosmetics, and plush dolls as gifts—all standing, never sitting, undeterred by the noisy laughter around them. The vertical representation of ethnic separation was visually jarring: the young workers, predominantly Indonesian or Filipino, were low on the ground, while the standing Taiwanese shoppers seemed to “see through” the hundreds sitting at the center of the station. Not a single ethnically Chinese person entered this middle area; there was no interaction between the two groups. 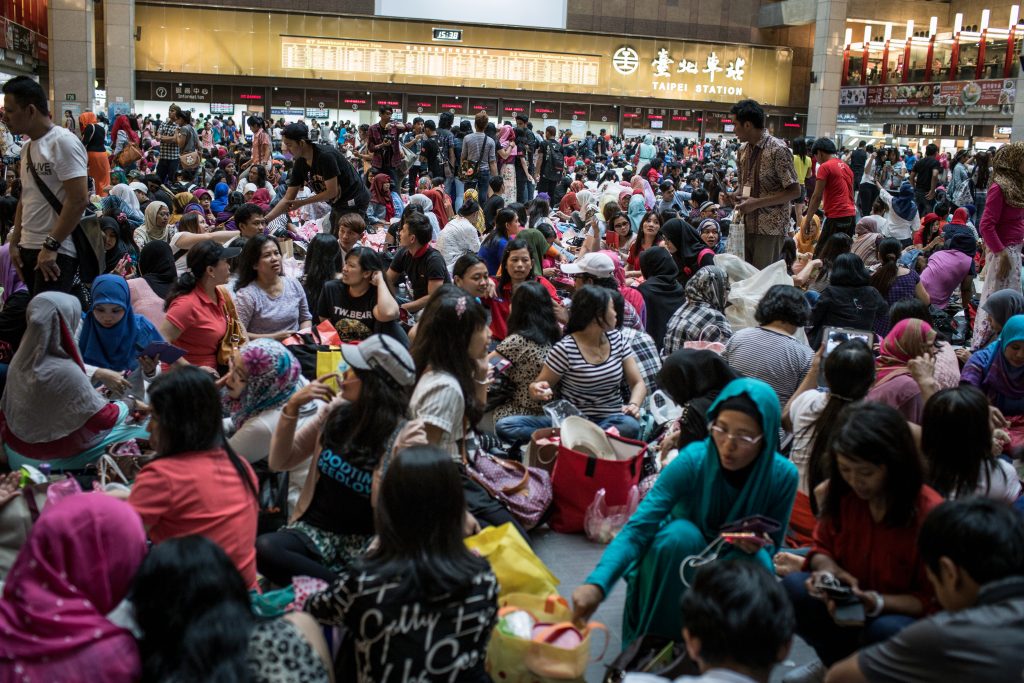 Thousands of Indonesian migrant workers gather at Taipei Main Station on Sunday, July 19, 2015, to celebrate Hari Rayi Aidilfitri, the Muslim festival marking the end of Ramadan. There are over 200,000 migrant workers from Indonesia living in Taiwan, making them the largest group of migrant workers on the island. Photograph by Paul Ratje

This stark physical segregation—reminiscent of images from the American civil rights era, if also present in pockets of American neighborhoods today—reminded me of familiar scenes in other parts of East Asia and the Middle East, including Dubai, Singapore, and Malaysia, where such a de facto caste system is common practice. “Niche” jobs are allotted for members of certain ethnicities, such as Nepalese security guards, Filipino nannies, or Indonesian maids. This segregation of ethnic workers is no less evident in Hong Kong, where Filipinos serve as the majority workforce of maids and babysitters, while Southeast Asian men are a familiar sight as construction workers. Sales and customer service positions are reserved for lighter-skinned Chinese.

Indeed, the scene at Taipei Station is similar to those infamous “Sunday picnics” in the Central district of Hong Kong, where the city’s domestic workers convene in open spaces on their only day off. A friend of mine, a Jesuit priest, spends his Sunday mornings in Central, attending to the young women who for one day a week can exercise self-care. Over potluck lunches, they exchange stories of demanding employers, and of the apathy they feel toward the children for whom they babysit, cook, and clean. These sentiments are expressed in Villette by Lucy Snowe, an isolated Englishwoman teaching in Brussels. They can also be read in Brontë’s manuscripts and journals describing her alienation at Roe Head, and in her letter to Ellen Nussey, recently on exhibit at the Morgan Library.

In my literature discussions with students around Taiwan, I questioned them about the experience of reading Brontë novels and modern Asian American adaptations in a foreign language. We zeroed in on two opposing threads of experience found in those works: that of the familiar made strange, and that of the foreign made to feel “like home.” They identified with the plights experienced by the Brontës’ protagonists—like Jane Eyre, Heathcliff, or Lucy Snowe—but even more closely with the defamiliarization felt by the analogous characters of Jane Re, Taro Azuma, or Yoko Utagawa, and the desolating heimweh those young heroes suffer. As readers, the students felt at home with these characters, but often like foreigners traveling precariously through a text not written in their home language. As I left Taipei station that April day, I looked back and took in this scene of migrant dislocation with a keen sense of pain and appreciation. For the domestic workers in Taipei and Hong Kong—on Sundays only—the compassion and emotional care they show for one another is not construed as labor, but a non-transactional form of nurturing, what Schaffer would classify as “authentic, genuine care.”

From the university to the train station, spending a Brontë bicentenary in Asia was a reminder of the alienation, the homesickness, and the burden of emotional labor so many have experienced across time—but also of how travel and literature can help to cultivate our empathy and understanding of these enduring experiences, whether in Yorkshire or Taipei.