Wait Cursor
A girl, bundled against the cold, holds up her hand as though requesting pause or distance—freeze, stop, stay back. Perfectly centered in the space of her bright palm is a Mac loading wheel frozen in ... 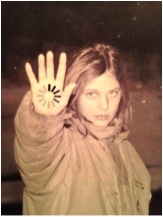 A girl, bundled against the cold, holds up her hand as though requesting pause or distance—freeze, stop, stay back. Perfectly centered in the space of her bright palm is a Mac loading wheel frozen in mid-spin, its moon-burst rays making a value scale of the photograph’s various grays. Roland Barthes had a phrase—“prophecy in reverse”—for the shock of the photograph that comes too close to the present, that pierces us with its hallucinatory clearness. Maybe it’s the palmistry, the whites beneath her irises, but there’s something oracular here, as though the hypnotic wait-cursor might really be our wheel of fortune.

A killer cover can make me suspicious; often it tries to synthesize hollowly, or to hide a book’s lusterless insides. But this one binds beautifully to the project of its contents. Eric Linsker’s collection La Far, winner of the Iowa Poetry Prize, is now available from the University of Iowa Press. And one of its aims, I think, is to be available—a word Linsker likes—that is, to be open, and to catch the world in its openness. In “Irreversibility Ode”:

These are lyric poems, but Linsker’s “I” is a tactical disguise: a way of glimpsing the world when its back is turned, offering an optics of anti-observation:

What should poetry capture? How? If it’s Matthew Arnold’s “movement of mind,” how to capture the limits of the mind that’s moving? Distortion, enjambment, erasure—all are clearly part of Linsker’s compositional technique, which can create a shutter speed–like rhythm. At the same time, these are lapping, recursive poems. Like its omnipresent waves, La Far’s lines “decay into their growth” (“Common Day”).

When the poems return, as they often do, to the shoreline, I hear Linsker questioning the new meanings of distance in our age, and limning frontier space with cyber-inflections that remind me of Thom Yorke’s voice: his detached, somatic pleas for submersion in an anonymous, techno-social realm, where compassion follows the rhythms of information feed, the surf-like lurches of image freeze/unfreeze. The shore is a space of pixellation and glinting. Sand, behaving like sea and land, has a certain “availability” to poetry that would slip into digital textures; it “covers more—is washed more away” (“Hope Mountain”).

“Coverage” in La Far often signals a shared space submerged in oblivion: “this is one way of saying goodbye together / humans covered in water standing // in cinnabar on video saying yes” (“Pyramid Song”). When a flurry of short verses in the book’s very center reckons with the possibilities of media “coverage” more literally, this idea of a fatally covered commons will be on your mind. The “Dongzhou Sea” series draws fragments from international reporting on the 2005 Dongzhou massacre, where Chinese police opened fire on those protesting against the construction of a power plant in their village.

I can’t speak. I hope you understand.
For most of the year visibility over
We apologize to our ancestors!

They don’t want me to know, but I know
It’s useless that I know, but I still know
Though I pretend not to know, I know

As in “Irreversibility Ode,” the verse keeps returning to the “break” of the event. But here the fragments surface out of a suppression that is social as well as personal; the Chinese media blocked the story.

I suspect that when Linsker chose his epigraph from King Lear, he wanted “Monsieur La Far” to resonate with the disorienting distances of that play, where the faithful abscond or expatriate, whereas treachery often seems, like the horror-movie phone call, to be coming from inside the house. What new distances, he seems to ask, open when we’re connected in this way, when “we’re so social”? And what new kinds of verse?

One of the most vise-like poems I have ever encountered is “We’re So Social Now”, which begins with glitching eagerness, “SO SOCIAL / SO SOCIAL,” and proceeds through a kind of web-glossolalia, textual streams that become familiar units through the simple device of repetition. A quick sample:

You need to read the whole poem to understand how its grip works: how the iterations both lengthen and tighten, forcing you to find their edges in a sea of “Dell drool.” In six pages of glitch, you will construct a kind of social coherence; you’ll “gang-narrate,” as Linsker might say. While the poem shows sense-making at its most basic, it also, (and I think this is the real achievement), enacts the web’s peculiar sociality of nearing farness and far nearness. The poem has something of the cover photograph’s uncanniness, its sense of wireless intimacy mingled with the impersonal solipsism of the screen-grab. To look is to flatten one world against another. And against her gesture—keep your distance—I keep looking. 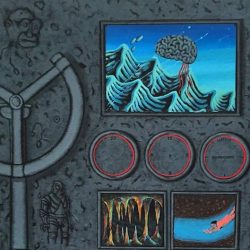