When Books Had Chains, and Pages Were Illuminated
In a side room of the Boston College site of the three-part exhibition Beyond Words: Illuminated Manuscripts in Boston Collections ... 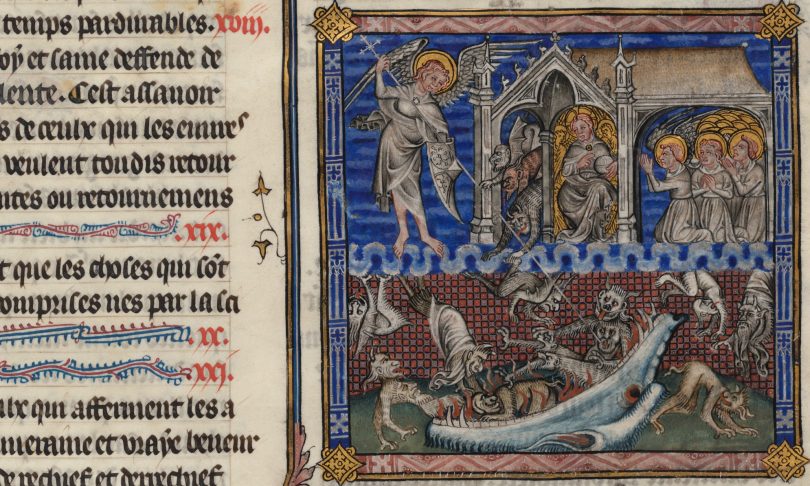 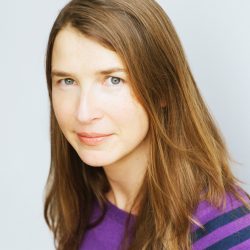 In a side room of the Boston College site of the three-part exhibition Beyond Words: Illuminated Manuscripts in Boston Collections (at the McMullen Museum of Art, Isabella Stewart Gardner Museum, and Houghton Library), a video displays the laborious process of transforming animal skin into parchment. Sparing us the slaughter of the animal (calf, sheep, or goat), the screen shows only the stretching and drying of the skin, the rubbing and powdering of the surface so that it will take the ink.

I’m not about to suggest that the new generation of hipster hunters expand their preferences from “farm-to-table” cuisine to “barnyard-to-bookstore” texts. But at a time when the president can set the presses running with a single tap on his smart phone, we might pause to reflect on the time and labor once required to make a book.

In the eras considered in Beyond Words (the 9th to the 17th centuries), disseminating books was no easier than producing them. If you, a wealthy and educated patron, commissioned an illuminated edition of Virgil’s Aeneid, would anyone else get to share the pleasure of reading it? Renaissance letters attest to the way precious manuscripts were passed among close circles of friends, making them available for reading or copying. For less well-connected readers, there were early incarnations of the non-lending library. These libraries took no chances with the reading public: as the Houghton portion of the exhibit shows, books were secured in place by heavy metal chains, some of which are still attached. 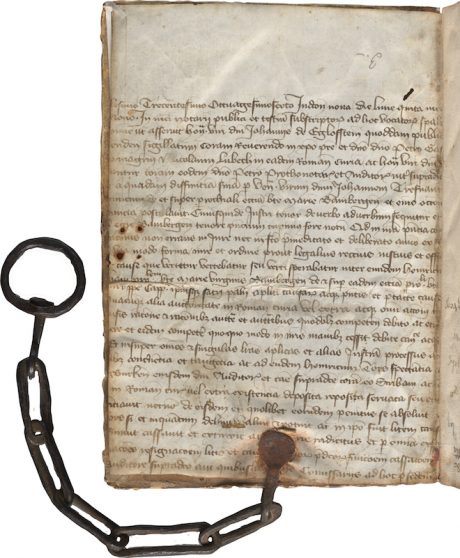 Later readers have assumed that the difficulty of creating and sharing books stifled originality. After all, illuminated texts were collective enterprises, and the most popular texts were copies of earlier books (new editions of the classics), prayer books, Bibles, and so forth. Yet even texts with conventional, repetitive religious subject matter, such as Books of Hours and collections of psalms, contained countless pictorial inventions, as did secular treatises on subjects ranging from the courtly art of jousting to the creatures of the sea. While many of these texts lack bylines, all bear the marks of creative minds and hands.

In fact, the literal singularity of book production allowed a licentiousness that would shut down with print. The printing press ratcheted up the stakes of censorship: unorthodox ideas themselves didn’t pose a threat, but their dissemination did. In one of the most celebrated scandals of the 16th century, explicit images depicting sexual positions (unambiguously called I Modi, or “the positions”) circulated in the Vatican. The artist, Giulio Romano, was lauded, his career continued to ascend, and his works inspired humanist Pietro Aretino to compose a series of extremely crude poems to accompany a second edition. The printmaker, Marcantonio Raimondi, landed in jail.

When exactly did copying come to be seen as antithetical to originality?

The number of authors and the range of their subjects expanded substantially following the invention of the printing press around 1440. The printing press also created a demand for paper, which soon made it far cheaper and more widely available than parchment had ever been. Artists now had a lightweight, portable surface on which they could sketch their ideas, putting them through multiple permutations before arriving at their final form. The fecundity we see in Leonardo da Vinci or Michelangelo depended on this practice of drawing.

The cult of genius and the fetish of the handmade mark grew out of the era when copying became possible. Over the course of his lifetime, Michelangelo’s drawings took on such an extraordinary value that leading authors, other artists, and patrons wrote to him begging for “any work from his hand.” This subjugation of subject to authorship—what matters is not what is drawn but who drew it—marks an extraordinary inversion of the order of things that had prevailed just a century earlier. Michelangelo toyed with the boundaries of originality and imitation, not only copying antique sculptures to demonstrate his mastery, but even passing them off as the real thing. 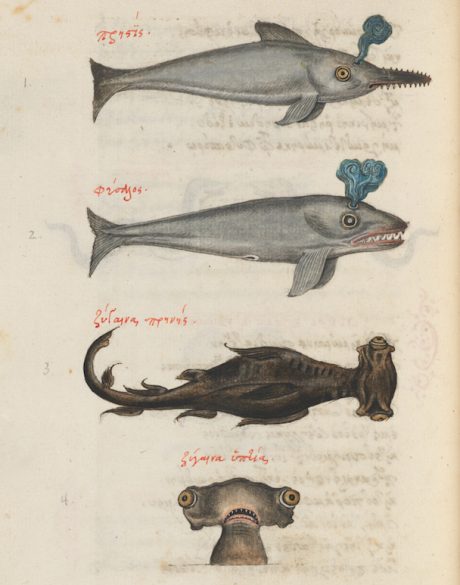 Today, we tend to view copying in an exclusively negative light: at best, a mechanical exercise; at worst, a crime. Renaissance artists such as Michelangelo saw copying as a step on the road to originality. How else could an artist or author acquire mastery, if not by learning from the finest exemplars of old? The only matter of debate concerned how to imitate: whether to copy one source or many, and to what degree.

When exactly did copying come to be seen as antithetical to originality? Much of the blame can be placed at the feet of the modernists, to whom we owe the idea that individual creative genius springs from nothing but itself. The consequences of this view have been dire, because as soon as the practice of imitation dies, so does the relevance of the past, or the need for artists or writers to actually know anything about what came before. Our own cult of the individual has taken a grotesquely commercial turn, in which people are brands and authors are “content creators.” There’s something to be said for a time in which authors were unknown, but books were precious. 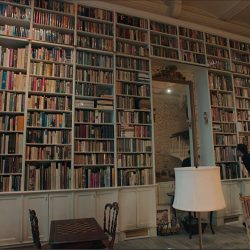 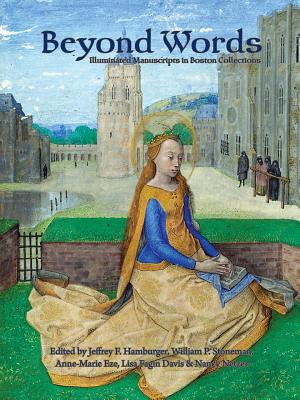