11 TV Shows Professors Are Watching This Summer
The academic year has wound to a definitive close, the Handmaid’s Tale hype has died down, and those of the professorial persuasion now have less than two blissful months remaining ... 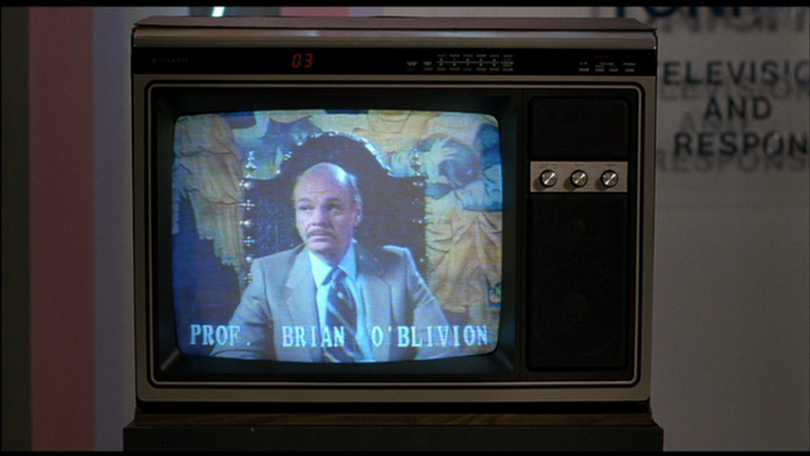 The academic year has wound to a definitive close, the Handmaid’s Tale hype has died down, and those of the professorial persuasion now have less than two blissful months remaining in which to finish endless book chapters, review countless articles and tenure files, and write multiple syllabi for next year’s courses. Or, in the words of our friends and family members, “go on vacation.” Still, for many faculty members, summer is prime time for some well-earned binge-watching. What does the professoriate watch off the clock, in their precious moments of respite? I asked colleagues from a variety of disciplines to tell me about the shows—Euro procedurals, quirky and queer comedies, reality franchises, science fiction trips, sitcoms, women’s dramedies—in their queues this summer.

In an effort to escape the dual perils of Trumpistan (my current home) and Hindustan (my forever home), where Orange and Saffron agents have made distraction impossible to find, I decided to voyage out to exotic lands in search of benign, soothing entertainment. What I discovered was this Swedish series, adapted from the blockbuster novels of Camilla Läckberg. Set in the bucolic fishing village of Fjällbacka, populated by very white people with very white problems (real estate, hunting, antique shopping), the series revolves around the sleuthing skills of a successful crime novelist, Erica Falck (Claudia Galli of NBC’s Welcome to Sweden). Murders occur on an alarmingly regular basis, revealing the twisted secrets that lurk beneath that oh-so-serene small-town surface. 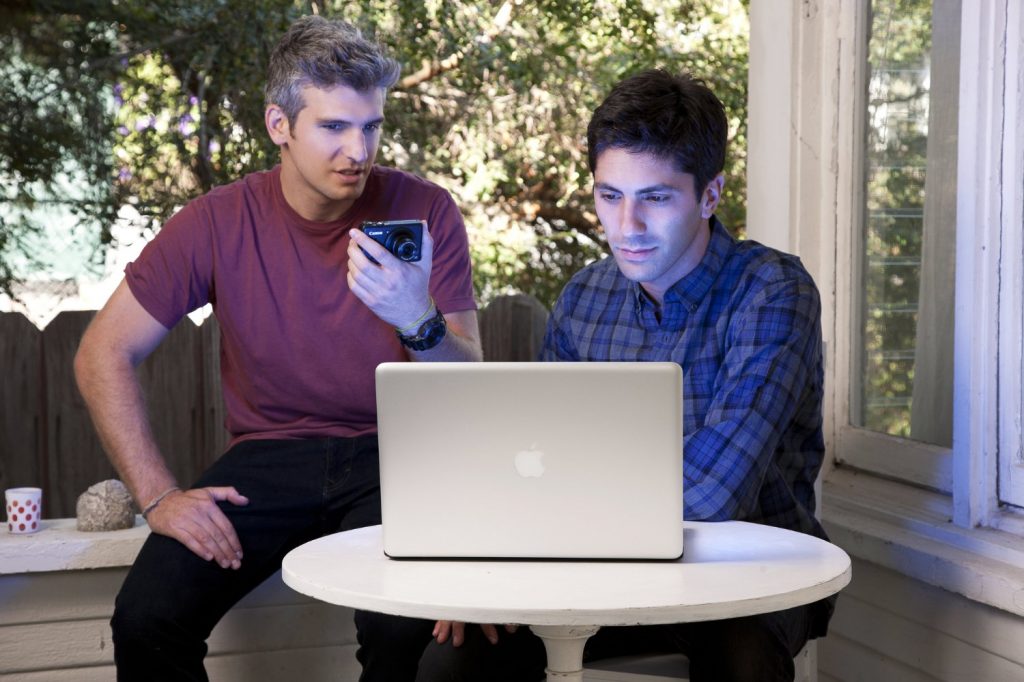 The cohosts of this show solve the following problem over and over again: “I’m in love with X, whom I met online. We have never met in person. Is X really who they say they are?” Each episode’s story is as creepy as it is compelling. Catfish is one of the smartest shows out there when it comes to desire, loneliness, intimacy, love, and sexuality. Quite a few plotlines center on LGBTQ attachments, and pretty intense forms of shame are addressed head-on. These are tales of the anxious and the abandoned. The conditions of possibility for each scenario are tech-based: apps, social-media platforms like Facebook and Instagram, texting, and—a real throwback—phone calls. The show never fails to engage me. 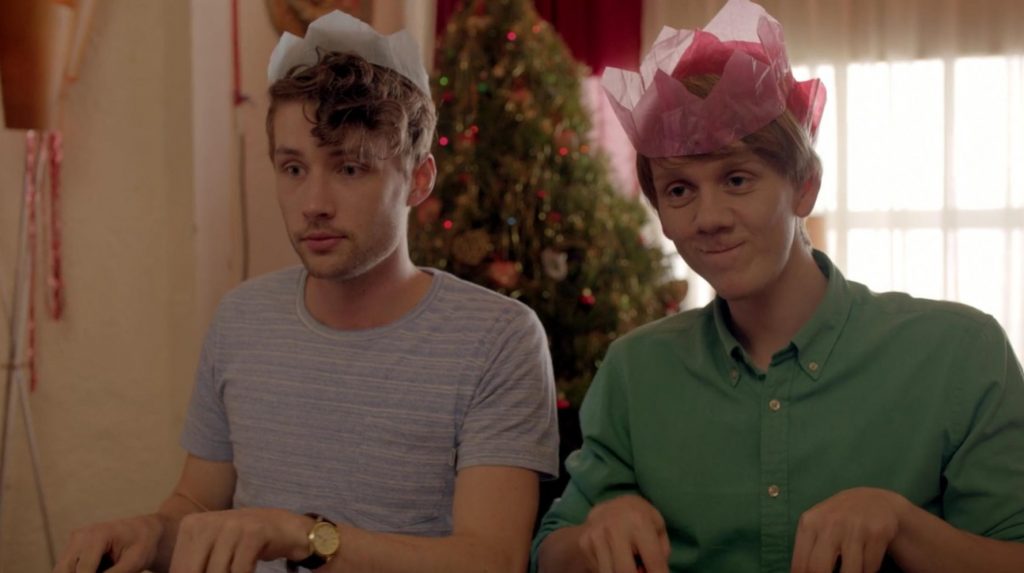 This four-season Australian show, written by and starring comedian Josh Thomas, belongs to the millennial genre of Girls, The Mindy Project (Kaling is technically not a millennial, but she might as well be), and Master of None. But it’s better because of its central queer star (though the show is far less multi-culti than Master) and its reality principle. Also, unlike the characters in Transparent, who are dysfunctional and hateful, the characters on this show are dysfunctional and likable—if not downright lovable. Finally, the series, alternately hilarious and intensely sad, ended when it needed to end. 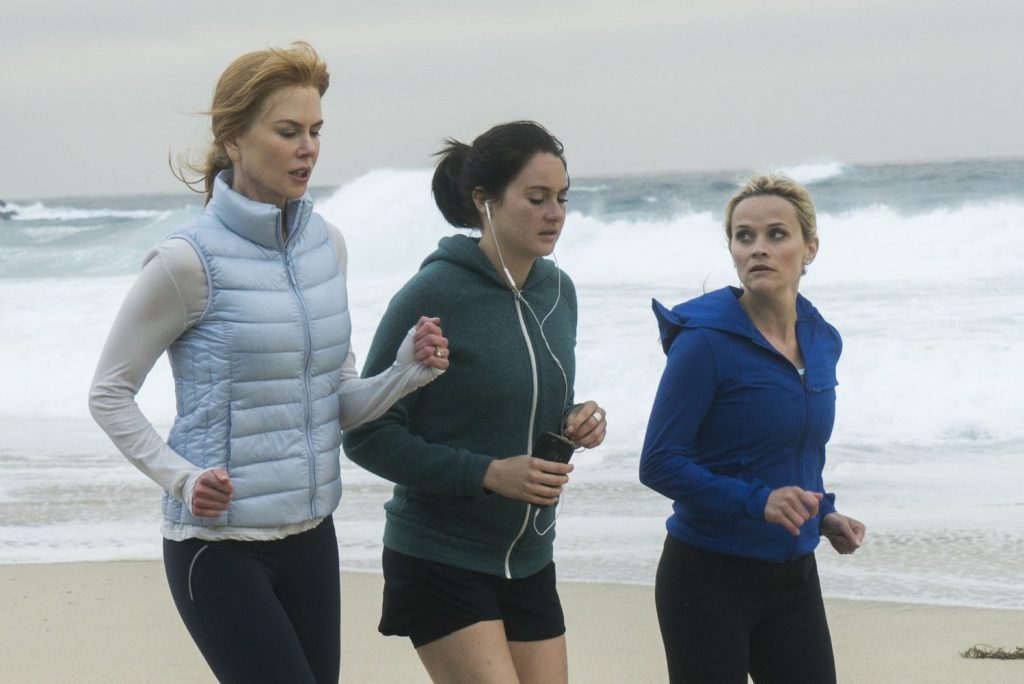 I didn’t want to see Big Little Lies. Not even after a close friend promised I would love it. A dark comedy about three moms in California? I detest comedies, and one about rich, heterosexual white women seemed particularly unappealing. So when I finally surrendered to an episode I was positively surprised: yes, everyone was very white, very rich, and very heterosexual. But the acting (especially that of Reese Witherspoon and Nicole Kidman) was superb, and I found myself gripped. It was only after the third or fourth episode that I realized just how brilliant the show was. Part comedy, part drama, part thriller, Big Little Lies refuses a clear genre classification. From within this undefined space, the series delivers a profound, unsettling, and uncompromising critique of domestic violence as it explores the intricate relationship between sexuality, violence, power, shame, and denial. I dearly hope that the rumors of a second season are true. 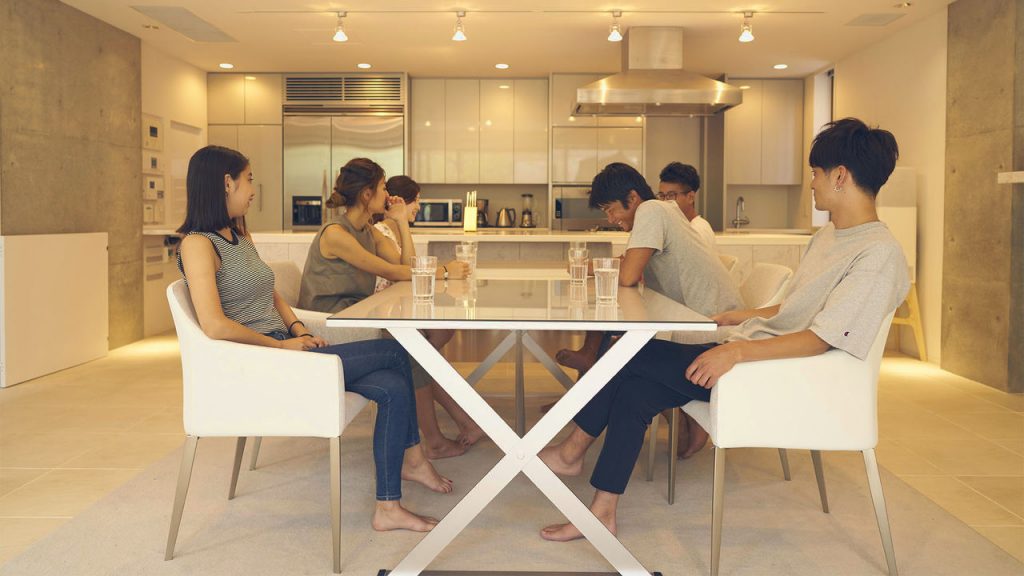 Terrace House: Boys and Girls in the City, Fuji Television/Netflix, 2015–16

Netflix’s expansion into the Japanese market has brought a collection of refreshing content to US shores. In the Terrace House reality franchise, six strangers are picked to live in a house together—but there are no contests and no bloodshed, and no one’s booted out. Instead, the housemates help each other achieve their goals and dreams. There are intrigues and hints of drama, but they’re whisper-subtle. No malicious debriefs, no visible signs of production, just soothing whites and neutrals. The cameras are low, still, and patient. A panel of well-dressed tarentos (celebrities) watch along with us, inserting mirthful commentary. Terrace House is an oasis: a glimpse of the reality TV that might have been. 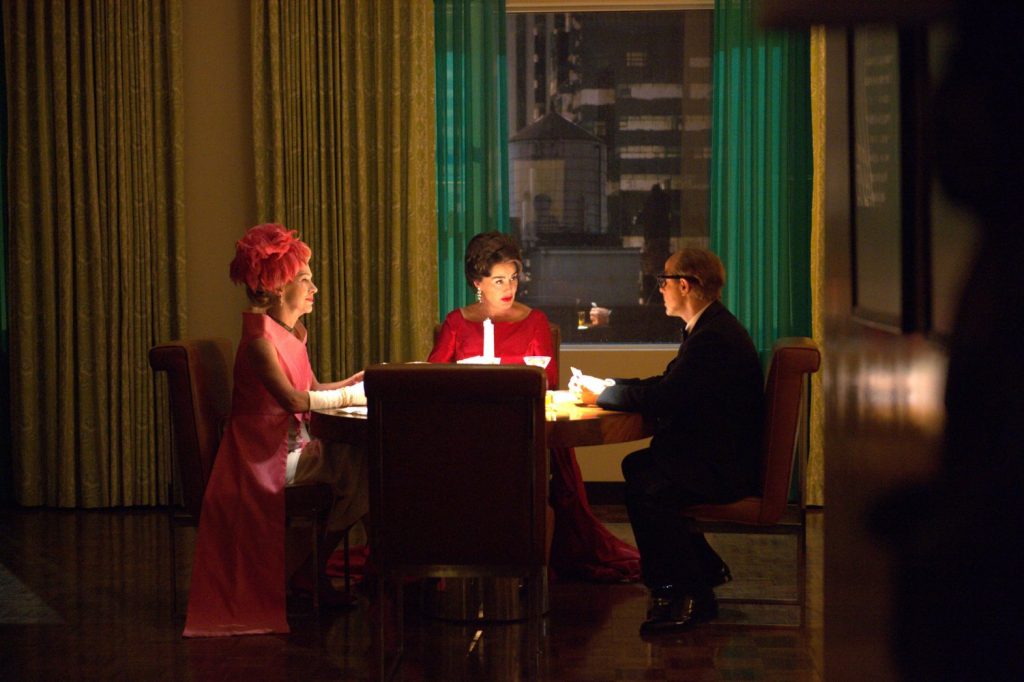 Jessica Lange as Joan Crawford in Feud: Bette and Joan

The poster for Feud: Bette and Joan shows Bette Davis and Joan Crawford behind bars. I saw that poster a lot this past spring, and each time I seethed. What was this, more “lock her up?” Call it Stockholm syndrome, but I decided to try the show anyway, and I’m glad I did. Philosopher Georg Simmel associated the actor’s art with autonomy, arguing that actors do not imitate other actors’ performances. Except when they do. Feud’s camp aesthetic demands that Susan Sarandon and Jessica Lange reproduce Bette and Joan as precisely as possible. But unlike the characters they play, Sarandon and Lange find freedom within constraint. And that’s another definition of art. 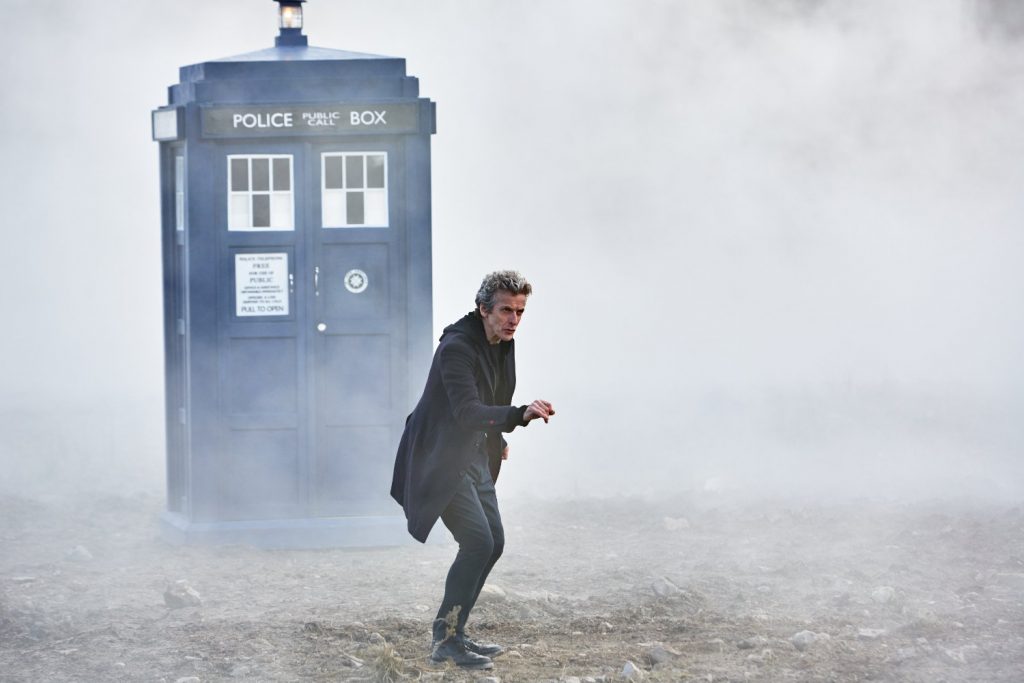 Peter Capaldi as The Doctor in Doctor Who

One way to define my life would be to say I’ve spent it watching Doctor Who. It began in England just after I was born and it’s still on. Like all fans, I watch it for the “good ones,” when it plays with time, imagines the invisible, and envisions other ways to be. Unfortunately, being the kind of person that I am, I have stupidly reflected on what Doctor Who is actually about. Which is decolonization and Britain’s loss of imperial power. People often discuss why the Doctor is always white and male. But what if they could be, say, French? Imagine: le docteur Qui! Now that would be a good one. 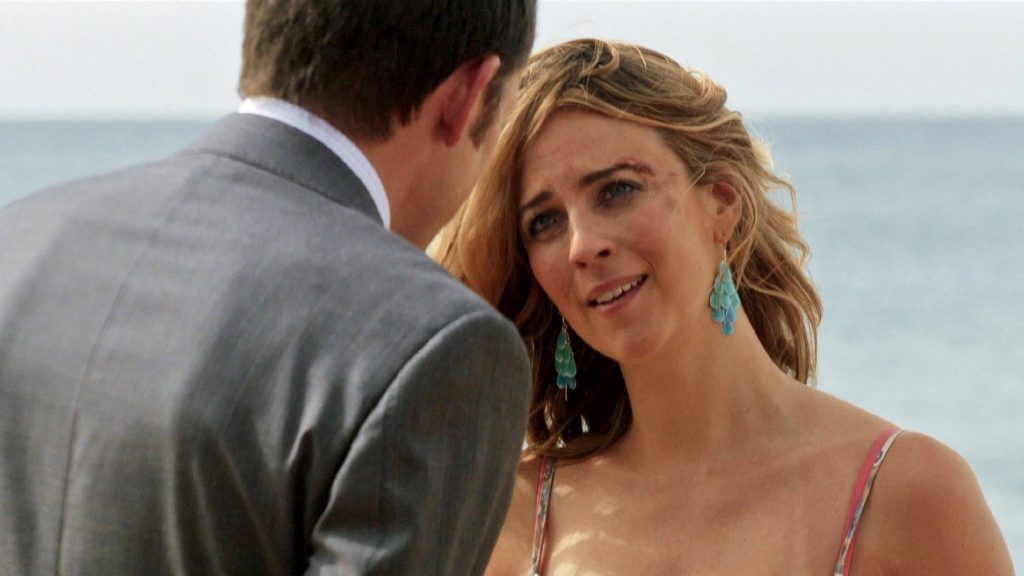 Miranda Raison as Megan Talbot in Death in Paradise

The premise is simple: awkward British detective works with a group of local officers to solve murders on a (fictional) Caribbean island. Despite the white-savior setup, the scenery, the frequent nods to the complicated histories of Caribbean colonialism, and the breadth of reasons for being on the island—weddings, reality shows, carnival, historical reenactments, scientific inquiry, and so on—present a more fleshed-out landscape of capital and the movement of people than one usually sees of the Caribbean. There’s also the immense satisfaction of seeing a murder solved through logic over the course of an hour—a breath of fresh air in these confusing times. 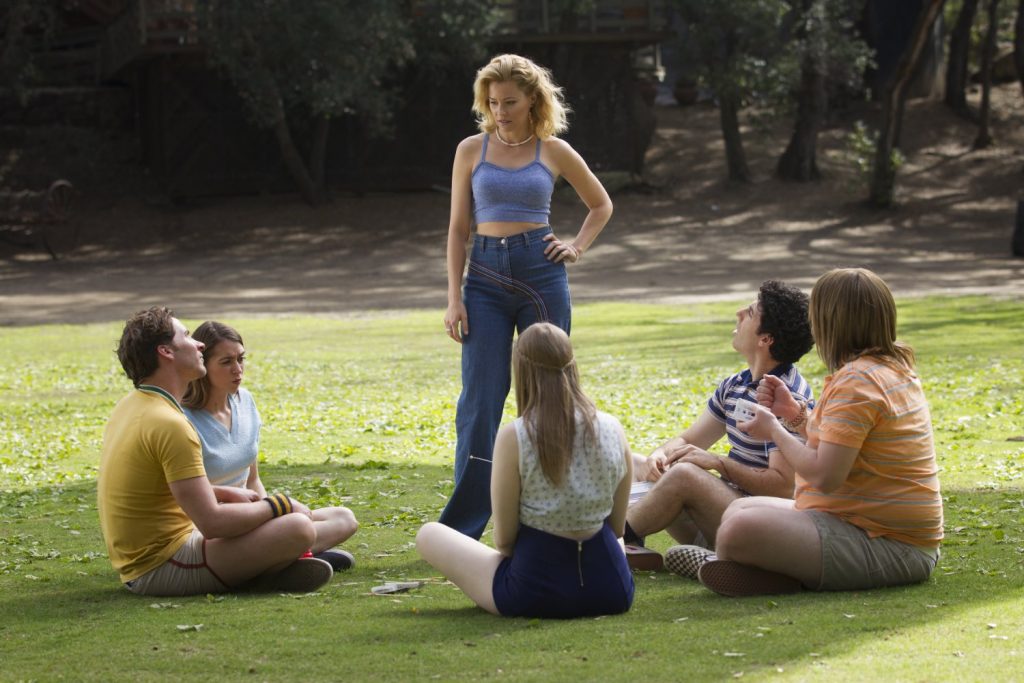 In preparation for Netflix’s release of the “10 years later” reunion series, I’ve been binging this surreal ode to the 1970s and ’80s summer camp film, which acts as a prequel to the 2001 film Wet Hot American Summer. Growing up as a refugee reading books like Sal Fisher at Girl Scout Camp (where the titular Sally gets her first pixie cut and helps a femme learn to enjoy hiking, or cooking in a hole, or something) and later watching films like Little Darlings (starring tomboys Kristy McNichol and Tatum O’Neal), I found these American teen rites of passage fascinatingly alien—and lesbionic. There’s not much that is dyke-y about Wet Hot American Summer if you don’t count my extradiegetic ’90s crush on Janeane Garofalo, but the heightened absurdity of the usual camp themes—crushes, crafts, camaraderie, and adult portrayals of 16-year-olds—is just stupid enough to make up for it. 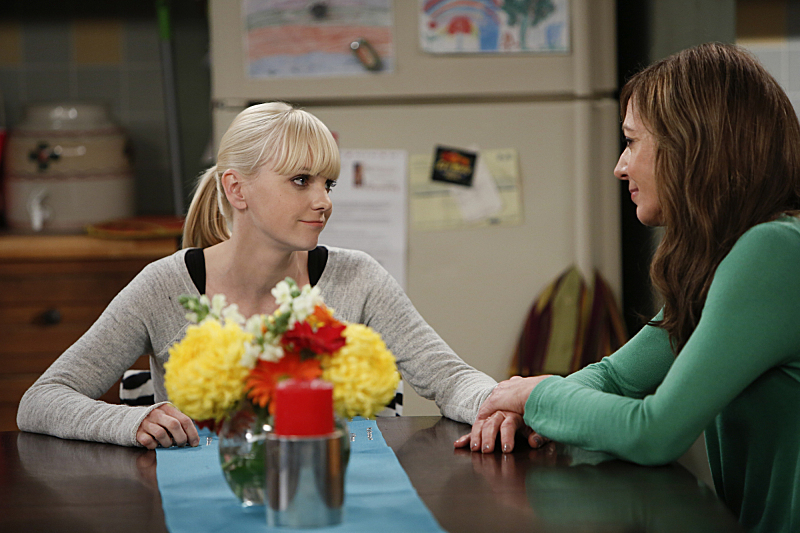 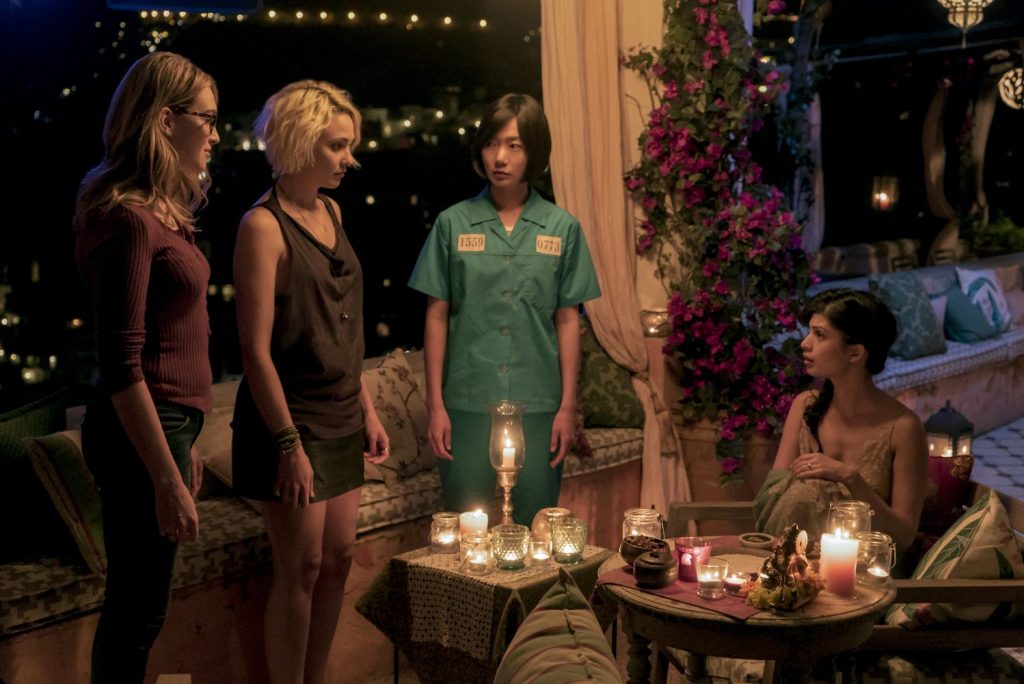 From left to right: Jamie Clayton as Nomi, Tuppence Middleton as Riley, Bae Doona as Sun, and Tina Desai as Kala in Sense8

Despite its wooden performances and bewildering plot, which was either too deep or all stardust, I paid to watch Jupiter Ascending twice. Not just for Channing Tatum as a sleeveless Vulcan/chinchilla, but because my torch burns for the Wachowskis’ utopian vision. Queer hope led me to Sense8, but not without attendant wariness. Would the sisters’ cyborgian gender agenda finally transcend Hollywood’s myth of the indispensable white lead, or overcome their notion of racial liberation as a multi-culti rainbow parfait? But episode after episode, the sobered Icelandic pixie chick, her sensitive cop-bro boyfriend (the only two in their cluster allowed to meet and fuck in person), and the white (trans)lady superhacker direct a flock of remote, brown, closeted Homo sensoriums trapped in the exact social circumstances stereotypically assigned to their races: hyper-homophobic Latins, Hollywood-Fu Asians, reluctantly betrothed Indians, Africans besieged by fellow Africans. The queer horizon keeps retreating, but I keep believing (and hate-watching).