A Beacon of Futurity and a Balm of Security
Guadalupe Maravilla makes multimedia art to grapple with his “traumatic experiences” as a unaccompanied child and undocumented migrant. 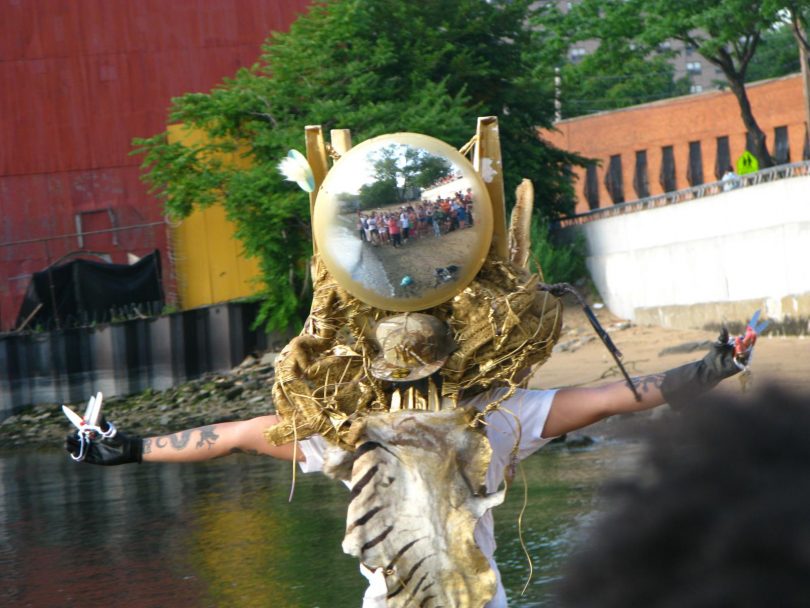 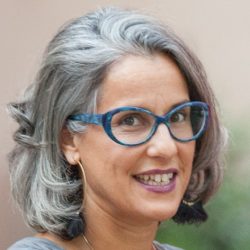 The future arrived in the spring of 2021. Around the time that the COVID-19 vaccine became more widely available, and coronavirus case rates started to drop in the United States, Americans began talking with more certainty about the future. In my home state of California, the future had a precise arrival date: June 15. California governor Gavin Newsom announced that, on that date, pandemic-induced restrictions would be eased, and the state’s economy would fully reopen. After being trapped in the loop of the present, of one day blurring into the next, some of us, myself included, began thinking about the future: about what we’d do once we could leave our homes and gather in person with friends and family again, about what we’d do differently and better in a post-pandemic world. Cautiously, we shifted from the habitual past, present progressive, and conditional tenses—from what we used to do, were doing, and might do—to the future tense. In doing so, we envisioned and enacted futurity, what C. L. R James described in 1947 as “the future that is in the present.”

As James’s work tells us, the future looks different, depending on where one is situated in society. For the people overlooked within, or erased from, the past, present, and future, such as women, queers, people of color, people with disabilities, and undocumented migrants, or for those living with enforced presentism (the inability to plan due to a lack of certainty and stability), futurity can be radical. It can point to “a refunctioned notion of utopia in the service of subaltern politics” and an “open-ended desire for a world beyond the limits of the present.”1 Futurity is also essential during a real crisis, like a pandemic. Multimedia artist Guadalupe Maravilla drives this last point home via his Salvifuturist installations and performances.

Formerly known as Irvin Morazán, Maravilla was born in 1976 in San Salvador. At the age of eight, he fled the civil war in El Salvador and migrated to the United States as part of what’s now referred to as “the first wave” of unaccompanied children to travel from Central America to the US-Mexico border. With the assistance of a coyote, he crossed the Rio Grande and made his way to New York City, where he grew up undocumented. At 26, he naturalized as a US citizen. Ten years later, he was diagnosed with colon cancer. He sought remedies from western medicine, “shamans, Brujox, [and] curanderos” and was drawn to sound therapy in particular. “Our bodies are over sixty percent water,” he explained in a January 2021 interview. “And in the water, we carry anxieties … stress … trauma. In some cases, we carry … illnesses. Or sometimes, these untreated traumas can manifest in an illness … The sound vibration shakes up the water in your body.”

Many of Maravilla’s elaborate mixed-media sculptures, immersive installations, and collaborative, ritualistic performances grapple with his “traumatic experiences” as a former unaccompanied child and undocumented migrant, refugee, and cancer survivor. In addition to being part of his self-healing process, his works are his offerings “for self-healing to the immigrant community and beyond.”

For example, his sound baths—performances/rituals with gongs—seek to restore participants’ well-being. On July 7, 2020, in the midst of the pandemic, he performed a sound bath in Brooklyn for undocumented migrants who’d been released from detention. Not quite a year later, he was offering sound baths for undocumented migrants, people affected by cancer, and the general public at Planeta Abuelx. Spanning 60 feet in Socrates Sculpture Park in Queens, this exhibition consists of two towering cast-aluminum-and-steel sculptures; two massive gongs; a ring of medicinal plants, including corn, squash, and beans; a ground drawing made of water-based paint; an aluminum firepit; and a retablo (devotional painting) the size of a billboard. Images of his sound baths show participants relaxing on yoga mats, beach towels, and picnic blankets. They stand in stark contrast to those of migrant children shivering in mylar blankets in hieleras.

Maravilla and Xu’s sound bath was a balm of security and a beacon of futurity. It was also a reminder of the indispensable role migrants and artists play in society.

Maravilla’s sound baths stem from his autobiographical trilogy, a combination of musical performance, dance, and sculptures. Using science-fiction tropes and reenacting moments from his own life, the trilogy invents what he calls “new mythologies” and “a new visual language for border crossing stories.” The first installment, The OG of Undocumented Children, performed at the Whitney Museum in 2018, recounted the story of his journey to and arrival in the United States as a child. The second installment, Walk on Water, which I discuss below, took place on July 21, 2019, at the Queens Museum as part of the exhibition Mundos Alternos: Art and Science Fiction in the Americas. Fantastic, mixed-media, gong-bearing sculptures comprise the third installment, Disease Thrower. These totemic sculptures, two of which are part of Planeta Abuelx, link the trauma of his border crossing to his cancer and highlight “the ways he overcame the disease.”

Walk on Water was set in the Panorama of the City of New York, a 9,335-square-foot architectural model of New York City that was created for the 1964 World’s Fair. Accompanied by the “songstress,” La Momia (Sam Xu), a “team of [gong-playing] healers,” and two “futuristic border crossing Coyotes” with exposed torso organs (Nima Jeizan and Maxwell Runko), Maravilla invoked his own traversing of the Rio Grande at age eight as he trod across the Panorama’s waterways. The green, inflatable suit he wore transformed him into the Alien Abductor—an enormous, otherworldly creature—and, at the same time, the Alien Abductor’s abductee. In the Alien Abductor’s arms, Maravilla’s own arms were extended outward. In addition to appearing small, vulnerable, and childlike, he resembled Christ on the cross. Connecting illness and illegality, “illEGAL” was written across the Alien Abductor’s back.

Like many of Maravilla’s other works, Walk on Water had a strong spiritual and therapeutic component. Its title alone evokes the story of Jesus’s miracle, and the gongs’ swirling, overlapping sounds were “intended to cleanse political phobias and blockages of New Yorkers” during the third year of the Trump administration.

What’s more, Walk on Water was an homage to migrant labor. With their hand-held vacuum cleaners and fluorescent-mop slippers, the coyotes cleansed the space of the Panorama. As the coyotes and Maravilla walked along the miniature replica of the East River, Jamaica Bay, and the Upper Bay, the gongs emitted vibrations that extended to the listeners. While the coyotes’ exposed intestines pointed to Maravilla’s colon cancer and corporality in general, Walk on Water likened the unaccompanied and undocumented child migrant to a miracle worker and transformed the migrant house cleaner and domestic worker into a powerful shaman. 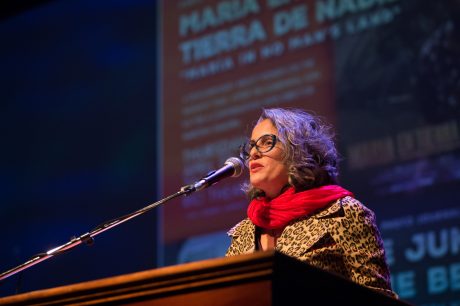 The pandemic has cast new light on the key and outsize roles that migrants, especially undocumented ones, play in our society. For example, on March 19, 2020, just eight days after the World Health Organization declared SARS-CoV-2 a pandemic, the US Department of Homeland Security, the agency charged with hunting down, rounding up, incarcerating, and deporting migrants, classified farmworkers as essential. In the US, it’s an open secret that many, if not most, farmworkers are undocumented.

Migration has long been cast as a national-security issue. Yet, the convergence of crises we’ve faced since March 2020—the abrupt and colossal loss of lives, jobs, routines, and contact—has prompted many to rethink security not so much in terms of sovereignty or defense, but as social or public goods, such as health care, housing, food, water, and education. Science-fiction writer Kim Stanley Robinson calls these social and public goods “the necessities for a good life” in his most recent novel, The Ministry for the Future. “Security is the feeling that results from being confident that you will have [the necessities for a good life] and your children will have them too,” he writes. “So it is a derivative effect. There can be enough security for all; but only if all have security.”2

On March 21, 2021, 11 days after receiving my first dosage of the COVID-19 vaccine, I attended a virtual sound bath with Maravilla and Xu. This one took place at PPOW., a gallery in Manhattan’s Chinatown exhibiting Maravilla’s mixed-media sculptures, Seven Ancestral Stomachs, and five of his Disease Throwers. Xu, a Chinese migrant, dedicated the sound bath to the Lenape, the Native people of Manhattan, and to Manhattan’s Chinatown, one of many neighborhoods in New York City to witness a spike in anti-Asian violence since 2020. Maravilla dedicated it to a “friend battling cancer.”3 From three thousand miles away, the two artists filled my headphones with wave after wave of sound as I lay on my bed.

I’m not spiritual or religious. Nor am I a migrant, or a cancer survivor. However, after a year of “pandemic grief,” during which my own mother was diagnosed with colon cancer, Maravilla and Xu’s sound bath was a balm of security and a beacon of futurity. It was also a reminder of the indispensable role migrants and artists play in society.

To bring the future into the present and to build a good life for all, even, and especially, as coronavirus case rates begin to climb again, we need not only health care (in particular, vaccines), housing, food, water, and education, but new stories and images. In short, we need art, too. As we emerge from the pandemic and rethink crisis, borders, migration, citizenship, and security, we must look not only to lawyers, lawmakers, pundits, and politicians to guide us but to artists as well, especially migrant artists. Like poetry, as Audre Lorde reminded us many years ago, art “is not a luxury. It is a vital necessity of our existence.”

This article was commissioned by Geraldo Cadava.

Featured image: A moment from one of Morazan’s earlier performances at Socrates Sculpture Park in Queens, New York (2011). Photograph by Sol Aramendi / Flickr