A Bus Ride in Old Mexico
This is the latest installment of El Mirador, an ongoing series curated by Francisco Cantú. Spanish for “the lookout point,” El Mirador collects original nonfiction, translation, and visual art on ... 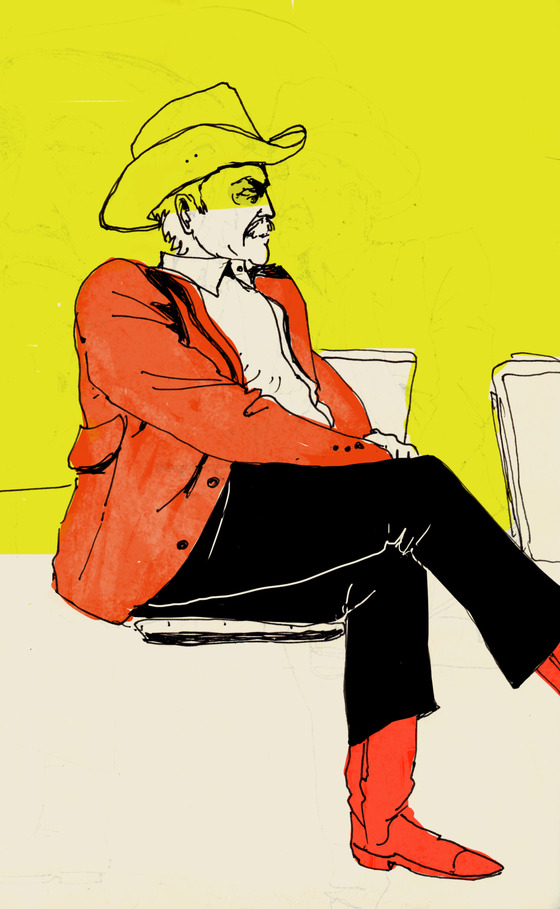 The bus from Hermosillo had rimmed out and leveled off on top of the Sierra Madre to begin its can-of-worms slide into Chihuahua when, from the pack between my legs, I took out my map. It covered Mexico from the border to Zacatecas and looking at it required me to stretch my right arm across the aisle, holding the gulf coast in my hand.

“You won’t get lost with a map like that,” said a voice from across the aisle and one row behind me.

I looked over my shoulder. The man had an easy smile to compliment his neat appearance. Clean gimme cap, sport shirt and jeans, well-cared-for shoes. Looked to be in his early 30s. I remember the bus picking him up from the side of the road not too long after I had seen a string of pack mules, outfitted in the same manner they were centuries ago, lined out on the Camino Real de Tierra Adentro, loaded with goods for trade in Santa Fe.

The ease with which the man engaged me in conversation, the only gringo on the bus, showed he’d been across the line. Perhaps he had been to places in my country I had not. My first day in Mexico, waiting for a bus in the Sonora border town of Agua Prieta, I passed the time with a local who reminisced about being a wetback in Crested Butte, Colorado, snowboarding on his days off. I’ve never snowboarded anywhere.

My neighbor, a second-generation rancher, tells me of the days when there were killings in front of the bar and fornicating behind it.

I don’t remember all the places my fellow passenger had been, but I do remember him saying he had lived in Denver and somewhere in Oregon for seven years before returning home on his own. He told me he was from Buenaventura and leaned forward to point to it on the map. I knew it, a logging town on the Chihuahua side of the Sierra Madres where I once hung out with a local vaquero who helped me gather steers off the Continental Divide in New Mexico’s Black Range mountains. He proved himself to be one good cowboy, but that was 40 years ago, before Mexicans grew their own dope for export. I suspected Buenaventura to be different now.

At some point the man began to speak English, and our conversation continued like a Cheech & Chong riff as we slipped mid-sentence in and out our respective foreign languages. He asked me where I was from and I told him just across the line from Agua Prieta, a walk of two nights and a day if you’re not packing more than twenty kilos of mota or trying to cross with your wife and kids.

I had long ago learned to expect the unexpected traveling in Mexico, but I was met with genuine surprise when the man looked at me and replied, “Rodeo?”

Rodeo, New Mexico—less than 10 miles south of my home in Arizona—still has a Post Office, but the one room schoolhouse is now someone’s residence, and the combination canned beans and Vienna sausage dry goods store/cafe no longer sells gasoline. The Rodeo Tavern has Guinness and Sam Adams on tap and state law requires anyone packing their hog leg to leave it in their pickup with the dog. My neighbor, a second-generation rancher, tells me of the days when there were killings in front of the bar and fornicating behind it. This was around 1910, when Arizona was dry and each Friday workers from the copper smelter in nearby Douglas would ride the company train to Rodeo, only to be gathered up and hauled back to the smelter by Sunday evening.

I told the man my home is indeed near Rodeo, in the same north/south desert valley through which travels a profitable quantity of smuggled drugs and people. I asked if this was his route into the US.

“No,” he said, “but my half-brother was a burrero for the narcos and often hiked his loads past Rodeo to the interstate.”

He had it right. Trains of two-legged drug mules regularly pass within sight of my place to continue on another thirty miles to reach I-10. There, they exchange their loads in the culverts along side the freeway for a renewed supply of food and water for their return trek back to Old Mexico. Often, drug mules break into homes along the back trails, mine included, and steal whatever might be of value and easily carried.

“My other brothers and I kept telling him to get out,” the man told me, “but he wouldn’t change his ways. A rival cartel caught him, killed him. Cut off his head.”

He said this in such an even way as to give me no reason to distrust him.

Our conversation shifted to local geography when I mentioned the Mennonites and their farms in the nearby countryside north of Cuauhtemoc. The man told me that another half-brother of his was a civil engineer who brokered land deals for them in Columbia, now that the country is more secure and the Mennonites have seemingly bought up all the land they can in Chihuahua.

“I have thirteen half-brothers,” he had me know.

“A la madre guey! A good Catholic family,” I acknowledged.

Thanks to NAFTA, Bud and Coors Lite now take up more shelf space than Mexican beer.

The man leaned toward my map again and pointed to a blank spot along the Sonora/Chihuahua state line, north of where we were on the road. For as long as I have had this map, with its torn and taped-over folds, this space has intrigued me. The map is detailed enough to show trails, but this part doesn’t even have the dashed lines to indicate mule or burro routes. B. Traven country.

“We don’t go there,” he says. “That’s where the Sonora cartel borders Chihuahua. Maybe you being gringo they wouldn’t bother, but they’d want to know what another Mexican like me would be doing there.”

I decided to seek B. Travin’s spirit elsewhere, but out of curiosity I asked, “What cartel is that?”

“You in the States just know the names of the big ones. We give the smaller ones numbers.”

He leaned forward into the middle of the aisle and speaks to the driver loud enough to be heard over the road noise. “Jefe, what cartel we in?”

The driver tilted back his shoulder and head keeping his eyes on the road, gracias a Dios, and replied, “El Dieciseis, all the way from Sonora up to the border at Ojinaga.”

It was as if they were talking about what time zone they were in.

“I work construction in Cuauhtemoc when there’s work,” the man told me, a little farther down the road, “but the cartel holds down the economy. The people with money don’t want to show it. If they do they get kidnapped.”

Pointing to the map on the Sonoran side, he said, “The price of gold has Canadian mining companies working the old mines and digging new ones all around here, and they don’t care what they do to the land. I have a friend who lives near a site and there’s a place we used to fish for trout where the river now runs green.”

I asked how the companies get hold of the land. He explained that the ejidos sell their mineral rights for nothing, but farther down the road he said, smiling, “I have a job with one of the Canadian companies in another three months, and they pay in dollars.”

My impromptu guide and traveling companion got off the bus at the last stop before Cuauhtemoc, to head north for Buenaventura. I remained in my seat as he walked past and with his easy smile stopped to shake my hand. He wished me well on my journey, and I replied in kind for his future job prospect that paid in dollars.

Sonora, Chihuahua, Coahuila, San Luis Potosi, Guanajuato, Aguascalientes, Zacatecas. It had been 28 years since I last tramped around Mexico. I wanted to see for myself how the country had changed, aside from all the bad news that reached El Norte. I noticed cell phones in most everyone’s hands and few watches on their wrists. Smooth, wide toll roads with the same conveniently placed amenities expected in the US had replaced the shoulderless one-and-a-half lane roads of earlier days, and far fewer cows and horses roamed the rural routes. Cyber cafes were in most every town. Thanks to NAFTA, Bud and Coors Lite now take up more refrigerated shelf space in the 24-hour Circle K-cloned convenience stores than Mexican beer. Though I prefer Mexican beer, I don’t complain. In small towns, with just one road in and out, there may still be two or three stores selling Pacifico or Negra Modelo. Their appeal is the good-enough coffee in the mornings and the allowance, at any time of day, for a customer to buy just one can or bottle snapped from a six pack without being looked at like a bum. The signs on cantina and pool hall doors that once said “No Women Or Minors Allowed” now proclaim the establishments to be smoke free.

But Mexican character has not changed.

In Mexican cabs, I sit up front for easier conversation with the driver. During a cab ride in Chihuahua City I asked the cabbie if he was from Chihuahua. “Yes,” he replied. “Have you been to the other side?” I asked.

“Yea, but I left because it was too hot. The Texas oil fields are a lot better. $25 an hour and just four hours away.”

Then, as if staring down someone hard through the windshield, as if to challenge five hundred years of his country’s history with the same grito that has for centuries exemplified Mexico’s fatalistic perseverance, he spit out the following words:

“If I want to work myself dead in the heat I’ll do it here in Chihuahua.”

After a nomadic childhood spent doodling, eating, sleeping, and growing, Michael Hirshon ended up as an illustrator. He holds an MFA in Illustration as Visual Essay from the School of Visual Arts. His work has been recognized by the Society of Illustrators, 3×3, American Illustration, Creative Quarterly, CMYK, Gestalten, and the AIGA.