A Godlike Science
Is there something missing from Mary Shelley’s Frankenstein? One would think that an author’s say over her work’s substance would be final. Yet the novel’s prolific adaptations seem obsessed with ... 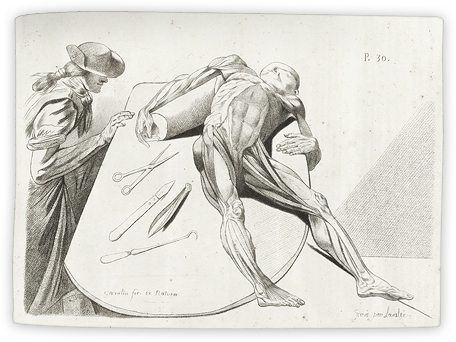 Is there something missing from Mary Shelley’s Frankenstein? One would think that an author’s say over her work’s substance would be final. Yet the novel’s prolific adaptations seem obsessed with filling in the gory details that Shelley avoids. The latest such homage, Frankenstein, by Dave Morris and inkle Studios, reworks Shelley’s text as an interactive ebook app for iPad and iPhone, changing the setting to revolutionary France and unfurling the story through a series of dialogue choices. Victor Frankenstein (and, briefly, the creature) address us as we accompany them on their adventures; an early scene, for instance, has the reader tagging along on a trip to the makeshift morgue where guillotined bodies are kept, assisting Victor as he selects a severed head from which to extract a voice box.

In the context of its glossy package and appealing presentation, this is all pretty fun. If the experience initially recalls a hokey choose-your-own-adventure novel, the interactive options prove to be less about guiding the plot than about teasing out particular themes and aspects of character. Once you choose a speech or action prompt, there’s no backtracking and trying out the others—you have to stick with your choices through to the end or reset the text entirely. In these regards, Morris playfully uses the ebook form to refract some of the fraught ambivalence of Shelley’s text. Two authoritative—and critically divisive—versions of Shelley’s Frankenstein exist: the original 1818 novel and the one Shelley significantly revised in 1831. The 1818 Frankenstein clearly foregrounds freewill and moral choice; critics such as Anne Mellor have suggested that an older, sadder, and more conservative Shelley later changed her novel to reflect a growing sense of fatalism.1 Each text has its proponents, but in truth, both negotiate between freedom and determinism, and neither version feels definitive.

In the ebook, as in Shelley’s texts, free will and fate can look unsettlingly similar. While Morris’s starting point is the 1818 edition (it’s also the one included in the app as an “extra”), the dialogue choices he presents after each short installment regularly capture an implicit conflict between freewill and determinism, both in their content and in the very limited form of agency they provide the reader. At one juncture, as the creature considers whether the ability to read will help him to overcome his ghastly condition, the reader must select one of two stark responses to his speculative questions: “Yes, there must be,” or “No, there is no hope.” Tellingly, each answer, while illustrating a slightly different side of the creature, still leads to the same unfortunate outcome. In this, Morris’s Frankenstein reminds us of what debates about the novel’s versions often miss: whether illustrating inexorable fate or the results of bad choices, the novel will still end “in darkness and distance.”

His adaptation hews so close to Shelley’s novel that these additions come across less as creative supplements than as compensatory excesses, distrustful of her work’s appeal.

Morris’s work loses its considerable luster only when it presumes to generate a more viscerally engaging reading experience than the one provided by the original text. Though Morris’s adaptation complements Frankenstein’s rich thematic uncertainty, it falters in its decision to augment those details that Shelley’s novel leaves suggestively half-sketched. Morris’s descriptive liberties—enhancing the creature’s hideousness with transparent skin; lingering over his musculature in macabre detail; adding some explicit references to sex and sexuality—are intriguing, but his adaptation hews so close to Shelley’s novel that these additions come across less as creative supplements than as compensatory excesses, distrustful of her work’s appeal. These often gratuitous augmentations become an extension of the claims, set out in the work’s press release, that “interactive literature” can enhance a reader’s “personal experience” of a novel and her “personal relationship” with its characters. Like Morris’s modernizing updates, the interactive ebook form justifies its renovation of Frankenstein by pretending to bridge a gap that allegedly exists between “classic” novel and contemporary reader. But the app’s ability to allow us to talk with Victor, or, more awkwardly, to accompany the creature in his despairing isolation, only entrenches us further in the confines of our own perspectives. Is “personalized” experience really so illuminating?

Readers of Shelley’s Frankenstein might recall that our tendency to get mired in our own viewpoints is of acute concern in that novel. There, when the creature delivers his heartrending autobiography, his narrative seeks to immerse us in the experience of what it is like to be him, to be the thing too horrible for words. What makes this attempt so poignant is the knowledge that it will fail. Language may be a godlike science, but, like any innovation, it can only get us so far.