A Riot Grrrl Zine in the Modern Age
A personal explanation: I grew up in a small town, and when I say that, I actually mean miniscule—exponentially smaller that most would assume when one describes the phenomenon of a small, rural town ...

I grew up in a small town, and when I say that, I actually mean miniscule—exponentially smaller that most would assume when one describes the phenomenon of a small, rural town. 1200 people small, to be exact, and located smack dab in the heart of Texas. Land of exceedingly right-wing conservatives and home of liberal angst. Hailing from two fairly freethinking, open-minded people, I grew into the person I am today: a liberal thinker aligned with the humanitarian far left. I empathize with others and fight for the voices of the down-trod to be heard, and as a woman from a lower middle class family, there are battles that I have experienced personally that I believe require attention and a revolution of sorts. This character type appears in abundance in places like New York City, my academic home away from Duke University this semester for the Duke in New York Arts and Media program, consequently allowing for it to be unsurprising. However, at home, I am an oddity. I embody nearly every creed that a great deal of the inhabitants of my home town resent, and I relish in it and allow for it to fuel my fire.

The thrill of being unique isn’t the causation, but rather the feeling that I am a pioneer of underrepresented ideologies. Educating my younger sister and being one of the primary resources in her self-discovery and the development of her perspectives is one such example. Similarly, I have worked to tutor my close friends and relatives. Though this act isn’t always received or enacted quite as I’d like it to be, ultimately I’m challenging others’ thought patterns and opinions in addition to my own. Striving for necessary change and educating others is the name of the game for me—if we adhere to antiquated principles, we stagnate. 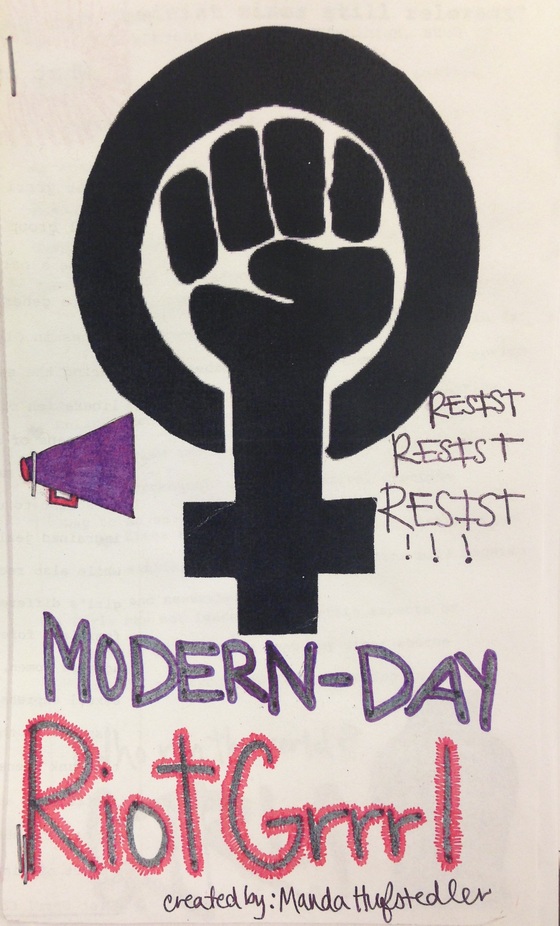 I took a particular interest in zines, as a method to spread information and foster unity in addition to the culture within which they flourished, during my freshman year in college. I arrived at Duke with dewy eyes, convinced that North Carolina was “northern,” synonymous with liberal in my naïve mind, and found myself mistaken. I’m aware of how hilariously oblivious this was for every portion of the state that isn’t Durham, a notoriously blue sector due largely to the student population. Though most of the students’ beliefs fall within my sphere of support, the problematic treatment of women on campus came to my attention. For instance, less than one-third of campus rapes nationwide result in the expulsion of the perpetrator, whether in a ridiculous attempt to protect those guilty from further “embarrassment” or because “she was asking for it,” a victim-blaming mentality. The lack of women studying STEM (Science, Technology, Engineering, and Mathematics) fields, further proven through testaments from several of my acquaintances and classmates claiming that female enrollment in said classes falls significantly after the introductory courses, is another example. Is this due to their lack of confidence, which is shown in the Duke Women’s Initiative to decrease significantly by the time graduation rolls around, or that our society simply doesn’t promote work in STEM, but rather focuses on being pretty, doing “women’s work,” and letting men take over the analytical labor? Exceedingly likely.

Fortunately, a handful of organizations on Duke’s campus create campaigns in order to educate and perpetuate positive ideologies to the student body. Not to mention groups promoting women and activism such as the Women’s Housing Option, of which I am a member, and the Baldwin Scholars. However, though these institutions exist, work remains to further women not only in the collegiate system but in our society as well. This is where the idea behind my zine originated. In the 90’s, the riot grrrl movement strove to challenge the patriarchy and called for all women to stand up and claim ownership of their bodies and rights and fight for equality. My aim was to create a piece in the same fashion—hand-drawn, handmade, and collage-esque—and include more modern issues and voices. The joke ended up being on me seeing as the majority of matters presented in the zines of our feminist past are still painfully relevant today. In doing so, I was interested in educating those who are interested and people who need it most, the method by which I believe we can progress women and dismantle our patriarchal society. The collaboration utilized to craft a zine would allow women to band together and create a support system and a collective voice not for all women, but including that of every woman. They also give women of varying abilities the opportunity to contribute- one woman may not be very articulate in her writing, but could illustrate a moving addition to the publication, or someone might be a whiz at researching information rather than organizing. Similarly, blogs, columns, and magazines function in a comparable fashion through the spread of information on topics of interest gathered via partnerships with others. The applicability of zines endures still today, though the content and methods have been altered slightly.

The search for information fostered by curiosity:

I have my mother to thank for the commencement of my budding interest in women’s issues. She was a supporter of accessible women’s health initiatives and instilled in my sister and I, much like Olivia Benson of Law and Order: Special Victims Unit, that if anyone ever touched us inappropriately, it was never okay without our permission or our fault and we should always confide in someone who can help. She listened to Alanis Morissette when we were in the car and told me, “Fuck them. You’re beautiful, smart, and amazing just the way you are, and I’m sorry for them that they can’t see that,” when I was bullied in elementary school and made sure I knew that there are infinite types of bodies and areas of knowledge- that every single person is special in their own, unique way. She taught all of her children far more comprehensive sex education than our public school would allow in their ridiculously conservative lesson plans, so we were several rungs higher, not to mention safer, than our peers. Plus, she never crushed my dreams about wanting to be Wonder Woman and let my siblings and I explore and play in whatever manners we chose regardless of whether it was with “boy” or “girl” toys and activities. That kind of acceptance so young nurtured my inner fire, independence, and confidence. Consequently, it was all the easier to notice the unacceptable lack of such lessons as a widespread practice.

From there, I begun to educate myself in high school via others’ narratives, similar to how the material in zines originated and functioned. I read countless blog posts, articles in many a hidden copy of Bitch Magazine at the public library (I was convinced at age 15 that my parents would be angry because there was a curse word on the cover), and books with strong female protagonists, though they were hard to get a hold of due to lack of such literature. Talking to my mom, grandmother, favorite teachers, and other strong women in my life broadened my understanding and concern further. Enter Manda, first semester freshman year. I was simultaneously stoked and terrified about college. I had registered for a wide range of classes to start exploring what exactly it is I wanted to study, which turned out to complicate the matter further, but I digress. Most notably, I was excited for Wednesday to roll around because I would finally get to attend my first ever Women’s Studies class. “Gender in the Christian Tradition” was the topic, one with which I had felt misaligned for a good deal of my 18 years. Through this course, my views were challenged, I learned an immense amount, and my interest in pursuing Women’s Studies was solidified. The following semester I took an academic writing course dubbed “Feminism: Politics of Pleasure,” which afforded me intellectual support for the beliefs I had developed through personal experiences. My arguments now had more extensive sources and support, and I was ready to browse the course catalog for additional courses.

My thirst for knowledge and drive to fight for all women was and remains insatiable. I strive for change and education, the ultimate force behind the creation of my original zine. The harmful perceptions of gender, race, and sexuality today must be challenged. I won’t go quietly, and I want to support and help others fight for their “undeniable” human rights that are being denied.