A Tale of Two Artists in ”La La Land”
It isn’t a surprise that Damien Chazelle’s third film, the sunny musical La La Land, would be a portrait of jazz artistry. His 2009 debut ... 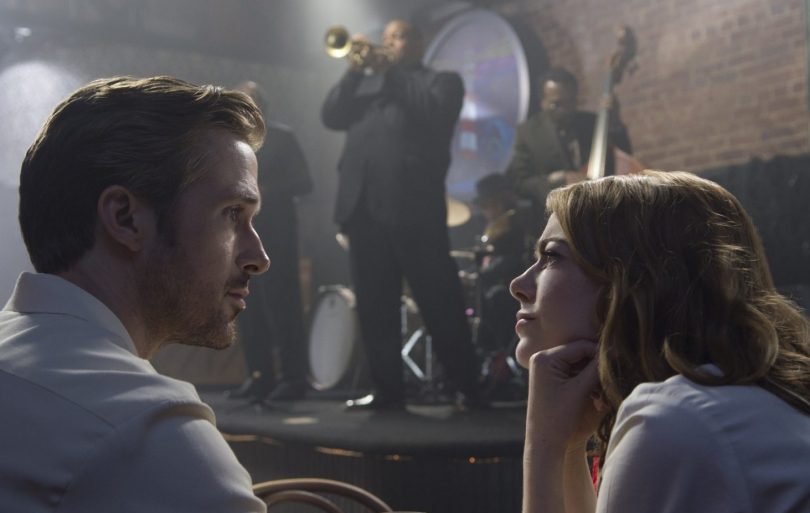 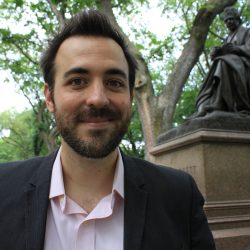 It isn’t a surprise that Damien Chazelle’s third film, the sunny musical La La Land, would be a portrait of jazz artistry. His 2009 debut, Guy and Madeline on a Park Bench, is the story of a jazz trumpeter, and his 2014 breakthrough, Whiplash, follows the apprenticeship of a jazz drummer. What is surprising is that the film’s truest exemplar of “jazz” creativity would turn out to be a young woman who knows little about the form, and claims to hate it.

Although La La Land has divided critics, all have agreed that it is a tale of two different artists working in two different mediums. Sebastian, a jazz pianist played by Ryan Gosling, is its figure of music; Mia, a would-be actress played by Emma Stone, is its figure of drama, both “strivers and seekers” making their ways in their respective lanes.1 More fraught has been the question of which artist the film seems to prefer, with some reviewers charging that it marginalizes its heroine and unduly celebrates its leading man. For Morgan Leigh Davis, La La Land is the expression of a “masochistic, obsessive, self-righteous, and aggressively male” vision, while Richard Brody finds Mia to be “an absolute cipher” and Chazelle unconcerned with her craft.2

Yet it is finally Mia who most embodies the qualities that jazz, as both a musical style and a cultural sensibility, has long been admired for. Among other things, jazz depends upon an artist’s ability to master a range of past idioms, and to bring those idioms into conversation in the present. The jazz artist creates something new, a dialectic of then and now, through a process of what Zora Neale Hurston once termed “exchange and re-exchange.”3 And if La La Land possesses this sort of jazz spirit, it is most typified by the dynamic, somewhat mysterious Mia, not the dogmatic, antiquarian Sebastian.

This can all sound strange if one holds to a literal definition of jazz, and Sebastian is nothing if not a jazz literalist. When we first view him, he is repeatedly rewinding a taped piano solo in his car, memorizing a passage that he will drill himself on when he gets home to a keyboard. He hoards vinyl, black-and-white photos of jazz icons, and cast-off club furniture, cluttering his apartment with totemic objects. He holds forth on the history of what he calls “pure jazz,” imposing so many lectures on Mia that La La Land has been described as a “musical mansplaining session.”4 Given all this, the increasingly jazz-buffeted Mia can come to seem like a victim of Stockholm syndrome. It is hard not to hear coercive forces at work in the film’s second half, when she angrily tells Sebastian, “I like jazz now because of you.”

Whatever his charms and abilities, though, Sebastian’s worldview is that of a stubborn, rigid, oddly un-jazzy crank. He seems determined not to participate in modern life: it is unclear whether he uses a cell phone, and the most up-to-date device in his pad is a microwave. His commitment to the “pure” jazz of the past sometimes veers into “white savior” territory, if not outright racism; he is hostile to the idea that samba would ever be heard in a jazz club, and condescending towards the band of largely African-American musicians that he joins to pay the rent.5 Strangest of all, his resistance to cultural hybridity appears to have blinded him to the fact that the city he lives in has been home to a remarkably vital jazz renaissance in recent years. You wouldn’t know it from listening to him, but Sebastian drives the same freeways as the DJ Flying Lotus and the expansive bandleader Kamasi Washington, both of whom had a hand in one of the most acclaimed records of the decade: the Compton native Kendrick Lamar’s jazz-rap statement To Pimp a Butterfly.

Yet it is finally Mia who most embodies the qualities that jazz has long been admired for.

When the subject is Mia, however, the traditionalist sings a somewhat different tune. In an early conversation about the kind of actress and playwright she hopes to be, Sebastian abandons his own attachment, encouraging her to create “something as interesting as you are,” and to “make history.” Seeking an analogy for the path she might take, he borrows one, unsurprisingly, from jazz: just as Louis Armstrong refused to be constrained by the “charts” he was given, so too should she leave imitation behind and throw herself into originality.

Mia responds to Sebastian’s advice by informing him that “I hate jazz,” but the film comes to conclude that she is in fact very much of Armstrong’s party, whether she would admit it or not. The essential qualities of her artistry, and the reasons for her eventual breakthrough, are difficult to pin down, because Chazelle only gestures toward Mia’s work on the stage and in the movies. But the film presents her gift as real and definable, no less so for only being approached obliquely.

We know that Mia, like Sebastian, is a diligent student of the cultural past. She fondly recalls her childhood love of classic film, and emphasizes the many hours she has spent mimicking old performances. Hence the importance of the many audition scenes in La La Land, which exist both to demonstrate Mia’s capacity for recapitulation and to underline her openness to all manner of material: whereas Sebastian winces his way through an appearance with an 80s cover band, Mia never seems to resent the well-worn stock characters and types that she is asked, again and again, to occupy.

We also know that Mia intends to transform herself in the act of pursuing her art. Where her roommates, would-be actresses themselves, imagine that they are completed persons “ready to be found” by casting agents, Mia departs from her quartet with them early in the film and looks for “a place where I’ll find who I’m gonna be” instead. Happily, she appears to locate it during her final, career-making audition, in which she performs a ballad that simultaneously brings the film to a climactic point and reveals the Janus-faced nature of her craft: she describes her work as an extension of old family memories as well as a means of inventing “new colors,” both of which are meant to come together in an unclassifiable aesthetic “mess” and “lead” to some as-yet undiscovered condition.

Mia is a force for aesthetic “exchange and re-exchange.”

It is this ability to mingle past, present, and future that most distinguishes Mia’s artistry from Sebastian’s, and that ultimately gives her the greater claim to the film’s “jazz” sensibility. The issue is not whether Mia has a specifically musical talent, though there is plenty of evidence of it in the film. Stone certainly sings better in most of the numbers than Gosling does. She turns his original solo composition, “City of Stars,” into a duet. She trades fours with him from the dance floor while he sits in with a combo. And she seems to have an unusually discerning ear, grasping Sebastian’s abilities early on and instantly understanding, when he seems not to, that he is an ill fit with John Legend’s jazz-fusion ensemble.

The larger point is that Mia is a force for aesthetic “exchange and re-exchange,” invoking that which came before and then departing from precedent in quite literally unimaginable ways. Nowhere is this more plain than in the narratives that Mia spins at the end of La La Land, which Chazelle goes out of his way to present as formally and spiritually congruent with jazz music. Her big break arrives in the form of a peculiarly avant-garde-sounding studio film, which is pitched to her as an improvisation: rather than adhering to a set script—or as Armstrong would have had it, some “charts”—she is to participate in a “process” instead, with the film evolving out of the woman at its center. Chazelle never shows us the star-making turn that results from this, but we get a hint of it in the surreal, Gene Kelly-inspired montage that defines the closing minutes of La La Land. Spoiler ahead: After Mia lands her role, the film abruptly leaps forward five years, into a future where she and Sebastian have long since been separated. Events conspire, however, to bring them momentarily into one another’s company at a music venue, and then the jazz begins: their meeting launches a fantastical sequence that reenacts earlier episodes while fundamentally altering their trajectory, arriving eventually at a different, less bittersweet ending in which their relationship has survived.

Some reviewers have assigned this final montage to Sebastian’s point of view, arguing that what we are experiencing is a work of his imagination, with Mia assigned the passive role of listener.6 I find it difficult to hear it this way, though. The performance is at the very least a mutual production. It contains information that only Mia has access to: it begins from her perspective as she watches Sebastian get fired from a gig, it touches upon the fact that she has a child, and it rehearses the LA traffic jam that has chanced to bring her, once again, into his presence. More importantly, this jazzed revision of the film’s given narrative is not the sort of thing that Sebastian, for all his enthusiasm, has demonstrated the flexibility to conceive of or create. When the sequence reaches its conclusion, Mia leaves the club, Sebastian counts off for the house band, and he begins to play something just before the credits start to roll. The actual sound of his music, however, has been rendered inaudible, left entirely off the audio track. What lingers instead in the last moments is a story of what might have been, a familiar melody that, in the hands of the film’s other artist, was profoundly otherwise. 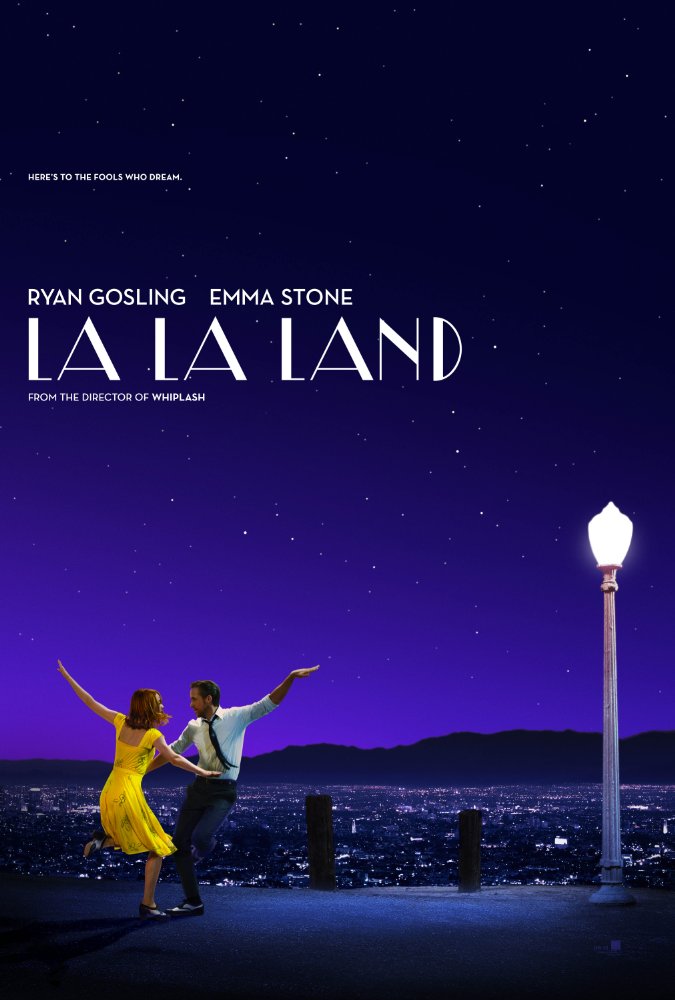