Abney Park Cemetery
This is a new installment of Public Streets, a biweekly urban observations series curated by Ellis Avery. Salvation Army officers don’t die; they are “promoted to glory.” In Abney Park Cemetery there ... 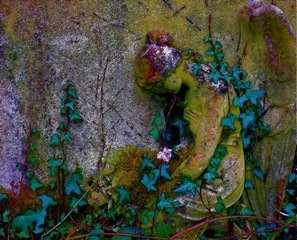 Salvation Army officers don’t die; they are “promoted to glory.” In Abney Park Cemetery there have been many such promotions, as most of the founding generation of the Salvos, including William Booth and his family, are buried here. Abney Park, one of London’s Magnificent Seven, is a big embrace. It was among the first cemeteries in London to be dedicated specifically as a burial ground for members of nonconformist and dissenting churches. There are probably more pastors, evangelists, abolitionists and missionaries per square meter here than anywhere else in the UK. Somewhat ironically, the grandest memorial—a statue glowering down from its plinth directly in front of the crumbling Gothic chapel— is for a person not buried here. The hymn-writer and logician Isaac Watts had been the most famous resident of the manor of Abney House in what was then the village of Stoke Newington before part of its grounds became incorporated into the cemetery, and Stoke Newington became swallowed up by London.

A thousand wretched souls are fled
Since the last setting sun,

And yet Thou length’nest out my thread,

And yet my moments run.
—Isaac Watts 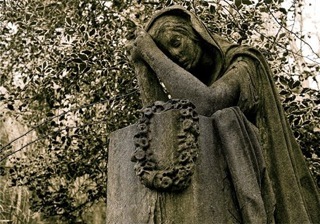 The Magnificent Seven were private cemeteries built on the outskirts of the city in the 1840s, when the churchyards of central London could hold no more dead. Now the Seven too are full, largely closed for business, and converted into parks and nature reserves. Highgate gets the most attention because it has Marx, consigned forever to the posh real estate of Hampstead. Abney Park is smaller, more secretive, and more overgrown, like its sister Nunhead down in Peckham. Gravestones confer together behind walls of ivy and honeysuckle. They list to one side, tipsy with age. They serve as treasure hunt goals for kids on field trips from school: Betsi Cadwaladr, the “Welsh Florence Nightingale.” Joanna Vassa, the only surviving daughter of Olaudah Equiano. Nelly Power, cross-dressing star of the music hall. Frank Bostock, who introduced lions and tigers to an awestruck Victorian audience, hungry for the exotic. His memorial is a sleepy white marble lion presiding over its woodland garden of nettles and campion, stag-horned black poplars and the ruins of elms.

Because this is the other thing about Abney Park: it is one of the few parks in London or any other city where trees are allowed to die normally, in the absentminded way that trees die when they aren’t being mercilessly “maintained” in the interests of public safety or—more likely—some sanitized urban vision of what a tree should look like. Abney’s trees are permitted to lose an auxiliary limb here, a leader there, or fall down entirely and resume growth sideways. They host a citizenry of bats, moths, beetles, and fungi, all living and dying within a pigeon’s flight of the Dalston hipsters who swim up Kingsland Road to spawn and metamorphose into the yummy mummies of Stoke Newington, pushing their gigantic baby buggies along Church Street, pumped with Ashtanga and lattes. 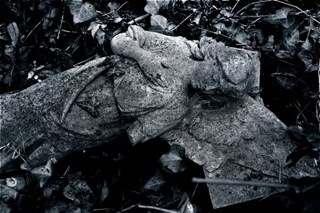 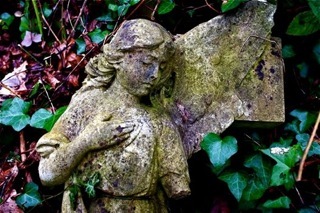 There is no complete escape here from the thirtysomethings in denial about their rapidly waning youth: joggers love Abney Park. But so does the guy with the luxuriant white beard reading a paperback on a bench, a weeping angel leaning over his shoulder. So does the middle-aged couple bickering amiably in Russian as they stroll along the path. So do the descendents of the dead of two world wars. There are fresh roses left for Private Frederick Sunshine, who died on HMS Iris II in a raid on Zeebrugge harbor on St. George’s Day in 1918. He was 20 years old. And there are many small stones placed on top of the civilian memorial from the Second World War, when Stoke Newington was a largely Jewish neighborhood. This and adjacent neighborhoods suffered disproportionately during the Blitz, as Luftwaffe bombers aiming at oil depots to the east of London missed and hit the densely-populated East End instead. I count 96 people who died on the 13th of October in 1940 alone, among them what appears to have been the entire Edelstein and Danziger households. Today a small sign in a plastic page protector is stuck to the front of the memorial, asking for any information leading to the identification of people who have stolen recent plantings from it.

Maybe the plant thieves thought no one would notice. Maybe they thought no one comes here. But Abney Park actually has a 24-hour population, although they largely keep to themselves. This gently decaying cemetery is the best and perhaps only green space available to northeast London’s homeless, a place where they can sit out of sight behind walls of foliage and drink their Strongbow cider in peace. Signs posted here and there warn sternly of the penalties of using the cemetery as a public urinal. But really, it’s good for the trees, isn’t it? And would William and Catherine Booth actually mind, given their lifelong dedication to providing some sort of refuge for the lost souls of London? They knew they were here for a short while, and did what they could. Now mayflies court and dazzle each other over their graves, drunk on spring sunlight, determined to have one last dance before they are promoted to glory.

Note: All photographs by Marzena Pogorzaly.