All About My Mother
In her canonical 1939 essay, “A Sketch of the Past,” Virginia Woolf wonders how a coherent past may be reconstructed from countless angles, styles, and past selves. How do we choose from so many ... 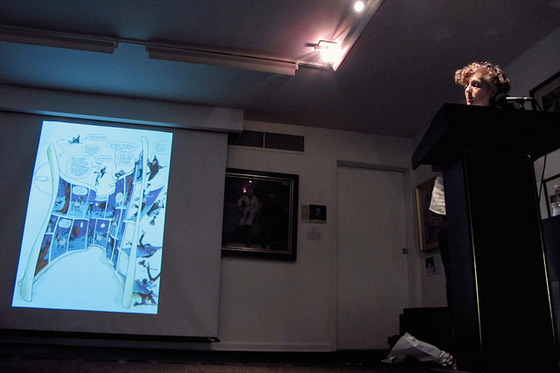 In her canonical 1939 essay, “A Sketch of the Past,” Virginia Woolf wonders how a coherent past may be reconstructed from countless angles, styles, and past selves. How do we choose from so many snapshots and memories? And how do we differentiate ourselves from the people and surroundings that shaped us?

Woolf ultimately decides to begin with one of her earliest memories, an image of “red and purple flowers on a black ground—my mother’s dress; and she was sitting either in a train or in an omnibus, and I was on her lap.”1 Soon after, she adds another memory of the nursery, and of her mother, “come out onto her balcony in a white dressing gown.”2 For Woolf, as for so many memoirists, the starting point of an excursion into the self is the mother.

Many would agree that it is through our mothers that we first come to see ourselves. This seems to be the central reason that Nadja Spiegelman chose to write her nonfiction debut, I’m Supposed to Protect You from All This, about her mother, Françoise Mouly. Spiegelman’s memoir, which spans over 350 pages, begins with an admission that the mother who dominated her daughter’s worldview from an early age has remained something of a mystery. “How could my mother ever have been a girl?” an older Spiegelman wonders. The question stems as much from her inability to imagine a world before she, the daughter, existed, as it does from her mother’s larger-than-life presence. “When I was six, and my brother a year and a half old,” Spiegelman explains, “my mother accepted the position of art editor at The New Yorker.” She portrays her mother as in “constant motion,” full of an energy that could feel by turns comforting, awe-inspiring, and disquieting. “It made her furious to see me sitting still.”

It is one thing to dig into your mother’s past, quite another to publish that exploration, particularly while that mother is still very much alive. In creating her mother’s story for the world to see, Spiegelman, in a sense, is joining a family business. Her father, Art Spiegelman, is the author of the Pulitzer Prize–winning Maus, a groundbreaking two-volume memoir composed in comic form that tells the story of how his father survived the Holocaust. This testimony of his father’s past life—his life before Art—is interwoven with an honest, sometimes scathing record of the relationship between father and son in the “present” tense of the work’s early composition.

I’m Supposed to Protect You from All This is not a graphic memoir. But much like her father in Maus, Spiegelman braids the past with the present. In sharing stories from her own life, Spiegelman simultaneously chronicles her mother’s adventurous spirit (letting her underage daughter drive a rental jeep), her disdain for certain American cultural norms (taking offense when guests arrive on time for a dinner party), her secrecy, and her anger. The book reads, at first, almost like a settling of scores: Spiegelman calls her mother a “ferociously private person,” and then goes on to relay in detail the tense atmosphere of their early life together, “the outbursts that made the house tremble and just as quickly disappeared.”

But what emerges above all else over the course of the narrative is a daughter seeking to understand her mother, to excavate the past in order to move more confidently into the present. “I have always known what it means to be a character in someone else’s story,” Spiegelman writes. She is, of course, referring to those bits of her history told in her father’s works, including the Maus series and his later book In the Shadow of No Towers, a memoir of living through the 9/11 attacks in New York City.

Her ability to overcome a brutal childhood offers hope for for all women, whose mothers come to them bearing their own fraught pasts.

With this debut, Spiegelman transforms herself from a character in someone else’s books into her own character. She notes the difficulty she often has in distinguishing her memories from other people’s, and particularly from her mother’s version of their shared past. Now, in writing the past from her own perspective, Spiegelman can begin to distinguish her outlook from the ones that have crowded and influenced it. She can begin to differentiate herself. One example where we can see this in action is when her mother tells the adult Spiegelman that “I have always loved both my children equally.” In her memoir, reflecting on the incident, Spiegelman counters with evidence to the contrary, solidifying her own version of her life story. “I clung to the moment one of [my mother’s] friends pulled me aside and told me that the imbalance in our treatment wasn’t normal,” she writes. “It was the only proof I had. Neither my mother, my father, nor my brother remembered things the way I did.”

Through detailed conversations with her mother and her mother’s mother, Nadja learns all she can about her mother’s life before their shared history. Much of the book concerns the life Françoise ran away from in Paris, including childhood struggles with her family. Françoise describes her mother, Josée, as beautiful, inattentive, and sometimes cruel. Josée had three daughters with her husband, Paul, a famed plastic surgeon whom she eventually divorced. Paul was a man known for his frequent affairs, gambling addiction, and, most disturbingly, sexually inappropriate advances toward his daughter and granddaughter. This last violation is never validated by Françoise herself, and remains a point of contention between both sets of mothers and daughters.

Spiegelman juxtaposes her mother’s painful past, which includes several instances of sexual assault as well as an unwanted abortion, with memories of her own childhood and adolescence. This tactic demonstrates how the past often repeats itself, albeit unevenly. In one chapter, Spiegelman describes her mother’s violent panic attacks. These attacks, according to Françoise, began when she was 13 and only occured around her mother. Spiegelman follows this with stories of her own memories of being 13—when she gained 15 pounds and began struggling with her weight—and how her mother’s attitudes were hurtful. “I felt that mother was ashamed of my weight,” she writes, recalling a confrontation in which she confesses to Françoise that she had started “ripping out all of my hair” and then feels embarrassed by her mother’s nonplussed reaction. Later, she describes her parents’ steely response when she announces to them that she has a girlfriend, her mother insisting Spiegelman not kiss the girl in public.

At the core of these culled recollections is less a tally of pain and grievances than a testament to survival. As Alison Bechdel puts it in Are You My Mother?, a graphic memoir that similarly explores the mother-daughter relationship, “I have not been maimed, only wounded, and perhaps not irreparably.”3 Spiegelman’s mother survived her childhood to become a flawed but ultimately loving mother as well as a renowned editor and publisher. Her ability to overcome a brutal childhood offers hope for her daughter and for all women, whose mothers come to them bearing their own fraught pasts.

Spiegelman insists on this point by giving voice to her mother’s mother (a notable difference between this memoir and other records of mother-daughter relationships such as Woolf’s To the Lighthouse and Vivian Gornick’s Fierce Attachments). About halfway through the book, Spiegelman temporarily moves to France and decides to record her grandmother’s version of the past. Just as Spiegelman remembers the past differently from her own mother, many of Josée’s recollections contradict Françoise’s version of the story. There are gaps and discrepancies that can never, will never, be filled in or reconciled.

All three women at the center of Spiegelman’s book find that adolescence transforms them into what Jessica Valenti so aptly terms a “sex object” in a recently published book by that title.4 Valenti realizes that sexual exploitation links all the women of her family and fears that “having a girl means passing this thing on to her, this violence and violations without end.”5 Similarly, the women in Spiegelman’s book all find their selfhood violently interrupted by people and forces that seek to shame them. Their own mothers can be blind to those forces, and sometimes even embody them. By putting three generations of women’s memories on paper, Spiegelman cannot heal their wounds. But she can finally enable them to become the chroniclers of their own stories.

I’m Supposed to Protect You from All This