Americans in Bulgaria
Loving Eastern Europe is a tricky business. In theory, the term “Eastern Europe” is reductive and clumsy. In reality, it often feels deeply and self-evidently true. This puts those who document the ... 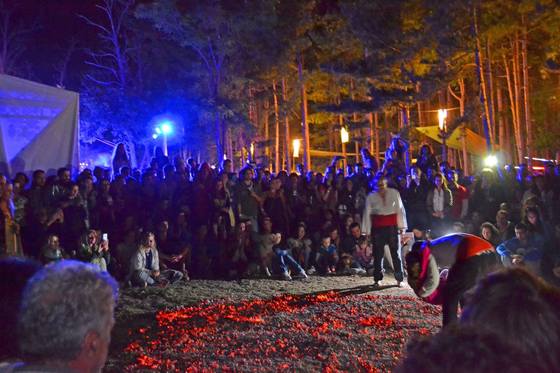 Loving Eastern Europe is a tricky business. In theory, the term “Eastern Europe” is reductive and clumsy. In reality, it often feels deeply and self-evidently true. This puts those who document the region in a tough spot: how does one convey its idiosyncrasies to the Western eye without lapsing into Soviet caricature? As Anita Starosta declares in her recent book Form and Instability: Eastern Europe, Literature, Postimperial Difference (2015), the “category of ‘Eastern Europe’ … is out of step with history.” Two new novels set in Bulgaria—Garth Greenwell’s What Belongs to You and Miroslav Penkov’s Stork Mountain—attempt, nonetheless, to reconcile the local’s realist malaise with the foreigner’s enduring romance. They notably both do so in English, interweaving a studied awareness of language barriers with an eye to those same barriers’ transcendence.

On the surface, the books are remarkably similar. Each chronicles a young, single, educated American man’s somewhat aimless life in Bulgaria, and both chart ill-fated love affairs with a “native informant” from that country. Greenwell and Penkov, likewise, are careful not to depict a world that lends itself to smooth translation, and draw frequent attention to the fits and starts of getting by in a second language (Greenwell’s narrator is a teacher at an international school who learns Bulgarian as an adult, while Penkov’s is a grad school dropout who returns to his rusty native tongue). For the most part, though, the similarities end there. What Belongs to You is a tight, compact narrative of less than two hundred pages, while Stork Mountain sprawls in all manner of historical and mythological directions for more than twice that length. Whereas the former takes place almost entirely in Bulgaria’s capital city of Sofia, the latter confines itself to a tiny fictional village called Klisura in the remote Strandja Mountains near the Turkish border. 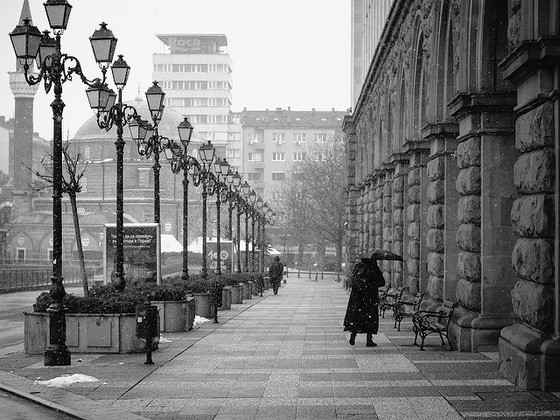 A rainy day in Sofia, the capital of Bulgaria. Photography by Tuncay / Wikipedia

The main virtue of Greenwell’s approach—psychologically textured and often naturalistic in its focus on the scents, in particular, of erotic connection—is in its coupling of intimacy and alienation right down to the sentence level. We are introduced to the sometime-prostitute Mitko, the novel’s secondary character and namesake of the award-winning novella out of which What Belongs to You grew, through a series of specificities that reveal frustratingly little about their subject. Upon meeting him in a bathroom at Sofia’s National Palace of Culture, the narrator describes Mitko’s demeanor as “cordial and brash, entirely public in that place of intense privacies,” and notes that he wears “the close-cropped military cut of hair popular among certain young men in Sofia, who affect a hypermasculine style and an air of criminality.” From there on, Mitko’s characterization only grows more familiar: his chipped tooth, his big hands, his air of goofy innocence that gives way to occasional storms of financial desperation.

Mitko himself, however, remains just out of reach. We never quite know what about him is real and what is the narrator’s projection, and likewise whether he is meant to exemplify or depart from the “certain young men” who serve as a point of social reference. In part, this is because we literally can’t know how he speaks, as the whole text is presented in what J. M. Coetzee might call a “phantom” Bulgarian, a reference to the South African author’s take, in his 1988 collection White Writing, on his compatriot Alan Paton’s rendering of Zulu. Greenwell’s narrator, who is not named, must learn to identify Mitko by a series of key terms that serve double duty as lessons in Bulgarian: “Sudba,” for example, “the single word serving to dismiss at a stroke all choice and consequence.” As a result, the novel’s most memorable moments tend to be those that name a void in relation or understanding, what Greenwell’s narrator later calls “the half-caught phrase or gesture, the assumed meaning I can’t share.”

For Greenwell, this estrangement is a blessing in disguise. The narrator’s incapacity to fully get to terms with his lover or his lover’s language is the point of departure for powerful meditations on other, distinctly American kinds of distance. We learn through vivid flashbacks that the narrator’s sexuality was fledged in a dual act of cruelty: he’s made to watch his first, teenage love interest have sex with a girlfriend to ward off his attraction, and the same attraction leads his working-class father to disown him. The scenes in which this story are revealed are without doubt the most luminous in the book, those at which the reader draws a line back from ambivalent adult lust to its seminal adolescent despair. “I’ve sought it ever since,” the narrator confesses, “the combination of exclusion and desire I felt in his room, beneath the pain of exclusion the satisfaction of desire.” What Belongs to You is most appreciatively read, then, as what it never quite manages to offer: it is an essentially American tale of going elsewhere to stay lost.

Stork Mountain is more ambitious in its reach and still more satisfying in its result, though it sometimes loses sight of its larger redemptive vision. If Greenwell’s Bulgaria is a backdrop for learning to live with uncertain connection, then Penkov’s is the stage on which connection is reaffirmed. Unlike Greenwell (who was born in Louisville), the Bulgaria-born, Michael Ondaatje–mentored Penkov joins an illustrious post-Soviet diaspora who write in English: Gary Shteyngart, Lara Vapnyar, and Aleksandar Hemon, to name a few. His own version of the searching, anonymous American narrator bears traces of this biography, returning to his native Bulgaria to sell off family land. In order to do this, though, he must first track down his grandfather, a retired schoolteacher who was once expelled to the village of Klisura by the Communist Party. When the book opens the grandfather has gone off the grid: he now writes letters, plays cards, and drinks rakia (a potent Balkan fruit brandy) in exactly the same spot to which he was long ago banished, which is where Greece, Bulgaria, and Turkey—in both legend and terrain—converge.

Penkov fills his novel with a motley cast of other characters who allow him to indulge his penchant for myth, with frequent departures to elaborate regional legends both real and made-up (in the latter category, my favorite is the Slavic goddess “Starost,” or Old Age). Whereas What Belongs to You flashes back in space and time from Sofia to the suburban United States, Stork Mountain aims to unify its village setting by getting out of time, or even before time, in order to make this locality carry the whole tale. Present-day Bulgarian border tensions between Muslims and Christians, as well as between Greeks and Turks, are explained again and again through common lore, an oral archive of “khans and tsars, of great heroes,” many of which are compiled in the (real) Nominalia of the Bulgarian Khans. The stylistic result creates the pervasive sense of being in a breathlessly imaginative rather than obviously historical terrain, even when Penkov ventures a firm condemnation of Bulgaria’s more recent past. “What a monster this Communist Party was,” the narrator thinks at one point, “An omnipotent hydra with many heads and all of them breathing fire.”

This similarity helps hold the book together: in addition to the grandfather’s tales of cultural origins, Stork Mountain also flashes back to his own youth. We learn of his doomed efforts to educate Christian and Muslim children side by side in a schoolhouse he rebuilds; and the village dwellers who populate these scenes—a dishonored mayor, a love struck shepherd’s daughter—seem hardly less legendary than the Dionysian hot-coal-dancing nestinari, Christian wanderers around whose presence Penkov’s plot unfolds.

Even the yearly dance of the nestinari—a uniquely regional tradition fusing Eastern Orthodox beliefs with pagan tradition—can thus seem like a distraction from the larger-than-life present tense relationships that are Penkov’s forte. The nestinari’s role in Klisura is, at first, depicted with the full dramatic thrust of legend, as a sultan on a white horse abandons his feverish young love interest to dance entranced for seven days. “Not once did she stop to eat or drink water,” the narrator recounts to his own new lover, Elif, the local imam’s rebellious daughter. “Seven, fourteen, seventeen villages she encircled and still she kept dancing.” By the end of the book, though Penkov still affords them deep respect, such fabled recollection of nestinari long gone seems part of the narrator’s larger graduation from cultural illusion to personal depth: the nestinari of the book’s present tense are a tourist attraction, and they pale in comparison to the strong-willed Elif determined to make her way to the university. In place of the flames and mysticism through which the narrator first encountered the Strandja Mountains and re-encounters his grandfather, we get the grandfather himself. In place of the “imam’s daughter,” we get a fallible woman who miscarries and then leaves.

Eastern Europe, in Stork Mountain, thus starts with the promise of “essential” revelation; and concludes with an old man, his grandson, and their pet stork, who wanders a dusty yard with a sad, broken wing. The myths and legends through which the Strandja Mountains assume weight in the novel’s secondary strains still echo, but the reader is mostly invested in the vibrant souls responsible for their re-telling. Penkov, then, gives us a heady pairing of Eastern cosmopolitan promise and its prehistorical anchor. In contrast, Greenwell adapts post-Soviet urban malaise to convey the acute personal alienation of queer American coming-of-age. If What Belongs to You is the less sweeping effort of the two, it is redeemed by the precision of its lapses in possibility for mutual understanding. Read in tandem (and they should be), these polished writers make us reckon with the rewards and disappointments of seeing a small place as the key to quenching an epic desire. They remind us why one might journey to a place like Bulgaria, and also of what we might not expect to find.

What Belongs to You