Are Diamonds Conflict Gifts?
When De Beers launched the ad campaign “A Diamond Is Forever” during the post-WWII jubilance, they faced a generic difficulty associated with gift giving, which is that “among refined and sensitive ... 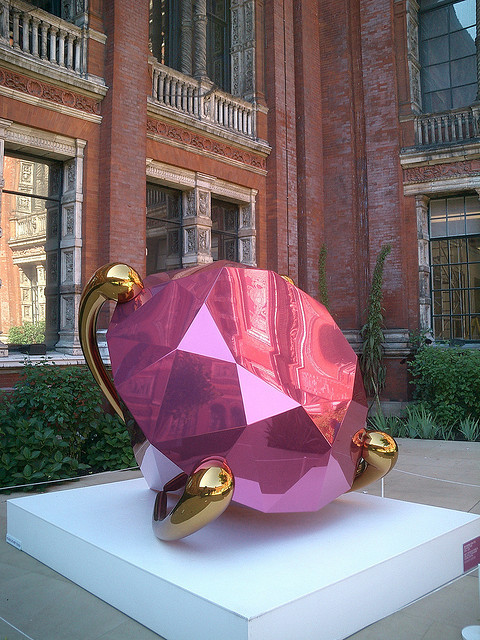 When De Beers launched the ad campaign “A Diamond Is Forever” during the post-WWII jubilance, they faced a generic difficulty associated with gift giving, which is that “among refined and sensitive people presents that are meant to pay tribute to a person must make the money value imperceptible.”1 A gift should be valuable but make no reference to its monetary value, a situation that is difficult to square with the material culture of diamonds that Susan Falls takes as her object of analysis in Clarity, Cut, and Culture: The Many Meanings of Diamonds.

Displayed on the body, diamonds are an iconic example of what Thorstein Veblen called “conspicuous consumption,” which is part of the signaling work that diamonds and other types of high-status gifts do. With diamond engagement rings in particular, not only do the rings signify a particular socioeconomic status, they also symbolize the love between two people. Conflating these two types of status—wealth and the depth of a couple’s love—is tricky terrain indeed. Gifting a diamond, then, has always been accompanied by symbolic conflict at the intersection of conspicuous consumption and the preference that, as a matter of etiquette and decorum, gifts appear to be “priceless.”

Falls’s first chapter provides a history of diamonds as an extractive commodity; the second tells the story of the De Beers ad campaign through which the general public came to believe that men ought to give women diamond rings as part of the marriage proposal. These chapters cover well-documented territory but nonetheless help constitute the book as a complete whole and offer an enjoyable if unsettling tale that establishes the organization’s culture and contextualizes its current monopolistic policies.2 Subsequent chapters give Falls space to explore the marketing and consumption of diamonds from a number of angles, including the work diamond owners do to transform mass-produced commercial messages into meaningful practices in their own lives; the way they deal with emotions like shame; and the performance of “authentically” wearing diamonds given the presence of fakes and the problem of potentially coming off as a “cultural dupe.”3

The fact that the De Beers campaign has been so successfully embedded in American courtship rituals adds to the symbolic conflict. For the well-educated, wearing a diamond engagement ring is now subtly tainted with a sense of capitulation to commercial pressure via a clichéd message propagated by a giant corporate monopoly. In Clarity, Cut, and Culture Falls uses interviews with “mostly white women, between the ages of twenty-five and forty, who fell into the gross category of the educated middle class” to examine what these urban-dwelling middle-class couples do at the intersection of romantic commitment, advertising, consumption, and commerce.

Gifting a diamond has always been accompanied by symbolic conflict at the intersection of conspicuous consumption and the preference that gifts appear to be “priceless.”

Falls’s research indicates the breadth and depth of the penetration of diamonds among American consumers. Over 70 percent of American women own at least one diamond. It seems there are no easy substitutes for the performative work of diamonds as symbols of lasting status—either as signifiers of socioeconomic achievement, true love, or both. Further, because diamonds have been treated as symbols of love, kinship, and commitment for decades, today’s couples often receive diamonds from grandparents who are themselves accessing culturally available performances of connection and commitment by giving diamonds to their grandchildren. In other words, families pass diamonds through kinship networks that can both amplify and reduce the conflict associated with this symbolic gift. For those concerned about the human suffering that is part of diamond mining, receiving a diamond from an elderly relative can reduce the guilt associated with the purchase of new diamonds. Other recipients, however, were uncomfortable wearing diamonds altogether and resented the expectation that they would joyfully accept and subsequently wear them to symbolize their love for parents, grandparents, and/or spouses.

The one misstep in the book is the fifth chapter, “Diamonds and Bling,” which aims to look at diamonds worn by rappers and others who appear in music videos by way of the Russian literary theorist Viktor Shklovsky’s concept of ostranenie—making the familiar strange. Unfortunately, given the book’s thin interview data and failure to include interviews with anyone who actually practiced an ostentatious display of large quantities of diamonds, this chapter adds a whiff of racism and elitism to a work whose biggest weakness is a lack of diversity among the interview pool. Unfortunately, we never hear about how wearing diamonds might be different for working-class people or, for that matter, the very wealthy. Exchanging an expensive token as a symbol of priceless love and commitment is a practice rife with implications for the lived reality of class distinction and the limited interview pool is a missed opportunity to engage more fully with the way class is lived in America. Introducing diversity through a racialized depiction of diamonds as ostentatious “bling” in rap videos and among African American celebrities takes an uncomfortable slide towards conflating race and class.

Among her largely white, middle-class interviewees Falls successfully untangles the complexity of their relationships to diamonds. She notes that they “tend to swallow ad meanings when it comes to thinking about other people’s diamonds or about diamonds in the abstract, but they reject or transform publicly circulated meanings when confronted with their own individual gems.” Deborah, a park ranger with a diamond engagement ring, is troubled by diamonds because “I know that they are not rare and that a lot of people get exploited. Personally I don’t want to support the exploitation, or the myth.” At the same time, because her ring symbolizes ties to her husband and his mother (the ring’s previous owner), she wears it without guilt. Margalit also placed kinship above commerce, succinctly summarizing the most common attitude among the women interviewed: “I am not really that into diamonds, but I am into my husband and I love being a part of his family.”

The latter quote makes it obvious how thoroughly the De Beers campaign has forced its way into the American psyche, where many of us construe our own attitudes toward diamonds as symbolizing love and lasting kinship. While our diamond wearing is wholesome, a similar diamond on another finger offers a place for us to locate the guilt associated with the perpetuation of inhumane mining conditions and the shame associated with capitulation to the coercive pressure of commercial marketing campaigns. In that sense, when we wear diamonds, we are giving strangers a way to unburden themselves of the shame and guilt about their own diamonds by playing the scapegoat. The conflict in the gift of a diamond is a collective conflict, borne by everyone and no one at the same time.

Clarity, Cut, and Culture: The Many Meanings of Diamonds