Can You Feel It? “Happening” and Sensory Cinema
A new film centers on a young, unmarried woman’s attempts to secure an abortion—over a decade before France legalized the practice in 1973. 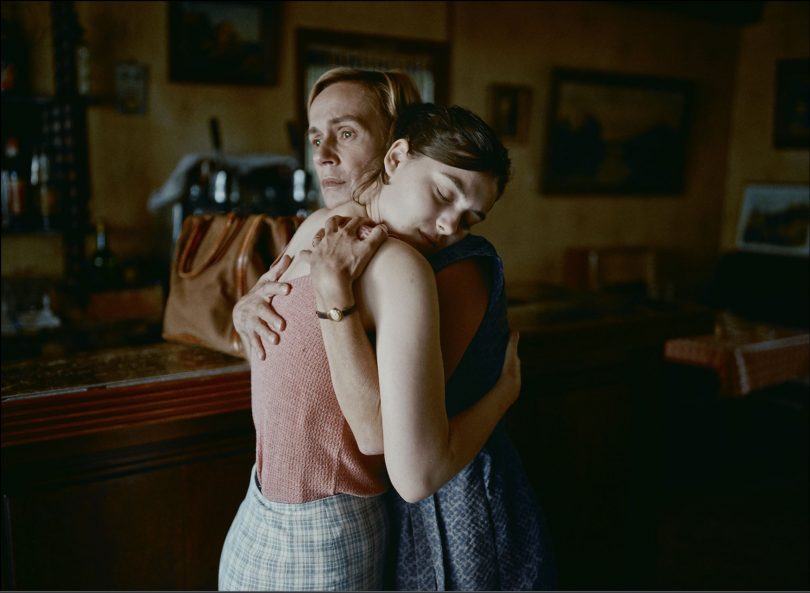 “You cannot ban abortion. You can only ban safe abortions.” So stated the governor of Oregon the day after Politico leaked a draft Supreme Court ruling overturning Roe v. Wade, the 1973 case that secured the right to abortion across the US. Few cultural productions have testified to the truth of the governor’s statement quite as viscerally as Happening.

Directed by Audrey Diwan, this 2021 film was adapted from Annie Ernaux’s abortion memoir, L’événement, which was published in France in 2000 and translated into English by Tanya Leslie in 2001. Largely faithful to Ernaux’s text, the film adaptation tells the story of Anne (Annie to her parents), a talented student from a working-class background. Just as she is preparing for her end-of-year exams, Anne realizes that she is pregnant. This spells disaster for a young unmarried woman with Anne’s means and aspirations. “I want to continue my studies,” she tells her doctor. “It’s essential for me.”

But this is 1963, and abortion would not be legalized in France until 1975. So Anne does what she can: she begs her doctor for injections, inserts a knitting needle into her vagina, and then, when none of this works, undergoes two procedures at a backstreet abortionist’s. The second of these is successful, but Anne hemorrhages in her dorm room and is hospitalized. You can only ban safe abortions.

One of France’s most successful contemporary writers, Annie Ernaux is known for “her confessional, autobiographical accounts of female experience.”1 Ernaux has described her mode of writing as écriture plate (“flat writing”): her prose is spare, honest, unadorned.2 A similar flatness and honesty is produced through the camera work in Happening, under the direction of cinematographer Laurent Tangy. Tangy’s approach is a light touch one that produces closeness and intensity. His camera closely tracks Anne’s gaze: we are with her as she goes to class, goes dancing, and anxiously checks whether her period has come. In the abortion scene, the camera peers over Anne’s shoulder, framing the abortionist between Anne’s bent legs; from this position, we can almost feel her hot, strained breath at our ear. The effect is deeply claustrophobic, but also understated and naturalized. Here and elsewhere, the film artfully replicates Ernaux’s first-person perspective and transparent, realist mode. 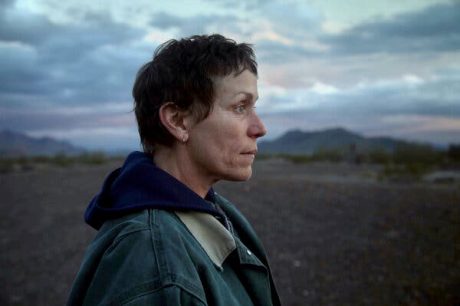 In L’événement, Ernaux writes that she “would not want crying and shouting to feature in this text because they barely featured in my life at the time.” Guarding against “lyrical outbursts such as anger or pain,” Ernaux seeks “to capture the impression of a steady flow of unhappiness.”3 Diwan’s film adaptation does the same: Anne never cries or laments the injustice of her situation, but her state of worry clearly permeates her everyday life. Anamaria Vartolomei gives a brilliantly restrained performance in the principal role, her exacting gaze conveying Anne’s fear, exasperation, and determination. At times, the “steady flow” of the film becomes frustrating: Why can’t Anne express her desperation, say the words “I need an abortion, please help me”?

This is, of course, the point: anyone caught aiding or abetting her in procuring an abortion could face lifetime imprisonment. In fact, the word abortion is never once uttered in the film. As Ernaux puts it, “this thing” has “no place in language.”4

In any case, language is not the main business of Happening. The film deals above all in sensation: it is intensely corporeal, unflinchingly fleshy. As Anne waits in line for the communal showers in her dorm, wet, naked, desexualized bodies pass in and out around her, shrouded in steam. Just after she finds out she is pregnant, Anne contemplates her figure in the mirror, in plain cotton underwear. The effect of the mirror is to double her body on screen; flesh is reflected as flesh. Later, on an ill-fated trip to see the man by whom she fell pregnant, Anne recklessly swims out to sea. The camera is half-submerged beside her, brownish waves splashing up against it—against us. Like Anne, we feel the bracing cold of the water, the tug of the current.

This was Diwan’s intention. “The idea was to focus on her body,” the director has said. “I asked myself: How can I film this so that we’re not watching Anne, but rather become her?”5

Encouraged to “become” Anne, Diwan’s audience responds to her film on the level of sensation more than that of cognition. The scene at the abortionist’s is excruciatingly drawn out, and similarly, when Anne employs the knitting needle in her home abortion attempt, the camera lingers just inches from her tortured face. For the viewer, this inspires a visceral, unmediated response: watching the film in a dark cinema, I grew hot and faint and squirmed in my seat. The man next to me covered his eyes with his hands.

One of the most remarkable moments in Happening follows Anne’s second, “successful” visit to the abortionist. After Anne rushes to the bathroom, the camera slowly pans down from her face to reveal the bloody, formless fetus in the grubby toilet bowl, suspended from her body by the umbilical cord. Here, Diwan replicates the frankness with which Ernaux narrates this scene in L’événement. To watch this, though, is even harder than it is to read it—but no less important. We must acknowledge the gruesome, unpretty aspects of abortion (particularly illegal abortion) if we are to support abortion rights at all.

In its pressing closeness and corporeality, Happening can be considered part of what film theorist Martine Beugnet calls the “cinema of the senses”: through sounds and images, this cinema appeals to other sensory experiences, such as touch, taste, and smell.6 In Happening, that is the case even in the more mundane scenes.

“Happening” deals above all in sensation: it is intensely corporeal, unflinchingly fleshy.

Near the start of the film, Anne asks her two best friends, Brigitte and Hélène, whether they have any chewing gum. They don’t, so Hélène passes the piece she is currently chewing from her mouth to Anne’s. Tender but faintly repellent, this scene evokes the wetness of exchanged saliva, the fading minty flavor of the used gum. Later, Brigitte instructs Anne and Hélène in her favored masturbation technique. As Brigitte reaches orgasm, her moans are overtaken by the sound of vomiting and the camera cuts to Anne, hunched over a toilet bowl. There is a hint of causality here: lust begets morning sickness (and eventually abortion, and another expulsion from Anne’s body into a toilet). The noises emitted in this sequence highlight the students’ struggles to contain their bodies and desires and underline the sheer physicality of their experiences.

Happening invites a “haptic,” or tactile, gaze here: it engages the non-audiovisual senses (sex and vomit connoting touch, smell, taste), and encourages “the viewer to respond to the image in an intimate, embodied way.”7 Recalling her abortion in L’événement, Ernaux states that she wishes “to revisit every single image until I feel that I have physically bonded with it.”8 Happening enacts a similar form of physical bonding as its camera draws us in close, confronting us with fleshy realities and inviting a sensory response.

In my case, this response took the form of faintness and squirming. The stripped-down, stark corporeality of the film becomes both excruciating and exhausting, particularly in the abortion scenes. Yet this is precisely the power of the film—there is no scopophilia, no viewing pleasure, just a young woman and her unruly body.

In the end, Happening is an account of everyday lived experience, in all its wild, unbearable materiality. And it is a deeply feminist film, even if (or perhaps because) watching it can feel like an ordeal. In L’événement, Ernaux writes that she “simply needed to confront these people with the stark vision of reality.”9 Diwan takes up this imperative with great nerve, involving her audience and presenting her subject matter exactly as it comes: fleshy, uncomfortable, unembellished. In this sense, Happening pushes at the boundaries of what cinematic experience can be—unpleasant, perhaps, but also visceral and transformative. 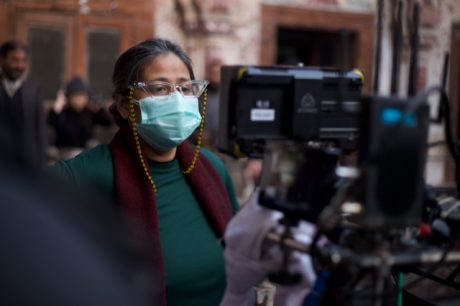 In writing her abortion memoir, Ernaux felt a similar sense of feminist duty: “If I failed to go through with this undertaking, I would be guilty of silencing the lives of women and condoning a world governed by the patriarchy.”10

Diwan likewise sees Happening as politically urgent. Ernaux narrates L’événement retrospectively, re-creating the events of 1963 from her perspective as a writer in 1999, but Diwan does away with this split temporal plain. “If I had included the author looking in the rearview mirror, I would have confined this film to the past,” Diwan told the critic Lauren Elkin. Instead, Diwan “asked the art director to create [a version of] the 1960s that would go unnoticed,” so as to emphasize the film’s relevance to the political present. Unfortunately, Diwan said, “the story we’re telling doesn’t inspire the least bit of nostalgia.”11

On June 24, 2022, Roe v. Wade was overturned. Around 33 million women now live in US states where abortion has been, or is set to be, banned. Many will be forced to go through with unwanted or dangerous pregnancies, and many will risk their lives to avoid doing so.

Happening, then, focuses its audience’s embodied attention on issues that remain agonizingly pertinent today; Anne is a figure for many millions of other women. In L’événement, Ernaux states that her “personal experience of abortion, i.e. clandestinity, is a thing of the past.”12 If only. 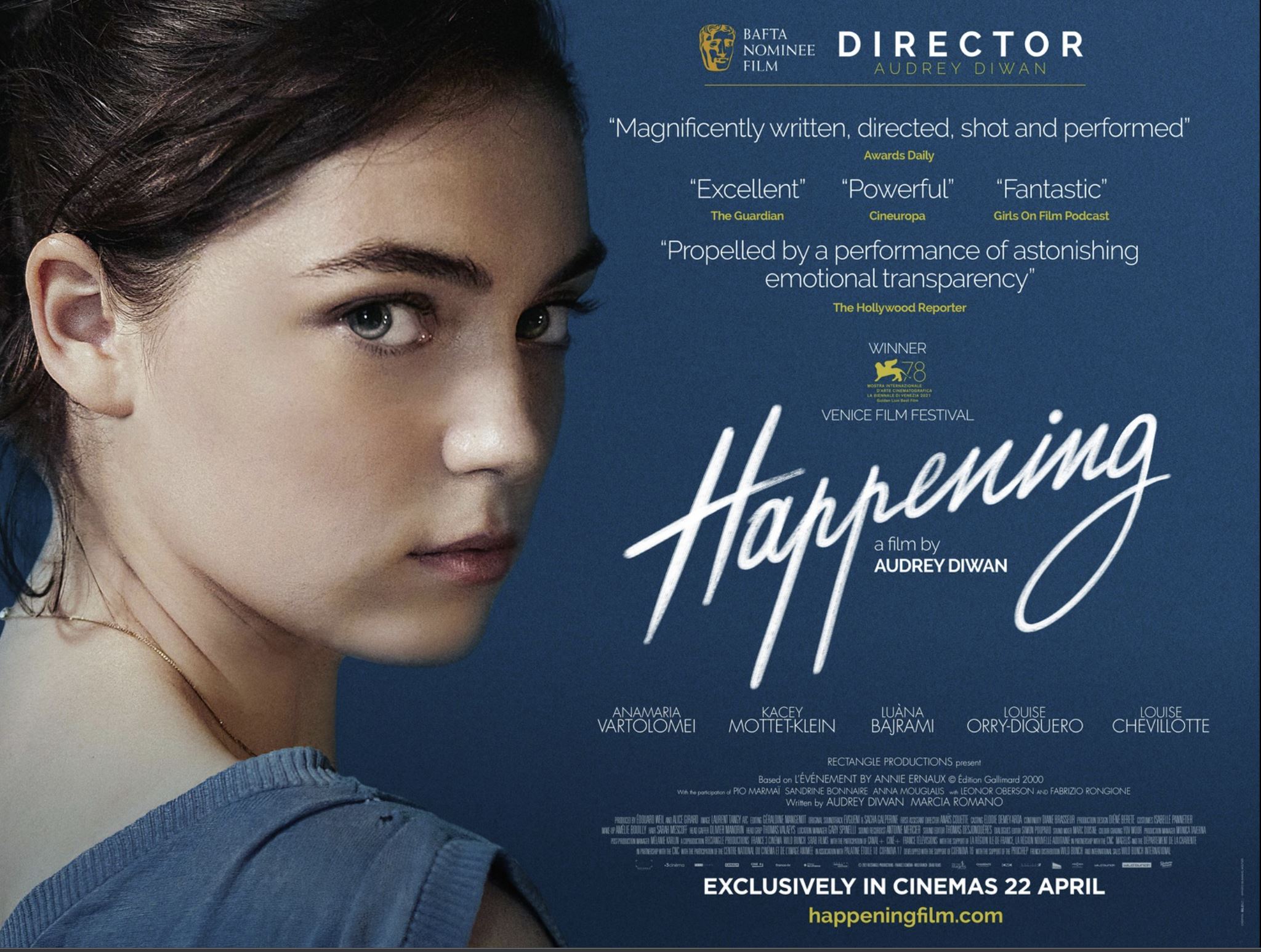