B-Sides: Elinor Wylie’s “Atavism”
Caesuras do things to stories—and to readers, even readers too young to know the term. 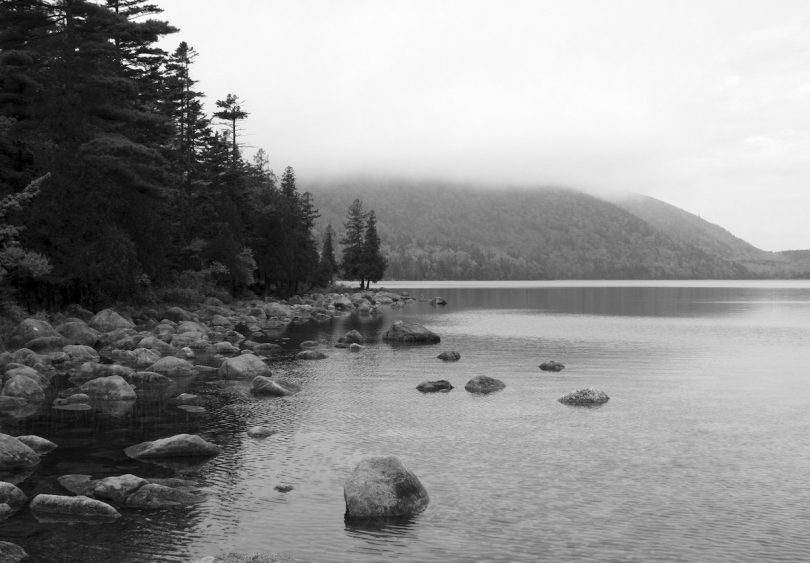 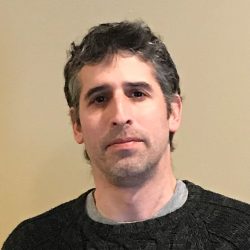 When I was maybe seven or eight, I bought a stack of old Life magazines at a garage sale for $1. I had wanted the TV (only $5), but my folks quickly nixed that idea. I believe, or at least I want to believe, that I first read Elinor Wylie’s poem “Atavism” in that horde, that midden. It is long gone now, but a search in a more modern textual landfill—Google Books—can summon the magazine issue as if it were still in my hands in my childhood bedroom. With a certain date (November 24, 1952) and more advertisements than I remember, that particular issue was commemorating the 40th anniversary of Poetry magazine by showcasing 11 of the poets it had published. The 10 other poets listed (among them Edna St. Vincent Millay, William Carlos Williams, Robert Frost, Marianne Moore, Wallace Stevens, and, yes, Ezra Pound) could still make up a Modernism 101 syllabus.

Nonetheless, Wylie’s was the poem I remembered. Not because I understood it (I still don’t), but because of its haunting sounds and fearful images, because of its unknowing. The poem—one of her first—was originally published in the April 1921 issue of Poetry alongside what is probably her most well-known poem, “Velvet Shoes,” and two others. Harriet Monroe named the grouping “Still Colors” and would later write that Wylie’s “emotion is shy and delicate, as of a cool small wild-flower growing, by some whim of Nature, not in the woods, but in the protected area of a garden.”1 Though this characterization fits Wylie’s generally polished forms very well, “Atavism” was anything but a protected garden.

Here, courtesy of the Modernist Journals Project, is what the poem looked like in 1921:

I always was afraid of Somes’s Pond:
Not the little pond, by which the willow stands,
Where laughing boys catch alewives in their hands
In brown, bright shallows; but the one beyond.
There, when the frost makes all the birches burn
Yellow as cow-lilies, and the pale sky shines
Like a polished shell between black spruce and pines,
Some strange thing tracks us, turning where we turn.

You’ll say I dream it, being the true daughter
Of those who in old times endured this dread.
Look! Where the lily-stems are showing red
A silent paddle moves below the water,
A sliding shape has stirred them like a breath;
Tall plumes surmount a painted mask of death.2

The poem begins with a retrospective “I,” which always ought to suggest a measure of safety, a story being told years later from an armchair, but by the end—following a moment entreating us to “Look!”—we are met with a very vivid “painted mask of death.” The quick turn pulls the reader into the dread of the poet and the slideshow of her lyric mind: the outward scene, the turning inward, and then the gesture to look back outward, into the traces of a subsisting past.

We mostly use the term “atavism” (avus, Latin for grandfather) in a biological sense, to describe the recurrence of an older genetic trait. The poem works with other senses of return—be they those alewives (fish) that come back to freshwater to spawn or the haunting echoes of poetic sound itself. Psychologists might tie atavism to repression—or it might play (dialectical!) counterpart to Hegel’s Schlachtbank, the “slaughter-bench” he viewed as epitomizing history. Placed alongside the poems we’ve come to know as modernist, Elinor Wylie’s overly formal verse feels rather atavistic. That feeling lingers even if the comparison is to the formal sonnets of Wylie’s friendly acquaintance Edna St. Vincent Millay; Wylie’s verse feels more shadowed by the previous century than Millay’s. 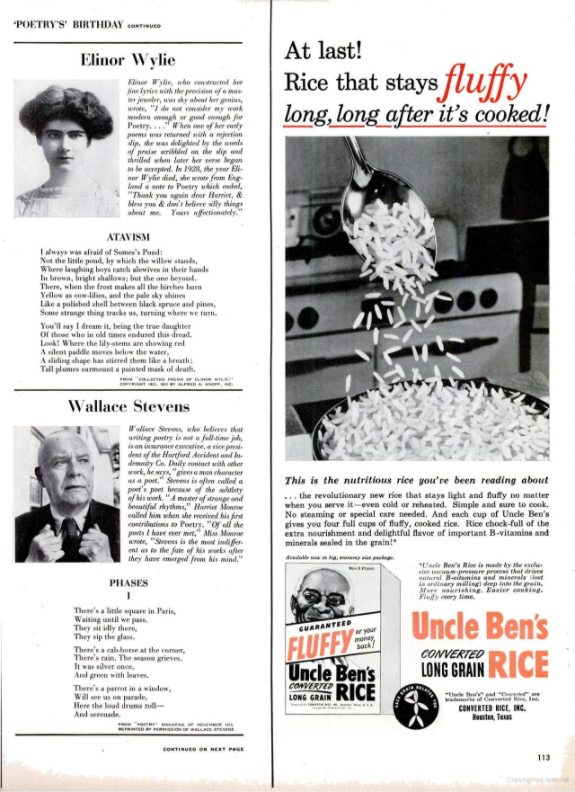 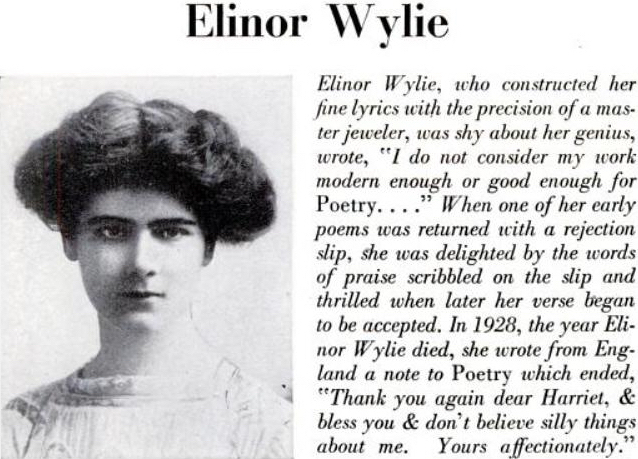 Given the chilly detachment of Wylie’s lyric “I,” it is ironic what a media splash her fascinating life made. Wylie’s biographer Stanley Olson wrote that, like Byron, she was “mad, bad, and dangerous to know.” Born in Somerville, New Jersey, she was first educated at Mrs. Flint’s and then followed two of her teachers south to Holton-Arms, still a DC-area preparatory school for young women. There she aced her courses in history, political economy, astronomy, French, and Shakespeare, but wasn’t as up to par in her class on “deportment.” Schooling soon gave way to her young life as a debutante, which in turn gave way to young married life with the psychologically unstable Philip Hitchborn. Before long, the glamorous young Elinor, regularly featured in society and gossip pages, left that miserable first marriage (Philip continued to be dogged by mental illness) and earned herself social ostracism by flying to England with her soon-to-be-but-not-yet second husband, Horace Wylie.

Here her story begins to shift. Her short-lived but blazing literary career started right after the Great War (“Atavism,” stunningly, was one of her first publications); Nets to Catch the Wind, awarded the first-book prize from London’s Poetry Society, came out at the end of 1921. She was briefly poetry editor of Vanity Fair, hobnobbing with Sinclair Lewis, Carl Van Doren, Dorothy Parker, and Katherine Anne Porter, whose all-too-perfect caricature sketch of Wylie survives. She published a couple more collections of poetry and a few novels, including Jennifer Lorn and The Orphan Angel, which imagines a miraculously undrowned Percy Shelley (“Shiloh”) adventuring across America in search of a woman he can’t be certain even exists. Given their similar histories, Wylie’s fascination with Shelley was understandable, and the result is a wild, wishful, picaresque novel. Reading it leaves me wondering whether Shelley may have been more modern than he is often credited to have been—unless this particular portrait is just Wylie’s atavistic sensibility pushing her toward the past.

Even now, I can hear the echoes of her “Atavism,” like all great poems, still tracking me, turning where I turn.

Still burning her candle at both ends and only 43, Wylie died of a stroke on December 16, 1928. The critic Louis Untermeyer (reliably judgmental, dependably petty) called her work “a little too brilliant.” But it is the nonbrilliance—that darkness hiding underneath—that is so compelling about “Atavism.” Like most of Wylie’s early work, the poem carries an edge, a cruelty that ensnares readers in their own buried prehistory. Why, the young me wondered, was she always afraid of this dangerous place, Somes’s Pond? That the pond is explicitly named meant that it was geographically contained, meant that it was a place we could avoid. And yet the place still had a frightfully vacant name, echoed as it was in the uncanny phrase “Some strange thing.”

Like much of Wylie’s poetic output, “Atavism” is a sonnet, but it is unlike most of her other work. After that threateningly enigmatic first line, we’re given a description of another pond—a happier, brighter rendering that one might expect to find in a Norman Rockwell painting. But then suddenly, in the middle of that fourth line, everything stops again, as if we’re hearing the creak of a resurrected villain coming up the stairs—“but the one beyond.” The dread couldn’t even wait politely until the end of the line. Caesuras do things to stories—and to readers, even readers too young to know the term.

Wylie connects her geographic unease to an atavistic dread, as if the landscape itself would remember and still hold a grudge after a century and a half away. Amid the many listless colors lies the primal feeling of being watched through the trees. “A silent paddle moves below the water” conjures an image of a ghostly indigenous figure before the final devastating couplet: “A sliding shape has stirred them like a breath; / Tall plumes surmount a painted mask of death.” Are readers meant to take this as a dangerously tired cliché of the mysteriously malignant American Indian? Or is it signaling something more, the recognition of a buried history? 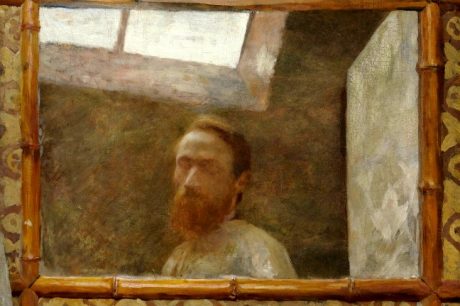 Poetry in Times of Crisis

Somes Pond and Somesville, Maine (where Wylie had summered for a couple seasons), are both named after Abraham and Hannah Somes, the island’s first nonindigenous settlers. They, of course, are not the land’s first inhabitants, despite how far beneath the pond a cultural history buries the silenced paddle. Though not overtly spelled out, this “dark history” of colonial expansion—the violent shift from the rules of one world to those of another—is suggested by Wylie’s poem, which seems to insist that any sense of geographic placidity is just a new cultural mask. Wylie’s work always aligned with the atavistic side of modernist poetry—the “it” of Pound’s “make it new”; she shows how the deeper sounds of a tradition, like a nation’s graver history, can always be stirred again. There is something here akin to William Carlos Williams’s “pure products of America”—the ones who go crazy because of a very different, very hidden, atavistic sense of a cultural geography.

Wylie loved the clip-clop of the final echoing couplet: even when she was experimenting with the Italian sonnet in her later work, she bucked convention by putting that couplet to use. Breath/death—although not a highly original poetic rhyme—was, at least for one child reader, unforgettable. Couple that with her exact and exacting iambic meter, and you have a poem that will lie dormant in a kid’s imagination for years. Even now, I can hear the echoes of her “Atavism,” like all great poems, still tracking me, turning where I turn.