B-Sides: Erskine Childers’s “The Riddle of the Sands”
Ever since James Cook nearly wrecked his ship on the Great Barrier Reef in 1770 ... 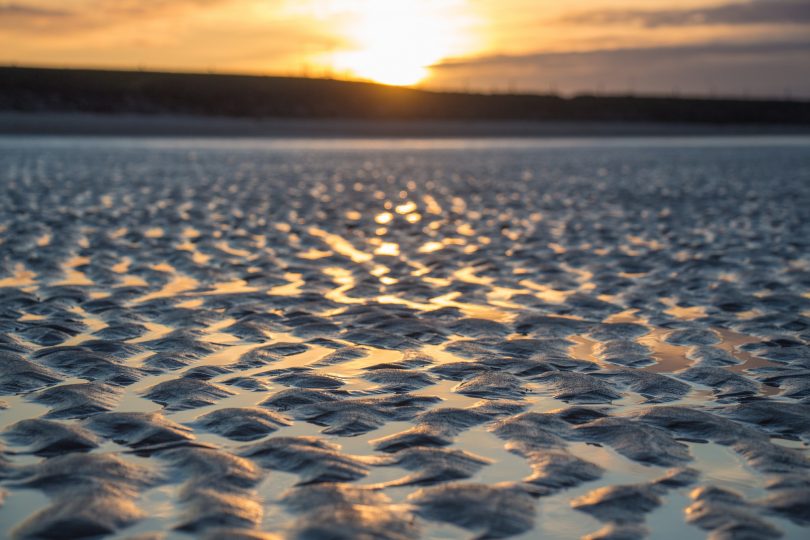 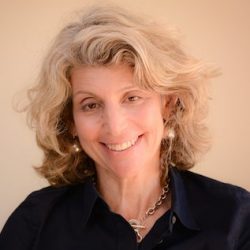 Ever since James Cook nearly wrecked his ship on the Great Barrier Reef in 1770, European publics have turned to South Sea cays and atolls when they craved adventures in the shallows. This environmental Orientalism has left the drab, sulfurous North Atlantic marshes and mudflats a distant, dismal-seeming second. Yet intertidal lowlands also make rich artistic terrain. Perhaps the most tantalizing and lyrical exploration of those desolate spaces was penned by Erskine Childers, a British civil servant and soldier whose intensifying engagement with Irish nationalism led to his execution in 1922.

His only novel, The Riddle of the Sands: A Record of Secret Service, originally published in 1903, is a top-drawer spy adventure. Yet it is also the travelogue of a bourgeois vacation gone terribly awry. And in sharp contrast to later examples of the genre (Thomas Mann’s Death in Venice, Paul Bowles’s The Sheltering Sky), its tale of erroneous escapism devolves not into existential crisis but into global political intrigue.

The novel begins when a slightly Dr. Watson–like young Englishman, Carruthers, is invited on a duck hunt by Davies, an obscure Oxford acquaintance. Of their destination, the sand banks and shallows of the Wadden Sea (that is, the Frisian Islands and the intertidal areas of the North Sea off Denmark, Holland, and Germany), Carruthers at first has nothing more to say than, “They look rather desolate.” He has to replace his fantasies of relaxing on “orderly, snowy decks and basket chairs under the awning aft” with the reality of “roughing it in a shabby little yacht, utterly out of my element,” with a companion who seems “a tiresome enigma.”

As Davies initiates Carruthers into the Wadden Sea’s tortuous channels and tidal shallows, Carruthers begins to realize they are tracking momentous quarry. Why was Davies’s kedge, the Dulcibella, almost lured to destruction upon the East Hohenhörn sands? Davies comes to suspect that the mysterious Herr Dollmann, who had led him astray, is an Englishman turned German spy. At the novel’s beginning, Carruthers casually mentions he spent time in France and Germany following studies at Oxford; lo and behold, Davies has invited him along precisely because of the knowledge acquired on that German sojourn.

In a chase after Dollmann, Carruthers and Davies feel their way through what Carruthers first calls a “desert of sand,” where, Davies exalts, “you can explore for days without seeing a soul.” The novel includes factual sea charts to orient readers in the labyrinth of intertidal flats, marshes, and dunes that the protagonists crisscross over the novel’s chapters. One of them is marked with a fictional location: where the Dulcibella was stranded, shown here below. 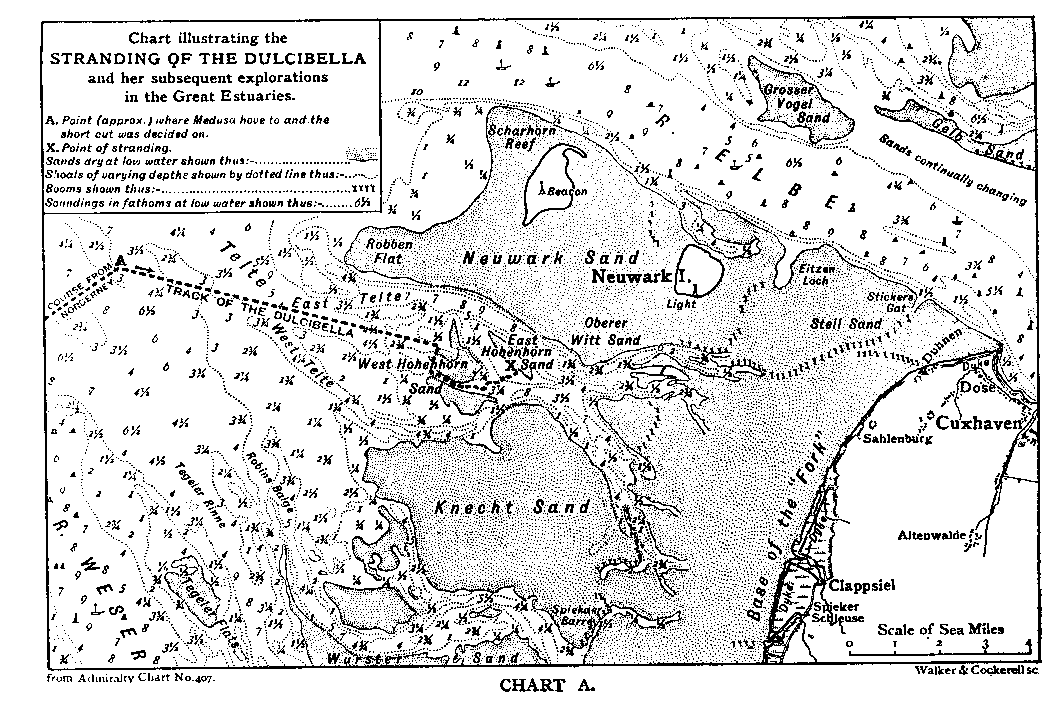 The charts certainly orient the characters’ convoluted navigations; however, their importance as a plot guide soon falls away. What matters far more is the conviction that the sands abstracted on the charts are an opportunity for entrancing description and narrative enigma, worthy of readerly note. Like Mark Twain’s Life on the Mississippi, The Riddle of the Sands was penned by a writer fascinated by the ephemeral conditions occurring at the meeting of water and land—a zone of practical danger, keen nature knowledge, and poetry, all at once.

The hunt to find Dollmann and to discover his motives is no more important to the novel’s allure than the picture Childers paints of this intoxicatingly mutable sandscape. In place of a sterile desert, Carruthers begins to perceive colors that “varied from light fawn, where the highest levels had dried in the wind, to brown or deep violet, where it was still wet, and slate-grey where patches of mud soiled its clean bosom. Here and there were pools of water, smitten into ripples by the impotent wind; here and there it was speckled by shells and seaweed.” The nuances of the ebbing and flooding tide are enhanced by the mystery of the capricious, shifting autumnal fogs. Sometimes the “fog” is “silent, clammy, nothing visible.” At other times it shrouds the landscape in a ghostly mood. When “a blanket of white fog” rolls in and Carruthers must guide Davies back “with a foghorn,” the device’s “music roused hosts of sea birds from the surrounding flats and brought them wheeling and complaining round us, a weird invisible chorus to my mournful solo.”

The enigma unraveled in The Riddle of the Sands is tucked away in “a quantity of insignificant streams and tidal outlets.” There the German navy is hard at work building an “armada” of barges “capable of flinging themselves on a correspondingly obscure and therefore unexpected portion of” Britain’s coast.  At the novel’s climax, Carruthers inadvertently participates in a rehearsal for this invasion when he stows away on one such German vessel. A naval arms race between Britain and Germany was in fact occurring as Childers wrote The Riddle of the Sands. Its author believed what American Alfred Thayer Mahan asserted in The Influence of Sea Power upon History, 1660–1783 (1890): who controls the seas, controls the globe. As Davies puts it, Germany is “our great trade rival of the present, our great naval rival of the future … an ever more formidable factor in the future of our delicate network of empire.”

English readers hearkened to the novel’s call to arms. Legend has it that Winston Churchill gave the book credit for spurring the Admiralty to build naval bases on the North Sea, such as at Scapa Flow in the Orkney Islands, in 1904. The importance of the North Sea in Britain’s two subsequent wars with Germany is history. When looking for a place to hide during the stowaway episode, Carruthers remarks pointedly on the absence of an apple-barrel such as used by Jim in Treasure Island. Lest his tale of littoral sleuthing be relegated to adventure storybook, Childers underscores the world-historical importance of his novel’s tussles in the shallows.

Davies and Carruthers fear national invasion; today, however, simmering international conflict recalls Childers’s insistence on the geopolitical consequence of seemingly insignificant shoals and sands. The current Spratly Island dispute in the South China Sea, for example, was inflamed when China started building up remote reefs into islands, starting in 2013. With maritime features transformed into land, China is extending territorial claims over one of the most commercially valuable waterways of the globe, where trillions of dollars of freight pass every year. The dispute continues to escalate, implicating mercantile transport and involving Vietnam, the Philippines, Taiwan, and Malaysia, as well as other global sea powers like the United States, although it does not often make our front-page news.

The Riddle of the Sands also accrues new meaning in the Anthropocene era. Childers created his fictional world from a resource now rapidly disappearing due to the building boom around the world, in one of the present moment’s least discussed ecological depletions.1 Concrete requires sea sand—desert sand is too fine for such use. As a recent Economist article notes, sand dredging “causes pollution and harms local biodiversity. Thinning coastlines affect beaches’ capacity to absorb stormy weather.”2

A maxim of activism is that to care about an issue, people must be able to connect to it emotionally. As The Riddle of the Sands brings to granular life the environment of Davies and Carruthers’ treacherous navigations, it may draw the attention of today’s readers to a precious—and fragile—planetary resource.

Featured image: On the Mudflats of the Mouth of the River Elbe in Otterndorf, Germany (2016). Photograph by Alexander Fink / Flickr 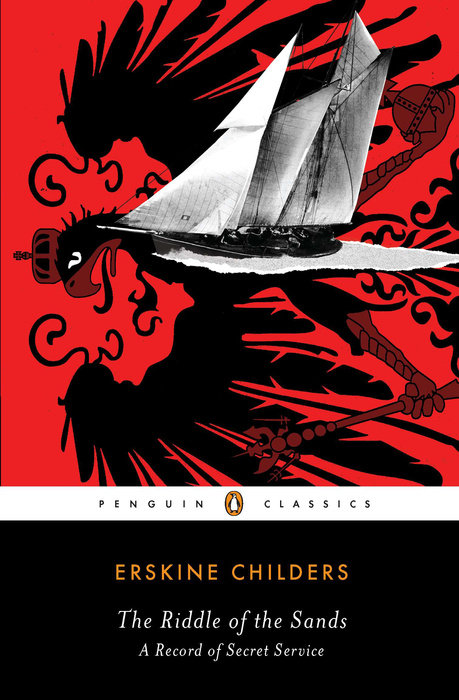 The Riddle of the Sands: A Record of Secret Service