B-Sides: Joe Brainard’s “I Remember”
John Ashbery said he was nice—“nice as a person and nice as an artist.” I think it’s fair to say that we don’t have a rich critical vocabulary for nice artists. (And how ... 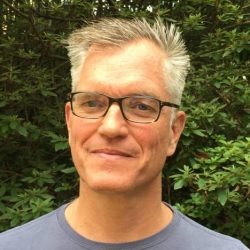 John Ashbery said he was nice—“nice as a person and nice as an artist.” I think it’s fair to say that we don’t have a rich critical vocabulary for nice artists. (And how many are there?) Yet, everyone agrees that Joe Brainard was one. There seems to have been a magnetism in his niceness, so many people came to love him.

Brainard was a collagist, painter, illustrator, and poet. He was part of the New York School, a group of friends who came of age in the ’50s and ’60s, poets and artists eager to capture the everyday, without betraying it into high seriousness. In his prose, Brainard was a collector of stray moments, with a knack for conveying what Virginia Woolf called “the suggestiveness of reality.”

I was saying to Bob the other night how easy it would be to live in Bolinas if you were madly in love (a few minutes of silence while we could tell that we were both thinking the same thing) as one of us said “But, of course that could be said about just about any place.” Nice when that happens.

Much of what is most winning about Brainard’s writing is in these two sentences: his innocence, his inwardness, his easy-going attention, his ungainly grace, his skew humor, his power of evocation, his conversational voice and conversational silence. Because he was undefended and open to being seen, he was open to seeing; moments stuck to him like burrs stick to your clothes as you cross a field. He used parentheses generously to include the intricacies of his thought, and seems never to have used a semicolon (too formal).

Dinner tonight at “The Gibson House.” (Steak). And too much wine. (Depending on how you look at it.)

He loved things, but he loved people more. His sentences always seem ready to turn from the third person to the second. And sometimes they do:

Poem by Anne about my show today. So extravagant! (And I love you for it.)

When I first read these three passages in Brainard’s Collected Writings, I assumed they were private writings, only to discover that they had been published in his book Bolinas Journal. After that, I repeatedly found myself flipping to the endnotes to find out whether I was reading a public, published work or a private, unpublished one, but there’s little difference, really.

Although his visual art belongs to the permanent collections of various museums—MoMA, the Met, the Whitney—he’s now best known for his book I Remember, a loose-limbed volume of memories. Brainard had the idea for the book one day while sunbathing in Vermont. “I wrote a bit on a new thing I am writing called ‘I Remember,’” he told his friend, the poet James Schuyler. “It’s just a collection of things I remember.” Brainard would write each day and show his work to Schuyler at night. “He would tell me how terrific it was, which was all I needed for the next day,” he later remarked in an interview (with Tim Dlugos, included in The Collected Writings). Reading the book, you can feel that it was written within friendship’s deep shelter, where the most important questions have already been answered, and everything is of interest. He doesn’t expect his readers to be mean, and so we aren’t.

Granted the license of friendship, Brainard is free to be oblique and partial. Most of his memories have one brief act:

I remember how disappointing going to bed with one of the most beautiful boys I have ever seen was. …

I remember catching myself with an expression on my face that doesn’t relate to what’s going on anymore.

Others seem to have two or more:

I remember wanting to sleep out in the backyard and being kidded about how I wouldn’t last the night and sleeping outside and not lasting the night. …

I remember, when a fart invades a room, trying to look like I didn’t do it, even if, indeed, I didn’t. …

I remember, at parties, after you’ve said all you can think of to say to a person—but there you both stand. …

I remember, after a lot of necking, how untheatrical the act of getting undressed can sometimes be.

But all of them meditate on the ways language accommodates the varieties of remembered experience. Some live in the past: “I remember red rubber coin purses that opened like a pair of lips, with a squeeze. …” Others measure the distance between past and present: “I remember early sexual experiences and rubbery knees. I’m sure sex is better now but I do miss rubbery knees.” Others reflect on time’s strange passage: “I remember getting a car door slammed on my finger once, and how long it took for the pain to come.” Still others float uncertainly between past and present: “I remember over-tipping. And I still do.” Collected together, they suspend time, leaving his memories gently vibrating, still.

I Remember is “about everybody else as much as it is about me,” he wrote his friend Anne Waldman. “And that pleases me. I mean, I feel like I am everybody. And it’s a nice feeling. It won’t last. But I am enjoying it while I can.” Part of the pleasure in reading the book, of course, comes in finding your own memories shared by someone else (nice when that happens). Another part of the pleasure comes from listening for the harmonics of the thing, the way that the memories work together and apart, never giving you everything but always giving you something.

I remember finding things in the drawer I wasn’t supposed to see, smothered in nylons.

I remember the olive green velvet lining of my mother’s olive green “leather” jewelry box, with fold-out trays. When alone in the house, I loved going through it, examining each piece carefully, trying to pick out my favorites. And sometimes, trying on something, but mostly I just liked to look.

I remember learning very early in life the art of putting back everything exactly the way it was.

Perhaps, you think, his work as a collagist began here. Perhaps growing up, for him, meant learning to put things where they don’t belong. But you can’t know. And the next paragraph brings a new topic. The result is a book of immense generosity, in which anything could be included:

I remember daydreams of going with an absolutely knock-out girl, and impressing all my friends no end.

I remember wondering how one would go about putting on a rubber gracefully, in the given situation. …

I remember a little boy who said it was more fun to pee together than alone, and so we did, and so it was. …

I remember rocks you pick up outside that, once inside, you wonder why.

A large collection of small things, I Remember is neither large nor small; it’s lengthless. Brainard published it, and then wrote I Remember More, followed by More I Remember More, and then other people continued to develop the form in their own way. Kenneth Koch used it to teach kids to write poetry. Georges Perec’s autobiographical Je me souviens (I Remember) is dedicated to Brainard; it has blank pages at the end for readers to add their own memories.

Though I Remember contains much, its achievement, or one of them, lies in its attitude toward all it can’t contain. In his elegy for Brainard, who died of AIDS-related pneumonia, in 1994, the poet Frank Bidart writes of his friend’s “purity and / sweetness self-gathered”:

you had somehow erased within you not only

meanness, but anger, the desire to punish

the universe for everything

In the ’80s, when he was in his 40s, Brainard gradually stopped publishing his writing and making art. Friends and critics have often wondered why. But the extraordinary thing is how little art there was to begin with—how close his art was to living. Brainard seems to me most like his friend Schuyler. Both are diarists, taking apparently unremarkable details of daily life and polishing them just a bit. It is as if life has taken the smallest step into art. We’re used to the kind of trompe l’oeil in which a painting looks lifelike: birds fly down to peck at the grapes. But Brainard reminds us that trompe l’oeil can go the other direction, too: I see two women walking down the street who seem to dance; across the way, a boy stands contrapposto.

Mean, awkward, fond, gentle, equable, comforting: this seems the right, modest register to use in talking about nice art. What’s remarkable, then, is how, when you’re in the right mood, Brainard’s writing can seem to give you all you need. His Collected Writings closes with a paragraph found in his papers after he died. Brainard titled it “January 13th,” and it ends this way:

Outside my window snow is falling down, against a translucent sky of deep lavender, with a touch of orange, zig-zagged along the bottom into a silhouette of black buildings. (The icebox clicks off, and shudders.) And it’s as simple as this, what I want to tell you about: if perhaps not much, everything. Painting the moment for you tonight. 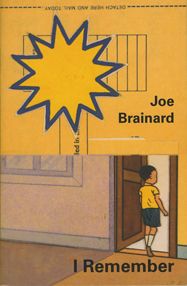