B-Sides: Mary Borden’s “The Forbidden Zone”
Mary Borden’s taut masterpiece has long been overshadowed by the other Great War books of 1928–29 (All Quiet on the Western Front, A Farewell to Arms ... 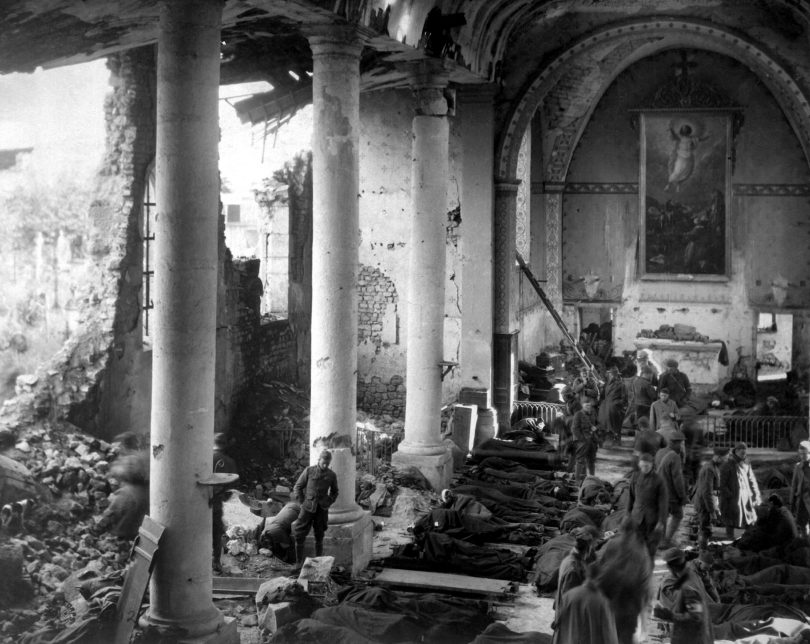 Mary Borden’s taut masterpiece has long been overshadowed by the other Great War books of 1928–29 (All Quiet on the Western Front, A Farewell to Arms, Good-bye to All That) and by the 1922 war novels of Edith Wharton (A Son at the Front) and Willa Cather (One of Ours). To understand why, consider how the narrator of The Forbidden Zone’s opening sketch, “Belgium,” calls the reader to attention.

You see those men, lolling in the doorways—uncouth, disheveled, dirty? They are soldiers. You can read on their heavy jowls, in their stupefied, patient, hopeless eyes, how boring it is to be a hero.

With the anonymity of “those men,” The Forbidden Zone resists the comforts of identification with developed characters. To the generals who command them, these men are cannon fodder. Treating them any differently on the page would falsify frontline experience. The Forbidden Zone’s relative neglect over the last nine decades signals something about readers’ unwillingness to confront the private soldier’s disposability.

Borden wrote most of The Forbidden Zone between 1914 and 1918, but she only published it after the immediate success of All Quiet on the Western Front, which she believed would “strip the glamour from modern warfare.”1 Erich Maria Remarque’s 1929 novel, though, does not convey the alienation and dehumanization of the world’s first fully industrialized war as thoroughly as The Forbidden Zone does. Borden’s writing bears the formal imprint of mechanized violence and mass destruction. From the lacerated ground, airplanes look like dots in the sky, while soldiers and civilians are similarly microscopic when glimpsed from the air.

Divided into two parts, “The North” and “The Somme—Hospital Sketches,” The Forbidden Zone contains 17 stories and no unified narrative. (The original publication included a short final section of poems, which recent editions have wisely omitted.) The first seven pieces are marked by dizzying shifts in perspective that, among other effects, mimic the experiences of two of the war’s signature technologies: trenches and airplanes. 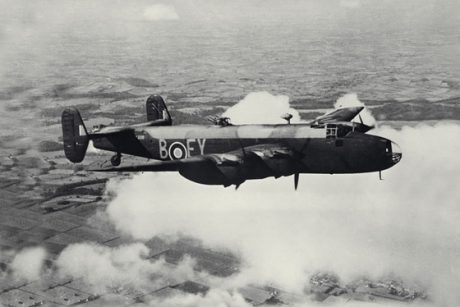 The War in the Air

We begin in the mud, where “there’s no frontier, just a bleeding edge.” A narrator explains that this is what is left of Belgium—“Come, I’ll show you”—but the first-person disappears as quickly as it arrived. The second story, “Bombardment,” opens at the break of day memorialized in trench poetry for the sublimity of nature and danger of battle renewed. In the stillness of dawn, “a speck appeared in the great immensity. It was an aeroplane.” First seen from below, “superbly poised now in the spotless sky,” the plane abruptly becomes the observer, as “a cluster of houses collapsed, while a roar burst from the wounded earth.” Here, sight arrives before sound. From above, the plane sees “signs of terror and bewilderment … in the human ant hill beneath it.” But before we settle into the viewpoint of Borden’s mechanical protagonist, the plane again becomes a “speck in the infinite sky, then nothing,” while “the town was left in convulsions.”

Even when the perspective shifts from sky to ground, no individual characters are distinguishable. “The Regiment” opens with clouds in a summer sky, “superb castles of white vapour, floating towards a land called No Man’s Land,” and with a passing airplane “bent on mysterious adventure.” From an uncertain height, we glimpse a “moving mass of men” marching with “the steady jolting gait of weary animals.” Suddenly, the narrator stands among them: “I saw in their eyes that they were men.”

Borden forecloses any move toward individuation with the men’s arrival in a town square, where they are met by a group of officers and addressed by a general. Unlike the regiment, Borden’s officers seemingly possess “variety”: “No one was like another one. Not one had gestures like another one. Not one had clothes like another one. Certainly they were individuals.” Yet these officers’ individuality is merely asserted, not developed, and the story remains at the level of groups and types. A bugle heralds the arrival of what the regiment collectively sees as “a beautiful animal dressed as a nun and branded with a red cross” and the town collectively sees as a “white peacock”: the first of many nurses in Borden’s stories.

It is nurses, not soldiers, who bring a degree of intimacy to The Forbidden Zone. The first-person narrator of “Moonlight,” awaiting her midnight shift, is lulled toward sleep by “the soft concussion of distant shells bursting from the mouths of cannon” but kept awake by the “little whimpering voice of a man who is going to die in an hour or two.” The sounds and smells of war are naturalized by the inverted world of the field hospital. “I could sleep with the familiar damp smell of blood on my apron,” she explains, “but the terrible scent of the new-mown hay disturbs me.” A fever dream animating a rich psychic landscape, “Moonlight” is a relief to read after so many stories of distancing and alienation. Still, even in “Moonlight,” and in the two stories that follow, each about a wounded soldier brought to the hospital to die, Borden’s narrators could be any nurses anywhere along the Belgian front.

The Book’s relative neglect over the last nine decades signals something about readers’ unwillingness to confront the private soldier’s disposability.

Not until the ninth story, “Enfant de Malheur,” do readers learn some names: Pim the nurse and Guerin the priest. The protagonist stays nameless, though. “His name was tattooed on his arm,” the narrator informs us in the story’s opening line, but she doesn’t reveal it. He is one of a group of Parisian convicts serving life sentences who have been drafted into the colonial army to fight in the trenches. The story recounts his terror at the brink of death. He clings to his awareness of his “unutterable vileness” against Guerin’s insistent prayers. When he finally offers his confession, “pouring out all his dark, secret, haunting memories into Guerin’s ears and sobbing with relief,” the narrator realizes that she will “never again in this world see anything so mysterious.”

Borden has finally invited us into the struggles of a distinctive character (still a type—“these assassins, thieves, pimps and traffickers in drugs,” whose skulls, ears, foreheads, jaws, and mouths betray a genetic proclivity to criminality); the narrator explicitly seeks to preserve that character from the anonymity of mass death. “‘No one, no one else must die tonight,’ I kept saying to myself. ‘There is only one death here tonight.’” Arrayed against this yearning for a unique, memorable death are the wooden crosses in the hospital cemetery marking the graves of past patients. “I could not remember them,” the narrator grieves. “They had no names, no faces in my memory.”

The Forbidden Zone’s nurses express a combination of anguish and satisfaction that no doubt bears some relationship to the author’s own war experiences. While she was pregnant with her third child, Borden signed up as a nurse with the London Committee of the French Red Cross. At the beginning of 1915—as Borden’s biographer Jane Conway recounts—she set off for Belgium, leaving young children and an unhappy marriage, to found her own field hospital on the road between Dunkirk and Ypres. The hospital’s 5 percent mortality rate was the best of the entire front that year; according to Conway, wounded men “pleaded to be sent there.” For her service during the Battle of the Somme, Borden became the first American woman to be awarded the Croix de Guerre. She dedicated her book “to the poilus who passed through our hands during the war,” but she insisted it was “not meant for them.” To these soldiers and the nurses who treated them, she confessed, her writing could at best offer a “blurred” and “softened” version of the war’s “bare horror.”

Pained by the volume and pace of the mortally wounded becoming the forgotten dead, nurses in The Forbidden Zone experience an ecstatic sense of belonging—“bliss”—through shared suffering. In “Blind,” when a young soldier crying for his mother dies with his head on a nurse’s breast, the nurse wonders if he thought “the arms holding him when he jerked back and died belonged to some woman I had never seen, some woman waiting somewhere for news of him in some village, somewhere in France.” 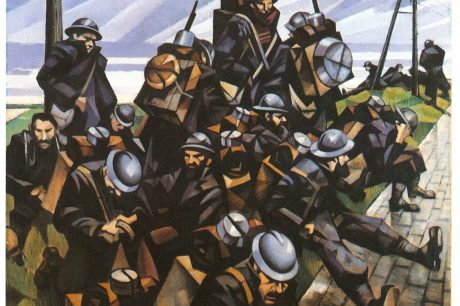 The Art of (Not Forgetting) War

Recalling “those men” at the beginning of the book, “some woman”—in the mind of an unnamed nurse imagining the dying thoughts of an anonymous soldier—belies the scene’s sentimental trappings. In hindsight, the narrator confesses that “because our mortality at the end of three months was only nineteen per cent, not thirty, well it was the most beautiful place in the world to me. … I think of it now. I only knew it then, and was happy. Yes, I was happy there.” But this happiness is built on forgetting, and the experience of reading The Forbidden Zone mirrors that dissociation.

At the end of “Blind,” after the maternal tableau, the narrator hears the cries of the eponymous blind soldier. He fears that she has forgotten him in the confusion of the ward—and she has—but she lies and assures him otherwise. When he smiles, she flees, sobbing. “I was awake now, and I seemed to be breaking to pieces.” The Forbidden Zone is similarly fractured, and Borden refuses us the comfort of stitching the pieces together or holding on for long to any of the nurses and soldiers who populate its pages. The kind of warfare Borden documents is over a century old. Yet her experiments with anonymity and interchangeability—unlike more canonical modernist forays into interiority and individuation—make the Great War seem new and razor-sharp.

Featured image: This shattered church located in the ruins of Neuvilly furnished a temporary shelter for American wounded being treated by the 110th Sanitary Train, 4th Ambulance Corps, France, September 20, 1918. Photograph by Sgt. J. A. Marshall / US Army Reserve 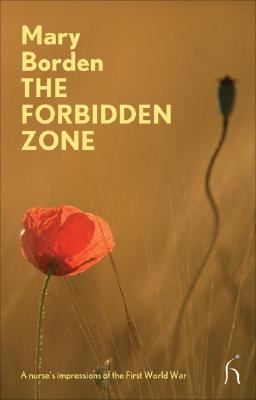 The Forbidden Zone: A Nurse’s Impressions of the First World War