Baggy Monsters
In 2012, the New Yorker hosted a roundtable discussion on the question “Is Television the New Cinema?” Two years later, the New York Times asked, “Are the New ‘Golden Age’ TV Shows the New Novels?” ... 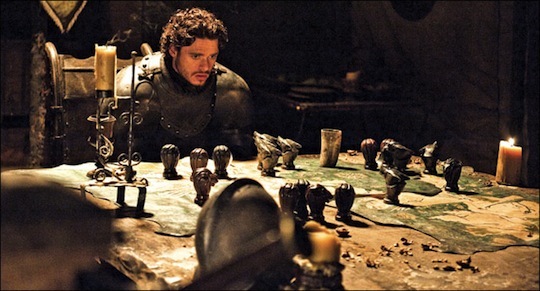 In 2012, the New Yorker hosted a roundtable discussion on the question “Is Television the New Cinema?” Two years later, the New York Times asked, “Are the New ‘Golden Age’ TV Shows the New Novels?” Apparently, television in its contemporary flourishing cannot be just television. One show often cited for its bigger-than-television ambitions is HBO’s Game of Thrones, adapted from the sprawling fantasy book series A Song of Ice and Fire, by George R. R. Martin, and now also reportedly in the works for a big-screen finale. How apt, the Guardian reports, because Game of Thrones “cleaves closer to the world of cinema than traditional TV,” its approach already being ripped “straight out of Hollywood’s big budget songbook.”

Reading the Game of Thrones novels, however, is like nothing so much as watching television—plain old television. It is perhaps not surprising that Martin’s writing credits include the steamy CBS series Beauty and the Beast from the 1980s. Superficially, at least, the sex scenes and backstabbing and incest and power grabs of the novels would be at home on any daytime soap opera.

But what primarily makes the Game of Thrones books televisual rather than novelistic is their segmented, discontinuous organization of space and spaces. The fantasy world of Westeros is assembled piecemeal, as a series of backdrops rather than a traversable, expansive depth. Martin has been deservedly praised for his formidable accomplishment in “world-building,” necessitating appendices of characters and places running to 54 pages in the most recent volume. If we focus instead, however, on “world-knowing,” on how the reader makes her way along the kingsroad, through Dreadforts and Bloody Gates, we see that Martin builds his world choppily, in disparate snatches.

To convey the vast panorama of Westeros, Martin has lighted upon an unusually cramped literary device. Each chapter in the Game of Thrones novels is headed by a character’s name: Bran, Tyrion, Davos, Daenerys. But this is not Light in August. Literary critics as eminent as Daniel Mendelsohn have written of Martin’s novels that “each chapter is narrated by a different character,” but in fact the narration is always third-person, its scope merely leashed to the perspective and thoughts of one focal character at a time. When this strategy works, it produces a vertiginous collision of many catastrophes all falling due at once. When it does not work, the effect is like having to “check in” on the preliminary pawn exchanges of several simultaneous chess games, making the rounds through every incremental nudge of set-up.

One of the series’ emblematic locations is the Wall, an immense marvel of primitive engineering, and an important pole in the symbolic oppositions Martin sets up: north of the Wall, all is lawless inhumanity; south of the Wall, the roulette wheel of sovereignty determines everything. But although there is a great deal of lead-up to our first sight of this staggering fortification, the reader never gets a first glimpse of the Wall. Although we accompany Tyrion Lannister and Jon Snow on a lengthy ride north, by the time we actually see the Wall, the characters have now already been living in its shadow for many weeks, so that Jon could “almost forget that it was there.”

Jon Snow’s (and the reader’s) first encounter with the Wall—the sublime edifice that is also the emblem of his destiny—is a casualty of this technique. Martin’s intention is to get Jon to the Wall, to have him be there, interacting with the hierarchy of the Night’s Watch, anxiously anticipating an incursion from the North. Martin has no interest in getting him there, “into position,” so to speak. Such maneuvers happen offstage, while the reader is engrossed in a chapter about a character who is hundreds of miles away.

The effect for the reader is precisely the situation of all television programs: the different sets don’t connect to each other, but are non-contiguous, discrete environments scattered over a studio’s lot. The viewer of a traditional three-camera sitcom like Seinfeld knows very well that if Jerry wants to cross the hall into Kramer’s apartment, the cameras can’t follow him. Even on the single-camera HBO version of Game of Thrones, King’s Landing is a maze of discontinuous interior sets. Because it is television, there are no long takes that follow the characters from, say, the throne room to the city’s outer defenses. When King’s Landing is occasionally embattled, one cannot say which direction the attack is coming from. We cannot expect the enemy at any moment to burst through the door, since we don’t know which of the doors this would be.1

Martin’s novels work not by linking up spaces, but by a principle of immersion.

Take by contrast the adaptation of the science-fiction television show Firefly for the movie Serenity: the very first sequence of the film is a bravura tracking shot linking up all of the show’s disconnected sets, requiring a massive unified set that allowed viewers to see for the first time the characters crossing from the command bridge to the engine room. It is as if this dynamic, orienting shot were not only introducing first-time viewers to the backstory and environment of the television show, but were also announcing that this camera work was announcing a “graduation” to the cinematic big-time.

The Game of Thrones novels, by their very structure, eschew the literary equivalents of tracking shots that we find in more cinematic writers. Perhaps the greatest literary tracking shot takes place in Edgar Allan Poe’s “The Masque of the Red Death.” As the narrator surveys and populates the sequence of colored rooms, the rooms’ layout and embellishment unfolds in two economic movements. First, we move through the sharp angles, closed corridors, and vividly colored suites, whirling with hallucinatory frenzy in a descriptive sequence. Then, at the end of the story, we move through the seven rooms again, following Poe’s plague-bearing phantasm as it retraces the same route, spreading death and panic. This sequence is fully the equivalent of the tracking shots that Stanley Kubrick orchestrates to map the floor plan of the Overlook Hotel in The Shining or the network of military trenches in Paths of Glory.

Martin’s novels work not by linking up spaces, but by a principle of immersion—that is, through familiarity with the characters and their surroundings. Arguably, the long span and recurring cast possible on television lend themselves to such immersion more than cinema does. In a two-hour film, a character is largely defined by the narrow demands made upon her by a single dramatic situation, whether this means keeping a bus above 50 mph or saving the Jews working at a munitions plant. But in a television show, over the course of several seasons and multiple “arcs,” we see a character in many situations and responding in ways not dictated by the initial coordinates—a pattern that also holds for series fiction. 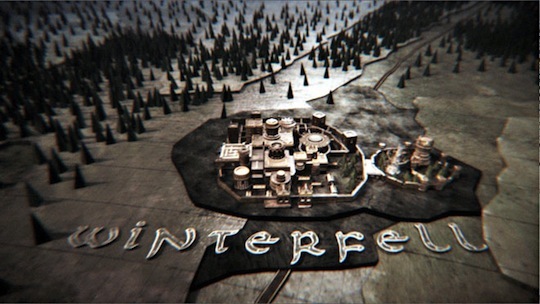 In the Game of Thrones novels, this familiarity is then all the more effectively undercut by Martin’s infamous tendency to kill off a beloved character unexpectedly. One drawback of this intermittent but prolonged and slowly deepening acquaintance is that the characters we shuttle between are themselves already immersed in the world. They are not engaged in “world-knowing.” Eddard Stark is not a newcomer to King’s Landing; he conquered it in the last war. Tyrion Lannister is not a wide-eyed naïf but a well-traveled cynic and consumer of historical volumes. Bran, the youngest character, is gifted with an all-seeing prophetic sight that can glimpse even the heart of the distant North. Even when following characters like Jon Snow, who is new to his environment, Martin tends to skip moments of arrival and acclimation.

Compare this to the classical novelistic approach of The Lord of the Rings. Its third volume, The Return of the King, opens with the provincial hobbit Pippin being conveyed by a night ride to the great fortress Minas Tirith. Wrapped in the cloak of the wizard Gandalf, unable to see, and dropping in and out of wakefulness, Pippin can construct only a patchy image of their journey. But then Gandalf observes with alarm that war beacons have been lit upon the mountains of the south. He proceeds to name an archipelago of peaks along which a blazon of fire is rushing, from Amon Dîn to the very borders of Rohan, thus filling in the outlines of their progress for both Pippin and the reader. When the two characters reach their destination, they must first pause to give an account of themselves to the guards and then traverse a preliminary boundary, still under construction as a defensive rampart, before passing through the official Seven Gates that lie ahead. Only at this point does a lengthy description of the tiered, enclosed architectural marvel of Minas Tirith unfold.

Pippin gazed in growing wonder at the great stone city, vaster and more splendid than anything that he had dreamed of; greater and stronger than Isengard, and far more beautiful. Yet it was in truth falling year by year into decay. … In every street they passed some great house or court over whose doors and arched gates were carved many fair letters of strange and ancient shapes: names Pippin guessed of great men and kindreds that had once dwelt there; and yet now they were silent.

The perspective in which Tolkien situates the reader couldn’t be simpler, or more effective. Pippin is an awed newcomer; nothing in his journey had prepared him for these wonders and yet he is a late arrival to a splendor that is already fragile and bygone.

In the Game of Thrones universe, however, Martin is not able to motivate descriptions or to set his landscapes in motion by showing us how a character perceives and engages with them. When Catelyn Stark arrives at King’s Landing early in the first novel, it is the reader’s first encounter with this key, contested site—but not Catelyn’s. Martin spends five paragraphs diagramming the city’s layout and bristling defenses, but during that time, the narrative eye drops Catelyn’s point of view in favor of a vast historical and geographical overview:

And above it all, frowning down from Aegon’s high hill, was the Red Keep, seven huge drum-towers crowned with iron ramparts, an immense grim barbican, vaulted halls and covered bridges, barracks and dungeons and granaries, massive curtain walls studded with archers’ nests, all fashioned of pale red stone. Aegon the Conqueror had commanded it built. His son Maegor the Cruel had seen it completed. Afterward he had taken the heads of every stonemason, woodworker, and builder who had labored on it. Only the blood of the dragon would ever know the secrets of the fortress the Dragonlords had built, he vowed.

Instead of orienting or disorienting the reader by moving her through space, Martin registers his environments as mere tableaux, backdrops plus voiceover. You can feel, as you read, the computer-generated establishing shot that will populate the shoreline with pseudo-Florentine architecture. Fifteen years before HBO’s adaptation of Game of Thrones, Martin was picturing Westeros with all the visual vocabulary of television—and all of its limitations.

A Game of Thrones

A Clash of Kings

A Storm of Swords

A Feast For Crows

A Dance With Dragons