Bergen, Norway: Discourse and Context
This is the latest installment of Public Streets, a biweekly urban observations series curated by Ellis Avery. This past spring I found myself in Bergen, Norway, undertaking an arts residency and ...

This past spring I found myself in Bergen, Norway, undertaking an arts residency and witnessing the intermingling of urban space, art, and politics in that remote coastal city. Whether looking out at the expanse of the harbor from my studio window or walking around the city attending art show openings, I was struck by the omnipresence of both the environment and the city’s artists. Bergen prioritizes art and the art world to an extent I’ve rarely seen. Expansive public dialogue is created by the galleries—their architecture and free-entry policy create movement between the general public and the rarefied elite—and by the artists’ choice of venues: often outdoor, nontraditional.

Dialogue of the political variety felt less available. Protest seemed rather less common than complacency. “In Bergen we grew up without social problems, or poverty. There was nothing to fight for,” says a character in Ane Hjort Guttu’s film Time Passes.

The same sense of the pristine that emanated from the mountains and the clean city streets seemed to infuse art spaces. Curators, artists, and audiences, by expressing ideas about what is and isn’t “necessary” art in this town, all seemed to be engaged in a cautious but earnest debate about the scale of the context in which Bergen’s art should be considered. 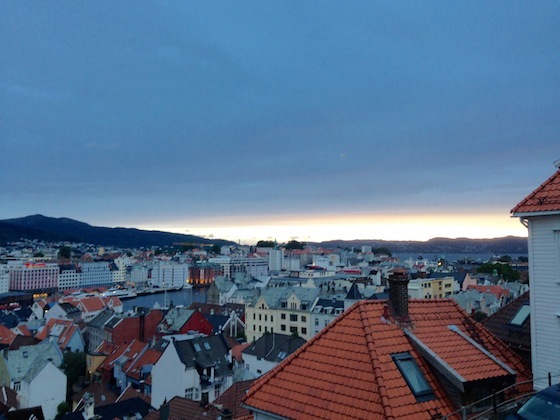 1. Two things to note. A: the light. B: the way the hue of the houses matches that of the sky and the landscape.

2. Unlike that of New York City, my permanent home, the urban architecture of Bergen is constructed to lead the eye and body outward. The environment’s presence, absence, accessibility, and visibility all shape the structure of houses, their window placement and size, how their doors open, where they sit on a mountainside. 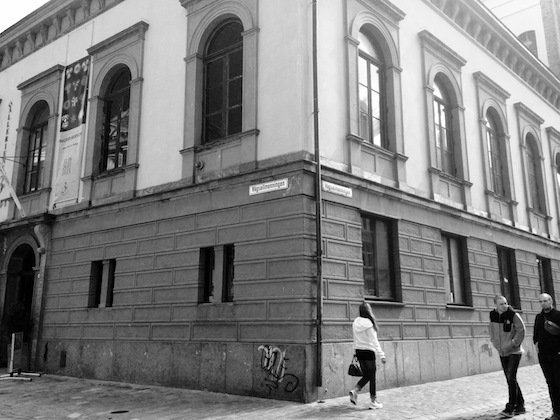 3. Walking through Bergen’s downtown immediately brings you to the Vågen: the quays. At Kraft Gallery, I gain free admission to see the work of recent graduates of Bergen’s Kunsthøgskolen—the art academy.

Two sculptures emphasize the gallery’s structure. In one, mud explodes out of an old, open bank vault, into which visitors are invited to walk, leaving footprints. The other sculpture is a horizontal clay extension of one of the gallery’s inner walls.

The dense, moist clay of both sculptures conjures temporality, the accumulation of detritus, entropy. The thick windowsills of the second sculpture, built meters out from the windowpane, call to mind Russian windowsills built like forts to stop the cold. I wonder if there are echoes in traditional arctic architecture. The power of outside elements is manifest visually.

But what’s not present? Any critique of the commercial past of this building and, in particular, its former use as a large bank. The economic question simply is not raised, despite the omnipresence of capital communicated by the stately structure’s marble interiors, its vaults upstairs and down. 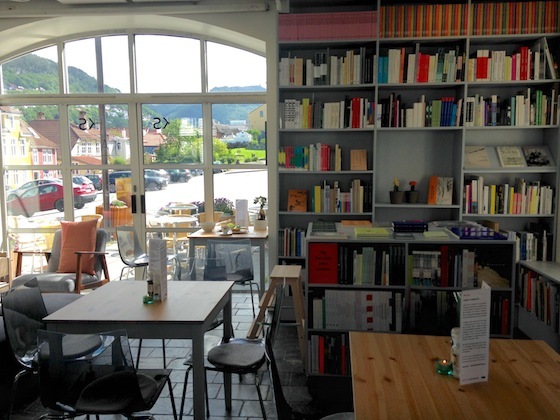 4. The public café/library space at the Hordaland Kunstsenter (HKS), the first artist-run art center in Norway, places equal weight on the external and internal. Light, visual stimulation, and, in summer, air, stream in from outside. 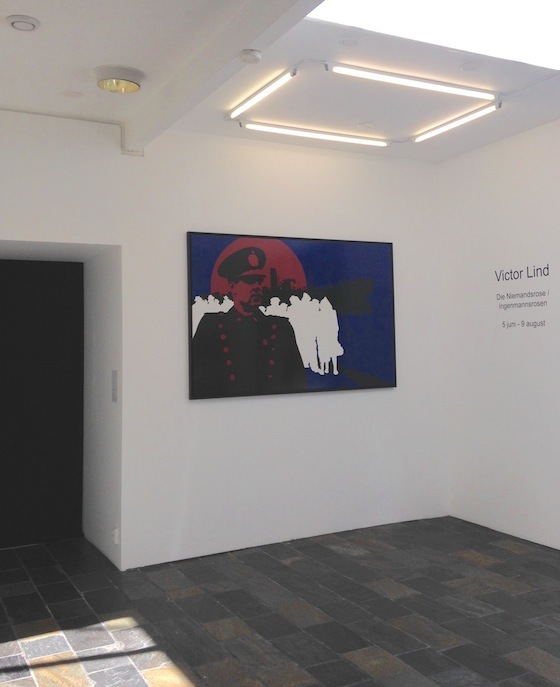 5. In one of HKS’s exhibition spaces, sunlight is carefully filtered through a skylight. The work I saw here over many weeks’ visits was minimalist, unapologetically straightforward, and sometimes gently, though intentionally, probing.

Victor Lind is one of Norway’s more political painters and sculptures. His most controversial work is the Knut Rød series, in which he questions the acquittal of a Norwegian police officer responsible for the handing over of more than five hundred Jewish people to SS troops during the Second World War. The “gray zone” of alleged moral ambiguity—to paraphrase Primo Levi—that surrounds Rød’s case provoked intense debate. Did he really betray Norwegians, given he also used his police post to support the Norwegian resistance? This gray zone is emblematic of the philosophical questioning that seems to surround cases of injustice in Norway. Interrogation of the self, selfhood, and ideas of nationalism and communalism all frame the debate, in direct contrast to the bludgeon-like right/wrong approach to both justice and to activism protesting its miscarriage that one witnesses in the US. 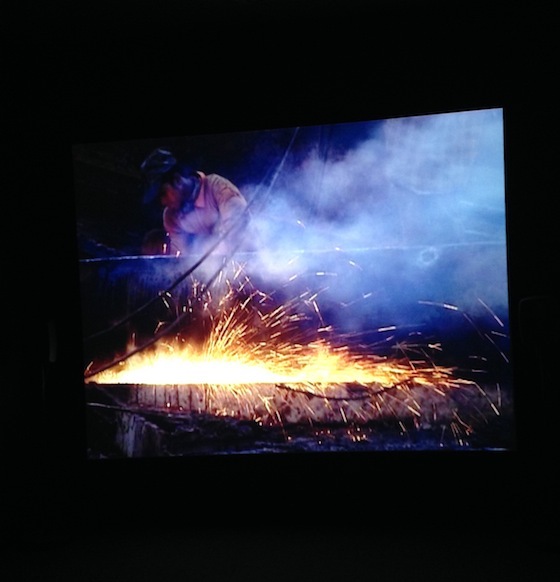 6. Above Kraft, yet another gallery, 3,14, has a lobby nook for free evenings of new music, experimental poetry, and drinkable wine. Inside, another bank vault shows films. Yasmine Kabir’s The Last Rites displays the conditions of the shipbreaking yards of Chittagong, Bangladesh. We watch scenes of exploited labor while we sit, Western, white, comfortable, in the vault. 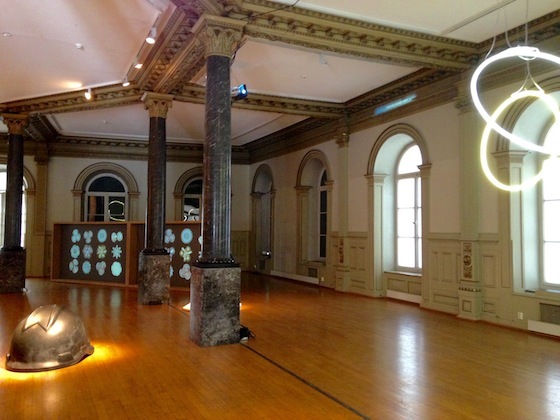 7. The main gallery space is cavernous and you feel the external environment less here than in other spaces of the city. As though in response, 3,14 makes a conscientious effort to feature artists whose work is in dialog with contemporary economics and environmental politics. Ingrid Berven’s work considers the context of Norway’s oil production in order to examine the way that capitalist consumption overemphasizes product and devalues labor. On the top right-hand side of this photograph note the ticking, digital meter projected above an arched window, reminiscent of New York’s Union Square methane emissions meter. While NYC’s statistics evoke terror—a countdown to environmental collapse—Berven’s display the number of barrels of oil extracted from Norwegian fields, counting up dollars in the bank. 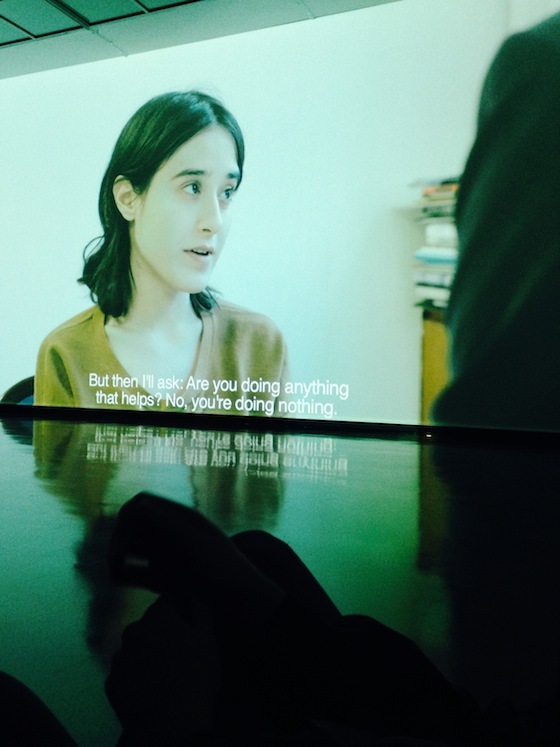 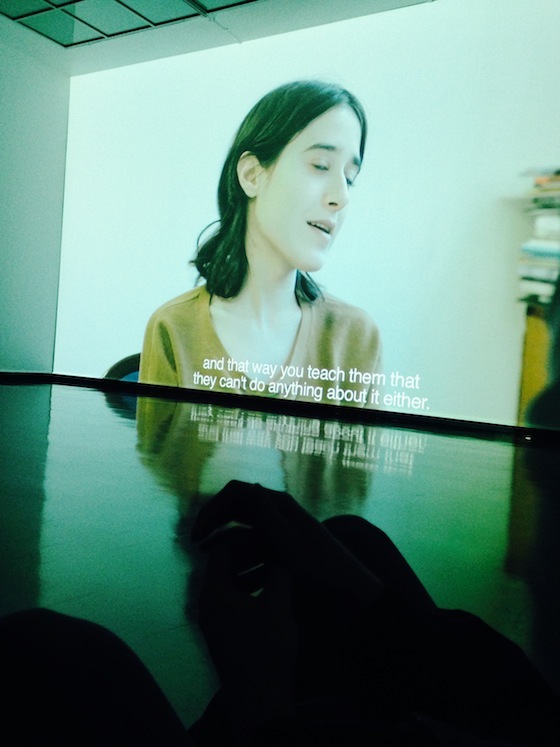 9. “And that way you teach them that they can’t do anything about it either.” 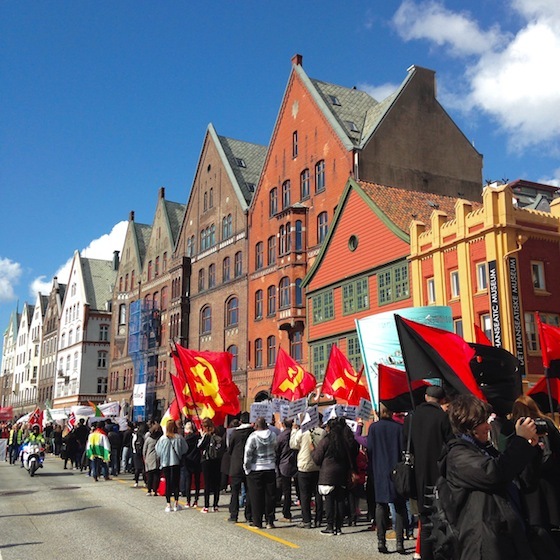 10. The May Day Parade—communistic, vocal, but extremely well ordered—passes back and forth along the Vågen. I glimpse an unexpectedly single-minded, black-and-white expression of Norwegian social politics. There is a theatrical aspect to this march: it is, I decide, after wandering behind it, a public performance of political action that has been rendered more theater than protest by its highly scripted and tightly controlled nature. The accompanying police and security detail are substantial. Protesters hand out red roses to the audience. It’s a spectacle of decorum, politeness, and nonviolence. 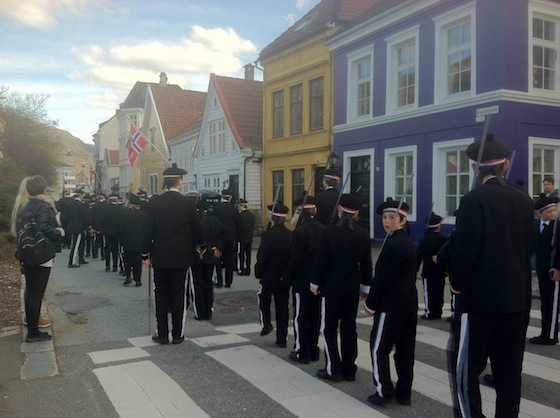 11. On Norwegian National Day, May 17, marching boys emerge as a reluctant band of folkloric performance artists. Designed by adults and parents, the march requires their unwitting children to enact a modern nation-state script, one more bellicose than that of May Day. This march predates their own lives, though not those of their great-great-grandparents. At about the same time that the national-identity-cementing kilt was concocted in Scotland in the 18th century, Norwegian national dress and marching bands were developed to foment Norway’s national pride. I feel alienated, nervously excited, strolling about in my non-Norwegian dress.

12. Subversion does emerge on this fervently nationalistic day: a brass band passes through the streets without a permit. I run out of the bar where I am drinking prosecco and watch the effects of the band’s rebellious refusal to rehearse or to march in line. Their performance—much more knowingly a performance than that of the suited marching boys—gradually becomes less of a self-conscious spectacle and more a piece of unplanned and absorbing art, as they swerve over the street, stop at pubs, talk with friends en route, drink, and enact the day-to-day as though this were any day. 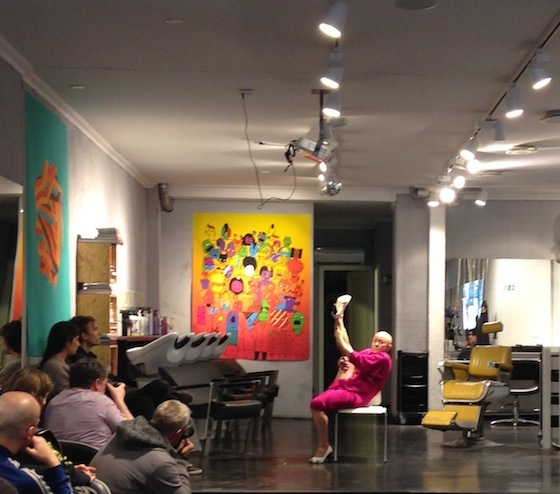 13. A hair salon, like a dentist’s, doctor’s, or state municipal office, is at first glance a publicly neutral site; Alwynne Pritchard’s free performance contrasts with the prosaic nature of the venue. She moves through the utilitarian space with a flamboyance that is decadent, rude, and risky.

“See the discourse as part of the context,” says Alwynne, “and see the context as big as you can.”