The Big Picture: Social Solidarity
Like mom and apple pie, football brings Americans together. It enables spectators to participate in collective life loudly and (sometimes) proudly, despite competing team loyalties. Because such ... 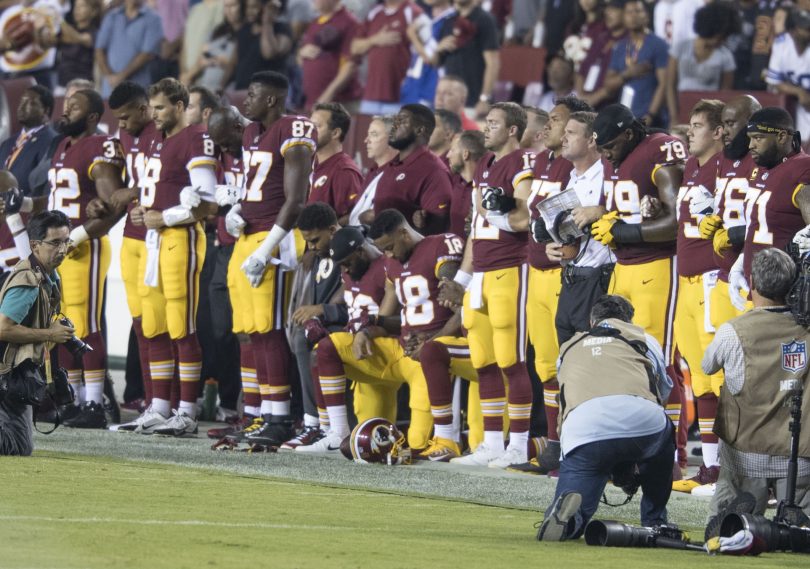 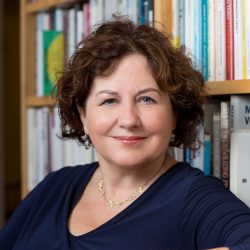 Like mom and apple pie, football brings Americans together. It enables spectators to participate in collective life loudly and (sometimes) proudly, despite competing team loyalties. Because such moments of unfettered collective effervescence are so rare in the United States, the #TakeAKnee movement is generating strong emotions on all sides of the conflict. To patriotic fans, taking a knee means gross disrespect of the flag. To NFL players, taking a knee means honoring the flag and military while protesting racial police violence and denouncing the broken promises of an American Dream not accessible to all.

Donald Trump, the great divider, is deliberately stoking these tensions. By insulting the protesting players (“sons of bitches”), he panders to his base and flatters the pride of those who wrap themselves in the flag. Yet this collective drama is only the tip of the iceberg: calling out those who “take a knee” is but one episode among many in the great seduction scam Trump has been waging since long before his election, with a white working class as his mark. Promoting a return to wishing “Merry Christmas” is also part of this scam, as is Trump’s embrace of “straight” and vulgar talk, which aims to convince folks of his authenticity (coded as antithetical to politically correct middle-class phoniness). And we know there is a scam going on here because so many of his proposed policies, such as the health care and tax reforms, in actual fact work counter to the interests of workers and foster greater inequality.

Athletes take a knee to defend their wounded dignity and to plea for justice, while Trump’s white working-class supporters, long bedeviled by declining living standards and a precarious sense of economic security, seek to reaffirm their place in the world by falling back on the symbols of their national pride and high status (as Americans). They claim recognition through the flag, the national anthem, and, by extension, the military, at the same time as they morally condemn sacrilegious and disloyal Americans, who just happen to be black. Thus the NFL becomes a national cultural battleground for setting the pecking order, or for symbolic group positioning. Wounded pride feeds an escalation in racial conflicts, at a time when collective trust is at a low point, when “black lives matter” and “all races matter” proponents are sparring with one another in an increasingly schizophrenic public sphere.

Trump claims that his opposition to taking a knee, as too his response to the Puerto Rico hurricane disaster, or his border wall politics, or his anti-immigration politics, all have “nothing to do with race.” But his disavowal of racism seems half-hearted at best. Too often, the targets of his vitriol are black or brown. In his racially tinged outbursts, he confirms the thesis of Ta-Nehisi Coates that the current president’s legitimacy largely hinges on promoting the superiority of whites, and white workers in particular, in defending what they believe is their legitimate group position above all nonwhites.1 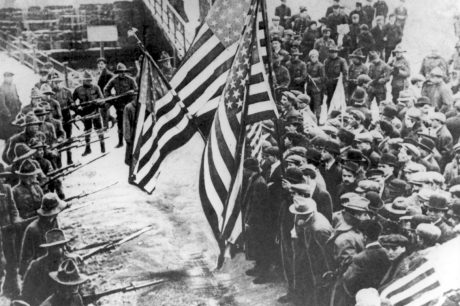 The Big Picture: The Right Type of Citizenship

In a paper titled “Trump’s Electoral Speeches and His Appeal to the White Working Class,” my coauthors and I draw on a detailed computer-based content analysis of 73 of Trump’s electoral speeches to shed light on this seduction scam. We show with numbers that Trump provided this group recognition by blaming globalization for white workers’ downward mobility, and by stressing their traditional roles as providers and protectors of women and children (against the Muslim threat and Syrian refugees, as well as against Mexican “rapists” and “urban” drug dealers).

We were surprised to discover that prior to being elected, Trump did not explicitly pit white workers against the poor (those who “sponge off the system”), but promised “jobs, jobs, jobs” to all hardworking men, in exchange for everlasting loyalty. He also rarely referred to African Americans and Hispanic Americans in explicitly negative language, but emphasized how they too are victims of a declining American economy. Of course, much of that embrace of blacks and the poor was supplemented with code words—“Detroit” and “Chicago” = poor + black—intended to shore up white stereotypes of these other racial and ethnic groups.

In his electoral speeches, however, Trump did often try to appeal to white workers, underscoring the patriotism of this group by scapegoating immigrants, often lumping legal and illegal immigrants together, and feeding the xenophobia nourished by post-9/11 anti-immigrant rhetoric. Focusing on national identity and patriotism, he has found, is a sure way to appeal to downwardly mobile white working men who view Americanness as one of the few badges of honor they still have left, in an era in which the material affluence of the American Dream is increasingly out of reach for them. This is particularly the case when their traditional roles as providers and protectors are also being threatened, as women join the labor force in larger numbers.

Trump’s seduction scam makes him as popular now among non-college-educated whites as he was right after the election, with 57 percent of them judging that he is doing a good job (the figure for the general population is 37 percent).2 These numbers are striking when one considers that the main policies that have been under discussion, health care reform and tax reform, would unambiguously disadvantage this group.

There is something uncanny in how this hate-mongering president systematically and effectively picks tropes that pit groups against one another, accentuating the very markers of class or racial identity that the opposing group will find most repulsive. That he is a marketing genius is not news. But even so, the media have not fully captured how he creates ever-growing havoc in the American polity, feeding hatred and intensifying group boundaries, which translate into an increase in hate speech, bullying in schools, greater social isolation and mental illness, and other standard indicators of a crisis in social solidarity.

For Trump supporters, the NFL has become a national cultural battleground for setting the pecking order.

Fortunately, we notice that in the NFL drama, slowly but surely, the tide is turning and the public is lining up in growing numbers against the president (51 percent of all respondents in October as compared to 43 percent in September, according to the most recent polls).3 In his insistence on fostering group hatred by harassing players, could Trump be misreading the situation? Does the popular support for NFL players mark a turning point, as ordinary citizens begin to grasp the game that Trump is playing?

The NFL drama may be teaching us about a way out of the current civic crisis. Social scientists, religious and civic leaders, and journalists and cultural specialists of all stripes have a special role to play in helping citizens develop the tools they need to make sense of the current moment. We have to inform the public about how group hatred is cultivated, about the role of rhetoric and symbols in feeding that hatred, and about intergroup conflict dynamics.

Knowledge workers need to proclaim loud and clear that national pride belongs to everyone, and that it takes many shapes and hues. We should also engage in an explicit discussion about how to extend cultural membership to the largest number—white working-class men, the poor, and ethnoracial and religious and sexual minorities alike—through the distribution of resources, and by discussing stigmatization (not only racism) and the need to foster solidarity toward all.4

The vast racial and class fault lines fissuring our society mean that fewer professionals are in contact with classes other than their own now than was the case just a few decades ago. The growing inaccessibility of higher education feeds this trend, as the working class is increasingly relegated to low quality K–12 and second-tier college education, and this despite important efforts to bring “first-gen” students to top rank universities.

As suggested by UC Hastings law professor Joan Williams, knowledge workers, by becoming blind to the distinctiveness of their own worldview, often lack the compassion and cultural frameworks needed to understand where workers are coming from. Our own short-sightedness deepens the very chasms that Trump exploits.

Finding ways to understand people across these racial and class divides is one of the great challenges of our times. Only by meeting it can we come to mend our social fabric. This will require not only new forms of messaging, but also strategizing on how to create bridges in a world of communication that is increasingly organized around echo chambers. 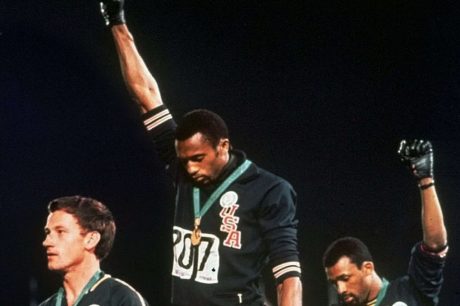 Meeting this challenge will require recommitting to social solidarity, and purposefully reflecting on what being middle (or upper-middle) class does to us. Of special difficulty for us in the academy will be to eschew both the political self-satisfaction of progressive/liberal moral rectitude and the privileges of class that many unthinkingly assume to be somehow “deserved.” After all, the safe neighborhoods and good schools many academics benefit from are made available to us by rotten taxation and school financing systems that work at the expense of the majority. Reveling in our privileges, and consistently misunderstanding what makes those outside of our socioeconomic enclaves tick (morally and otherwise), enables a certain social myopia that can only serve Trump and his allies.

My book The Dignity of Working Men (2000) took a deep dive into the world of its subjects. I found that they were consumed with how to keep the world in moral order, and that this motivated many of their political views and the boundaries they drew between various groups (“people above,” “people below,” the poor and immigrants). Trump has understood how to tap into their instincts and values. Progressive forces would do well to do the same if they don’t want to find themselves facing the prospect, come 2020, of Trump at the helm for four more years.

Featured image: Washington Redskins teammates during the national anthem before a game against the Oakland Raiders at FedExField on September 24, 2017, in Landover, Maryland (detail). Photograph by Keith Allison / Flickr