Boss Poet
Little has changed since Bruce Springsteen explained the origin of his song “Thunder Road” to a seething crowd at the Capitol Theater in Passaic, New Jersey, on September 19, 1978. “There was this ... 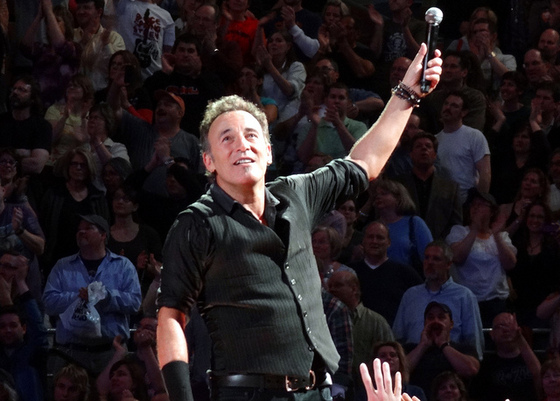 Little has changed since Bruce Springsteen explained the origin of his song “Thunder Road” to a seething crowd at the Capitol Theater in Passaic, New Jersey, on September 19, 1978. “There was this Robert Mitchum movie, and it was about these moonshine runners down south,” he said, running a hand through his hair and leaning so close to the mike that his lips brush its grill. “I never saw the movie. I only saw the poster in the lobby of the theater, and I took the title and I wrote this song.”1 Almost 38 years later, during the summer of 2016, the New Beverly Cinema in Los Angeles showed a rare 35 mm print of Thunder Road (1958). I went to see the poster in the lobby. I stayed for the show. I didn’t learn anything about Bruce Springsteen.

Several months before Springsteen played the Capitol Theater, Elizabeth Spires interviewed Elizabeth Bishop for the Paris Review. “Do you see any connection,” Spires asked, “other than the obvious one of shared subject matter, between your stories and poems?” Bishop answered, “They’re very closely related. I suspect that some of the stories I’ve written are actually prose poems and not very good stories.”2 Like Bishop’s stories or the prelude on stage in 1978, Springsteen’s new autobiography Born to Run is neither a particularly lucid account of what happened when, nor a substitute for the songs themselves.3 Instead, Born to Run is a prose poem that primarily exists to justify Springsteen’s status as a poet. The autobiography works through a series of Springsteen’s personae—rock god of the workingman, band leader a la Count Basie, folk bard in the Bob Dylan mode, father, sex symbol, patriot, antiwar activist, storyteller, preacher—to suggest that the central figure in this complex mythology is the poet.4 Springsteen’s attempt at an origin story becomes, at its clearest and most incisive moments, about how he writes poetry.

Rather than the stories about Springsteen’s childhood or road trips or record deals, the most compelling scenes in Born to Run are scenes of writing. For example, in 1982 or thereabouts (chronology is not one of the book’s strengths), Springsteen sits at the table where he has written for 25 years. “An antique lamp laid dim light on the only other object on the tabletop, a film script. I strummed a few chords on my sunburst Gibson J200, paged through my notebook, stopped and murmured a verse of a song I had under way about returning Vietnam vets. I glanced over at the unread script’s cover page and sang out its title; I was ‘born in the USA.’”

Rock aficionados will salivate at such descriptions of how a classic came to be. But for Springsteen, the origin story is less important than the representation of the poet at work. Scenes of poetic labor are bravura. They point to the true source of Springsteen’s virtuosity, the ability to express his individual experience as universal. Being “born down in a dead man’s town,” as the song goes, is being born a straight, white man in Long Branch, New Jersey, in 1949, trapped in the Vietnam War and a disintegrating industrial world. And yet, for those who feel a special resonance in those words, this dead man’s town could be any town where an urge to live collides with inevitable failure. Springsteen achieves this effect in his songwriting by locating a general feeling—typically some sort of furious, unfulfilled longing or frustrated hope—in images of depleted, indignant, white, blue-collar America.

If this autobiography has a serious failing, it is a lack of the desperation and urgency that so many feel they can touch in Springsteen’s imperfect rasp.

While Born to Run can only describe in mechanical terms how Springsteen’s poetry works, it does address how his band performs that poetry as simultaneously ethnically white and also color-blind. Born to Run confronts this contradiction through an account of Springsteen’s avowed debt to R & B and of his famous friendship—or as he calls it here, his love—with saxophonist Clarence Clemons. Until his death in 2011, Clemons stood at the center of the E Street Band. Frequently photographed embracing or kissing on stage, Springsteen and Clemons are made to embody two halves of the perfect artist in Born to Run: Springsteen the poet and Clemons the musician. “Even after all my success,” Springsteen writes, “I sit here in envy of Rod Stewart, Bob Seger, Sam Moore and many other greats who can sing magnificently and know what to do with it. My vocal imperfections made me work harder on my writing, my band leading, my performing and my singing.” This hierarchy of roles—poet, bandleader, instrumentalist, singer—sets up the E Street Band as a unit with Springsteen the poet-sovereign.

Led on one side by Springsteen and the other by Clemons, the E Street Band is legendary for four-hour marathon shows that more closely resemble tent revivals than concerts. Most rock groups either ignore or conceal historically black forms of performance like gospel choirs, call-and-response, and work songs that are key to the E Street Band style. As “the Boss,” Springsteen orchestrates an ethnically syncretic performance that translates Italian Irish whiteness into a color-blind universal; however, Born to Run organizes Springsteen’s musical responsibilities and personae in such a way that the universal is always rooted first in the poet’s imagination. 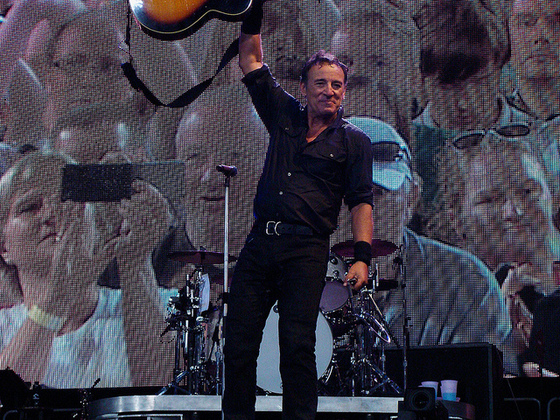 At their best, Springsteen’s poems capture his experience growing up in a particular time, the Cold War, and a particular place, New Jersey, while expressing the rightest heart of rock music, a kind of maybe-universal striving after a question posed in “Born to Run”: “I want to know if love is wild, Babe / I want to know if love is real.” Who can know that love is real? Who can give it, who can receive it? The issue of audience and representation is, at least according to Born to Run, uncomplicated. If you feel it, then you know it. Have it. Live it.

A critical reading is not present in Springsteen’s autobiography, but neither are those other personae—Springsteen the lover, the rocker, the earth shaker—that animate the poetry and make it convincing. Reading through Springsteen’s entire life—from 16 years old, playing Cafe Wha? with the Castiles, to 24, on the brink of commercial failure, 25, to paraphrase Jon Landau, the future of rock and roll, and finally 67, settled, an autobiographer—one leaves the book feeling that the best way to learn about Springsteen remains the music.5 Which is to say, there is no broken hero on “a last chance power drive” in Born to Run. If this autobiography has a serious failing, it is a lack of the desperation and urgency that so many feel they can touch in Springsteen’s imperfect rasp. Perhaps it is too much to ask from a man who has already bared so much, and who in this book tries to show us again the very thing he has for many years in his music. Reading Born to Run is a treat for a fan that wants nothing more than to sit close to Springsteen and listen to him talk. Yet it is the songs that will endure, that will remain vital and somehow, for some people, true. Springsteen’s poetry exposes more rudely and profoundly than prose ever could what lies behind his brilliant disguise.

Featured image: Bruce Springsteen at the Palace of Auburn Hills outside Detroit, 2012. Photograph by GabboT / Flickr