Bringing Outsiders In
Nothing about outsider art is simplistic. Applications of the term “outsider” to art are almost always accompanied by lengthy disclaimers about why it’s being used, its limitations, its dissatisfying ... 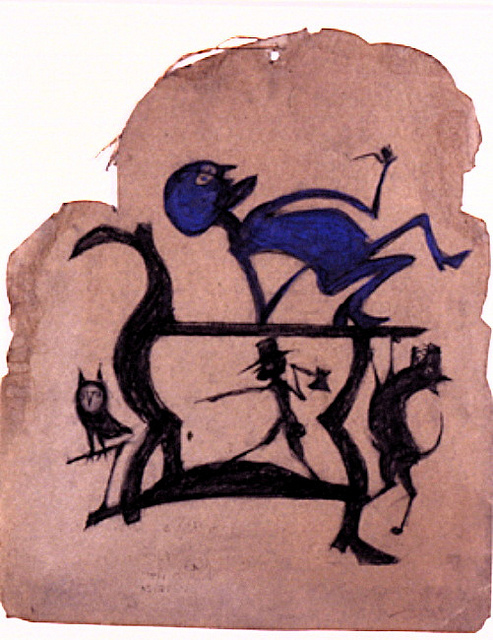 Nothing about outsider art is simplistic. Applications of the term “outsider” to art are almost always accompanied by lengthy disclaimers about why it’s being used, its limitations, its dissatisfying imprecision. The genre as a whole is hard to define: united by the notion that the artists are self-taught, it nevertheless represents a wide range of techniques and materials from oils to soot-and-spit. The biographies of the artists are often as moving and idiosyncratic as the works themselves, yet deterministic interpretations threaten to undermine the sophisticated expression and abstract representation present in the art. The Philadelphia Museum of Art’s exhibition “Great and Mighty Things”: Outsider Art from the Jill and Sheldon Bonovitz Collection (March 3–June 9, 2013), now joined by an eponymous book, showcases these complexities.

The exhibition is arranged by artist, and includes some of the most well-known outsiders—James Castle, Bill Traylor, William Edmondson, and Martín Ramírez. James Castle’s work stands out, in part because it is so congruent with the aesthetics of abstraction; its grammar and ghostliness are simultaneously surprising to find in an outsider art show and completely expected in the high art space of the PMA. By comparison, Simon Sparrow’s spirited assemblages of dollar-store junk feel homegrown, but their scale and visual complexity attract audiences. The exhibition’s organizing principle is the taste of its collectors, highlighting how personal choice and expression operate for patrons and artists alike. There is something both arresting and overly romantic about an institutional art space that encourages you to imagine what is possible when creativity and choice are not constrained by market logics.

Even as outsider art remains on the margins of the American canon, tracing its changing reception reveals how art interpretation reflects the broader questions and anxieties of our times.

In reality, the life cycle of the genre more closely reflects debates in cultural theory than an idyllic dreamspace of possibility. According to the familiar story, an art world increasingly alienated by its own insularity sought inspiration from outside its walls; with the discovery that everyday people can create their own worlds and often do, a new genre was coined: “outsider art.” In fits and starts since the early 20th century, the work generated buzz among some cultural elites as encapsulating the “authentic voice of the people,” an approach epitomized by the 1982 Black Folk Art in America exhibition and paralleling similar tendencies in the field of cultural studies. Meanwhile, critics began to deconstruct the concept of authenticity, which only enhanced the works’ visibility and viability in the market. By the 1990s, the irony of the situation was mediated by a growing awareness of the hegemonic commodification of subcultural style. More recently, outsider art has re-emerged as museums aim to actively engage visitors and become accessible to new audiences in an era marked by neoliberal funding pressures, the professionalization of museum studies, and social media saturation. Even as outsider art remains on the margins of the American canon, tracing its changing reception reveals how art interpretation reflects the broader questions and anxieties of our times.

The PMA’s attempts to use outsider art as a platform for engaging audiences should be applauded—with caution. Visitors are greeted with a complimentary smart phone guide. The wall text and layout are easy to follow. There is a temptation, though, to think of outsider art as inherently accessible to many publics. This assumed aesthetic accessibility can be double-edged in a way that recalls the reception of conceptual art: the audience is cued to respect the work as meaningful, but many are also thinking, “Is this really art? I could do that.” The show missed an interpretive opportunity to demonstrate how some of the more alienating ideas in contemporary art, such as privileging form or process as the subject of a piece, are actually part of how we interpret daily life. This continuity between art and everyday experience is exemplified by outsider art.

The museum chose to interpret the aesthetic objects primarily through the artists’ life histories; this choice is reinforced by the spatial separation of each artist’s work into a series of mini solo shows. The exquisite exhibition design elevates oft-disregarded objects to cultural importance, and the “solo show” structure confers respect on an artist’s entire oeuvre. The space makes it clear that the PMA curators hold these artists in high regard.

Yet one unfortunate sentence of wall text demonstrates the pitfalls of a biography-powered show. The line on the panel for Bill Traylor’s section reads: “He had no discernible motivation to make art; perhaps it was to chronicle his memories of farm life—he was born a slave on a plantation and remained on the land as a farmhand for most of his life.” This sentence stings because Traylor’s life seems to offer many motivations for making art; thematizing it as if it doesn’t reinforces the idea that manual labor and creative practice are incompatible, or worse, that their union is unimaginable, which threatens to undermine the entire show’s valorization of the “outsider.” This statement also shows how the use of biography can be overly deterministic.

Art is not causal. It is the space of the imagined, the re-imagined, and the re-worked real. Life circumstances certainly help us deepen and contextualize our readings of visual art and literature, but if taken as determining “facts” they prevent viewers from probing deeper or making their own meaning out of abstractions. In the case of outsider art, this tendency prevents us from learning from the aesthetic, formal, and situational insights of the artists.

For instance, you can readily see memories of slave and farm life in the scenes Traylor depicted, but looking longer, you can see how these memories are re-worked through surprising color dyads, humor, and composition, suggesting at times social critique, at others deep loneliness. If we build thematically on Traylor’s use of memory, we can see resonances across different artists’ works. Sam Doyle’s cultural memory of slave life and memorialization of black achievement, George Widener’s stunning graphic design of mental math, and Eddie Arning’s abstractions of everyday encounters: together, they chart a path through memory that visually demonstrates the utility of its mutability.

The Bonovitzes have promised to give nearly 200 works from their collection to the PMA; this donation—considered as a whole—provides an untapped resource for generating new art historical insights, much like the “outsider artists” themselves.

“Great and Mighty Things”: Outsider Art from the Jill and Sheldon Bonovitz Collection