Burning Books to Stay Alive in Agualusa’s Angola
In 1975, amid the violence and chaos in Luanda on the eve of Angolan independence, Ludovica Fernandes Mano barricaded herself in her apartment. There she remained ... 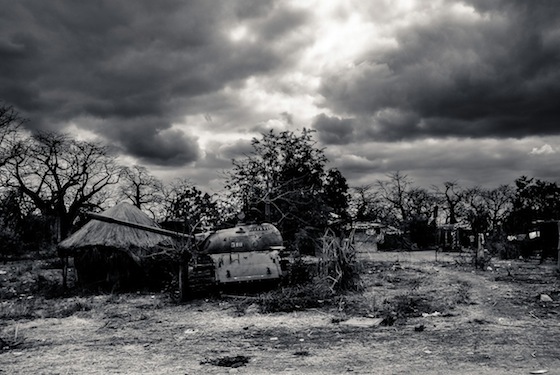 In 1975, amid the violence and chaos in Luanda on the eve of Angolan independence, Ludovica Fernandes Mano barricaded herself in her apartment. There she remained, cut off from the world, until 2003, just after the end of the country’s civil war. In the foreword to A General Theory of Oblivion, Angolan writer and journalist José Eduardo Agualusa recounts how his ninth novel took form around the incredible story of this reclusive Portuguese woman, who managed to survive for 28 years on what she could grow or catch on her rooftop, from beans, bananas, and pomegranates to pigeons and rainwater. Agualusa presents the coordinates of Ludo’s death (October 5, 2010, at Sagrada Esperança clinic), elaborates on how he came into possession of the journals she kept while in seclusion, and alludes to photographs of the apartment walls she covered with charcoal inscriptions after the notebooks ran out. Then he raises an eyebrow and states, “What you will read is, however, fiction. Pure fiction.” Ludo’s story becomes the entry point into a shape-shifting series of episodes—some quiet, some explosive—that build on events that have marked Angola’s collective memory over the past four decades.

In compressed, haunting interludes that move between diary entries, poems, and close third-person narration, Agualusa pieces together this Portuguese woman’s strange, solitary existence. Alone save for an albino German shepherd named Phantom, Ludo sustains her imagination with whatever she can spy from her apartment, the books she reluctantly burns for cooking fires, and her own outpouring of words. “After burning the library, after I have died, all that remains will be my voice,” she writes. “In this house all the walls have my mouth.” Dream and waking life resemble each other in the spare language of a figure akin to a survivalist Emily Dickinson. In one poem she says, “I am oyster-sized / kept apart here with my pearls / … shards in the abyss.” With “oyster-sized,” translator Daniel Hahn creates a pun on “ostracized” to preserve the echoes embedded in “eu ostra cismo,” which in the Portuguese sounds like “I ostracism” but more literally means “I the oyster sit brooding.”

Ludo’s story seems to have the makings of an intense exploration into the individual soul, reminiscent of Clarice Lispector’s The Passion According to G. H., whose protagonist embarks on an interior journey within the confines of her Copacabana apartment after encountering charcoal drawings on the wall of her maid’s room. Yet A General Theory of Oblivion lacks Lispector’s psychological rawness and penetrating mysticism. Agualusa is more of a storyteller; whenever one perspective threatens to dominate the whole, he opens another window. The narrative takes some sly twists and turns as it increasingly ventures beyond Ludo’s apartment to follow the lives of others caught up in events large and small, from Angola’s history of proxy wars and postcolonial factionalism to the trajectories of a carrier pigeon, a monkey named Che Guevara, and a package of stolen diamonds. What is initially framed as an agoraphobic retreat from external hazards reveals itself to be a high-spirited ensemble piece. We meet a mercenary on the run, enigmatic shepherds from the Kuvale tribe, a leftist revolutionary turned entrepreneur nicknamed Little Chief, an intelligence agent who leaves the corrupt communist regime to become a private eye, and a seven-year-old street kid, Sabalu, whose life becomes intertwined with Ludo’s in an unusual way.

The result is a dizzying mix of characters and genres. Cinematic imagery and the unraveling of mysteries splash over moments of stillness and lyric solitude. Action sequences suddenly freeze-frame into landscape portraits—baobab trees against a vast blue sky. Hahn accompanies these shifts with agility and assurance in his fifth translation of Agualusa, whose ambitious vision has a virtuosic appeal that evokes the sweeping moral imagination of José Saramago and the energy of Marlon James’s A Brief History of Seven Killings. The novel can feel uneven at times, as when exchanges between antagonists sound like stilted B-movie dialogue or a dénouement that merges various plotlines à la Pulp Fiction ultimately falls flat. The book originated as a screenplay, and in some scenes, lengthy descriptions grow unwieldy in the attempt to convey complicated choreography better served by the immediacy of film.

Even so, A General Theory of Oblivion is an absorbing read that manages the subtle trick of steeping the uninitiated in Angolan culture and history without coming off as overly explanatory. Agualusa’s characters may wish to forget past traumas and to be forgotten, but he recounts their intersecting histories to form a composite portrait of his country that vibrates with a compulsion toward remembrance. This collage of many faces bears a kinship to his earlier work, The Book of Chameleons, about a man who sells fake genealogies to the new Angolan elite. That novel won the 2007 Independent Foreign Fiction Prize and established Agualusa’s reputation abroad as a leading voice of Lusophone African literature, alongside Mozambique’s Mia Couto. Last year, Couto was a finalist for the prestigious 2015 Man Booker International Prize, and A General Theory of Oblivion recently made the shortlist for this year’s newly configured version of the award.1

Like his good friend Couto, Agualusa is an author of both national and cosmopolitan scope. His stories represent Angolan consciousness but also reflect the sensibilities of someone who has lived abroad in Portugal and Brazil and recognizes that his audience is largely international. The narrative is thick with references to Pan-African culture, like Congolese sapeur dandies, the Négritude movement, tales of witchcraft, and the rumba craze in Zaire. Agualusa also maps transnational Lusophone networks with nods to Cape Verdean music and the Portuguese poet Fernando Pessoa, though Brazil holds the most influence, in allusions to artists as varied as the 19th-century novelist Machado de Assis and pop stars Chico Buarque and Elza Soares. In one scene, Ludo recalls the library she’s had to burn, which includes Jorge Amado’s novels, James Joyce’s Ulysses, and Guillermo Cabrera Infante’s Cuban masterpiece, Three Trapped Tigers.

In a 2007 interview, Agualusa notes the difficulty of reaching an African readership due in part to severely limited access to books. He concludes, “We, as African authors, are more like translators—always trying to translate our reality for the foreign reader.”2 Hahn inserts the occasional unobtrusive contextual cue (“the Portuguese city of Aveiro”), but Agualusa himself senses a need to introduce local terms: “Finally there was a rip in the cold curtain of low-hanging clouds, which in Luanda they call cacimbo, and the rain came down again.” Elsewhere, he pauses the action to describe ambiguities of race: “One of those characters who in Angola are often called lost frontiers, because by daylight they look white, and at twilight they are discovered in fact to be part mulatto—hence the conclusion that sometimes you can understand people better far away from the light.” Agualusa acknowledges his own outsider status when it comes to the shepherds who roam Angola’s southwest Namibe region, borrowing excerpts from poet and ethnographer Ruy Duarte de Carvalho’s work on the Kuvale tribe.

If there is one aspect of African thought that Agualusa wants most to impart to his readers, it’s the recognition that myth and history hold equal sway and are often interchangeable.

Ludo functions not only as the intriguing case of a woman surviving on the extreme margins of humanity but also as a stand-in for foreigners to whom Africa remains “the dark continent.” After her sister marries an Angolan mining engineer, Ludo reluctantly accompanies them to Luanda, where she turns her nose up at the “savage” food and culture, though over time she gives up her Portuguese identity. Her jumbled apprehension of the surrounding unrest as ex-colonials and the Angolan bourgeoisie flee the capital mirrors foreign readers’ potentially foggy notions about the source of the panic—the 1974 military coup in Portugal that resulted in withdrawal from its colonies, followed by the drawn-out Angolan civil war that the country is still recovering from. We absorb the situation through atmospheric fragments: explosions, gunfire, political arguments, shouts, and celebrations. Snippets from radio broadcasts offer points of contact with the era’s global upheaval—Israeli commandos rescuing hostages in Uganda, Chairman Mao’s death, a declaration in French about victory for freedom fighters. These intermittent reports also provide the most explicit grounding in the local situation, announcing “the difficult progress of the government troops, supported by the Cubans, against the improvised unstable alliance between the UNITA [National Union for the Total Independence of Angola] party, the National Front, the South African army, and mercenaries from Portugal, England, and North America.”

As the novel progresses, it moves away from the vague style of the first half to assemble a more complete overall picture. Initial episodes get retold from multiple perspectives and with fuller detail. What were the sounds of “some obscure African language” from Ludo’s point of view are later identified as Lingala and Quimbundo by Angolan characters. When Ludo recounts a scuffle outside her window in a diary entry dated May 27, we eventually learn the identities of those involved, and that the full date is May 27, 1977, when a protest against the communist government led by the MPLA (People’s Movement for the Liberation of Angola) resulted in the massacre of thousands.3

If there is one aspect of African thought that Agualusa wants most to impart to his readers, it’s the recognition that myth and history hold equal sway and are often interchangeable. Yet beyond emphasizing this as a distinctly African, or even Angolan, philosophy, Agualusa renders it as a universal currency: “A man with a good story is practically a king.” Reality is forged as much by faith in the improbable as by demonstrable “fact.” The earth can open up and swallow a prominent French writer or an entire village. A Boeing 727 can vanish in the skies above Angola, an unsolved mystery that made international headlines in 2003.4 A Lusophone African writer can convince a surprising number of foreign reviewers that the tale of a woman walled up in her apartment for almost 30 years is true.5 In creating a novel that weaves in and out of what holds up to fact-checking, Agualusa asks readers to let go of the need to distribute value and meaning according to these distinctions. The blend of invention and citation that shapes A General Theory of Oblivion shows Agualusa’s dual affiliation to notions of truth as a journalist and novelist, while recalling that the word “história” in Portuguese means both “history” and “story.”