Buster Keaton Falls Up
Comedy demands a fall guy—someone upon whom the absurdity crashes and yet who emerges unscathed. And in comedy, Buster Keaton remains unrivaled. 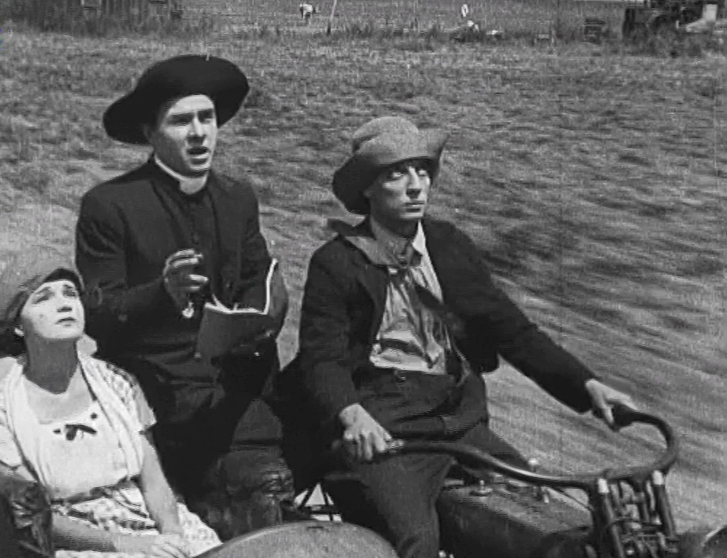 Comedy inverts norms and breaks barriers. But in order to reveal, as Northrop Frye suggested it must, “absurd or irrational [patriarchal] law,” comedy requires a fall guy. There has to be somebody on whom that law can come crashing down, in all its absurdity, all its irrationality—somebody who improbably emerges at the end, unscathed or even triumphant. Buster Keaton, that beautifully deadpan clown known as “The Great Stone Face,” had the pliability—and the subtle anarchic capacity for nonviolent resistance—to fill that role like nobody else before him. Or since.

Keaton is remembered now as a brilliant stuntman and inventor of trick shots (see, for instance, the cutaway walls of the house in 1921’s The High Sign). However, his true genius resides in his delightful disorientation from—and re-orientation to—a world that is never quite what he takes it to be.

Although best known for full-length features like Sherlock Jr. (1924), The General (1927), and Steamboat Bill, Jr. (1928), Buster Keaton made—that is to say, wrote, directed, choreographed, starred in, and stunted in—19 amazing silent “two-reelers” between 1920 and 1923. (Mostly collaborations with Eddie Cline and Joseph Schenck, these films are largely forgotten but readily available on YouTube.) In reel one (more or less the first 10 minutes) of each of these shorts, Buster is a bumbling, all-wrong figure of antic, absurd fun, blocked at every turn by capricious authority figures: a peremptory father, a dastardly older rival, a murderous gang of assassins. Then, somewhere in the second reel, the tables turn.

Reel one features social dejection and physical abasement. In The Scarecrow (1920), for example, a downcast farmhand Buster is walking along (9:38) when he spots his beloved dancing with another man. Dejected, Buster himself spins away—hidden from his sweetheart by a wall of hay bales, but visible to the audience in his disconsolate parallel play. Then (from humiliation to pain) his moping, spinning dance takes him into the path of a dog he believes is rabid. The audience knows there is nothing to fear (that white foam actually comes from a cream pie the dog just gobbled) so we can delightedly watch the pooch chase Buster through doorways and windows, up ladders, along narrow walls, over perilous drops.

Buster’s dash through that endlessly varied obstacle course throws him into the sort of purely physical exertion that turns stunts into something more. If you want to signal to an audience that what’s happening is life itself—not a mere simulacrum of it—man chased by dog does the trick. This is the case for the same reason that actors famously loathe working with animals and babies: they offer the autograph of the actual.

The second reel of these shorts, however, turns around and runs the same process in reverse. Now, Buster’s physical clowning becomes a social asset rather than a liability. In The Scarecrow, we watch a bedraggled Buster drag himself out of a river and go down on one knee to tie up his laces (17:30). Lo and behold, his beloved appears while his head is down, just in time to transform his kneeling form into that most social of icons: man proposing on one knee. She bats her eyelashes delightedly, and the intertitle reads: “This is so sudden.”

Keaton’s true genius resides in his delightful disorientation from—and re-orientation to—a world that is never quite what he takes it to be.

The delight of the films is the truth and untruth of that statement. Everything relies on Buster’s antic kinetic energy (his vaudeville-derived slapstick clowning) suddenly coming into contact with plot, so that shoelace-tying turns into a proposal. Lest we miss the point—that every social situation arises first and foremost from a physical intersection of body one and body two—the couple speed off on a motorcycle that soon careers into (oh, second happy accident!) a street-crossing priest. Gathered up on the beloved’s lap, the clergyman is in the right place and time to perform a fortuitous speeding wedding ceremony.

One lesson I draw from all this back-and-forth is the power of pliability. Charlie Chaplin gins up the pathos by presenting himself as a still point in a changing world; Harold Lloyd is so well adjusted to his environment we can sometimes forget what is the environment and what is Harold Lloyd. Keaton aims higher and lower at once. Buster is not the life of the party, but he is also not external to the machinery of life. He’s an octagonal peg that halfway fits into life’s round hole.

Unlike the work of Chaplin and Lloyd, Keaton films rest neither on rebellion nor on conformity, but on imperfect alignment. Buster would succumb to his circumstances in an instant, if he could just figure out how.

Are Keaton’s shorts anything more than way stations on a long, straight comedic track, one that runs from Shakespeare’s A Midsummer Night’s Dream to more recent romantic comedies like Sleepless in Seattle or The Big Sick? What principally makes these two-reelers special is the way Buster’s physical adeptness—his stunts and his burlesque—reveals what it means to walk through the world without being “all there.” Buster reminds you what it means to inhabit two places at one and the same time: I’m tying my shoelace—but I’m also proposing. I’m speeding down a crowded road on a motorbike—but I’m also corralling a priest.

Critics from James Agee and Dwight MacDonald onward have praised Keaton’s humor for incarnating the clown’s capacity to fit his body into any situation, no matter how absurd or impossible—to become a bodily response to his situation. The story these critics tell has an appealing simplicity. Once the motion-picture industry had demonstrated the commercial as well as the formal potential of rapidly flickering pictures in the dark, the music hall and vaudeville needed to find a way to thrive on celluloid as well. Enter Joseph Frank Keaton—born 1895, into a traveling stage family, and nicknamed Buster early in life for his energetic pratfalls—who turned his vaudeville training and eager experimentation with camera tricks and special effects into distinctive comic films.

The way I see it, though, Keaton’s films (the features as well as the shorts) succeed by exploring the perpetually timely problem of inhabiting both a social and a physical world; the impossibility of mastering all one’s frames of reference at once. In what may be my favorite two-reeler, The Boat (1921), Buster is the earnest homemaker who only remembers to hang a picture on his wall when the wall is actually the hull of a boat. The result? Hanging the picture also involves poking a hole in the boat’s side and letting in the ocean. This is a joke that Keaton heightens by zooming in on the painting that Buster has been hammering into the boat’s side: an oceanscape.

Buster’s first reaction when the water starts pouring through is to check the painted waves, as if it were the painting that had suddenly come to life and started leaking. He responds to one frame, but the audience are always aware of another frame, one that Buster himself seems not to recognize. There is no way to grasp one’s world completely—because that seemingly complete world is itself always only a limited frame of reference, traveling through a larger world.

Deep Focus: “The Russians Are Coming, the Russians...

In Convict 13 (1920), for instance, Buster begins as a clueless bourgeois golfer playing near a state prison that (unbeknownst to him) has had an escape. Moment #1: After being knocked unconscious by a convict who then switches clothes with him, Buster examines himself, sees “13”  on his black-and-white-striped sleeve and gives a tiny, beautifully expressive shrug—nu, I’m a convict. Moment #2: After a scene of headbanging chaos inside the prison (Keaton’s films depend a lot on Buster being knocked out and coming to in an altered world), he wakes to find himself wearing a guard’s uniform—nu, I’m a guard.

The world is full of accidents that turn out for the worst—chance encounters that lead you astray from the path you wanted, the path you really should have taken. Sometimes, though, tying your shoelace can get you the girl; sometimes, motorcycles do run into handy priests.

Buster is certainly not master of his universe—but neither is he purely set adrift on its ebbs and flows. He is endowed with just-perceptible desires and thoughts, difficult but not impossible to express in a world that he partially understands, partially finds flabbergasting.

Someone once told me a joke about the American transcendentalist Margaret Fuller (yes, yes, this probably happened in grad school …). Fuller walked into a tree; when Emerson asked her if she hadn’t seen it, she replied, “Oh yes, I saw it—I just didn’t realize it!” For me, the inexhaustible delight of watching Buster Keaton comes from those moments when he realizes what he’s walked into. But these are comic, rather than tragic, two-reelers. When Buster walks into a tree, it’s the tree that breaks.