Canine Control
Kornél Mundruczó’s White God has one of those premises that feels unique but also strangely inevitable: a mixed-breed dog named Hagen, abused by everyone except the 13-year-old girl who loved him ... 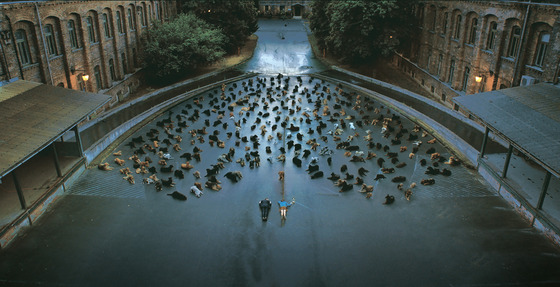 Kornél Mundruczó’s White God has one of those premises that feels unique but also strangely inevitable: a mixed-breed dog named Hagen, abused by everyone except the 13-year-old girl who loved him, decides he’s had enough and leads a bloody revolution against humankind. We glimpse, in the opening scene, his canine army swarming the streets of Budapest—a blurry horde, a holy terror. The next scene flashes back to something strikingly, almost dialectically different: Hagen playing fetch in a middle-class backyard. Wide shots of unstoppable canine chaos give way to shakycam footage of banality—the kind of “home video” that disaster movies tend to begin with (see Cloverfield) to suggest a world of balance not yet ready for the crisis that will befall it. The difference here is that Hagen himself, icon of domesticity, is destined to become the big monster, and we’re probably going to root for him. With merciless forward momentum, the film depicts the acts of cruelty that turn a cherished pet into a posthuman vigilante.

Dog movies like Air Bud present the animal as an anthropomorphized individual; eco-horror movies like The Birds as a defamiliarized collective. White God combines the two approaches, creating a disorienting friction between our impulse to identify with Hagen and our fear of animals run amok. What makes the film intriguing is that it shows how our revulsion toward the collective fuels our attachment to the individual, and vice versa.

According to the Hungarian government, Hagen is an unregistered “mongrel,” a public menace. But to Lili (Zsófia Psotta), a dour and precocious teen, he’s everything her divorced father isn’t: warm, dependable, empathetic. Everyone at the slaughterhouse where he works calls Lili’s father (Sándor Zsótér) “Professor” because apparently he used to be one; for whatever reason, he’s ended up a meat inspector, as drained of affect as his specimens are drained of blood. The most gruesome scene in the film takes place early on: a hanging cow is sliced open, its guts spilling directly onto the camera. The Professor gives no reaction except a stamp of approval. Such is his lack of compassion for animals that he ends up throwing Hagen out into the city streets to fend for himself among the mutts and the strays.

In their society, Hagen finds egalitarianism. The dogs stick together, watch out for each other. There’s something pleasantly Disney-like about the way he scampers into alleys with his shaggy white terrier sidekick, thwarting an army of men with catchpoles. But then, all too quickly, the film adopts a narrative template introduced by Black Beauty a century and a half ago: Hagen is caught and transferred from owner to owner, each more abusive than the last, until he reaches a breaking point. It’s at that point that the film becomes Black Beauty II (or 2 Black 2 Beauty), the gonzo direct-to-DVD sequel—a campy, full-throttle revenge thriller, with Hagen out for blood.

The title suggests an homage to White Dog, a 1982 Samuel Fuller film that uses stray dogs and dogfighting to allegorize racism. But the equation, like the word ‘dog’ itself, has been inverted: the film uses racism as an allegory for the plights of animals—those abject animals that the city, in order to sustain itself, must oppress and cast aside. In a way, the fate of the dogs isn’t as bad as the fates of other creatures. The only other animals in the film are the cows that hang in the Professor’s sterile inspection room and march to their efficient demise. The frenetic blur of canine rage that Hagen commands by the end of the film recalls a line at the beginning of Bleak House: “dogs, indistinguishable in mire,” a danger to urban space and a constitutive element of it. But the cows here recall the line that comes right after—“Horses, scarcely better; splashed to their very blinkers”—and remind us that those indistinguishable dogs have certain freedoms. Like Dickens’ mechanized horses, these cows are the lumpenproletariat; they have no choice but to be part of the order of things. It is the mutts—in their mixedness, their itinerancy, their potential for violence—that represent a true danger to order, even as order thrives on its attempts to contain them.

In a strange way, the film makes Franz Liszt’s Hungarian Rhapsodies central to all of this. The story of Hagen’s descent into the animal cruelty underworld is intercut with the story of Lili’s involvement in a youth orchestra, where she plays trumpet alongside her misfit friends. Much of this plot veers into regrettable teen angst territory—stilted dialogue, too-cool-for-school apathy. The film’s humans are invariably less interesting and charismatic than the dogs. Nonetheless, the meshing of Hagen’s misadventures with classical music of such bombastic grandeur is one of the film’s most engaging quirks, especially when the very same combo shows up in, of all places, an episode of Tom and Jerry that Hagen watches while his friends are being put down at the pound. Tom sits at a piano and pecks deliberately at the keys, his body stuffed into a rigid, ridiculous tuxedo. Anthropomorphism encloses him, imprisons him. What Hagen doesn’t see—or maybe he does, and we just don’t see him see it—is what he ends up performing on a larger scale: the subversion of Jerry, who sabotages the piano from the inside.

White God relies on its anthropomorphic camera, our anthropomorphic spectatorship, to generate empathy and involvement, two things possible for Hagen but not for the cows. But it also presents anthropomorphism as yet another—perhaps the most effective—technology of abjection and control. In this way the film is a lot like John Jeremiah Sullivan’s essay “Violence of the Lambs,” which collects mysterious anecdotes of animal uprising across the world only to reveal, in the end, that all of them were fake. The idea of animal uprising must be understood for what it is: a human fantasy. It’s yet another anthropomorphic fiction, among all the other forms of narrative and allegorical projection that keep animals in place. White God helps us see that; it also helps us see why the fantasy has so much urgency and appeal.