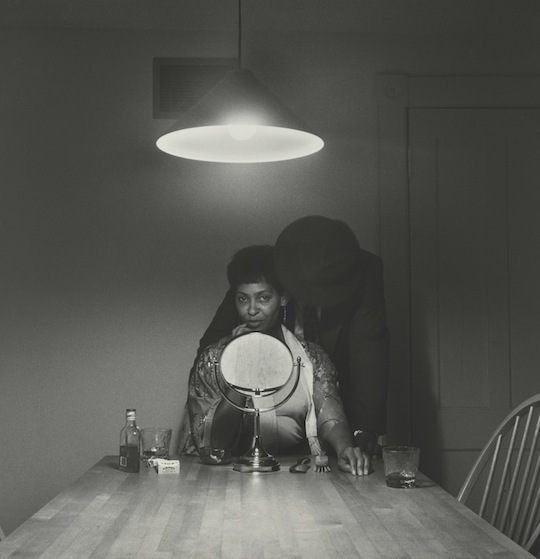 The Carrie Mae Weems retrospective cries out for the spiral at the Guggenheim. But instead 30 years of work, asking bigger and bigger questions, is split across two side galleries two floors apart, while the Italian Futurists bluster their way up the curved ramp.

On the lower level are Weems’s family pictures from 1978–1984, their slangy captions laughing at dysfunction. Then the “Kitchen Table” pictures, of Weems as everywoman rooted in the same chair at the end of the same table, first alone, then with her man, later with a blur of children in front of her, with friends, then alone again. Scattered throughout are short framed texts—stylized, theatrical, poetic—that spin off into song lyrics. Only in the words does the woman soar, but it’s not terrible growing older in the kitchen chair either.

One windy April day, I went to the show with several teen writers on the staff of Represent, a national magazine written by and for youth in foster care that I edit. It was everyone’s first time in the Guggenheim, and the first time in an art museum for the majority. Several of the writers, many of whom are African American or Latino, remarked on the same photo toward the end of the Kitchen Table series of Weems leaning on the table staring back at the camera. “She looks so strong.”

After we’d toured the first gallery, we ascended through the Italians’ jittery paintings of machines and motion. The fascists didn’t see many people in their future. I hurried up to get back to the faces.

The upper gallery has Weems’s later, more overtly political work, starting with 1995–1996’s “From Here I Saw What Happened and I Cried.” These are archival photos tinted blue and blood red of slaves and of Africans displayed as specimens and sideshows. Over the images, Weems layers enraged text that keeps exploding into a bitter “Ha!” 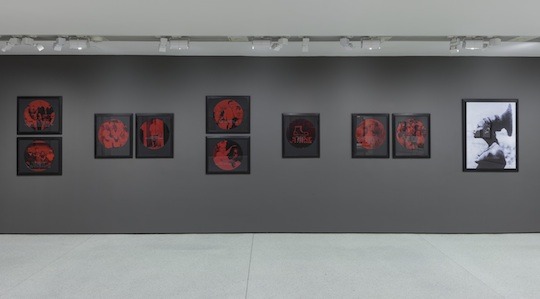 Her response to historical materials is more tempered, funnier, in “Not Manet’s Type,” from 1997. Weems puts her strong middle-aged body into art-historical tableaux over commentary in a Holzeresque sans serif. Below her naked form, back to camera, looking at a bed, she muses, “It was clear I wasn’t Manet’s type. Picasso—who had a way with women—only used me and Duchamp wouldn’t even consider me.”

I chuckled. I was joined by one of the Represent writers, Diamonique Perry, beautiful, vigilant, her fake lashes out to here, spikes jammed through her tongue and lip and bristling from her leather jacket. Diamonique asked, “Why’s she naked?” I said, “She’s posed like famous paintings, but those paintings never have anyone black in them…” I trailed off. It was a bigger question, one the show keeps asking.

A few pictures down, Diamonique and I arrived at the punchline of “Not Manet’s Type.” Weems faces the camera this time, her nudity incongruous as it often is when a personality hijacks an image. The text: “It could have been worse. Imagine my fate if DeKooning had gotten hold of me.” I laughed louder and explained that DeKooning painted jagged, scary women. Diamonique nodded, her eyes darting. “She’s still naked?”

Around the next corner, as if she’d asked herself the same thing, Carrie Mae Weems wanders through the huge photographs of her 2006 series “Roaming” in a stately black dress, stopping in front of European museums, as if to mutely ask how an artist like her gets inside.