Caught in the Game
The Cambodian filmmaker Rithy Panh devotes just over a minute of his documentary, The Missing Picture (released in the US in March), to the work of Ang Saroeung, a Khmer Rouge cameraman who filmed ... 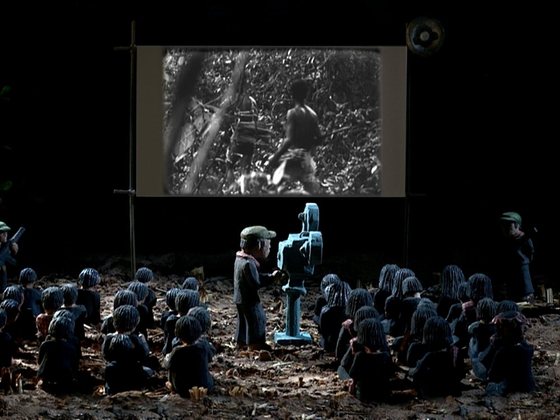 The Cambodian filmmaker Rithy Panh devotes just over a minute of his documentary, The Missing Picture (released in the US in March), to the work of Ang Saroeung, a Khmer Rouge cameraman who filmed the fields of Democratic Kampuchea as they were—barren—and the glorious “new people” of the nation as they were—starving and devastated. When Saroeung filmed Pol Pot giving a speech, the footage he produced was obscured by pulses of white haze, which intermittently disrupted his panning shots of the crowd in the rhythm of a failing heartbeat. This effect may have been due to a technical problem, but it nevertheless unsettled the tone of the propaganda and helped put Saroeung out of favor; he was later tortured and killed by comrades whose collective taste in film favored the ideological parable.

In The Missing Picture, Panh remembers being forced to watch those films, in which the soldiers of the colonizer died wailing at the hands of the patriots, with the other prisoners of the labor camp he and his family were trapped in. He was 11 years old. As the son of what the Khmer Rouge called “new people” (urban, educated, middle-class), he had been marked for reformation through labor and the occasional improving film. “Of course,” Panh explains in plaintive voice-over, “we knew the actors were bad. The film was bad.” Perhaps he means that the film and its context were morally bad, even fundamentally evil, but it provokes a rueful pleasure that even at such a time, and in such a place, the young Rithy Panh could still be offended by bad taste.

Upon coming to power in 1975, the Khmer Rouge emptied Phnom Penh and sent “new people” like the Panh family to model villages in the countryside, so that they might be remade “in iron.” Instead of iron men, Rithy Panh offers people of earth: all of the characters in The Missing Picture are little dolls made of painted clay, and they’ve all been placed in little sets—model villages, houses, fields, quarries, swamps, prisons, graves. The dolls stand still and unanimated within the scenes, though real rain falls on them and real dirt covers them when they die. They look excruciatingly breakable. This is especially true when the figurines are arranged in front of archival footage of the old Phnom Penh, or propaganda film of revolutionary comrades laboring at a worksite.

Midway through the movie, Ang Saroeung appears as a clay man looking through a clay camera, dressed in Khmer Rouge black, as his own unnerving films play behind him. Such scenes make the figurines look like interlopers in history, like lost toys waiting to be found and carried home by the child who made them. The sense that the whole film is a child’s marvelously realized game doesn’t dissipate when Panh informs us that this doll is his father, this one his sister, this one, a boy in a red shirt, himself; nor does the game end when the toy representing the father begins to starve. Panh was a child in the killing fields, and the horrible, heartbreaking game we’re playing is his; in the middle of what seems like an endless nightmare, the clay doll in the red shirt, the young Panh, sits under a tree and prays that a plane passing overhead will drop a camera down to him.

Thirty years later and in another county, something like that did happen for two Indonesian men named Anwar Congo (thin, grandfatherly, a smooth dancer who smiles often) and Herman Koto (fat, loud, full of bullying theatricality). In 2005, the filmmakers Joshua Oppenheimer and Christne Cynn flew in from America with a proposition: they offered to help Congo and Koto recreate, on film and in any manner they pleased, their memories of the state-sponsored slaughter of somewhere between 500,000 and 1 million suspected communists in Indonesia, which occurred only a decade before the Panh family faced destruction on the other side of the South China Sea. The astonishing documentary that resulted was called The Act of Killing (released in the US in 2013).

The Act of Killing is the The Missing Picture’s natural complement, or perhaps its demon twin. Both films are about Southeast Asian atrocities on opposite sides of the Cold War ideological divide. Both films examine the role of cinema and image-making in mass-murder. Both films present reenactment—a long-scorned tactic of the true crime television documentary—as the only adequate means by which the events might be reckoned with in visual terms. In both films, too, the reenactments are conceived by parties to the disaster. 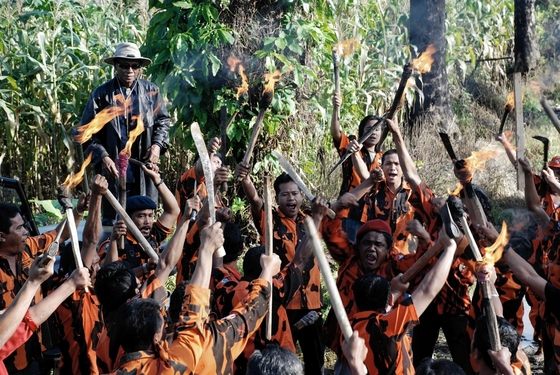 However, in The Missing Picture, the artistic representation of the crime is conceived and staged by a victim. In The Act of Killing, the reenactments are staged by perpetrators. Congo and Koto are preman, or gangsters, and they were with the death squads that effected the 1965–66 massacre in a frenzy of individual murders all over the islands. The figure of the preman draws on a long tradition of social banditry, and was once used to describe freelance traders for the Dutch East India Company; now, the word encompasses those who operate at the seam of state and criminal power. As Congo explains in The Act of Killing, the term is derived from the words “free men.” Congo alone is thought to have been responsible for a thousand murders during the purge. He preferred to kill men by strangling them with wire. Less blood.

The reenactments of those murders, as conceived and enacted by Congo and Koto, are a headlong plunge into the grotesque: there are dancing girls, cowboy outfits, buckets of fake blood, and Koto in a dozen different sets of women’s carnival attire. There is Congo pretending to be a communist’s severed head watching Koto eat his liver out of his stomach. Among the actors, there are survivors playing perpetrators, perpetrators playing victims, and children who can’t stop crying at the end of a take. The film’s climax is a dance number set to “Born Free” and performed in front of a waterfall. Young Rithy Panh would have considered it all in very bad taste. He would have recognized such evil as the kind which is less terrifying for its banality than it is for its camp. The archetype of the war criminal, like much of our aesthetic language around atrocity, was derived from the Holocaust experience; but in this movie, the fanatical yet methodical Nazi and his partner, the list-making bureaucrat, step aside for evil done up in the gaudery of a painted-lady. She is evil dressed in garish colors, baring long and jagged fingernails, her bloody lipstick smeared.

Congo and Koto’s almost complete lack of regret was much discussed after the film’s release, as was the alarming prevalence of former murderers and their associates in the current Indonesian government. This second point accounts for one of the essential differences between The Act of Killing and The Missing Picture: the Khmer Rouge were defeated, and their crimes against humanity have been absorbed into international consciousness as one of the 20th century’s canonical genocides (if you can bear the phrase). But in Indonesia, the “free men” won. They boast of their crimes on state television, and the history of the killings is scarcely known outside the country. 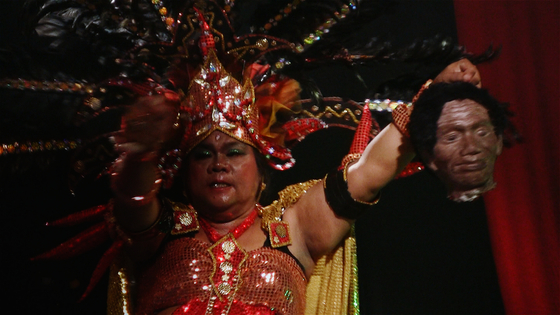 And yet The Act of Killing and The Missing Picture share a common mood. The tone of play is unnerving and almost unbearable, given the subject matter, but in both films, there’s a profound pleasure to be had in making things: in carving clay dolls, arranging them for a family portrait, and covering one with a stiff scrap of fabric when she dies; in fashioning the monstrous costume of the murdered communist who appears in your nightmares; in dressing up, in pretending to be other people, in posing with a dummy and cutting off its head.

This joy in making scenes and photographing them is shared by the survivor Rithy Pan and the killers Anwar Congo and Herman Koto. The mood is no less one of play for being in deadly earnest: to those caught up in the game, all play is for mortal stakes. For Congo and Koto, who aped movie gangsters in their murders, playacting was intrinsic to the killing from the start. To see the “free men” gleefully performing not so much their memories as their fantasies—fantasies in which they, themselves, often figure as victims—can make it easy to forget that their game, what they may even have considered their art, was enacted on the bodies of hundreds of thousands of real men and women 30 years before.

The camera has long been the tool with which survivors ensure against silence. Becoming an artist was how Panh survived his own memories. Whether the perpetrators, as well as the victims, of such crimes are entitled to shelter under the title of artist—to claim a delight in making things, that, like a child’s, never loses the glow of innocence—is a question that fringes the edges of these films about new people and free men, wielding cameras.