Changing Landscapes
The Museum of Modern Art recently completed its 13th annual Documentary Fortnight, a two-week festival of international nonfiction film. In a city flush with film screenings, the Fortnight is notable ... 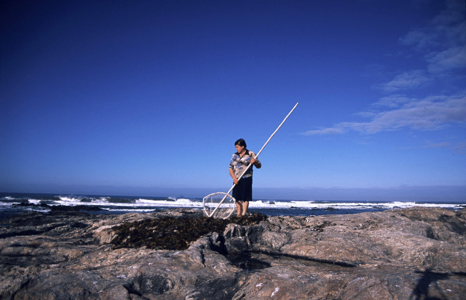 The Museum of Modern Art recently completed its 13th annual Documentary Fortnight, a two-week festival of international nonfiction film. In a city flush with film screenings, the Fortnight is notable for its wide-ranging social interests as well as its commitment to the limits of documentary form. “So much that defines documentary today is about the crisis of the image, what the image can or cannot do,” says Chi-hui Yang, one of the festival curators. The 30 feature and short films that Yang selected with co-curators Sally Berger and Lucy Raven all respond to this crisis, sometimes explicitly but often not. Styles range from understated to boldly experimental, probing themes like protest and resistance, social isolation, and landscapes transformed or perhaps left behind by modernity.

On this last theme—landscape and modernity—two very different films demonstrate the festival’s vision. Gonçalo Tocha’s A Mãe e o Mar (The Mother and The Sea) is a contemplative portrait of a dwindling fishing village in Northern Portugal. Kelvin Kyung Kun Park’s A Dream of Iron is a cacophonous personal essay about South Korean modernization through the Hyundai shipyard in Ulsan. Despite their differences, both create a melancholic, aesthetically provocative document of a site undergoing profound transformations. And both try to connect their viewers to these sites through a sense of the sublime.

A Mãe e o Mar, Tocha’s third feature-length documentary, focuses on a tiny beachfront settlement called Vila Chã. The town once enjoyed modest fame for its unusual culture of female fishing boat captains, and the last remaining “skipper woman,” Gloria, is the film’s narrative focus. Through oral histories, we hear how her predecessors defied their husbands, obtained boat licenses, and spent their lives toiling at sea. Their sense of independence and empowerment is not only inspiring, but also complicates the sense of a village lost in time. Nostalgia for the fisherwomen becomes nostalgia for a liberating modernity that the residents began to create for themselves. Hope has faded and the outside world has left Vila Chã behind.

When introducing the screening, Tocha talked about the film as a “museum” of the village. Yang, the curator, adds that Tocha begins his work by attempting to document his sites in their totality, seeking a panoptic view through multiple cameras. Yet Tocha also repeatedly inserts himself, his crew, and their equipment into the frame, admitting to the film’s artifice and the impossibility of complete understanding. It is a subtle but confident formula.

An obvious criticism of Tocha would be that the work is sedate—Yang described it as a “slowdown at the start.” Its hushed and elongated rhythms contrast sharply with Park’s A Dream of Iron, which boasts multiple shifts in music, pace, and tone. A Dream of Iron, Park’s second feature film, explores South Korean industrialization through a personal story of failed love and religious searching. It weaves elaborately photographed sequences of smelting, casting, and assembling ship components into scenes of public worship, labor unrest, the daily life of workers, and huge whales swimming underwater. Each of these threads has its own camera and editing style, creating a remarkable feeling of aesthetic liberation. When asked during Q&A why he switches in and out of so many different modes, Park answered, “mostly because I am lost.” His searching is vividly embodied in the film.

But it can also seem like Park and his army of underwater, aerial, and crane-mounted cameras are racing the container ship to its bigness. A CalArts alum, the film is inflected with the work of both Allan Sekula as well as James Benning, a landscape filmmaker known for his understated, structural, and inexpensively made works. Benning’s restraint is perhaps ideological—you don’t confront industrial modernity by adopting its scalar postures outright. But as Yang says, despite making a film about the awesome scale of logistics, Park doesn’t reflect on the massive logistical scale of his own production. The film comes to resemble its object of inquiry, and perhaps this is the very crisis of the image—a complicity that even Park’s abundant energy and inventiveness cannot overcome.