Comedy of Faith
“All human nature vigorously resists grace because grace changes us and the change is painful.” —Flannery O’Connor1   Grace is an ideal engine for a play, which must represent people struggling ... 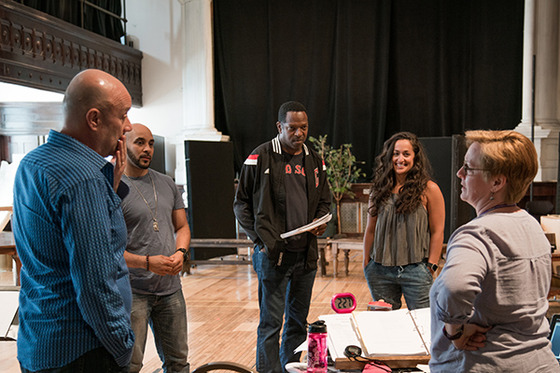 “All human nature vigorously resists grace because grace changes us and the change is painful.”

Grace is an ideal engine for a play, which must represent people struggling towards transformation, whether through marriage or revenge or, sometimes, faith. Flannery O’Connor, as deeply Catholic and embedded in Georgia as playwright Stephen Adly Guirgis is Catholic and embedded in the Upper West Side and Harlem, wrote characters who deny grace. (Her short stories feel inherently dramatic, and in fact three have been adapted—word for word—into plays.) “Human nature is so faulty that it can resist any amount of grace and most of the time it does,” O’Connor told her friend, also a writer, Cecil Dawkins. We can resist grace most of the time, but not always. That’s the stuff of drama.

In Guirgis’s plays, characters live in the edge of grace: their note is coming due. They actively resist, then they painfully change. “And what is ‘grace’? …,” Danny asks at the end of Act One of Guirgis’s The Little Flower of East Orange (2008). The ellipsis creates an awkward pause, and we try to answer the question on our own, whether reading or listening in the theater. Danny, in his 30s, trying to care for both his dying mother and his own deeply troubled self, continues: “Grace, to me, is that thing that I constantly spit in the face of. If there’s a God, he loves me. But I don’t seem to love him back enough. And thus: my life … Grace offered acceptance and good counsel. And I spit in the face of it.”2

Guirgis writes compact, two-act dramas about desperate people, like Danny, uneasily balancing life and faith and death, and his newest play, Between Riverside and Crazy, which premiered in June 2014, won the 2015 Pulitzer Prize for Drama, and was published by Theatre Communications Group in November, follows and develops that pattern. For most of his career, Guirgis—raised on the Upper West Side—worked downtown with Labyrinth Theater Company, where he was co-artistic director. The premieres of his plays there were often directed by Philip Seymour Hoffman. In Jesus Hopped the A Train (2000), inmates at Rikers, separated by a fence and the enormity of their crimes, debate forgiveness and God. The Last Days of Judas Iscariot (2005) stages a trial for Judas (in a Manhattan-accented Purgatory), who, we learn, surely deserved such a reckoning. Though obscene, and probably even heretical in Catholic theology, The Last Days moves its central character, and its reader, from wavering doubt (“Domine adiuva incredulitatem meam”—Lord, help my unbelief—the epigraph of Act One) to belief (“Sic deus dilexit mundum”—Thus God so loved the world—the epigraph of Act Two).3 In the play’s final tableau, Jesus washes Judas’s feet. But even when The Last Days arrives at this moment, the belief Guirgis explores is never untroubled, and that belief is deeper and more pure for its obscenity, heresy, and anger.

How do you love God when you lose everything? That is the mystery of Our Lady of 121st Street (2002), a who-dunnit revolving around the missing body of Sister Rose. The play’s gang of unbelievers—Italian American, Latino, Latina, African American, and white—is drawn back to 121st for the funeral of their old religion teacher, and pulled towards faith.

Many critics thought Danny from The Last Flower of East Orange, a heroin addict and prodigal son, was autobiographical; Guirgis strongly denies it. Like many of Guirgis’s characters, I feel ethnically Christian (but not Catholic): baptized and confirmed, but now a stranger to services—though when I’m there I feel deeply, momentarily, the rituals and chants. And, like many of us, I’ve stood astounded at the strength and courage faith can lend, especially in moments of suffering. I’ve prayed, despite myself. In other words, while Guirgis’s worlds feel far from me, the pattern feels eerily close. How do you love the world while losing everything?

At the beginning of Between Riverside and Crazy, a summer morning has broken on Riverside Drive, but we’re inside a railroad apartment, not down in the park or out by the Hudson. The wife is dead, her absence marked with a wheelchair and by the general decay of the place: the Christmas tree is still up, little piles of dog shit mine the floor. Walter “Pops” Washington, retired cop and “grieving despot King” of the rent-controlled pre-war, sits in the wheelchair, drinking whiskey and eating pie off fine china. In his review of the premiere production at the Atlantic in New York, Hilton Als compared Guirgis to Suzan-Lori Parks and Robert O’Hara, two other mid-career playwrights. The comparison is apt: Parks and O’Hara also write plays that perform the stories of Americans of color, digging up a past that isn’t there, digging at the present. But here at Pops’s kitchen table, we’re more in the world of Arthur Miller’s tragedies of common men.

It’s shocking how religious, and specifically how Catholic, Guirgis’s plays are.

Willy Loman is a retired traveling salesman (Jewish, though it’s apparent only from the environment), re-living a past that never existed, driving towards suicide. Death of a Salesman opens in his kitchen in Brooklyn. August Wilson, an African-American playwright of the generation before Guirgis, whose dramatic world was Pittsburgh, famously argued that Willy should not be played by a black man: in gaining a potential role, African-Americans would lose their history and humanity. Pops is Guirgis’s answer to Miller and Wilson, uptown and black and young enough to be Willy’s son. (Pops’s father was, it bears remarking, a “traveling man.”) He’s a king just as regel and despotic as Willy, trapped by his past. But Guirgis does not write tragedies.

In the despot’s court on Riverside, sponging off him, is Junior, Pops’s petty-thief son. With Junior are his friend Oswaldo, a recovering addict on probation, Junior’s girlfriend Lulu, young and pretty and dumb and sweet, and the couple’s dog, or that little motherfucker, as Pops calls him. For the first act, there’s no movement or change, just painful denial. An old partner from the force, Detective Audrey O’Connor, with her fiancé, Lieutenant Dave Caro, come over for veal and apple fritters, and offer to settle a long-running suit between Pops and the City of New York: Pops believes the city owes him $5 million and a public apology for an incident in which, off-duty and dead drunk, he was shot by a young white cop. New York begs to differ. Pops rejects with prejudice Caro’s offer to settle the disagreement with a few grand and a nondisclosure agreement. “I got an answer right now,” Pops says. “Fuck all a y’all. They wanna hang me from a cross—hang me …. Walter Washington’s a flesh-and-blood, pee-standing-up, registered Republican—.” There is no way forward.

Change comes, as it must, in the form of grace, personified here as a character allegorically named Church Lady. Catholic with a Condomblé necklace (echoing old Africa), she tells Pops that God still loves him—and gives him a heart attack while they make love. There are echoes in the Church Lady of the magical Negro and eternal feminine types: she’s a sexual force for redemption, foreign and mysterious, whispering “always we are free,” which becomes Pops’s motto and liberates him from his past. But she doesn’t actually have any magic, despite the Brazilian Voodoo airs. Their moment together is an accident, and an attempted con. “Whatever the hell happened that night, it got me to here,” Pops says, carrying his traveling bag at the end of the play. “And I didn’t do nothing to deserve it. You gave that to me. You gave me grace.”

In ancient Greek tragedy, the recognition scene at the end of many plays revealed to the characters lost knowledge or their common bonds. This was followed by suffering—think Oedipus, pushing pins into eyes that could never see the truth anyway. In Death of a Salesman, which allowed the American middle class to experience the same pathos of those old mythological kings, the pattern is similar, ending also in suffering, at Willy’s gravesite. But Pops must suffer first, gaining recognition only through that suffering, an acceptance of grace and a renewed struggle with faith. In other words, Between Riverside and Crazy is a comedy.

Members of the younger generation—Junior, Lulu, Oswaldo, the cops—do not fare so well. Guirgis leaves them suffering, in the darkness, trapped without faith or hope for the future: Lulu is not pregnant, as she had announced; Pops demands and receives Audrey’s engagement ring, cursing her marriage. It is highly unusual for a comedy to save the elderly and damn the young. But in Guirgis’s world, they must continue suffering, with their addictions, crushed hopes, and great sins, in order to learn to love God.

It’s shocking how religious, and specifically how Catholic, Guirgis’s plays are: few celebrated contemporary artists use their art to so publicly struggle with a Christian God. For the most part, it seems, we’re not interested in stories of grace. Guirgis is, exploring what it means to feel religious after not only the Enlightenment, but the sexual revolution and postmodernism. Pops will, with the help of Grace, resist and suffer unto a loving God, a relationship attended with long labor and trouble—but that’s what a relationship is—difficult—isn’t it? Guirgis’s comedy is the story of Christ, cast in the aging body of an imperfect Manhattanite, his redemption symbolized by his new love for the little motherfucking dog.

Between Riverside and Crazy premiered with the Atlantic Theater Company at the Linda Gross Theater in New York City on July 10, 2014. It will run at the Steppenwolf Theatre in Chicago from June 23 through August 21, 2016.

Between Riverside and Crazy