Comics Journalism, Comics Activism
It has been a good fifteen years now since our cultural gatekeepers collectively patted themselves on the back for having discovered that comics were “not just for kids anymore,” and in that time ... 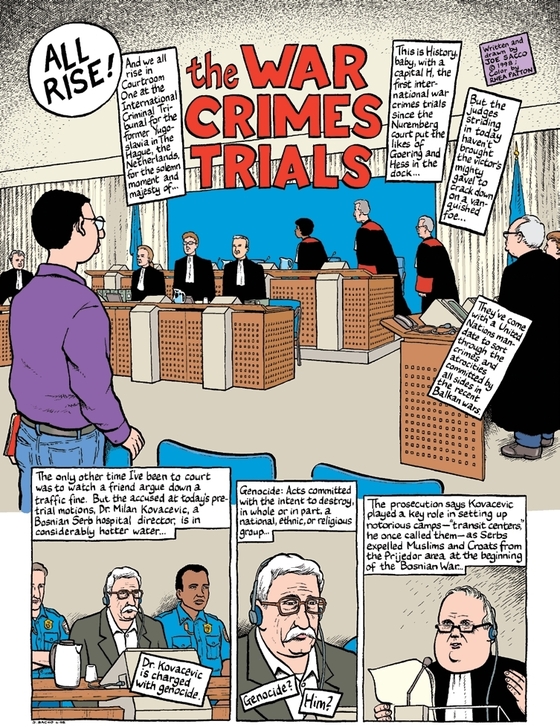 It has been a good fifteen years now since our cultural gatekeepers collectively patted themselves on the back for having discovered that comics were “not just for kids anymore,” and in that time several remarkable achievements in the form have found their way into the critical spotlight. But for every Persepolis and Fun Home that has become the focus of such attention (and landed on high school and university class syllabi alongside the long-time lonesome Maus), the last generation has also seen dozens of major works of graphic literature largely ignored by those who do not buy their books in stores with names like “The Laughing Ogre” or “Forbidden Planet.”

It could reasonably be argued that the most under-appreciated creator working in the form today is Joe Sacco. Despite the awards and accolades his books have earned over the years, the fact that he is not read and studied more regularly alongside what have come to be considered canonical works in graphic nonfiction would be surprising were the reasons for the neglect not fairly clear. Sacco’s work focuses almost exclusively on war zones and the seemingly hopeless plight of the perennially dispossessed, and most American readers don’t like their portraits of despair unleavened by “hope” or easy answers. Sacco, it would seem, is constitutionally incapable of fakery of this kind, even for narrative effect. No wonder, then, that Sacco resists a wholesale critical and scholarly embrace. A year ago, a “short survey of masterworks” of “comic books as journalism” in the Atlantic included not one work by Joe Sacco, the man who all-but-single-handedly defined the genre. The survey’s author, Kirstin Butler, when confronted about the omission, replied that she had “chickened out at the last moment” from including his major work on Palestine “because the topic is so polarizing.”1

Admittedly, Sacco does himself no favors with the critical establishment by offering in two of his major works sympathetic and complex portraits of the Palestinians living under Israeli occupation. His 2009 masterpiece, Footnotes in Gaza, told the story of his own Sisyphean attempt to recover the history of the massacre by Israeli soldiers of hundreds of unarmed Palestinians in Khan Younis and Rafah in 1956. The book interweaves the history of a half-century ago with the events of modern Palestine as Sacco seeks out survivors and attempts to piece together an accurate account of an event that is, as he puts it, a “footnote,” not only for Israel and the West, but for younger Palestinians as well. Like all of Sacco’s work, Footnotes ultimately offers no answers, and certainly not a definitive history of the event he devoted himself to fixing on the page. But its words and pictures reflect brutal and critical honesty towards all the players in this ongoing tragedy, including himself.

Perhaps appropriately, Footnotes itself grew out of an earlier moment of editorial cowardice by a middlebrow magazine. In 2001 Sacco and the journalist Chris Hedges had traveled to the Gaza Strip for Harper’s Magazine, only to see much of Sacco’s art and a long section related to the massacres at Khan Younis and Rafah wind up on the cutting-room floor. It was that lost material that Sacco would pick up and develop over the course of the next decade into Footnotes in Gaza. With the publication of Journalism, a collection of shorter pieces from the past decade, Sacco has a chance to print some of the unpublished images from his 2001 Gaza trip and to speak with candor of the frustrations of working with Lewis Lapham, the editor at Harper’s who bowdlerized the original essay. In fact, Sacco follows up each section of the book—covering stories about Iraq, Chechnya, the war crimes trials at The Hague, India, and his own birthplace of Malta—with personal notes on the successes and failures of the various pieces, as well as his meditations on the editorial processes that shape what can and can’t be done in journalism as opposed to in a relatively autonomous book-length work.

Journalism is a meditation on Sacco’s own experiments with the genre of comics journalism. The power in these short essays lies in the individual voices being written and drawn into life on the page—of the Chechen refugee Zamani, for example, or of Sabbar and Khalid, Iraqi torture victims. In his book-length studies of war and its refugees,2 Sacco often deploys a caricature of himself as an intermediary between reader and subject. In 1996’s Palestine, for instance, “Sacco” is portrayed as overcome by anxiety while walking through the historic Arab market, salivating at the prospect of a “big story,” or struggling to hide his boredom or his distrust from his interview subjects; this Sacco—always represented with thick glasses and no pupils—both provides comic relief in a tragic tale comprising hundreds of pages and thousands of panels and massages the anxieties or boredom of Western readers always in danger of disconnecting completely from experiences so geographically and biographically distant from their own. In the shorter works in Journalism, however, Sacco steps aside as much as possible and lets the people tell their own stories.

I could not help wishing that Chris Hedges had taken a similar approach in Days of Destruction, Days of Revolt, allowing the reader closer proximity to the battlefields being described and pushing the narrator into more of a supporting role. Days of Destruction, Days of Revolt is a collaboration between Hedges and Sacco, but the editorial prose is all Hedges. And in stark contrast to Sacco’s self-critical narrator/persona in Safe Area Goražde or Palestine—uncertain, anxious, and all-too-human—Hedges is certain, strident, and at ease with the grandest of sweeping gestures. It makes for a strange partnership, to put it mildly.

Days of Destruction, Days of Revolt focuses on areas that the authors identify as “sacrifice zones,” places and people immolated in the service of capitalism’s need for profits and resources. Like Journalism, the book is broken down into sections, each focusing on a region of devastation and exploitation; unlike Journalism (or most of Sacco’s work to date) the regions in question are very close to home for a US reader: West Virginia, South Dakota, Florida, New Jersey. Close to home, but also worlds apart—and that is at the heart of the story Hedges and Sacco tell. Two experienced journalists who have spent much of their careers in war zones in Eastern Europe, Africa, and the Middle East here team up to turn their focus to savaged peoples in places like Camden, New Jersey, or Immokalee, Florida, places where the human suffering and injustice rival the most brutal corners of the planet but about which even in-state neighbors are generally allowed to remain blissfully ignorant. 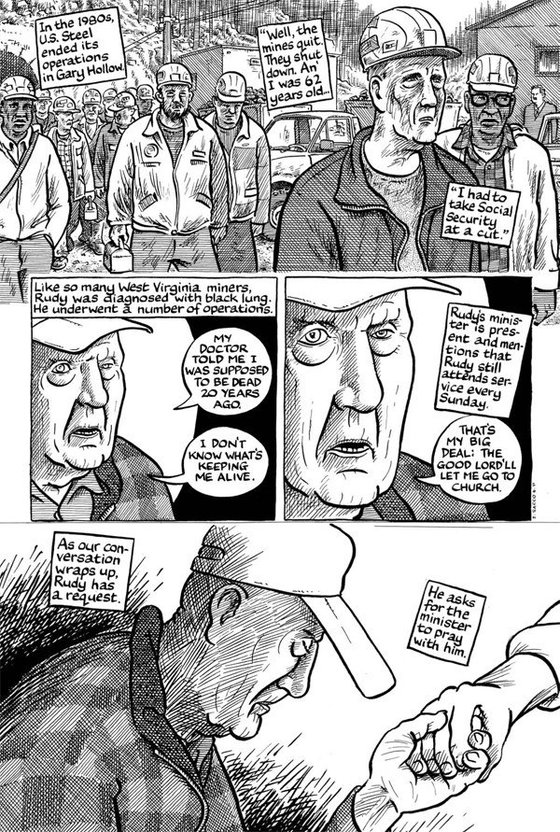 For this reader, the book is at its best when Hedges turns the pages over to Sacco—and when Sacco in turn turns the book over to individual stories. Each of the first four sections of the book includes, in addition to illustrations by Sacco, extended first-person narratives by residents of the sacrifice zones. These tales make Hedges’ arguments more convincingly than he does himself. Hedges ends the book by finding hope and revolution in the Occupy Wall Street protests in Manhattan’s “Liberty Square,” and I for one would not deny him whatever hope he can find in the bleak (and honest) picture that Days of Destruction, Days of Revolt offers; I wish I could share it. But I was struck in finishing the book by his extended assault on the “respectable classes … who are the most susceptible to evil.” “Those who resist,” he concludes, “rarely come from the elite. They ask different questions. They seek something else: a life of meaning.” Leaving aside the emptiness of such pronouncements, if Hedges truly believes them, one wonders why he didn’t step back and give free rein to Sacco’s gift for providing a platform to those who have historically and systematically been denied a voice (or a face) in public discourse. Both in the prose sections and in the graphic-narrative interludes the book is strongest when people other than Hedges are explaining how this brutal game is played, and why.

Together, Sacco and Hedges might just have created a form that can speak across divides unbridgeable without the supplement of graphic narrative.

In the end, the radical disjunction between how Hedges and Sacco approach their subjects is fascinating and instructive. Hedges is at ease with the grand, sweeping Howard Zinn–moments of matchbook history whereby the genocide of the Pequots in the seventeenth century is ultimately and intimately connected to strip-mining in West Virginia or the machinations of Democratic political bosses in Camden. And if sweeping, historical connect-the-dots is your cup of tea, then you will find Hedges deeply moving. But if, like Sacco, you distrust all history that does not have a face, a name, and a voice behind it, you will find more to call you to action in the voices that speak from the decimated landscapes of America’s deepest poverty, which we (like Dickens’s “telescopic philanthropists”) know even less well than we do the sufferings of peoples halfway around the world.

Together, Sacco and Hedges might just have created a form that can speak across divides unbridgeable without the supplement of graphic narrative. But I cannot help but notice that the one section to which Sacco did not (could not?) contribute a first-person narrative was the book’s final section, “Days of Revolt,” focused on the Occupy movement. “This rebellion will not stop until the corporate state is extinguished,” Hedges proclaims. “It will not stop until there is an end to the corporate abuse of the poor, the working class, the elderly, the sick, children, or those being slaughtered in our imperial wars and tortured in our black sites.” Sacco, in his relative “silence” in this concluding section, would appear to voice a reluctant but deep-seated doubt as to whether Hedges is in fact right. And as we sit with the book in late summer 2012, it is hard not to want to shut the book in these final pages to ward off the deafening silence in our public squares.

Days of Destruction, Days of Revolt