Comics versus Franquismo
In the late 1960s, dictator Francisco Franco slowly opened Spain to tourism while continuing to obliterate public memory of the retributions meted out after the Civil War (1936–9). I spent those ... 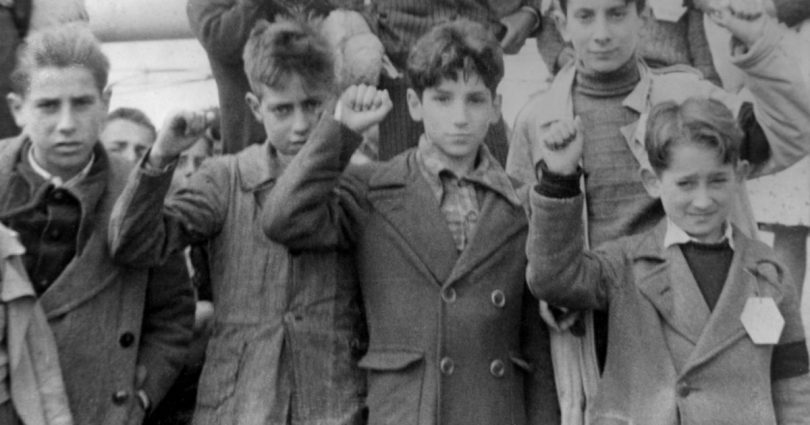 In the late 1960s, dictator Francisco Franco slowly opened Spain to tourism while continuing to obliterate public memory of the retributions meted out after the Civil War (1936–9). I spent those years studying in Madrid, living for two semesters with a Spanish family. My professors were among the most distinguished of those who hadn’t sought exile abroad, yet even they were careful to avoid the missteps they had seen hobble the careers of their more activist colleagues.

My leftist university friends, some from “red,” or Republican, families that had suffered terrible reprisals, taught me more about contemporary Spanish history than I learned in classes. Their attempts to protest and strike were quickly repressed by Franco. Some, like the son of the family I lived with, feared arrest, or worse. The long arm of Franco and his henchmen still brandished an iron fist.

Decades later, in 2007, the passing of the Historical Memory Law by the Spanish Chamber of Deputies acknowledged and gave legal rights to the victims of franquismo. The law allowed, for example, the recovery of bodies from the mass graves first opened in 2000, by a volunteer group called the Association for the Recovery of Historical Memory. Also in 2007, cartoonist Carlos Giménez published a compendium of his autobiographical comics series, Paracuellos (1976–2003), which told the stories of children confined in Social Aid Homes after the Civil War, most of them children of “the vanquished.”1 Giménez’s work first appeared in 1976, during the creative outpouring that characterized the cultural landscape of Spain a year after Franco’s death. But, unlike the post-Franco hedonistic cultural wave La Movida, defined by Pedro Almodóvar’s decree to “make films as if Franco had never existed,” Giménez told stories of a past that some wanted desperately to remember.

Interned for eight years in several Social Aid Homes, Giménez had ample personal experience of his subject. His father died when he was a year old, and his mother suffered from tuberculosis, resulting in long hospitalizations. Giménez and his brother were sent off to Social Aid Homes, where staff comprised of right-wing Falangists, priests, and professionals were recruited to put the stamp of Franco’s ultra-conservativism on the young and vulnerable.2 These institutions were key elements of social control in Franco’s long-term plan to eradicate all opposition through indoctrination, incarceration, exile, and even execution.

Published in English by EuroComics and translated by Sonya Jones, Giménez’s Paracuellos: Children of the Defeated in Franco’s Fascist Spain gives English-speaking readers the opportunity not only to witness but also to take part in this act of recovered historical memory. In the first of two parts, he filters his drawings through the point of view of various child narrators in episodic, nonchronological vignettes. The multiple narrative voices—first person, first-person plural, and, in part 2, third-person omniscient—give depth and complexity to the testimonial nature of the text; they tell the stories of boys interned in different homes who experience similar oppression. 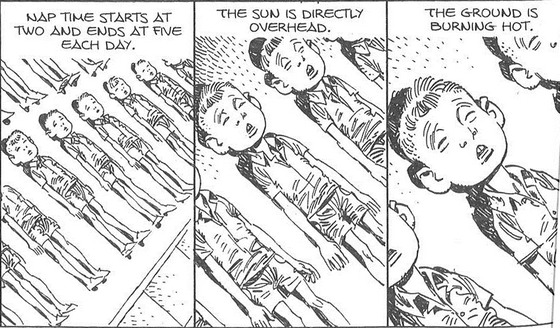 Confinement to a home meant subjugation to physical and mental control at the hands of the tyrannical “victors,” who imposed startling regimens of degradation on the internees. In one example, boys, arranged like sardines in a can, are forced to take three-hour siestas outdoors on the burning flagstones under the direct rays of the summer sun. When one of them moves, coughs, sneezes, or laughs, he must do round after round of squats. Giménez’s frame captures close-ups of one after another, emphasizing the commonality of their suffering.

Scott McCloud has noted how comics allow readers to act as participants in the story; sketching a face with a few strokes becomes an opportunity to fill it with meaning. The “gutters,” or white spaces between panels, as well as the fragmentary nature of the visual field, produce “closure” in the reader’s mind by enabling readers to observe parts while perceiving a whole.3 Similarly, Giménez’s Paracuellos makes us not just passive readers or witnesses but participants in the story. Some of the power of Paracuellos, as with Art Spiegelman’s Maus and Marjane Satrapi’s Persepolis, rests on how he provokes our discomfort when we are asked to fill in the blanks, to become part of a horrifying story, in this case of the degradation of young boys in the name of God and the dictator.

Giménez’s choice of black-and-white for his drawings underscores the memories of a sinister past, depicting “the children of the defeated” as undergoing all manner of torture and pain, including hunger, thirst, and abuse. Learning from the brutality of the fascist men and women who run the homes, some boys replicate the bullying. The first comic in the series depicts two starving internees rummaging through garbage. When they’re discovered by an older boy, he insists they beat each other. This vignette sets up the visual power dynamics: the bully towers over the boys, wielding his belt. In other moments, a sole boy might be seen cowering in the corner of a panel or hemmed in by blackness.

Extreme close-ups focus on the grotesque faces of the children’s keepers. The expressions of priests, nurses, staff, and teachers fill frames with menace and violence, dominating the claustrophobic space the boys inhabit. Visual irony is played out in the juxtaposition of images. The boys laugh when one of them can’t hold his urine; meanwhile, a Falangist instructor lectures them about “carrying on with the honor of Catholics and Falangists, half monk and half soldier, our chests swelling with patriotic pride, our triumphant blue shirts with the yoke and sheaf of five arrows embroidered in gold.”4 Their laughter brings the indoctrination session to a brutal close when the instructor strikes the boy and forces him to run on all fours. 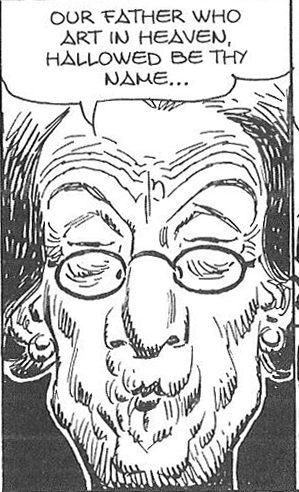 In the dedication to the second part of Paracuellos, Giménez names dozens of the boys he knew by nickname or family name, now grown men, with whom he was interned. This naming, this refusal to accept the so-called Pact of Silence of the post-Franco era, emphasizes the historical weight of the text.

… to my good friend Juan Manuel Escribano, who had great big eyes that made more than one school-mistress into his patsy; to his brother Goyo; to José Luis Muñoz, who had a gorgeous mother who was an artist. I’d really like to see him again because I still have enormous affection for him. To his brother Gumersindo Apolinar, who was the bugle boy; to the elder Gálvez, who was always drawing comics, and, since he couldn’t draw faces at all, invented characters without heads, such as “The Headless Man,” “The Invisible Man,” “The Hooded Man,” “The Man in the Diving Suit” … ; to “Demon,” who cut his finger with a razor blade to be like the martyrs in the religious books; to “Pirracas,” who ate flies and beetles and whose head was always buzzing …

In the second part of the book, the multiplicity of narrative voices is replaced by a single third-person narrator; at the same time, the claustrophobic panels of the first part open up as the boys claim more visual space and doors open to other characters from the outside. Their keepers are still sadistic tyrants—one child is beaten relentlessly for having told how he was molested by one of the teachers. But he manages to escape with the help of his brother and his friend Pablito.

Paracuellos, in the original and in Jones’s skillful translation, claims the authority of the oppressed and gives comics the transformative power of truth telling. Published soon after Franco died, the comic strips brought to the national consciousness an era that had been suppressed in official franquista histories. In retracing the abuses of the period, Paracuellos reveals the tensions around contested versions of history that still occupy political debates in Spain.

Paracuellos: Children of the Defeated in Franco

Carlos Giménez, edited by Dean Mullaney and translated from the Spanish by Sonya Jones
EuroComics, 2016
Buy