Crossing the Line in Baltimore
This is the latest installment of Public Streets, a biweekly urban observations series curated by Ellis Avery. Greenmount Avenue is a historic Baltimore street running downtown to the Inner Harbor ... 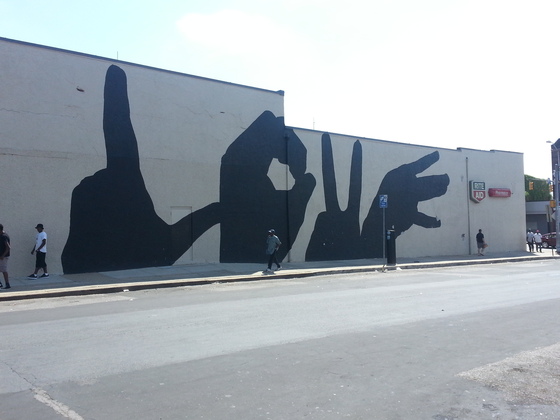 Greenmount Avenue is a historic Baltimore street running downtown to the Inner Harbor and north to York, PA. There’s a famous cemetery and several renowned churches with congregations and choirs from across the city. The northern section between 33rd and 39th St. is my neighborhood: I met my partner in 1989 at a Chinese restaurant at Greenmount and 33rd called Uncle Lee’s, the night of the San Francisco Earthquake. We frequented the neighborhood because of its gay dive bar, and because our favorite video rental store, Video Babylon was there, and because of 7th Story Books, and because of Hechingers, an old-style hardware store, and because of the slightly mannered tea room (which involved real china, and hostesses in kimonos and turbans, and scones) where we had our first date. Sometimes we went to the Food Co-op, dedicated to the idea of whole foods before the term got copyrighted. Many of the clothes we wore came from the Greenmount Avenue Goodwill. There was also a Woolworths, and an army consignment outlet. Memorial Stadium stood a few blocks away on 33rd St. Its closure in 1991, and demolition a decade later following a series of failed redevelopment initiatives, brought about a rapid withering of neighborhood business, and a new phase of white flight.

Ten years ago we moved back to a house about five minutes from Greenmount, closer than we’d ever lived to it back then. The difference now is that we have to walk through a gate in order to get there. It makes a very big difference.

Some of the businesses from our grad school days still exist. Some, indeed, are famous—Pete’s Grill, where you will wait a long time for breakfast Saturday and Sunday mornings; Normal’s, one of the best independent used book stores, with a world famous performance space called the Red Room. There are new things: a halal butcher, for example. And people come from across the city for the Waverly Farmer’s Market on Saturday mornings. One Saturday morning three or four years ago I dropped off a bundle of shirts at the dry cleaners at 33rd and Greenmount. The girl I talked to asked me why I was carrying bags of vegetables, and I said I’d just bought them at the farmers’ market. She looked at me, frowning: “What market?” I said “the one over there, around the corner from Pete’s Grill.” She said she’d “never heard anything about a market over there.”

It’s a bustling neighborhood, still. More though in the line of fast food, lake trout, crabs in bulk, beauty salons. You can smell the Old Bay seasoning from my house. A couple of years ago I’d see a skinny guy playing a flute outside a flower shop, his business. In a downpour one February 14th around 5pm when I needed that kind of gift, I sought him out. I bought from him a couple of times, although his store didn’t seem especially well stocked with flowers. I was told that he was reputed to be a “watcher” for the neighborhood, although my sources couldn’t agree on whether he worked for the police or for Johns Hopkins University, the biggest real estate holder in the area. 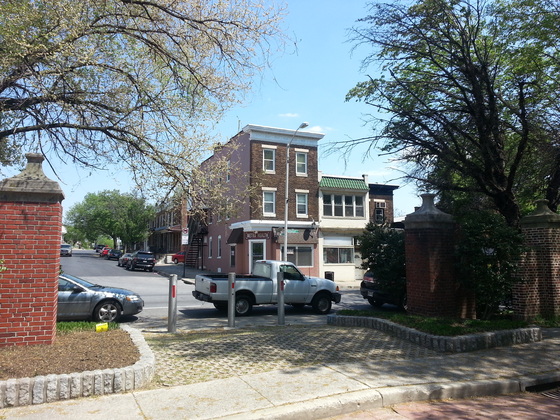 It was always a bit like this, but more so in recent years: there’s a line. Everyone knows when they are crossing the line. It’s almost a ritual, when it happens, and mostly positive. On Halloween, some of the moms from Waverly bring their dressed-up little kids across the line, into Guilford, for Trick or Treat. During the winter, boys come over with snow shovels to clear the Guilford sidewalks. It all works nicely except when it doesn’t. Three years ago on Halloween I had two guests walking towards my house through Guilford. In a dark part of the street where some bushes grow, they were set upon by a group of teenage boys who kicked them and beat them with sticks. The parents with the Trick or Treaters said, “Ohh, are those kids giving you a hard time?” I was furious; I also get it.

Boys from Waverly sometimes walk in a group through the Guilford, or ride their bikes in a posse. One or two of them wave and shout hello. Last month, in the days leading up to the funeral of Freddie Gray, this happened every afternoon after school. Following the turmoil of April 27, reports circulated that a couple of businesses—a shoe shop, a convenience store—had been looted: 24 hours later I could find no trace of that. Things were back to “normal.” A young man chatted with me about the World Malaria Day t-shirt I’d forgotten I was wearing. He was a rapper, selling CDs of his own music.

Some time ago, when I tried to go to talk to a neighbor on Greenmount, to talk about the huge dog she leaves barking in the yard all day and night, I crossed a line. She didn’t want to know that I couldn’t sleep because her dog was barking, and that I preferred talking to her to calling the police or Animal Control. She said: “Are you going to get off my property?” I said: “I will when you listen to me.” She seized the collar of my coat, dragged me down her front steps, and pushed me out her gate, swearing all the while. Her neighbors sometimes complain to the police about the dog, but they are clearly frightened of her. Three years later, even as I write this, the dog’s massive bark resonates in the alley. I can see him as I go to close the window on this beautiful spring day. I plan to be here for life, but if there’s one thing that will make me leave the neighborhood, it will be this.