Democracy’s Candide
The atrocity last month at the Paris office of Charlie Hebdo reminds us that a free press is as basic in France as it is in the United States. This is one of the freedoms Marie-Joseph Paul Yves Roch ... 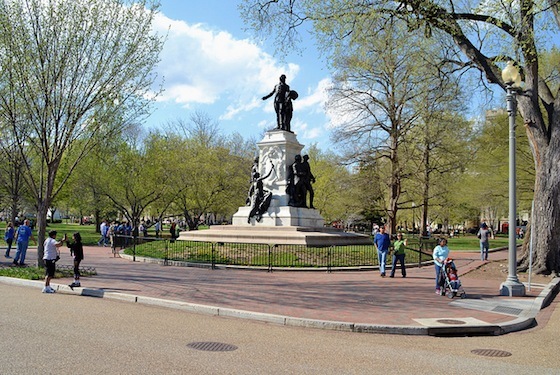 The atrocity last month at the Paris office of Charlie Hebdo reminds us that a free press is as basic in France as it is in the United States. This is one of the freedoms Marie-Joseph Paul Yves Roch Gilbert du Motier, the Marquis de Lafayette, urged his countrymen to adopt in the early days of the French Revolution, drafting the relevant language with the help of the American plenipotentiary Thomas Jefferson and including it in the Declaration of the Rights of Man and of the Citizen. It was the young aristocrat’s instinct to defend freedom that brought him to defy his family and king and set sail to the American colonies in 1777 to join the fight to defend the principles in the Declaration of Independence. And it was in recognition of these military and diplomatic contributions to our revolution that President James Monroe asked Congress to invite the Marquis to revisit the United States almost 50 years later.

The charismatic Marquis returned in 1824 as the “Nation’s Guest.” Traveling back and forth through each of the 24 states, he left in his wake towns, boulevards, and public squares bearing his name from North Carolina to Indiana, Washington, DC, to New York City. Wherever he went during his 13-month visit crowds greeted him. He saluted Americans at parades, banquets, and pageants, listened to speeches recalling his valor in the Battle of Brandywine and his loyalty to Washington in the brutal cold at Valley Forge, and he gave speeches in response.

When he reached the Capital, he graciously accepted the gift of $200,000 in stock and 24,000 acres of land that Congress had voted in gratitude for his contribution to the defeat of England in the American Revolution. Like Candide, the literary figure to whom the Marquis bore an uncanny resemblance in his persistent optimism, the visit convinced him that the United States was, though imperfect, among the best places in the world.

In The Marquis: Lafayette Reconsidered, Laura Auricchio, a historian at the New School, describes vividly and critically the roller coaster of Lafayette’s successes and failures. He was a nobleman of enormous wealth, among the richest men in France when he left for America. He was also an orphan, nourished on heroic tales of his lost father’s military feats and possessed of an almost medieval desire for glory, which, Auricchio is careful to explain, was for her subject something quite different from splendor. For Lafayette, glory meant a reputation achieved through “virtue, merit, great qualities, good actions and beautiful works.”

She introduces the Marquis as a child in the rural Auvergne region of south-central France, remote from the court at Versailles. By dint of a series of unexpected deaths, he became heir to an enormous fortune in his teens and was then sent to school in Paris to get the education he’d need in his elevated position. Then, intent on following his father’s example, he had strings pulled to be able to enter his regiment near the town of Metz. That is where he learned about the struggle in the American colonies against tyrannical England, and discovered the Freemasons. As soon as he could he joined the brotherhood, membership in which would win him the friendship of Franklin and Washington, also members. Inspired by the Declaration of Independence, he decided to join the struggle.

The Marquis was 19 when he left his family and bought and outfitted a ship to sail west. After two months of miserable weather and intense seasickness, he arrived on the coast of South Carolina in June 1777. Determined to meet General Washington, who was already legendary, he found his way to Philadelphia and offered his services, pro bono. Auricchio tells us that Washington, besieged by French volunteers expecting high ranks and compensation, wanted none of them. Franklin, however, had sent a heads-up about Lafayette to Washington, who accepted the young Marquis right away and soon awarded him the rank of general.

In the fall of 1777 Lafayette fought at the Battle of Brandywine, where he saved a wounded soldier in his command, all the while bleeding from a bullet wound himself. Rising rapidly in Washington’s respect and affection, he remained at his side at the Delaware during that bone-chilling winter. He bravely acknowledged defeat after beginning a misbegotten effort to retake Canada, which had been negotiated away at the end of the French and Indian War, and he continued fighting. During a return visit to France in 1778 he saw his wife, Adrienne, and baby daughter, and fathered his only son, George Washington Lafayette. He also went to Versailles, where he helped convince Louis XVI to provide the Americans with a great deal of money and troops, contributing to the victory at Yorktown.

Lafayette’s letters reveal intimate friendships, but also his struggles, as a French aristocrat, in advocating his revered democratic values at home. Auricchio is especially strong on describing his unique relationship with Washington, with whom he was in constant epistolary contact long after the battles ended. Washington sent Lafayette, for his opinion, a draft of the Constitution in 1787, which Lafayette faulted for lacking a Bill of Rights. Their friendship was openly close and filial. The younger man had never known a father, the older never had a son.

Auricchio expresses hope that one day Lafayette’s own countrymen will recognize his historic stature.

The Marquis takes us to Paris as the Bastille fell to the mob, and chronicles in powerful prose Lafayette’s peril and trials during the rise of Robespierre, his escape from the Terror after learning his name was on the dreaded list, and his capture at the hands of the Austrian army after crossing the border into present-day Belgium. She recounts his years in the dank dungeon at Olmutz, in today’s Czech Republic, where, eventually, Adrienne and their daughters joined him. It was not until 1797, as Napoleon flexed his tyrannical muscle, that the Marquis and his family were released to live in Denmark. As an émigré, he was forbidden by French law to return to France or to regain any of his property. But the following year Adrienne convinced Napoleon to allow her to regain possession of La Grange, the château and estate outside of Paris that had been part of her dowry; the Marquis agreed to live there as a gentleman farmer.

Auricchio is a fine guide to the customs and habits of the Ancien Régime nobility that she uses to explain the Marquis’s behavior. Much as he adored his wife, the Marquis had many affairs, at least one of which, seen from evidence unearthed by Auricchio, ended in the cuckolded husband’s suicide. This evidence of Lafayette’s “feet of clay” highlights the difference between the mores of the grateful nation that idolized him and the nation that was his by birth, an example of her titular “reconsideration.” Americans in the early 19th century did not inquire into the elderly widower’s love life.

After Adrienne’s death in 1807 and the defeat of Napoleon soon afterward, Lafayette returned to the public arena and won a seat in the Chamber of Deputies. When he lost that seat in the election of 1823, he wrote to Monroe suggesting he visit the United States. In response, Monroe, an old friend, asked Congress to invite the Marquis to revisit the United States as a prelude to the nation’s 50th-anniversary celebrations.

The reception was overwhelming. Lafayette met old friends and saw new wonders, like the still-incomplete Erie Canal and a steamboat on the Mississippi. But the United States was not for him. Despite pleas to remain, and offers of acres in Florida, he returned to La Grange. There he built an idealized version of an American farm, complete with imported deer and American flowers and trees. The château remains today; the farm is gone but the cherry trees, possibly a gift from Jefferson, were still thriving when I visited in 2012 while doing research for a history of American optimism.

Auricchio bookends her biography with special visits. At its start she goes to Versailles, where a curator tracks down Houdon’s dusty bust of the Marquis for her but wonders aloud why she is interested in the inconsequential man. She concludes at the chapel at Picpus, the cemetery in Paris near the site of the guillotine. There Lafayette lies beside Adrienne, who chose to be buried near the bones of her mother, sister, and grandmother, whose mutilated bodies were tossed in a pit along with those of other victims. His grave is covered with soil from Bunker Hill. The author learns from the nun in residence that it is only Americans who come to pay respects. Elsewhere Auricchio expresses hope that one day Lafayette’s own countrymen will recognize his historic stature. But that is naive, perhaps. The French have more than their fair share of gigantic historic figures, including two Napoleons and one de Gaulle. The Marquis may best be remembered as a great hero of the American Revolution, who happened to be French.