Diane Arbus and the Power of Cruel Art
“What you notice about people,” Diane Arbus said, “is the flaw.” Arbus turned flaws into great photographs. During the 1950s and ’60s, she pointed her camera straight across polite social boundaries ... 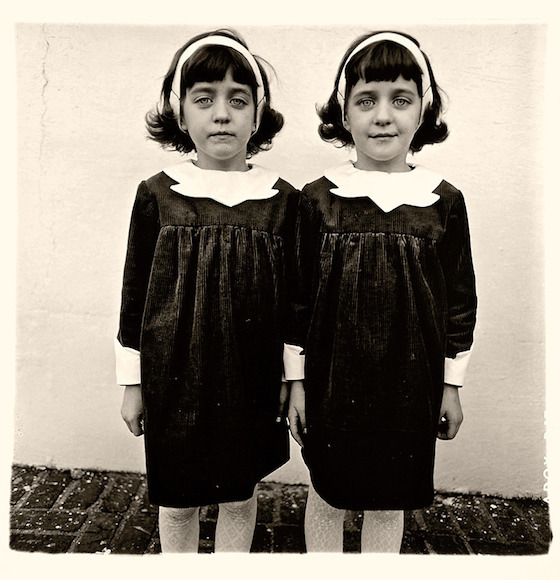 “What you notice about people,” Diane Arbus said, “is the flaw.” Arbus turned flaws into great photographs. During the 1950s and ’60s, she pointed her camera straight across polite social boundaries, at dwarves, nudists, disturbed children, the ugly, the afflicted, the uncertain, the caught-off-guard. What kind of person could work so intensely, for so long, on what most of us ignore, disdain, or recoil from? Someone, Arthur Lubow’s new biography of Arbus tells us, who hardly had any defenses around herself.

Many artists lead boring lives, and many artist biographies are correspondingly dull. Some artists just work most of the time. Their passions, intelligence, and quirks are all in their work; they live at a distance from what they produce. Lubow gives us an Arbus who lived her art. From a very young age, she lacked, or could not develop, the boundaries with which most of us, for better or for worse, separate ourselves from the rest of the world.

Take sex. Arbus herself said she had sex with anyone who asked. She also, by all accounts, did a lot of asking herself. She picked a husband at the age of 13. Just as the mother she despised had done a generation earlier, Diane Nemerov (as she was born) was childishly determined to marry one of her father’s employees.

Sexual boundaries were only the most personal ones Diane Arbus seemed to disobey. She made a career out of photographing what she considered to be beyond all sorts of pales. She did not approach her subjects secretly, or at a distance. Her camera was big, heavy, and hung around her neck, along with her lighting apparatus. She had the courage to get close to her subjects and talk to them. She often went to their homes, meeting them on their own terrain.

To his credit, Lubow takes it all in stride. He writes with detached neutrality, in evenly paced prose. About Arbus’s relationship to her brother, for example, he writes: “She revealed in those [therapy] sessions that the sexual relationship with Howard that began in adolescence had never ended. She said she last went to bed with him when he visited New York in July 1971. That was only a couple of weeks before her death.”

Chapter by chapter, as well as sentence by sentence, Lubow’s pace makes his book easy to read. His biography of the artist is long, 734 pages, but its 85 chapters are conveniently short. They take us through a life spent almost entirely in New York City, from Arbus’s birth in 1923, through her cosseted childhood, rich in department-store money and poor in parental love; her marriage to Allan Arbus; their collaboration on fashion photography; her break with both Allan and fashion; a gradual rise to professional artistic acclaim; her suicide in 1971. After financial support from her parents and husband tapered off, Arbus was chronically short of money. We may find it ironic that Arbus sold prints of pictures like Twins for $100, whereas a year ago a print of Twins sold for $602,500.

In each chapter, despite its brevity, Lubow gives us a manageable dose of chronology, factual detail, psychological commentary, technical explanations about camera equipment, printing, or display, and insight into the history of photography. In Chapter 66, for example, among the many facts and insights delivered in rapid succession, we learn exactly where and when Arbus started photographing people with Down syndrome in the summer of 1969. Lubow quotes Arbus’s startling language; she wanted subjects who were “idiots, imbeciles and morons (morons are the smartest of the three), especially the cheerful ones.” Quickly switching to a neutral technical point, he tells us that around the same time Arbus stopped printing black borders around her photographs and started to use thin soft cardboard brackets “that she taped around the opening on top of the negative carrier, to give a blurred and irregular edge to the image on the print.” By the end of the chapter, we learn that in the late 1960s other photographers began to gain fame by publishing entire books of their work.

It helps that Arbus pronounced many a clever aphorism about photography. One acts as the biography’s epigraph: “A photograph is a secret about a secret. The more it tells you the less you know.” It also helps that Lubow worked hard for 12 years to locate unpublished accounts by Arbus’s exceptionally perceptive and articulate friends, lovers, and family. Pati Hill, one of Arbus’s longest-lasting friends, told Lubow: “She was certainly the most prying person I’ve ever known, with an almost pathological need to have it all.”

The only thing missing from Lubow’s biography is a keen sense of photographic form. When Lubow describes an Arbus photograph, he tells us all about its content, and even about how it was made, but not much about how it looks. We’re not left with a sense of the photograph’s visual power. Anyone seeking a poetic evocation of how an Arbus picture looks should turn to Silent Dialogues: Diane Arbus and Howard Nemerov (2015) by Alexander Nemerov, the photographer’s nephew and the poet’s son.

Most authors, even art historians, compensate for the difficulty of translating the visual into the verbal with reproductions of the pictures they describe. Lubow doesn’t, and it’s not his fault. He lists the photographs he will talk about at the start of his book, and readers can find the pictures online. Lubow reveals laconically at the end of his book that he was not given permission by Arbus’s estate to reproduce the photographs. Anyone who has wanted to publish about Arbus, even the most serious academic photography historian, knows how restrictive the Arbus estate has been. Texts have had to be vetted, interpretations renounced, and photographs under discussion switched.

A new phase in the history of Arbus’s reputation has recently begun, not only with Lubow’s lucid biography, but also because the photographer’s archives were given to the Metropolitan Museum of Art in 2007 by Arbus’s daughters, Doon and Amy. Earlier this summer the museum opened an exhibition of Arbus’s photography at its Met Breuer location. Its title, In the Beginning, misleads. All the most iconic Arbus photographs are on display, including work made in 1970, the year before she died. Perhaps other titles would have exposed the absence of Arbus’s most problematic work, which includes the photographs of people with Down syndrome. For those who want to grapple with that extreme difficulty, Silent Dialogues is, again, the place to go.

As soon as you enter the exhibition, you are faced with a forest of thin grey slabs. Each one displays a single photograph. Isolation helps you concentrate on each photograph and heightens the spatial magic of Arbus’s aesthetic. To a degree exceptional among photographers, the impact of an Arbus photograph depends on a real relationship between you and it. It (we have to remind ourselves in our digital, scale-free era) is the size of an analogue-photography paper print. In her images Arbus generated tremendous tensions between near and far, detail and mass, that tug toward the photograph surface. That same pull works on you from the other side. Yet you are the one who can still move away, especially now at the Met Breuer, where the installation encourages you to weave back and forth, whereas the usual gallery wall hanging cues lateral motion. 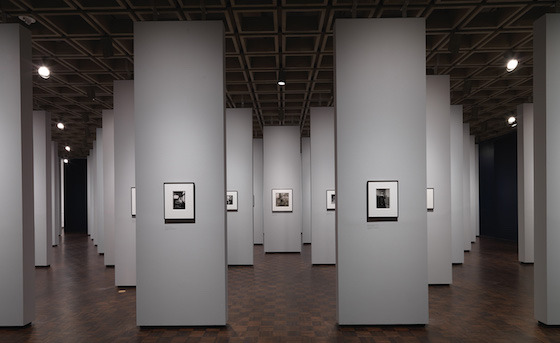 In contrast to the grey slab space, the Met devotes a calm white cube to Arbus’s 1970 Box of Ten Photographs: her way of doing a book. Hoping to boost sales, Arbus assembled her 10 favorite photographs in a plexiglass box that could double as a frame. Her choice turned out to be astute, because it pretty much predicted which photographs would become her most famous, though she sold only four boxes. Nine of the 10 box photographs are on display with the box, including Twins. (And the 10th is in the first exhibition space.) I’m thankful to Lubow for drawing my attention to the identical and identically placed hairpins worn by the twins. He tells us how much Arbus liked that detail. Seen in person, it’s the pins, reflecting light, that click zones of black and white into place with their tiny zigzag.

The father of the identical twins thought it was the “worst likeness of the twins we’d ever seen”; one subject said her portrait “ranks up there with the worst things that ever happened to me.” Arbus simply wore down anyone whose flaw was not immediately apparent, with endless hours of posing, till boredom or annoyance cracked them. The closer she approached her subjects, the closer her subjects feel to you in her photographs. Yet that very literal closeness often created warped spatial and lighting effects that distorted her subjects optically. Arbus sought to make her subjects look alien.

Though she lived her personal life without boundaries, her own work perpetuated social boundaries. Lubow reveals that Arbus’s fascination with her subjects was perfectly compatible with something verging on contempt, certainly a conviction about difference. She called her subjects “freaks” and “hideous”; she said they were not like her, not like her friends, not what she wanted her children to look like. No wonder she was wracked with recurrent self-doubt; she was much too smart not to notice the flaws in herself.

In the liberal democracies of the early 21st century, we aspire to assuage everyone’s sensibilities and treat no one as an “other.” I am reminded of a three-step speech protocol written on the windows of a Los Angeles private school: “Is it true? Is it kind? Is it necessary?” Arbus’s photographs may be true, but they are not kind, and only necessary to the extent that we believe unkind art is necessary.

Can we rationalize that cruel art forces us to see the error of our ways? Does beauty ease us into admission of our faults? Does revealing something marginal eventually make it less marginal? That would be nice, even kind. I wonder, however, after reading Lubow’s biography, whether what is true in Arbus’s photographs is less about her subjects, and more about us. Arbus’s photographs at the Met Breuer show us the power of our cruelty, rendered as beauty.

Diane Arbus: Portrait of a Photographer

Diane Arbus: In the Beginning