Durham and the Art of Cool
May 2016 in downtown Durham, North Carolina, was marked by two weekend music festivals, the Art of Cool and Moogfest, which were presented in the ... 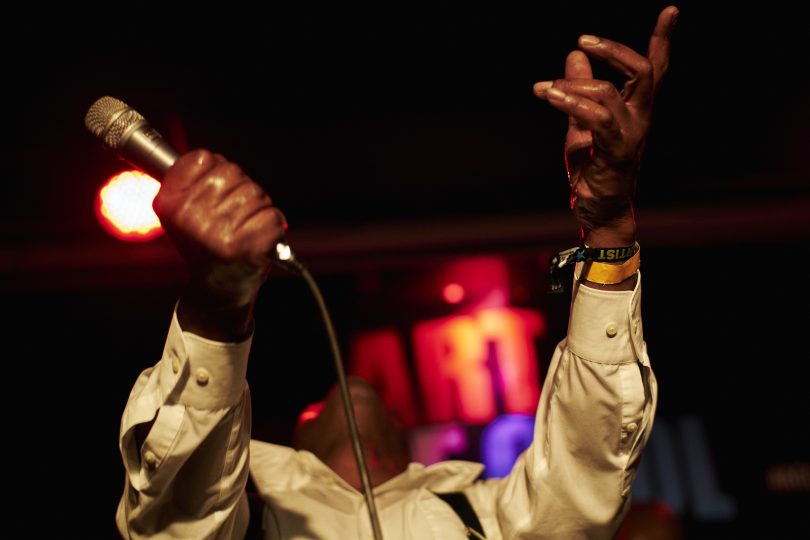 This is the latest installment of Public Streets, an urban observations series curated by Ellis Avery. The text that follows is by Sam Stephenson, while the documentary video below is by Ivan Weiss.

May 2016 in downtown Durham, North Carolina, was marked by two weekend music festivals, the Art of Cool and Moogfest, which were presented in the same theaters and clubs only two weeks apart. That month also featured Bimbe (pronounced bim-bay), an annual African American cultural festival that began in 1969. Once celebrated in Durham’s downtown, Bimbe this past year was held in the gravel parking lot of an outskirts park on the same weekend as Moogfest. Art of Cool features mostly black artists and audiences, Moogfest white, and Bimbe, funded by the city, almost entirely black.

Art of Cool was forged in 2014 by a young African American biostatistician, Cicely Mitchell, who by day analyzes clinical trials in the robust biotech industry of Raleigh-Durham’s Research Triangle Park. By nights and weekends, and for no income, she runs Art of Cool, blending jazz with hip-hop and modern soul in an effort to liberate the presentation of jazz from its entrenched archival and cerebral strictures. The festival has an annual budget of around $350,000, a portion of which has come out of Mitchell’s pocket, totaling around $85,000 over the past three years.

Moogfest, by contrast, has muscular corporate backing and a budget estimated to be in the range of $1.5 to $2 million per year. Billed as a “synthesis of music, art and technology,” the festival honors Bob Moog, the late pioneer of musical synthesizers. Moogfest was founded in New York in 2004, and its last few iterations ran in Asheville, North Carolina, home of the Moog’s laboratories. Moogfest was brought to Durham in 2016 by a consortium of Moog executives and Durham’s civic and commercial leaders, seeking connections with the burgeoning local high-end tech scene.

The back-to-back appearance of these two music festivals in downtown Durham exposes divisions that all of America can’t shake. It was only after local media revealed in the spring of 2016 that the city and county of Durham were giving Moogfest $125,000 that public pressure resulted in Mitchell being granted her full request of $40,000 for Art of Cool, instead of the $5000 Durham originally gave her. These funding decisions left many Art of Cool patrons wounded. (Bimbe received $55,000 from the city last year).

The politics involved here are complicated. Durham’s mayor of 16 years is black. Three of six on the city council were black, while two of the whites were considered among the council’s three most progressive members. “I don’t believe anyone was out to shortchange Art of Cool intentionally,” said Mitchell, “but what happened shows how much we have to work to get proper consideration.” 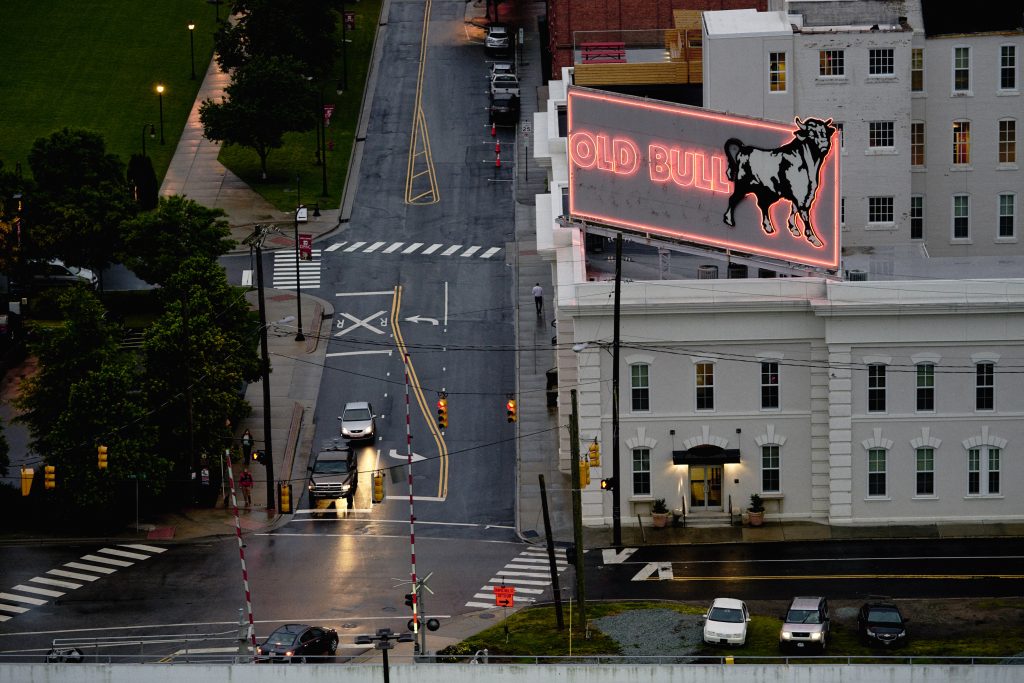 Few could have foreseen the explosive growth in Raleigh-Durham over the past two decades, especially not in Durham’s downtown, which was mostly abandoned by the moneyed class until recently. In 2001 my nephew, then a high school senior from Pittsburgh, was picked up at Raleigh-Durham airport by Duke undergraduate admissions staff—he was visiting for an interview—and as they motored past Durham’s downtown on the freeway, he was told, “Don’t worry about what you see there, it’s a place you’ll never go.” People argue over how to describe what’s happened since then. Pick one—revitalization or reinvestment or gentrification or serial displacement—or all. Three new boutique hotels have opened in the past two years in downtown Durham. Hip restaurants and bars proliferate. Hipsters follow. I recently came across my first Portland-like twentysomething white couple presenting themselves as homeless in downtown Durham. Condos are sprouting up all over. Ground was broken in 2016 on a 27-story building, the city’s tallest by nine stories.

Durham was incorporated in 1881, built around the booming tobacco industry: Washington Duke was to tobacco what Andrew Carnegie was to steel. The city that took root and grew was more progressive than most. For example, the country’s first black-owned bank and insurance company were in Durham. Booker T. Washington visited in 1910 and praised the city’s black middle class, whose economic activities were centered in a part of town that would be known as “Black Wall Street.”

The city directories from 1910 and 1930 reveal the white-owned and black-owned sides of town to be near-mirror images of each other: grocery stores and department stores, fine jewelry and clothing stores, restaurants and cafes, theaters and social clubs, banks and insurance companies flourished on both sides of town. Durham became one of the capitals of African American culture in the South, if not the country. A distinct style of music, the Piedmont blues (played by Blind Boy Fuller, Reverend Gary Davis, Sonny Terry, among many others), thrived here, its syncopated, rag-like dance beats indicative of a festive culture. 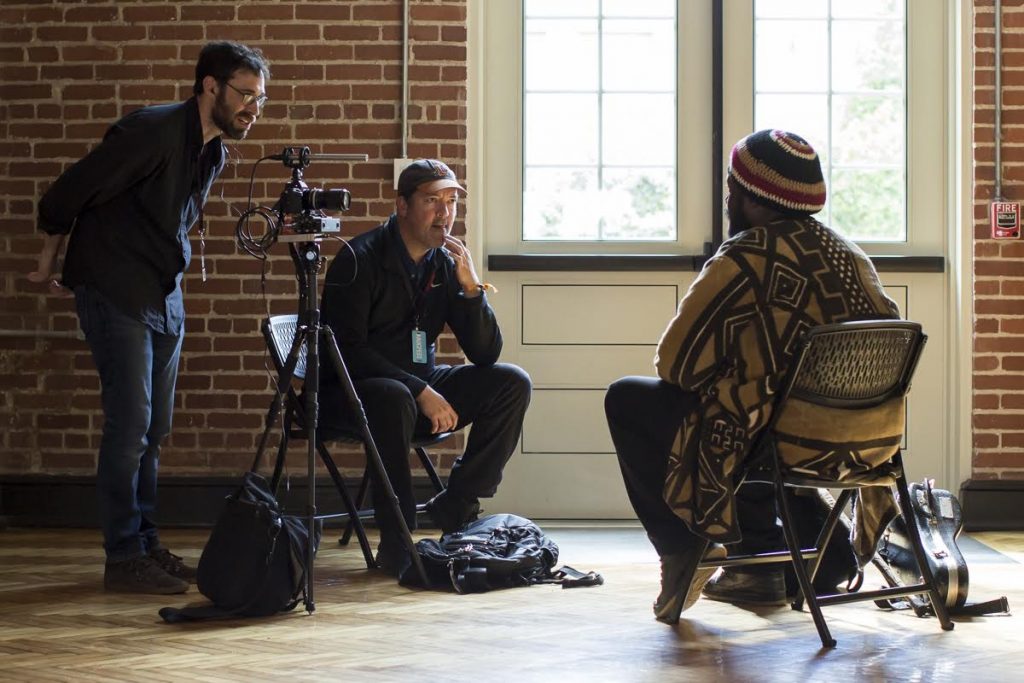 I met the visual artist Jim Lee at a downtown cupcake shop, figuring it wouldn’t be crowded in mid-morning. Sure enough, the shop wasn’t even open for business yet. The staff let us in anyway and generously served us hot tea and coffee while we chatted.

Lee was born in Durham in 1940 and grew up here. In the 1950s he played in the same segregated junior tennis circuit as Arthur Ashe of Richmond, Virginia, once losing to the future Wimbledon champion 1–6, 4–6. Over the last several decades Lee has led a remarkable life that included translating Russian military radio while living in Turkey during the Cold War, starting a community radio station, working on a farming cooperative, and serving as director of operations at Malcolm X University. His artwork often reflects his longstanding interest in nature and science.

Lee told me, “That mirror you found in the city directories was curved, it was concave. The reflection on the black side of town was smaller and more impoverished. It was a matter of scale and power. The institution of segregation ran deep. I love tennis but if I’d tried to play on the city-owned courts in Forest Hills [a prominent white neighborhood], somebody would have called the police.”

“There have been advances and improvements since then, of course, but the power inequity might not be that different. I’m both excited and worried by the new growth of Durham. It provides for an interesting study of I’m not sure what. The energy to make Durham more cosmopolitan, I’m afraid, is resegregating the community. It seems to be becoming richer and whiter. I hope I’m wrong.” 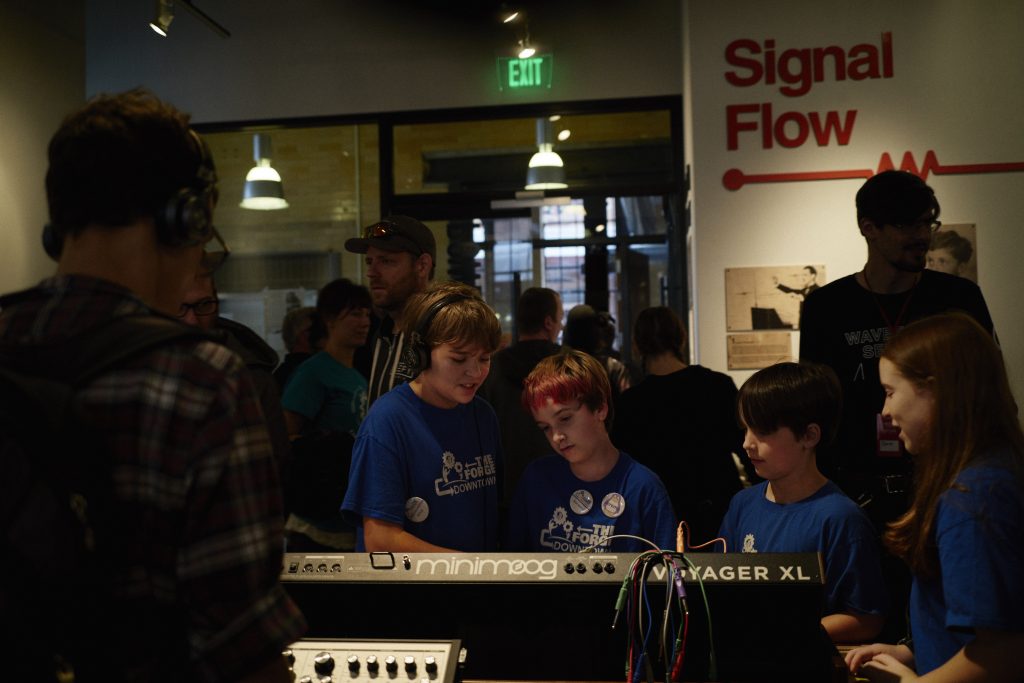 Today in downtown Durham, gift shops sell “Black Wall Street” T-shirts and hats. The carefully tended independent bookstore on Main Street, Letters, receives more queries about books on Black Wall Street than any other topic (oddly, that book waits to be written). The diverse history is a source of pride for locals and a curiosity for newcomers.

In the 2008 Presidential election, Barack Obama won 76 percent of Durham County’s vote to 24 percent for John McCain. The two adjacent counties that together form North Carolina’s “Triangle,” Wake (home to Raleigh) and Orange (Chapel Hill), also gave Obama 57 percent and 72 percent of the vote, respectively. The numbers from those three counties combined are only a few points lower than those combined for New York City’s boroughs. Hillary Clinton’s numbers against Trump in 2016 were similar. This is one of the classic blue bubbles on the American landscape. But even here Cicely Mitchell had to struggle for equal treatment for her festival.

Currently, the radically conservative, mean-spirited workings of the gerrymandered North Carolina state legislature draw national attention. But if you look back through newspapers from the month of May in past years, you can find similar paradoxes and haunting echoes.

On May 6, 1861, at the dawn of the Civil War, there is an advertisement for vegetable seeds—asparagus, cabbage, eggplant, endive, various peas and peppers, rhubarb, spinach, squash, and turnip—resembling a menu from Durham’s nationally acclaimed restaurant scene today, including the quaint typescript.

The same paper contained an advertisement for a “musical concert” to be given by the “Ladies of Hillsborough” with proceeds going to the Orange Brigade, a local troop in the Confederate Army. Classified ads that day also called for citizen help finding “escaped slaves.”

Skipping ahead a century to the morning paper of May 20, 1963, under the headline of “Brief Scuffles,” there is this report: “More than 400 Negro demonstrators were arrested here Sunday at Howard Johnson’s Restaurant on Durham-Chapel Hill Boulevard as the anti-segregation demonstrations struck at racial barriers in Durham public eating establishments for the second straight day.” The article goes on to state, “Five Trailways buses were used to carry chanting, hand-clapping demonstrators to jail.”

The private buses were public rentals, the deliberation of the arrests chilling, but sadly not hard to imagine in today’s statewide and national political and cultural climate.